Priyanka Chopra called her husband, Nick Jonas, the ‘love of my life’ in the caption for a post that was shared to her Instagram account on Thursday.

In the shot, the 39-year-old actress was seen holding her spouse and leaning over his right shoulder as the Jonas Brothers members planted a kiss on his wife’s cheek.

The former Miss Universe and her husband have been romantically connected ever since 2018, when they began dating, became engaged and held their wedding ceremony all in the same year.

Special day: Priyanka Chopra called her husband, Nick Jonas, the ‘love of her life’ in the caption of a post that was shared to her Instagram account on Thursday

Chopra sported a flowing yellow maxi skirt and a matching long-sleeve top while spending time with her husband.

The Quantico star paired her outfit with a matching set of hoop earrings that beautifully contrasted with her voluminous dark brown hair.

Jonas kept it casual in a long-sleeve t-shirt as he kissed his wife’s cheek in the shot.

The hitmaker also wore a pair of slim-fitting black pants that were offset by a set of stark white sneakers. 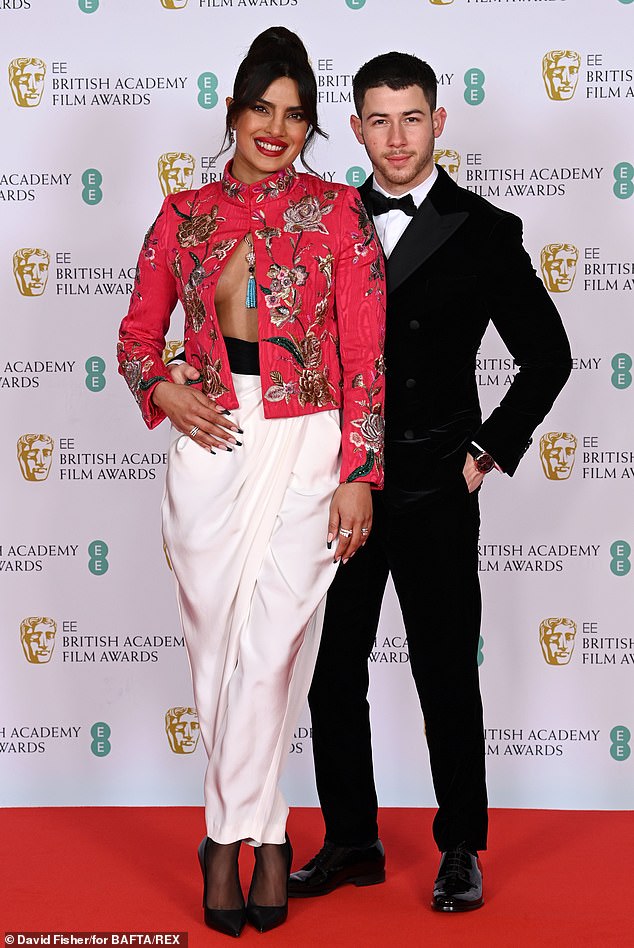 High praise: The Quantico star also wrote that her husband was the ‘the kindest most compassionate loving person I know’; they are seen at the 74th British Academy Film Awards in April

Chopra also wrote a message that was directed at her husband, where she informed him about how much she had changed her life.

‘Love of my life. Here’s wishing the kindest most compassionate loving person I know a very happy birthday. I love you baby..Thank you for being you,’ she noted.

Jonas also reposted the same image to his own account and wrote a short message that read: ‘She surprised me for my birthday. She’s the best.’

The pair initially met in 2016 when they were placed in contact by a mutual friend, and the singer sent his now-wife a message through Twitter to initiate a conversation. 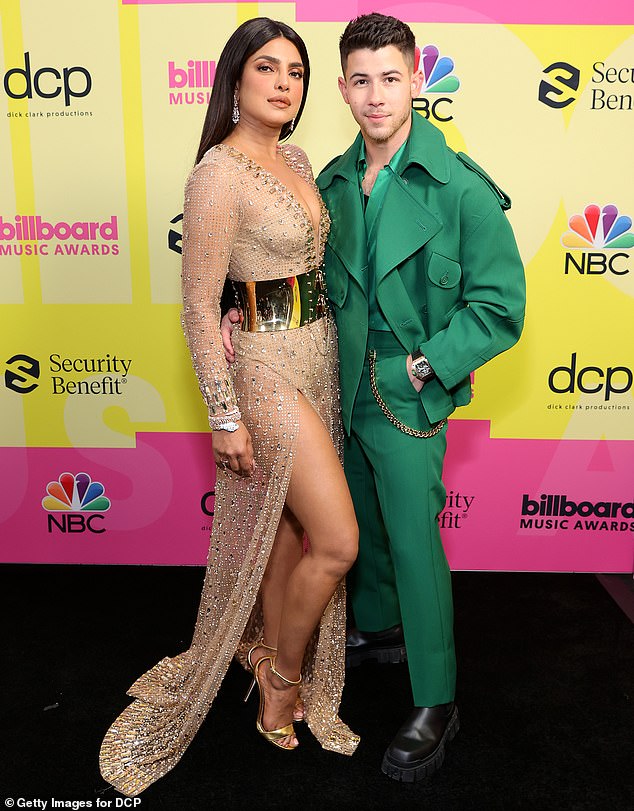 Starting off strong: The happy couple was initially connected by a mutual friend in 2016, and Jonas reached out to his future wife through Twitter; they are seen at the 2021 Billboard Music Awards

Chopra previously told Harper’s Bazaar that she was attracted to the musician after watching one of his steamy music videos.

‘I decided to date him after seeing the video for Close, where his shirt comes off. So that song is my favorite,’ she remarked.

Prior to becoming involved with his partner, Jonas was romantically linked to figures such as Olivia Culpo and Lily Collins, with the former starring in one of his music videos.

The pair went on to make their red carpet debut at the 2017 Met Gala, although neither confirmed that they were dating at the time. 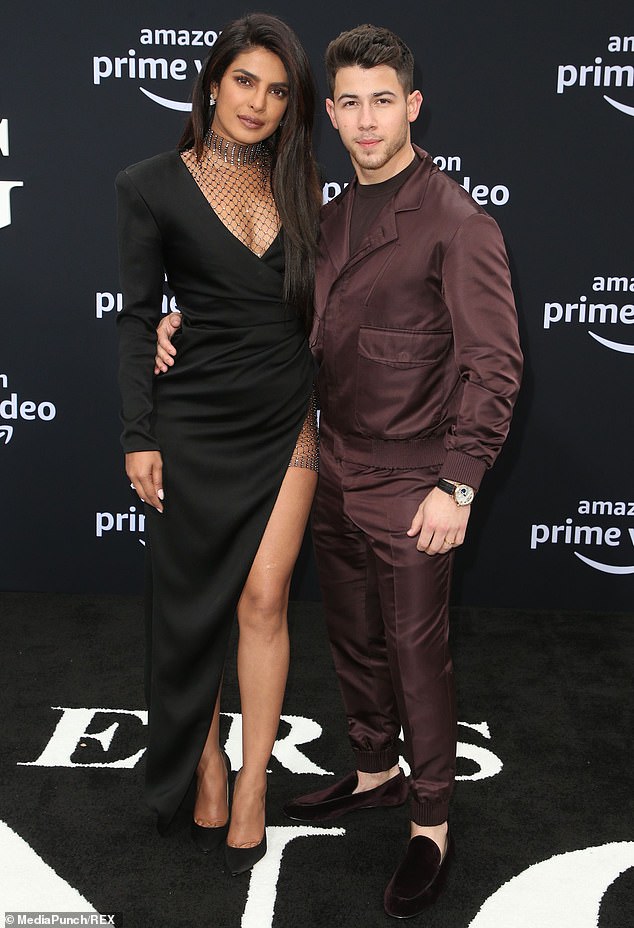 Steamy: Chopra previously told Harper’s Bazaar that she ‘decided to date him after seeing the video for Close, where his shirt comes off’; they are seen in 2019

Although the two spent an extended period of time apart, they reconnected in 2018 and began officially dating that year.

Jonas went on to shock many of his fans when he revealed that he had popped the big question to Chopra after just months of dating.

The couple did not remain engaged for very long, as they tied the knot during a three-day ceremony that was held at the Taj Umaid Bhawan Palace in Jodhpur, India, that began that November.

The performer’s wife went on to appear in the music video for the Jonas Brothers’ track What A Man Gotta Do, which featured all three of the siblings’ respective partners.

Chopra and Jonas have appeared on each other’s Instagram accounts multiple times since the beginning of their marriage. 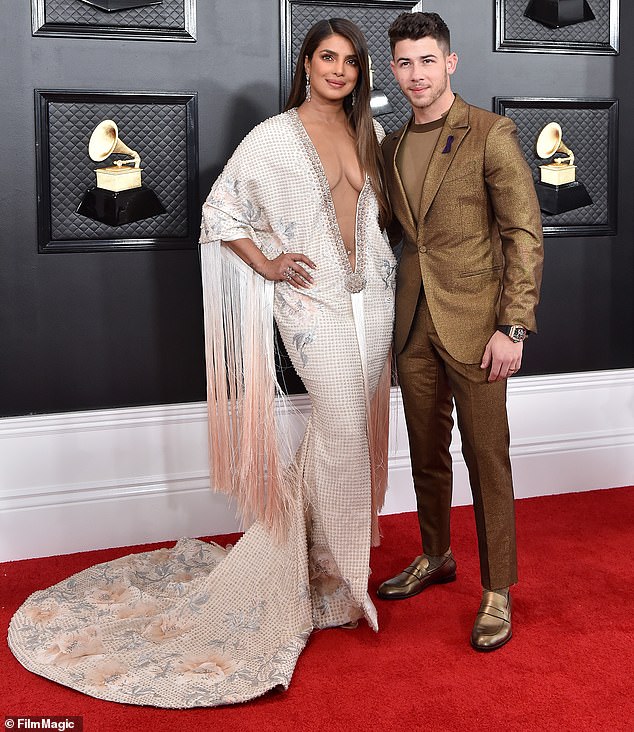 Taking their time: The pair tied the knot during a three-day wedding ceremony that was held at the Taj Umaid Bhawan Palace in Jodhpur, India, in 2018; they are seen at the 62nd Annual Grammy Awards in 2020