Producer Trevor Horn tells Event about the loss of wife, feuds with musicians and his new album

Trevor Horn’s phenomenal achievements as the most innovative record producer of modern times were cast into shadow during the summer of 2006 when his wife, manager and business partner Jill Sinclair was accidentally shot in the grounds of their Oxfordshire manor house.

Horn, who created a soundtrack to the Eighties, imbuing music by ABC, Frankie Goes To Hollywood and Grace Jones with a futuristic allure, was left devastated by the nightmarish incident.

Trevor Horn in The Buggles with Geoffrey Downes. One song that has eluded Horn so far in his career is a Bond theme

Home from college, their son Aaron was target-practising in the garden with an air rifle and, unaware that his mother was near, hit her in the neck. The 4.5mm pellet severed an artery, causing irreversible brain damage due to oxygen starvation. Sinclair was rushed to the Royal Berkshire Hospital in a critical but stable condition, but there was no chance of recovery. Three months later, Horn confirmed that his wife was in a natural coma and had been relocated to a rehabilitation centre.

In 2012 Horn reported that his wife was now conscious but ‘she cannot speak, move or smile,’ adding, ‘the only expression she can show is of discomfort’. Two years later she ‘passed peacefully’ at the family’s London home, aged 61, from cancer. Horn remembers her as ‘an inspiration’ and a ‘maverick spirit’ who he misses ‘terribly, every day’.

Sitting in the front room of the Primrose Hill house, Horn reminisces warmly about Sinclair, once described as ‘one of the most successful people in the British music industry’. He doesn’t go into detail about the tragic accident’s aftermath other than saying ‘it drew the family close together’. His son Aaron, now 35, one of Horn and Sinclair’s four grown-up children, has become an in-demand musician and producer in his own right. Horn describes him as ‘calm, less excitable than me’.

Shortly after the fourth anniversary of his mother’s death, Aaron posted a touching tribute on Instagram. ‘Jill was the absolute Don!’ he wrote, going on to list her professional achievements over the years. ‘All this and an amazing mother, gardener and lover of dogs.’

The bouncer wouldn’t let me into the Band Aid recording. It’s the only time I’ve said, ‘This is my studio, and I’m Trevor Horn’

Sinclair was revered, feared even, in a notoriously tough industry. ‘The record business can be a bit of a boys’ club,’ says Horn. ‘But Jill liked to hang with the guys, she charmed all the gangsters. She had more balls than most men,’ he laughs, then removes his trademark spectacles and rubs his eyes sadly. ‘She could be tough but very warm at the same time. She ran everything and that allowed me to remain in my little recording bubble.’

It was Sinclair who, in 1979, told Horn that he would never make it as a pop star but had all the attributes to become the best record producer in the world. Horn had been fronting The Buggles – ‘a sort of robot version of The Beatles, that was the idea anyway’, he murmurs in a soft Durham accent – and had a worldwide hit with Video Killed The Radio Star, the first video to be shown on MTV. But Sinclair, a former maths teacher and now a recording studio manager, had other plans for him and promptly arranged his first production deals with Dollar and ABC.

He would go on to create the epic soundscapes that became synonymous with the decade that enjoyed ‘excess all areas’, winning three Brits, a Grammy for Seal’s Kiss From A Rose and an Ivor Novello Award for Outstanding Contribution to British music. 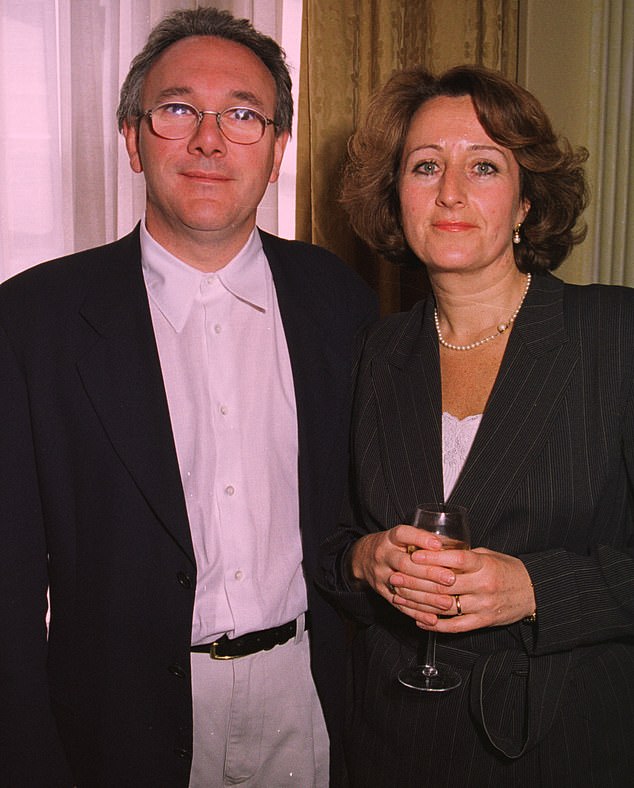 Trevor Horn with his wife Jill Sinclair in 1998. Horn remembers her as ‘an inspiration’ and a ‘maverick spirit’ who he misses ‘terribly, every day’

His new album, Reimagines: The Eighties, shines a new light on some of the era’s best-loved songs using symphonic arrangements, often to moving effect. Guest vocalists include Robbie Williams, Seal and Gabrielle Aplin.

The song evoked mixed emotions for Horn. Having made Relax and Two Tribes massive in 1984, he and Frankie frontman Holly Johnson fell out. The two men haven’t spoken since Johnson won a bitter two-year high court contractual dispute in the late Eighties.

‘I never really tried to rebuild bridges with Holly,’ shrugs Horn. ‘I haven’t seen him, our paths don’t cross. I think they [Frankie] have missed an opportunity. They could be touring now and make a lot of money.’

Johnson claimed that he had attempted to contact Horn after Jill Sinclair’s death only to receive word from the producer’s secretary saying that his message of condolence would be passed on. ‘I think my problem with Holly dated back to me being a bit sharp with him once in the studio,’ Horn confesses. ‘It came up in the court case. When you’re a producer you can’t ever afford that.’ 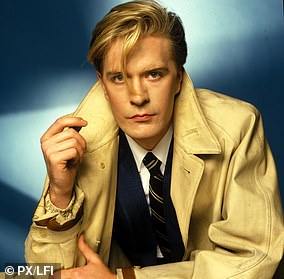 So atmospheric and romantic that Madonna walked down the aisle to it, at her wedding to Sean Penn.

Horn also had a minor contretemps with the mercurial Grace Jones, after they had enjoyed global acclaim with Slave To The Rhythm, and attempted to make peace with the feisty performer by offering her a slot at his star-studded 2004 Prince’s Trust Show at Wembley Arena, celebrating Horn’s 25th anniversary as a producer. ‘I knew she was cross with me but I asked her to perform and she said, “I’ll do it, but it’ll cost ya!” I said, “Cost me how? In my soul, in my spirit or in my wallet?” She screeched back, “All of ’em!” And we both cracked up laughing and we were friends again. You don’t want to upset Grace.’

Another client, Robbie Williams, regards Horn as ‘a genius’ and first collaborated with the producer in 2009 on his Buggles-referencing Reality Killed The Video Star album and again last year for Horn’s Reimagines album. ‘I asked Robbie, “When do you prefer to work?” and he said, “Friday,”’ Horn grins. ‘And that was great for me, I knew where I stood. I could work on the tracks all week, then he’d come in on the Friday, up for it and ready to sing.’

In less leisurely fashion, the Band Aid single, Do They Know It’s Christmas? was recorded at Horn’s Sarm West studio, a deconsecrated church in Notting Hill, London, in a marathon 24-hour session (he later remixed the 12in version). ‘During the recording, Jill called me and said, “You’d better get down here,”’ Horn says. ‘When I got to the door, there was a bouncer there who wouldn’t let me in, on account of all the celebrities inside. It’s the only time in my life I’ve said, “This is my studio, and I’m Trevor Horn.”’

Laughter reverberates around the room. A double bass propped in the corner bears testament to Horn’s classically trained past and his stints as bassist and vocalist in the progressive rock band Yes. Despite a reputation as a studio nerd, Horn insists that he isn’t technically minded and ‘is all about the lyric and the emotional impact of the song.’

One song that has eluded Horn so far in his career is a Bond theme. ‘I’d do it,’ he nods enthusiastically. ‘Although I don’t know who I’d get to sing it if I was asked. Nobody is going to compare to Shirley Bassey.’

I suggest he could produce a Bond theme sung by Bob Dylan, and he launches into a hilarious rendition of Goldfinger, drawled Dylan-style. ‘Bob does Bond,’ Horn hoots.

With great sadness but bone-dry wit, Horn tweeted in 2017 that his luxurious residential studio Sarm West Coast LA had burnt to the ground in a southern Californian wildfire. ‘The studio caught fire, not musically as it had done in the past 20 years, but physically.

‘We lost everything,’ Horn reflects. ‘It was awful. I still find myself reaching for a favourite guitar before I realise, “No, that’s gone…”’

Lest the sonic wizard is starting to sound somehow cursed, there has been some good news in the Horn household in recent years.

His daughter Rebecca, 27, has become his son, Will. ‘He’s much happier now,’ his dad says of the transgender success. Will, who recalls that his mother’s accident ‘changed everything’, married last year, where the father of the groom made a ‘beautiful speech’.

Now 69, Horn has a girlfriend but no plans to remarry. He is socially active and regularly runs into former clients who have benefitted from his production fairy dust. Rod Stewart, for whom Horn produced the chart-topping hit Downtown Train, greeted him at a dinner in a very intimate manner, giving the legendary ‘knob twiddler’ pause for thought.

‘Rod must have had a couple of drinks. He came up behind me, shouted “Trevor ’Orn!”, then reached his hand down between my legs and grabbed me by the privates. I hadn’t had someone do that to me since I was at school. But that’s Rod – he doesn’t give a monkey’s.’

At a more civilised function in 2011, Horn was appointed a CBE by Prince Charles. ‘I’m going to get it put on my passport,’ Horn declares proudly. ‘I’ve started incorporating it in my signature, and it looks great.’ But he is keen to acknowledge that the honour also belongs to his beloved partner Jill. ‘Would my getting a CBE have made her a Dame of the British Empire?’ Horn enquires genuinely. Technically, it wouldn’t, but to him she was already a Queen. ‘That’s true,’ Horn beams, his ‘death-defying love’ – as the song has it – strong as ever. ‘Jill was quite a woman.’

‘Reimagines: The Eighties’ by Trevor Horn is released on Friday