A ‘professional cuddler’ has clients queueing up to pay £75 – for an hour-long hug.

Trevor Hooton, 30, who is non-binary and goes by ‘Treasure’ set up their business several months back – which offers ‘cuddle therapy’.

Treasure, who is based in Bristol, charges £75 for an hour-long cuddle session.

Their business, ‘Embrace Connections’ also offers other services including ‘connections coaching’ to help people struggling to build relationships with others.

Treasure explained what they offer is more than just a hug – it’s about ‘pouring care, affection and goodwill into someone through touch’.

They admitted not everyone understands exactly what the business offers – with some even mistaking it for sex work.

Bristol based Trevor Hooton, 30, who is non-binary has clients queueing up to pay £75 – for an hour-long hug. 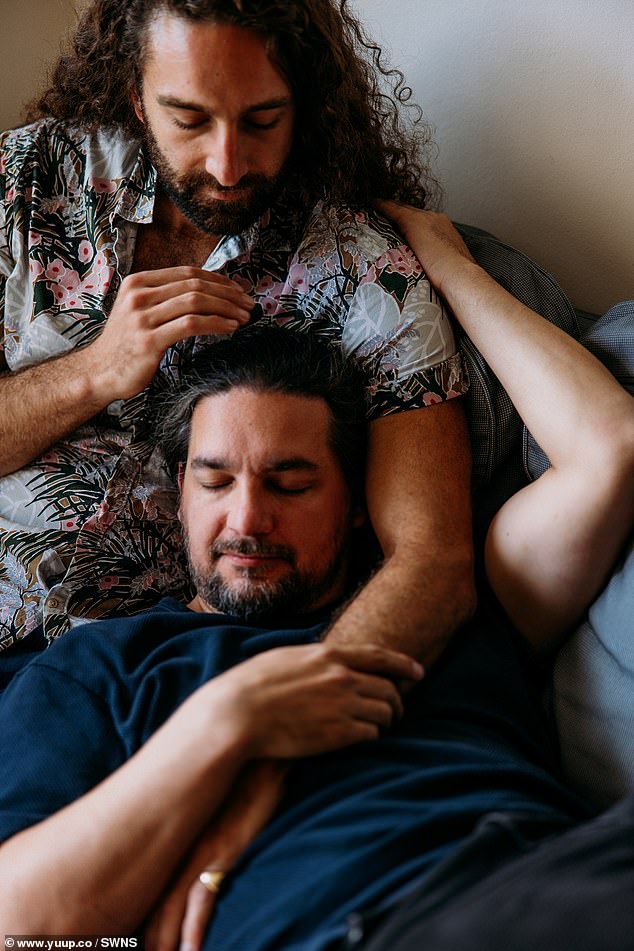 Treasure said their method s designed to ‘pour care, affection and goodwill into someone through touch’ and insisted there’s nothing sexual about it

But they say professional cuddling is not as novel a concept as it seems, and reckons everyone should consider it.

Treasure, who is originally from Montreal, Canada, said: ‘I built a business based on my passions for building human connections.

‘Many people struggle to make those and that’s where I step in – it’s more than just cuddling, it’s giving people the things they need, whatever that might be. 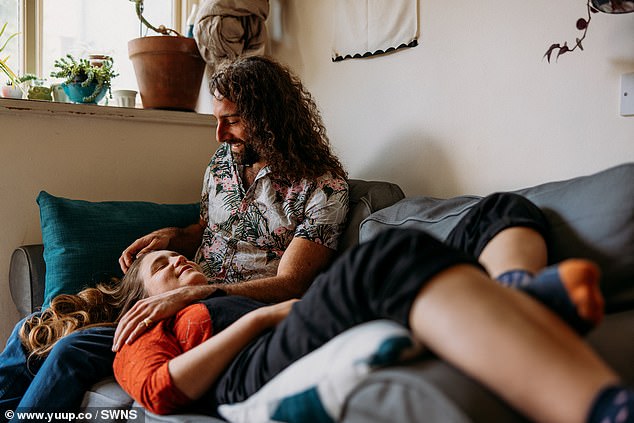 Treasure, pictured with a client, said that they were inspired to set up a business offering cuddling sessions because they are passionate about ‘building human connections’ 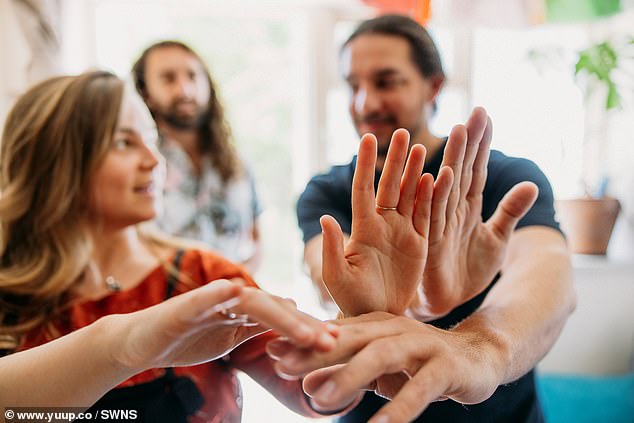 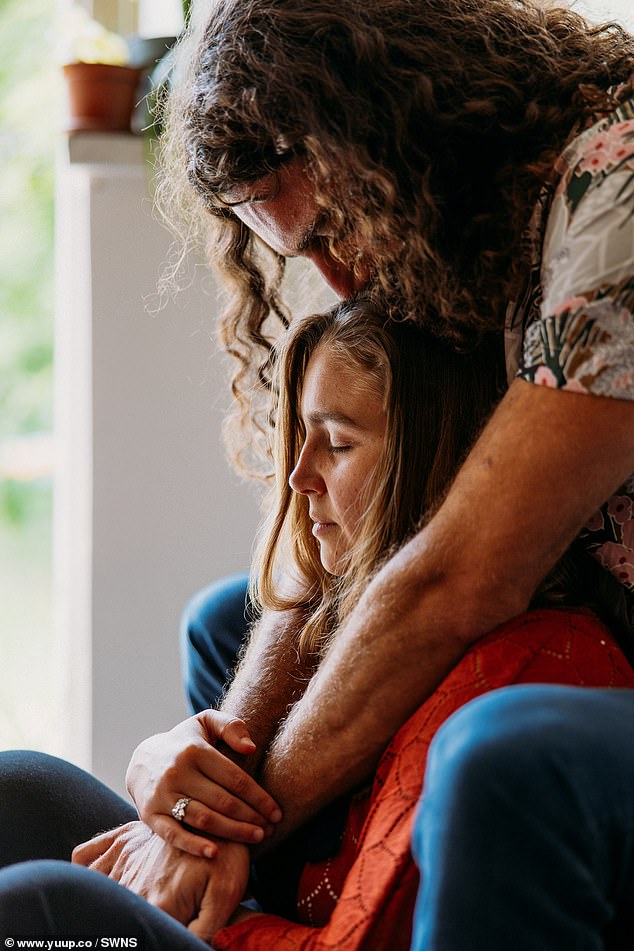 ‘Some people do find it a little awkward at first, but that’s totally normal, and they quickly feel comfortable.

‘People should ask themselves ‘if you could have an hour to do nothing but feel cared for, supported and loved, how would it make you feel?’

Treasure first began looking into the science behind human connections ten years ago, and they found it fascinating.

But it wasn’t until last year that they began working to turn it into a business, which they launched in May 2022.

‘Embrace Connections’ offers a range of different services – including its most popular, ‘connections coaching’ – a session which aids your ability to build relationships with others.

But the one which fascinates people the most is ‘cuddle therapy’ – where people pay £75 for an hour’s cuddle session.

Describing the service, Treasure said: ‘It’s always a non-sexual, platonic intimacy, based on whatever the person wants.

‘We meet, go over guidelines to ensure we’re on the same page, and then structure the session based on what they want and their boundaries.

‘There is a lot of checking in to see how they feel and what they want – whatever helps them to feel safe and calm.’ 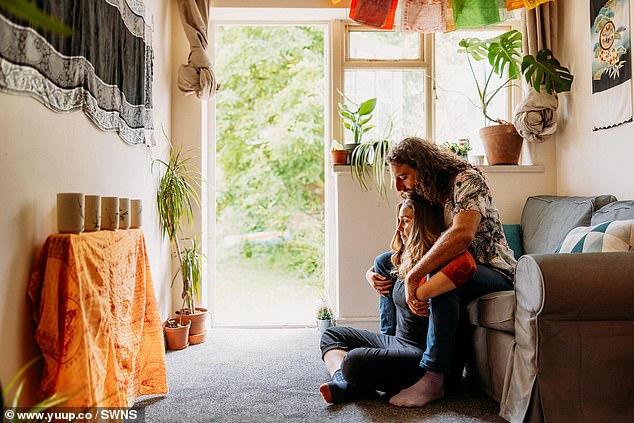 Treasure said that their service is never sexual and that if someone starts to feel that way during the session, they they discuss it together

They told how the unusual service is different for everybody – and it can take some work to find the most effective approach.

They even confessed it can be a little uncomfortable at first – but that it is worth it in the end.

Treasure explained: ‘It can be awkward, it’s a weird thing and not typical for most people to step into being intimate with a stranger.

‘People come with their own insecurities or preconceptions but I do my best to help find a place where they are comfortable.

‘And if the person starts to feel the start of something sexual, we communicate about that and back off, because it needs to be non-sexual intimacy.’

While the £75 service may sound unappealing to some, Treasure explained there’s a lot more to it than just hugging a stranger.

They have had to learn the theory behind it – including both the psychological and medical background. 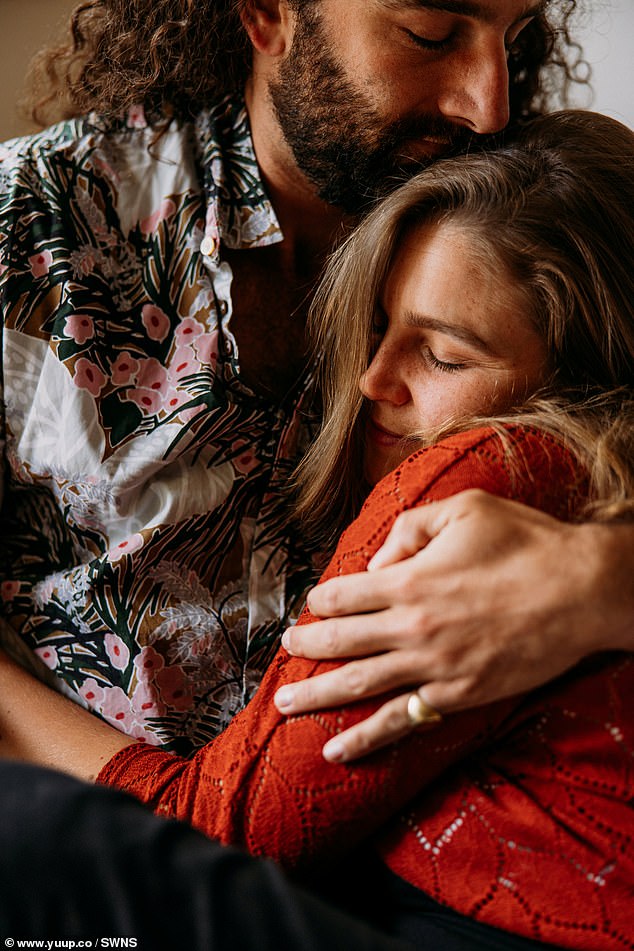 Treasure said that the cuddling sessions enable clients to feel safe and calm, but said that naturally people can start off feeling uncomfortable

Treasure said: ‘It’s about communication and building trust – when you hire a cuddle therapist, you are hiring their time, attention and care.

‘When I am giving a hug to someone, I’m pouring in care, affection and goodwill through that touch.

‘Hugging a stranger doesn’t do much, it has to be someone who cares about you.’

In fact, Treasure reckons people are missing out not knowing the service is out there – and in fact, professional cuddling it ‘not a novel service’.

It’s also not the only service they offer – their connections coaching sessions come at £90 for 90 minutes, pair massage classes for £120 for 90 minutes, and individual or couples’ AcroYoga at £60 for one hour.

But Treasure reckons more people would be interested in cuddle therapy – or one of their other offerings – if people knew more about it and what it really is.

They said: ‘People have mistaken what I do for being an escort service, or prostitution.

‘I can understand people might think it, but that’s not what I do. 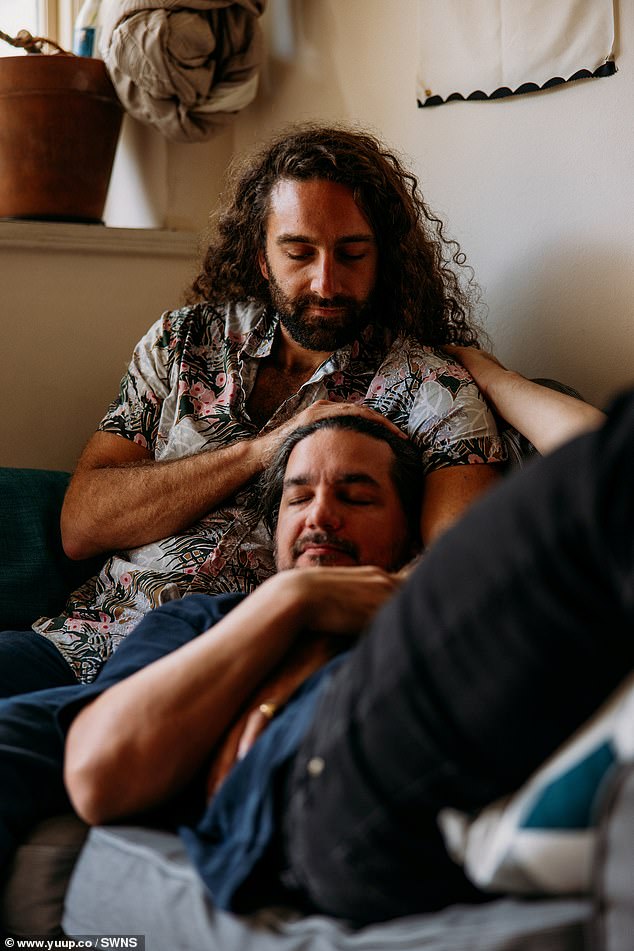 Treasure said that clients who come to them are paying for ‘time, attention and care’ and not just physical touch

‘If someone is on the fence about whether to give it a go, I’d tell them to ask themselves this:

‘If you could have an hour to do nothing but feel cared for, supported and loved, how would it make you feel?’

While Treasure has only been working on Embrace Connections full time for a few months, they say they are ‘confident’ it will become a success as they expand the list of offerings over time.