Australians whose skills are in short supply are getting the best pay rises in eight years as the border stays closed to migrant workers for now.

Overall pay levels in the year to September grew by 2.2 per cent – the equal-fastest pace since March 2020, new official data showed.

Private sector workers had the best pay increases since 2014 but public servants missed out as a result of government-imposed wage freezes.

Some occupations, where skills are in short supply, benefited from the closure of Australia’s border to foreigners.

Professional, scientific and technical services specialists enjoyed a 3.4 per cent pay increase, the best rise in more than eight years.

IT technicians command salaries in the six figures, well above Australia’s average, full-time wage of $90,329.

Construction workers also had a better-than-average pay increase, with their wages going up by 2.6 per cent – the best in seven years.

Private sector workers enjoyed a 2.4 per cent pay increase, the best annual increase since the end of 2014, compared with just 1.7 per cent for public sector professionals.

Accommodation and food sector workers had a better-than-average 2.5 per cent increase, despite being the worst affected by lockdowns.

Many hospitality businesses are struggling to find staff since lockdowns ended as many workers changed industries or went back to their home countries.

‘Reduced labour supply and the outflow of temporary migrant workers amid international border closures have supported wage growth over the past year,’ he said. 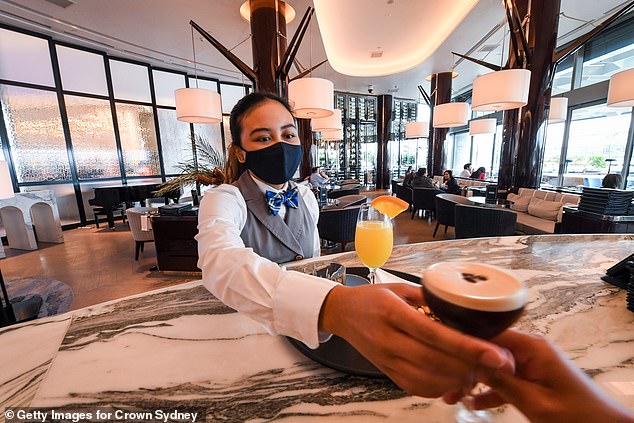 Hospitality workers in the accommodation and food sector had a better-than-average 2.5 per cent increase, despite being the worst affected by lockdowns. The National Minimum Wage increase by 2.5 per cent on July 1, taking weekly pay up to $772.60 or $40,175 a year (pictured is an attendant at Crown casino in Sydney)

‘Encouragingly, wage growth is starting to accelerate in those parts of the economy most exposed to labour shortages – and with the flexibility to adjust the wages of their employees,’ she said.

Nonetheless, the overall wage price index, as measured by the Australian Bureau of Statistics, remains well below the long-term average of three per cent, continuing a long-run of weak pay rises going back to mid-2013.

The Reserve Bank of Australia is not expecting pay levels to return to the three per cent mark until 2023, even though it is forecasting unemployment falling to four per cent by then for only the second time since 1974.