This is even though plots tend to promote the image of ‘a perpetually young and beautiful woman’ who strongly depends on men, despite her talents or professional success.

The study participants were mostly familiar with Fifty Shades of Grey, by E.L. James, published in 2011.

But the study authors suggest this is not really the case in the era of Fifty Shades.

– Maureen Dowd (The New York Times): ‘Like a Brontë devoid of talent’ … ‘dull and poorly written’

– Sheehy, Christine (The New Zealand Herald): ‘Will win no prizes for its prose’… ‘there are some exceedingly awful descriptions’

– Lisa Schwarzbaum (Entertainment Weekly): ‘In a class by itself’

– Laura Barnett (The Daily Telegraph): ‘The definition of a page-turner’

In December 2012, it won both ‘Popular Fiction’ and ‘Book of the Year’ categories in the UK National Book Awards.

‘We attribute this finding primarily to the respondents’ more traditional views of male and female gender roles.’

Fifty Shades of Grey was followed by two sequels in 2012 – all of which were made into films that collectively made over $1.3 billion at the worldwide box office.

The series was also complemented by spin-off novels in 2016 and 2017, with a third set to be published next month.

The original trilogy sold around 150 million copies and was translated into 52 languages – exceeding even the sales figures of J.K. Rowling’s Harry Potter books in terms of paperback editions.

But according to the researchers, no-one has been entirely sure why the series become so successful, especially considering so many of the contemporary and retrospective reviews were mixed – unlike the Harry Potter series.

In the media, contemporary erotica is typically dismissed as being of low literary value, and critics and scholars tend to classify its readers as having mediocre to poor taste.

The Fifty Shades trilogy has in particular been singled out for criticism – upon its publication, Maureen Dowd in The New York Times said it was ‘like a Brontë devoid of talent’ and ‘dull and poorly written’. 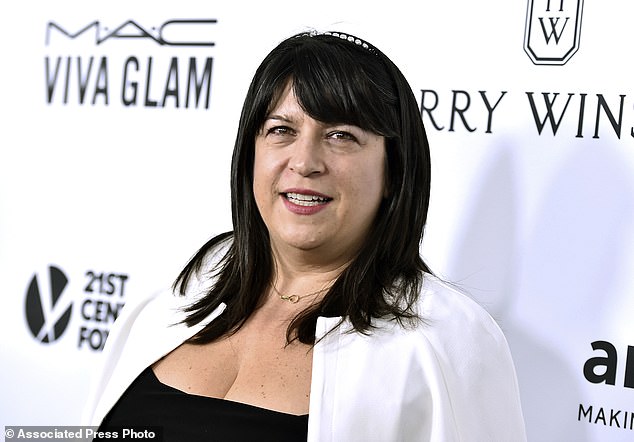 Pictured, E.L. James, author of the Fifty Shades of Grey series, at an event in Los Angeles in 2015

As recently as 2017, Digital Spy called the book series ‘creepy’ and ‘melodramatic’, terrible for women’, ‘crassly materialistic’ and ‘an ongoing crime against the written word’.

They collected data including demographic information, such as age, educational level, professional occupation and relationship status, as well as reading habits, including tendencies to share and discuss one’s reading experiences with others.

The majority of respondents were heterosexual women in stable relationships with an above-average level of education, the academics found.

They described themselves as being enthusiastic frequent readers who enjoyed sharing their reading experiences with others. 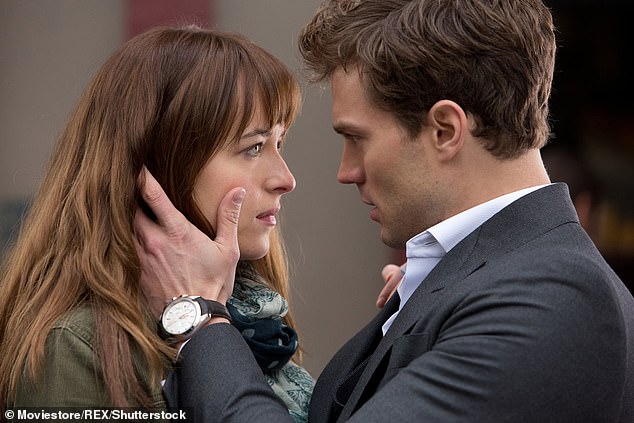 Dakota Johnson and Jamie Dornan starred as Ana and Christian in the films, the first of which premiered in 2015. Pictured is a still from Fifty Shades Of Grey (2015)

The sexual explicitness of the novels and their potential to provide guidance in life did play a role, but turned out to be less important than suggested in previous research, according to the team.

‘Notably, famous literary examples, such as Nabokov’s Lolita, were hardly ever mentioned,’ the team say.

The full findings of the study have been published in the journal Humanities & Social Sciences Communications.

Fifty Shades of awful! Some of the worst dialogue from the series

‘Desire explodes like the Fourth of July throughout my body.’

‘He laughs and then is distracted by his BlackBerry, which must be on vibrate because it doesn’t ring.’

‘He has a hotline to my groin.’

‘Desire pools dark and deadly in my groin.’

‘You said you loved me,’ he whispers. ‘Is that now in the past tense?”

‘My anxiety level has shot up several magnitudes on the Richter scale.’

‘I was serious about marrying you. We can get to know each other then.’

‘In her pale pink, frothy baby-doll dress and killer heels, she towers over me like a Christmas tree fairy.’

‘I bury my hands in his hair, holding him to my mouth, consuming him, my tongue as avaricious as his.’

‘I don’t think my heart could stand the strain of another e-mail like that, or my pants for that matter.’

‘Christian insisted on drying my hair – he’s quite skilled at it.’

‘He places the tie around my neck, and slowly but dexterously ties it in what I assume is a fine Windsor knot.’

‘He is an exceptional lover, I’m sure – though, of course, I have no comparison.’