A projection defending rapper Kanye West’s anti-Semitic remarks was beamed onto the side of an arena hosting a college football game Saturday night.

It was then apparently moved to beam on the side of a nearby skyscraper, causing outrage amongst the Jewish community in Jacksonville, Florida.

West, 45, has been on an anti-Semitic tirade since early October when he tweeted he was planning to go ‘death con 3’ on the Jewish people.

He has since continued to double down on his remarks in various interviews, blaming Jewish people for his mental health problems.

West gave his most recent interview Friday night – and refused to apologize for his remarks.

Brands including Adidas and Gap have dropped deals with the rapper over his anti-Jewish slurs, costing him an estimated billion dollars.

But his remarks have also seemed to embolden other anti-Semites, with several neo-Nazis pictured earlier this month standing on the 405 freeway overpass in Los Angeles with a sign reading ‘Kanye is right about the Jews.’

It remains unclear who beamed the message in Florida Saturday night, but it has since been widely condemned. 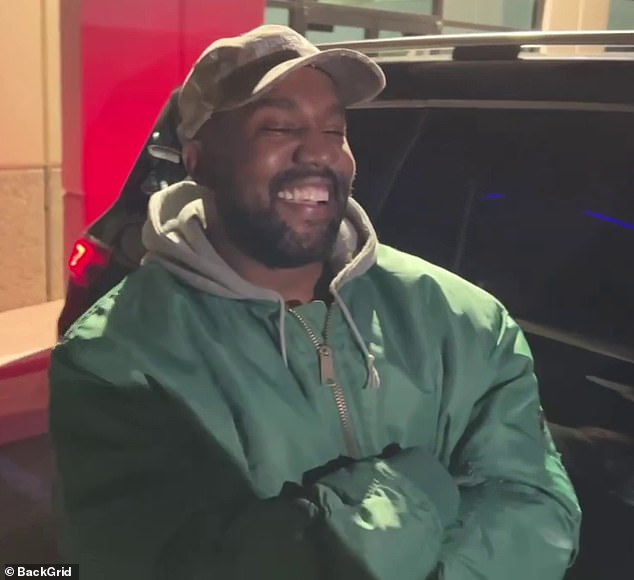 West, 45, has been on an anti-Semitic tirade since early October when he tweeted he was planning to go ‘death con 3’ on the Jewish people .

This was projected at end of Florida/Georgia game in Jacksonville. DeSantis was also at game and am sure he will say nothing about this as usual. pic.twitter.com/NIZF6m5ZGj

View from my hotel room just now. It was first projected onto the side of the wells fargo building and then stopped, and then moved down to this building. pic.twitter.com/fCQQC7FSMO

In a tweet on Sunday, Rep. John Henry Rutherford, who represents the area, blasted the comments.

‘The kind of anti-Semitic hate speech being circulated online purportedly from the Florida-Georgia game is despicable and extremely disappointing,’ he wrote.

‘There is absolutely no room for this sort of hate in Northeast Florida,’ the congressman continued, adding: ‘I continue to stand in support of the Jewish community in Jacksonville and across this nation.’

‘The University of Florida and the University of Georgia together denounce these and all acts of anti-Semitism and other forms of hatred and intolerance. We are proud to be home to strong and thriving Jewish communities at UGA and UF and we stand together against hate.’

‘The SEC denounces all forms of hatred and intolerance,’ it continued. ‘We take pride in the diversity of our campus communities and join the Universities of Georgia and Florida a we stand together against hate.’

Others, though, are calling on Gov. Ron DeSantis to issue a statement after he kicked off the game between the two rival schools.

DailyMail.com has reached out to DeSantis’ office for comment. 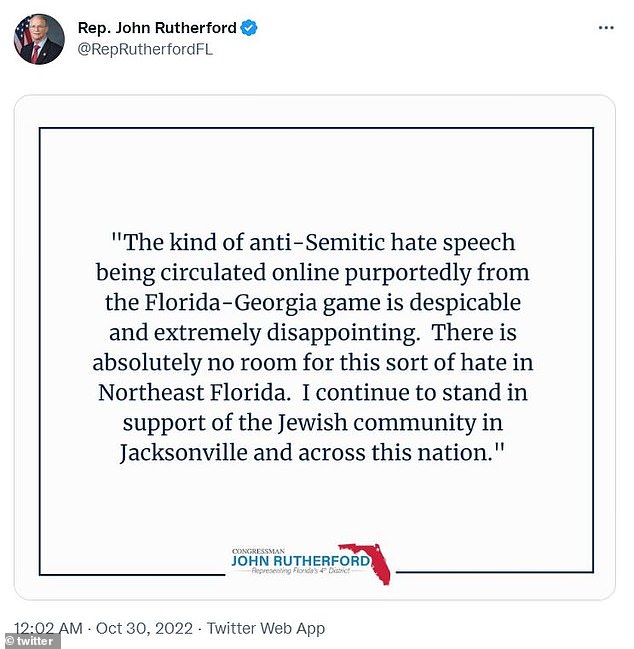 In a tweet on Sunday, Rep. John Henry Rutherford, who represents the area, blasted the comments projected onto the stadium 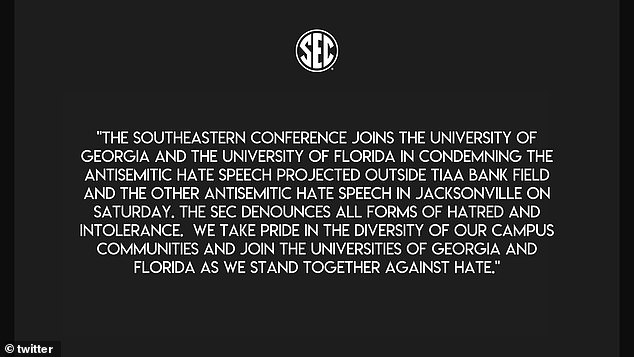 The anti-Semitic projection came just one night after Ye doubled down on his claim that Jews control the media and Hollywood.

Speaking with photographers Friday night, the rapper displayed a spreadsheet supposedly documenting the number of Jews currently in positions of power across the media.

The names weren’t visible, so it was impossible to verify West’s claims, but he named businesses including Disney, Paramount, USA Today and the Los Angeles Times as among those with Jewish staff members working at their highest echelons.

As he spoke with the press, West said that he had not formerly understood that it was anti-Semitic to observe that many of the business associates with whom he works and under his employ are Jewish.

When he was then asked if he should walk back some of his comments, he pulled out the list of executives and began reading the names of companies at which Jewish executives are employed.

‘The red are the executives that are Jewish at these companies,’ he said of the list on which most names are highlighted in red. 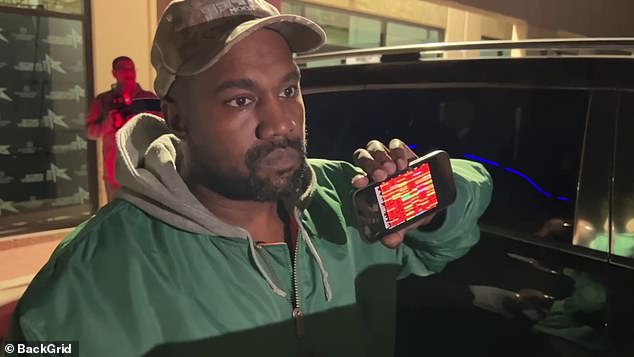 West, 45, doubled down on his anti-Semitic remarks on Friday, showing reporters and cameramen a list on Friday of Jewish executives at top media companies that the rapper believes are now targeting him

His remarks have seemed to embolden others with anti-Semitic views. A widely-circulated photo shows a group of people giving a Nazi salute on the 405 freeway overpass in Los Angeles with a sign reading ‘Kanye is right about the Jews’

He then went on to say that he’s ‘had experiences (with Jewish executives) where it felt like I was being teamed up on.’

West added that his de facto industry blackballing in the wake of his ongoing comments is ‘actually proving what I had to say’ – meaning, Jewish executives have made the decision to bar him from practicing certain sorts of business and therefore from having influence.

He then went onto say that years ago, when he was hospitalized for his mental health, a Jewish doctor misdiagnosed him with Bi-Polar disorder, leaked his presence at the hospital to the press, and attempted to control him with medication.

West has famously declined to take any mood-stabilizing drugs – despite his diagnosis.

He said that if a doctor were to mix up a pill of his, he could end up like Prince – who died by accidental fentanyl overdose – or Michael Jackson – who died by anesthesia poisoning.

The rapper didn’t apologize while making his remarks, but did say he’d been ‘humbled.’