Property investor RETCHES as sees rubbish-filled flat he bought for £85,000 – before transforming it

A property investor who took a ‘gamble’ on a ‘blind’ flat purchase was left retching as he was forced to wade through mountains of urine-soaked trash – before transforming it into a stunning luxury home.

Taylor Kay, 29, admitted he took a chance by forking out £85,000 in cash for the one-bedroom maisonette in Luton, Bedfordshire, when a fellow investor offered him the property.

The risk was that no-one was able to gain access to the property and so he was forced to make the purchase blind – with no idea of the condition of the flat until he got the keys and battled his way in.

The 29-year-old recorded his first entry into the maisonette, documenting the mounds of urine-soaked rubbish while he can be heard vomiting at the ‘disgusting’ smell.

Mr Kay said: ‘I got a phone call from being known for owning properties and being an estate agent in Luton and was offered this property.

‘I had no information on the property itself. We knew it was a maisonette but we didn’t know what it was like inside – how many bedrooms it had or how bad it was.

‘It was a bit of a gamble but the price was attractive enough to be able to take that gamble. 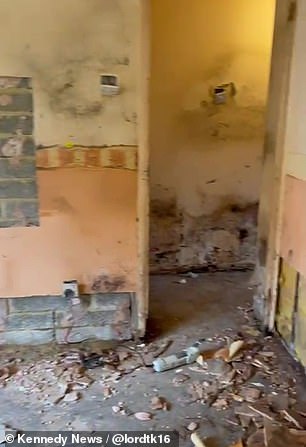 Taylor Kay took a ‘gamble’ on a ‘blind’ flat purchase in Luton, but was left with a mountain of a job when he had to strip the whole property and start from scratch

When Mr Kay tried to take a sneak-peek at the property he couldn’t see through the windows as they were covered up, so he went around the back to see the overgrown garden with falling down fences – it was at this point he knew ‘it wasn’t going to be in great condition.’ 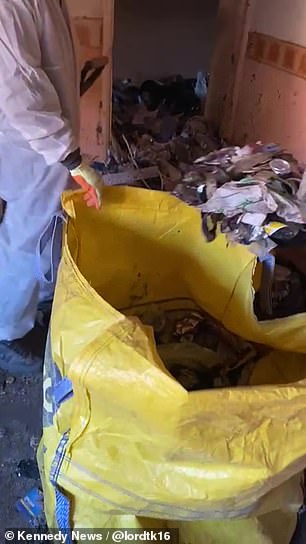 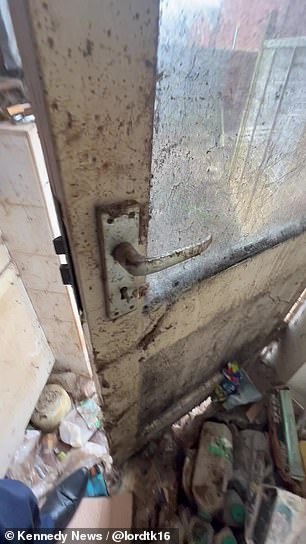 On the day he picked up the keys, he could not get through the front door because of the amount of rubbish in the entryway.

After getting in through the back he found himself in complete shock. Speaking of his first impressions, he said: ‘It was the worst smell I have ever smelled. All of the rubbish I was walking on was held together with urine so that smell was lingering. 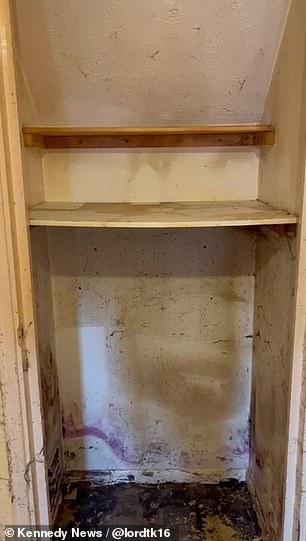 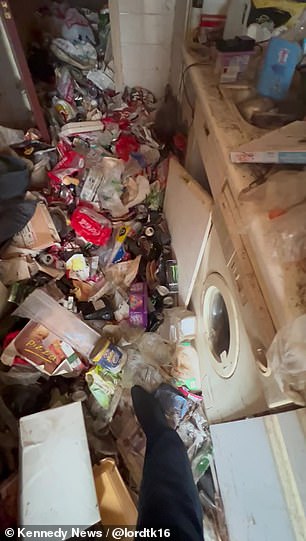 Taken aback by the humongous task ahead of him, Mr Kay said: ‘I thought ‘I’ve made a massive mistake’.’

‘It was absolutely disgusting so as I was recording I was being sick, you can hear me gagging. I could only get to a certain point and then you physically couldn’t go any further.

‘Instantly I thought ‘I’ve made a massive mistake’.’ 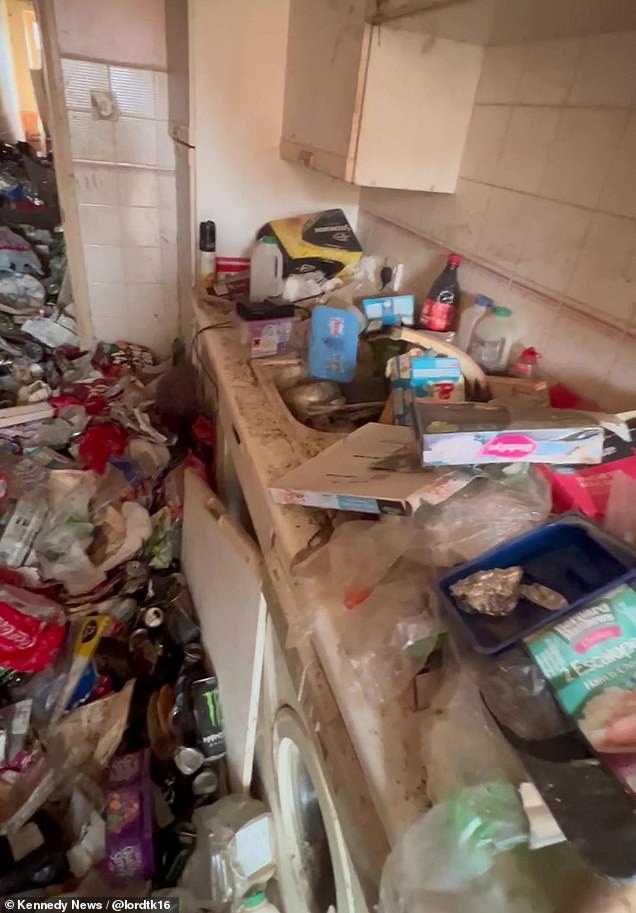 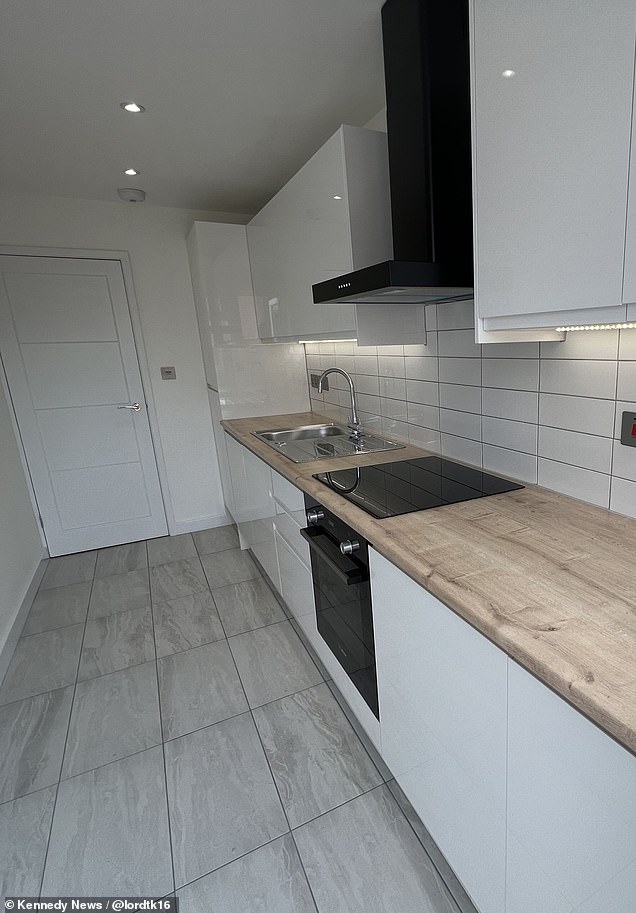 A change like no other: Mr Kay completely stripped the kitchen and installed a brand-new set up with a white tiled backsplash and wooden counter tops

After discovering the mess hidden inside, the property investor called in some clearance companies to tackle the stomach-churning job.

He claims the first three companies he contacted refused to even offer him a quote after seeing the state of the property, before a fourth company agreed to take it on for £2,500. 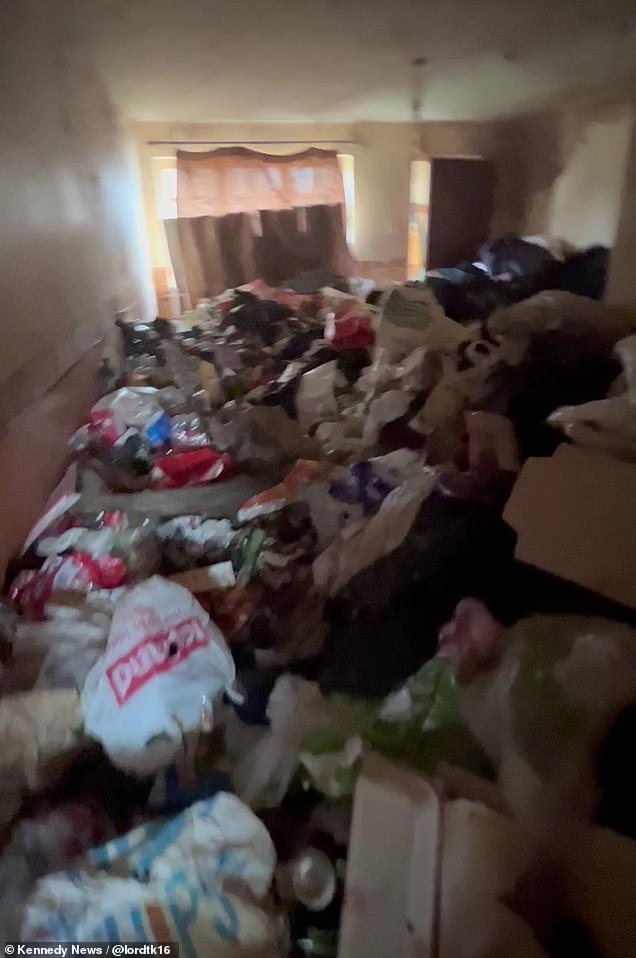 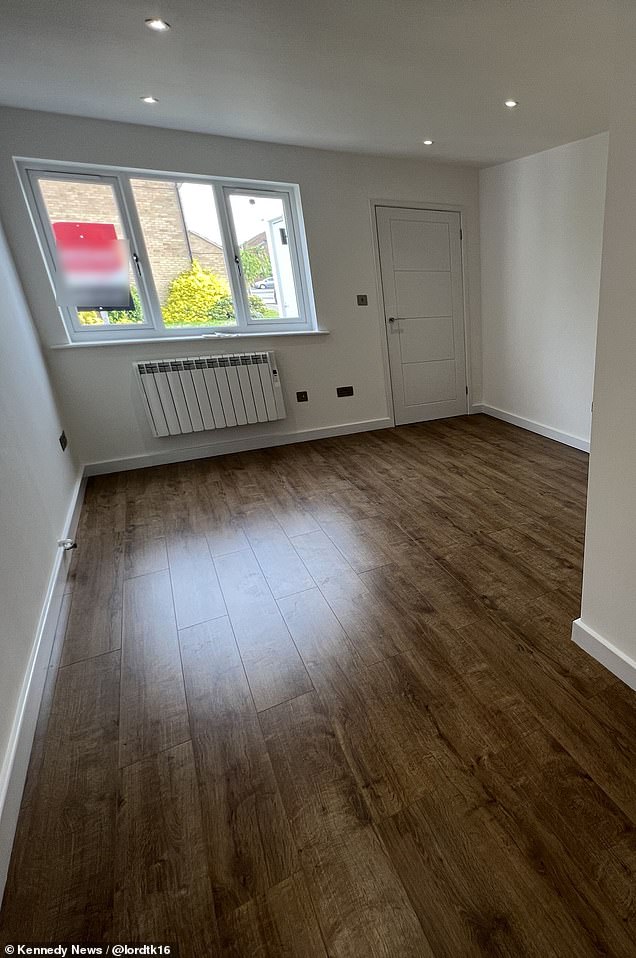 From trash to cash: The property which was originally covered in urine-soaked rubbish is now a bright, open space ready for rental

It took four workers five days to shift the rubbish that swamped every inch of the flat and was piled half-way up the walls in some rooms.

Mr Kay added: ‘They told me they broke three or four shovels trying to scrape things off the floor that had been sitting there for years and moulded to the floor with the urine. 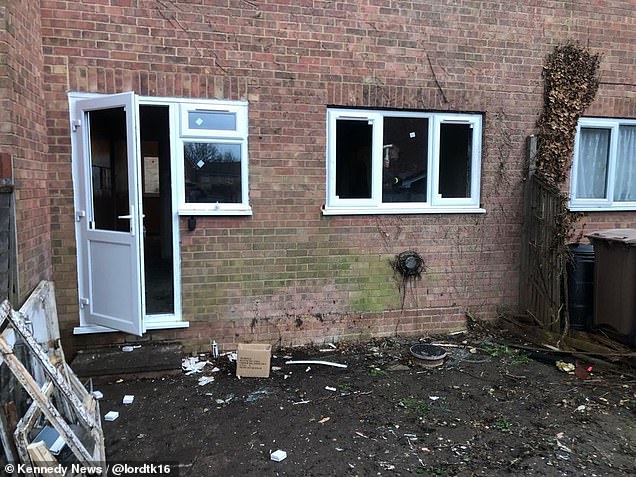 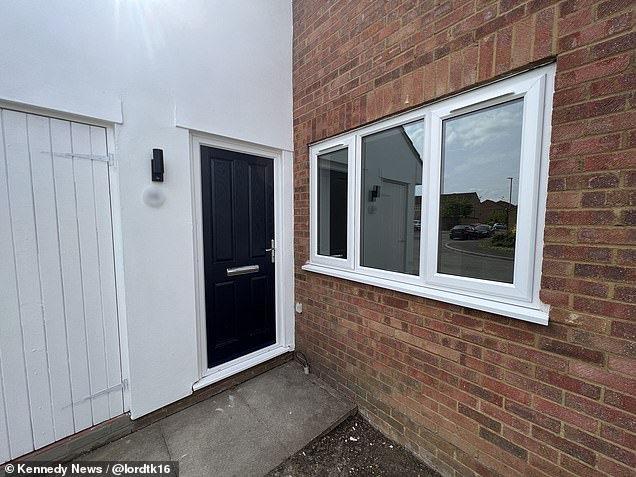 ‘It was as expected under the rubbish – there was mould so the walls had to be stripped bare and replastered and the flooring was mush and all had to be replaced.

‘Everything you can think of that needs doing when you build a property needed doing.’

Once this was finally done, the staggering £34,000 renovation could then begin, as a team of builders worked tirelessly for four weeks to turn the grubby blank canvas into a stunning luxury apartment. 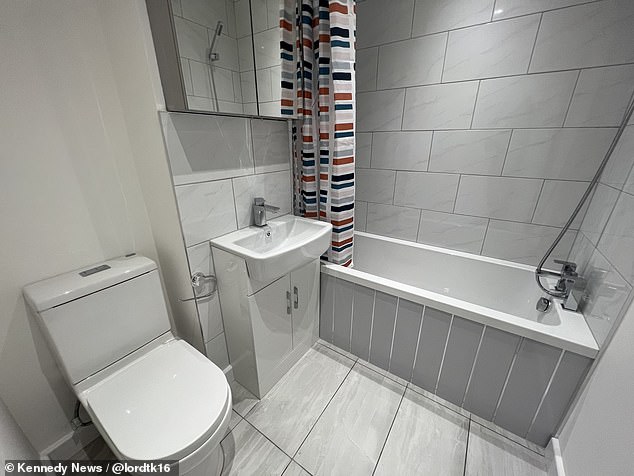 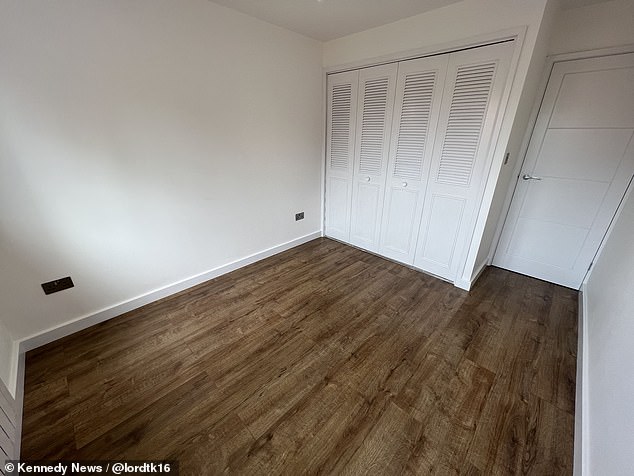 Sparkling clean: The brand-new floorboards compliment the freshly painted walls in the bedroom 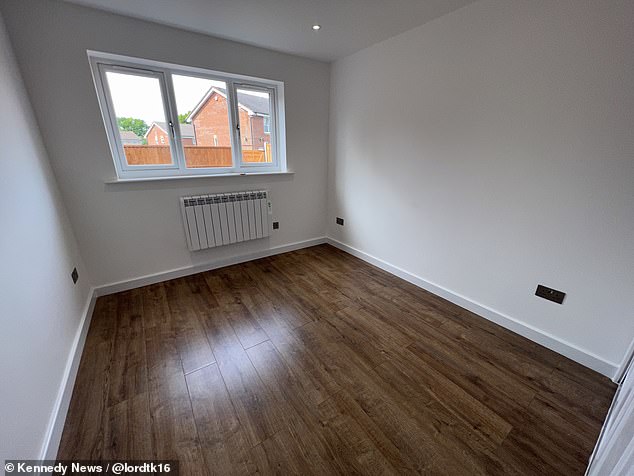 In the process new windows and doors were fitted, the electrics were updated, the walls were replastered and painted, the flooring was redone and new kitchen and bathroom suites were fitted.

Despite the state of the flat and it being Taylor’s first renovation project, he managed to transform it into a modern oasis in just four weeks, with a new tenant moving in just days later. 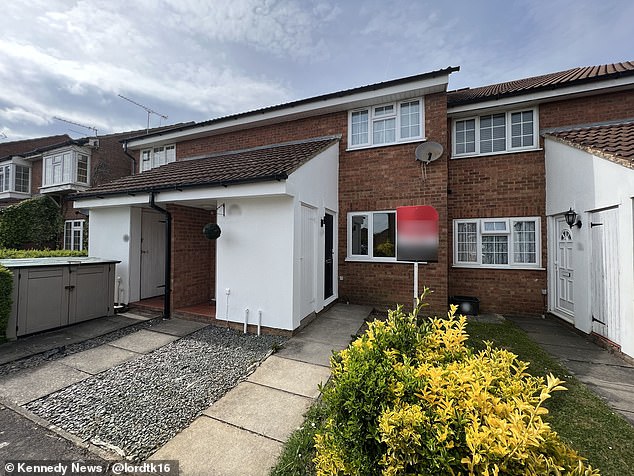 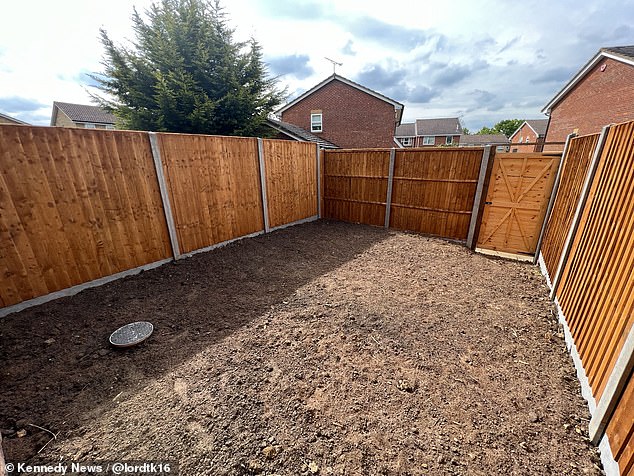 After the property was competed, Mr Kay had the maisonette valuated and it came to a whopping £180,000.

Having overcome his challenging first ever refurbishment job, he now plans on taking on more projects and growing his property portfolio.

Mr Kay said: ‘This was my first ever refurbishment job. It was a lot of hard work but it was worth it.

‘Now the work has been done and I’ve got great tenants in there paying rent, it was one of the best decisions I’ve ever made.’ 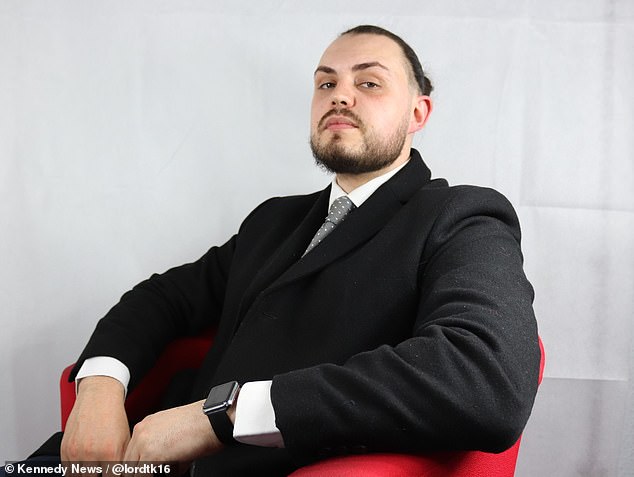 Taylor Kay, 29, said despite the huge challenge, buying the property was the ‘best decision’ he ever made