A ‘tearaway teen’ and refugee student from Iraq are left gobsmacked when they discover their ‘support worker’ is really a property millionaire in The Secret Teacher.

In tonight’s episode of the channel 4 show, Kate Stewart, 36, from Liverpool, whose beauty business turns over 5M a year, goes undercover in a secondary school with a ‘tricky situation’ in Sheffield.

As she seeks out students in danger of falling through the cracks, she’s automatically drawn to 15-year-old ‘rule-breaker’ Zain, and Molly, who regularly skips school.

‘Everyone in this world should dream big,’ says the businesswoman. ‘Never think you can’t achieve something. Have enough determination and self-belief, you can do anything.’

In tonight’s episode of The Secret Teacher Kate Stewart is immediately drawn to student Zain, 15. Pictured on This Morning earlier today 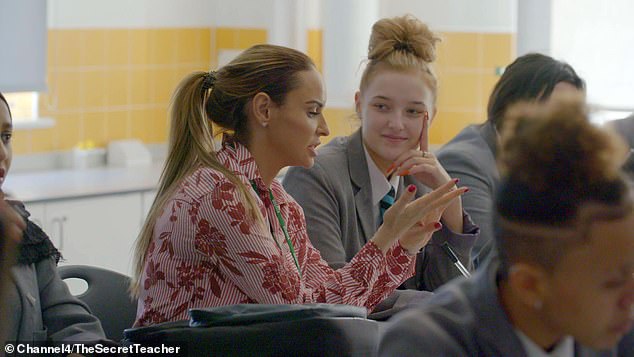 Kate Stewart, 36, from Liverpool, turns over £5 million a year thanks to her property empire. In the channel 4 show, she sees similarities between herself and student Molly (pictured) 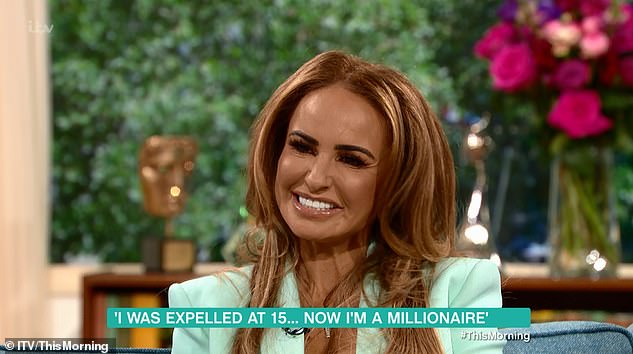 Kate was expelled from school at the age of 15 but impressively made her first million by the time she was 26. Pictured, on This Morning

Despite being expelled from school, Kate made her first million when she was 26.

‘I was kicked out of school at 15,’ she explains. ‘I had no qualifications. Everybody thought, “that’s it she’s wrote off, she won’t make anything of herself.” I thought, “I’m going to prove you all wrong” – and I did.’

She adds: ‘I’m looking for kids who have got entrepreneurial spirits and just don’t response to the education system,’ she explains.

‘If i see potential in these kids I will back them 100 per cent and will even give them jobs in my own organisation. But if I don’t – I won’t give them a penny.’

But Kate’s attention is immediately caught by Zain, who is ‘the kind of kid that does a teacher’s head in,’ and whose disregard for the rules has brought him close to expulsion.

‘He’s got such an innate intelligence, but it’s about harnessing it and making sure he uses it in the correct way,’ explains the headteacher.

Kate adds: ‘To most people, seeing somebody being disruptive would result in alarm bells going off in their head, but for me it doesn’t. I see it from a different side because I’ve that other side of the table.’

During the episode, viewers learn that Zain’s parents moved the family to the UK ten years ago from Iraq. 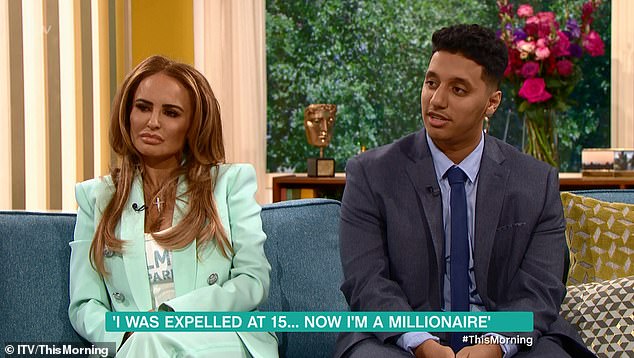 Speaking of Zain’s disruptive ways in class, Kate explains: ‘To most people, seeing somebody being disruptive would result in alarm bells going off in their head, but for me it doesn’t.’ Pictured together on This Morning 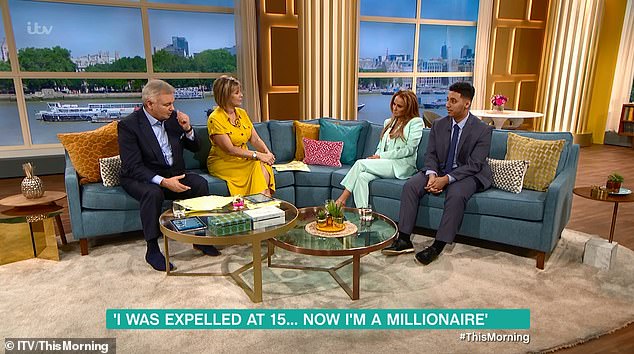 On This Morning, Zain told presenter Eamonn and Ruth that he was the ‘worst student’ in year 10 but that he;s now knuckling down

‘We’ve lived here since 2009,’ explains his dad. ‘We’re refugees. When I came here for the first time I slept well – it’s not the same in my country.’

‘Every time there’s a bomb, every time somebody’s killed, every time you hear some bad news, it’s not good for the children, me or for the family.’

The student explains that his dream is to open a computer repair shop – and to make his parents proud.

Kate Stewart and Zain on This Morning

The pair joined Ruth Langsford and Eamonn Holmes on the sofa today as Kate explained exactly how she’d made it with no qualifications.

‘Just by being cheeky and having lots of confidence,’ she told the presenters. ‘I’d walk into situations thinking, “there’s no one better than me – I can do this.”‘

Speaking of the moment she first saw student Zain, she said: ‘Oh my god he didn’t catch my eye, he took them away. I noticed him straight away and thought, “he’s the one for me.”

While Zain has since been offered a job by Kate, he still has his exams to complete first.

‘Right now with the exams were easy for me,’ he explained. ‘I was going in smiling and I was going out smiling even more.’

‘I was really, really terrible at school. I was the worst student ever in year ten, but year 11 I turned it around.’

Kate added: ‘I think the problem is there’s just one way of teaching in schools and it’s not for everybody – and people like Zain learn practically… we have to acknowledge not everyone is the same.’

‘In year 11 he went back and thought to himself, “I’ve got to knuckle down now.” That’s another thing that shone through – how hard he worked to catch up’

Kate went on to explain the difficulty with people judging others on what’s on a piece of paper – and their grades.

‘I was going to get a job and I had no experience and no qualifications,’ she said. ‘I had to go and keep knocking on the door and in the end they saw my personality and said okay.’

‘Education is really important, we all know. As long as you know you’ve tried your best then you’ve got nothing to be sorry for.‘

Kate added: ‘I think Zain reminded me a lot of myself when I was in school. I was bored and when I got bored I would mess around and I noticed that in Zain as well

‘My parents wanted me to be something they could be proud of, not something that’s ordinary – that’s why we took the chance and came here,’ he says. ‘I want to prove to them all that time wasn’t wasted. I don’t want to let them down.’

But rule-breaker Zain’s entrepreneurial efforts at the school fundraiser seems to impress Kate – and at the end of the episode, she offers him the opportunity to go and work with her.

‘It’s a big opportunity, thanks so much Miss,’ he says. ‘We moved here so we could get something different from Iraq. Sorry for crying – I’m too happy!’ 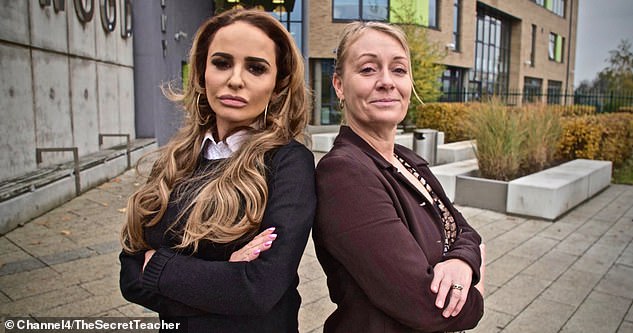 The property millionaire was expelled from school, but made her first million when she was just 26-years-old. Pictured, Kate with headteacher Mrs Simcock (right) 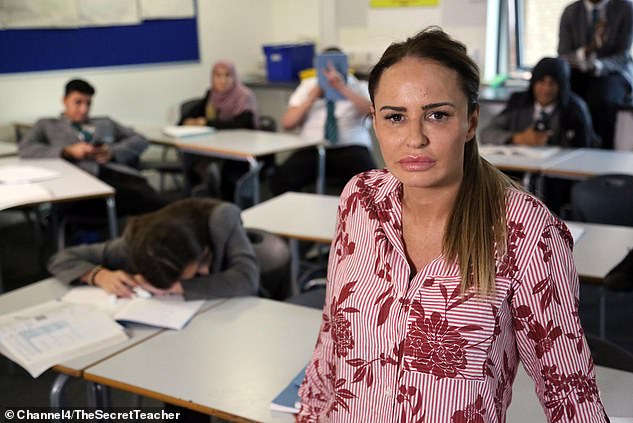 Kate also sees potential and a lot of herself in student Molly, who often doesn’t turn up at school for weeks, admitting she doesn’t like the ‘environment.’

‘We didn’t see Molly last year,’ explains the headteacher. ‘She’d just tell parents she’s coming into school and she’d just disappear and go off with students a couple of years older than her.’

‘Despite every intervention we’ve put in place, she’s going to be our lowest achieving student – which doesn’t surprise me, because she’s never here to learn.’

But Kate admits there’s something she really likes about the student, before adding it’s clear she lacks confidence and self-belief.

‘I can totally relate to where she’s coming from because I’ve been there, done it,’ says Kate.

‘It’s like a mirror – there isn’t much aspiration. You have to teach the kids and say you can do whatever you want to do – and it is true. I’m living proof of that.’

Speaking of her dream job, Molly explains: ‘School’s not my strongest point. I want to have my own business in hair and beauty.’ 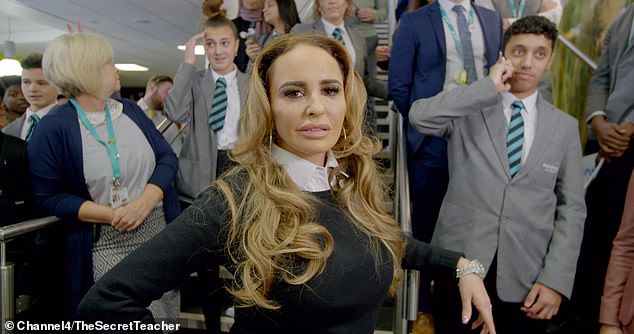 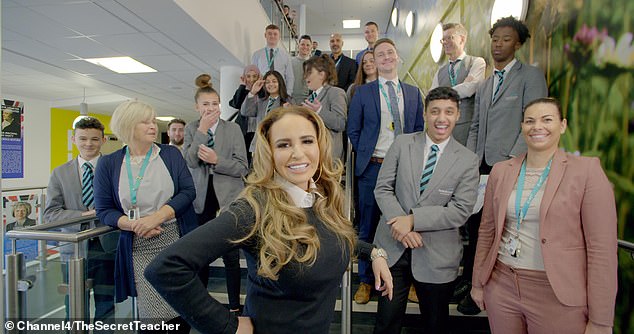 Speaking of the opportunity she’s given on the show, Kate says: ‘I’ve had to fight for everything I’ve got and if I can change one life, I can make a difference’

‘I want to be able to look forward to the future because if you didn’t think big you’d have to think small, and if you think small there’s no point of thinking at all.’

When Molly doesn’t show up at a revision session after work, Kate heads to her house to find out more.

‘I’m hanging about with the wrong people,’ admits Molly, leading the businesswoman to make further comparisons to herself.

‘Molly might not be entrepreneurial but she reminds me so much of me,’ explains Kate, who even heads to her house and gets her out of bed so she makes it to class. ‘I was a tearaway teenager.’

‘I was 16 when I met a boy, got pregnant and was absolutely terrified. Everyone wrote me off and thought, “that’s it, she’s going to have more kids, be on benefits” – and then I had a realisation point.’

‘The electricity went in the house and I didn’t have money to put the bulb back in. I thought, “this is not what I want to do or how I want my baby to grow up. I’m going to get out there, make money and going to make something of myself.”‘ 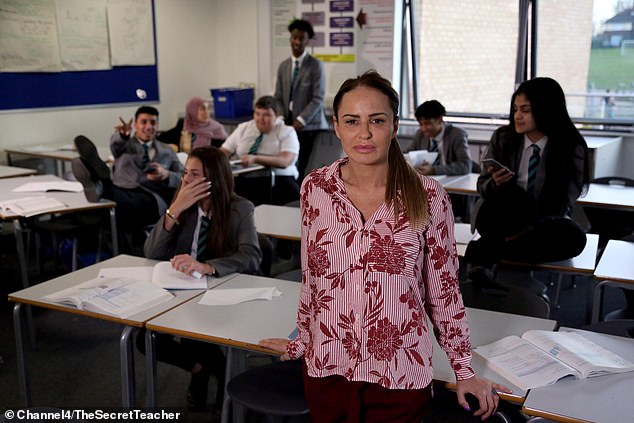 I’ve had to fight for everything I’ve got and if I can change one life, I can make a difference.’

She offers Molly an apprenticeship in a salon which could lead to a full-time job.

‘You remind me so much of myself when I was young,’ Kate tells her. ‘When I saw that I thought, “I need to help this girl and show her she can be whatever she wants to be” – because you’re a bright girl Molly.’

‘I feel special,’ says a teary Molly. ‘Why would she want to do that for me – out of everyone she could’ve chose? I’m very thankful.’

The Secret Teacher airs tonight at 9pm on channel 4

The multi-millionaire thinks spending £242,000 on diamonds is ‘a bargain’ and loves to flaunt her wealth with her expensive tastes.

The mother-of-three, who has previously appeared on Channel 5 show How The Other Half Lives, says she is not ashamed of her extravagant spending as she has worked hard for everything she has after starting from nothing.

Kate said it was initially hard to get people to give her a chance but worked as a secretary while studying for a business and management degree, alongside raising her daughter, Caitlin.

Recalling her career ascent, she said: ‘I did my education at the same time while I was a single mum. I did a degree and ended up running a company and then invested my money correctly so I built up my own empire.’

Her ’empire’ included owning tanning shops and beauty salons and she made her first million ten years ago.

She went on to own Liverpool’s Heritage Market while expanding her businesses and making other wise investments.

Now she can afford to travel with only toiletries when she goes on business trips to the capital to save herself the time and inconvenience of packing clothes.

She pays £1,000 a night to stay in a suite at the W Hotel in London where they offer the ‘designer wardrobe room service’.

‘I like to travel light and not have loads of suitcases, and by the time you get here the clothes would all be creased and need to be steamed,’ she explained.

She goes online and chooses the outfits she wants for her various meetings, lunches, client dinners and charity balls, and they are all waiting in her wardrobe when she checks in.

‘With the outfits already being here, it is so much easier and it is like being Cinderella trying them all on,’ she said. ‘I have gone online picked what I wanted and then it is all here so all I have to travel with is toiletries.

‘Every second is accounted for, time management is key in my life. This is just so much easier for me.’

Kate, a mother of three, believes ‘image is paramount’ so she is keen to make the right impression with her choice of outfit and show of wealth.

Along with her designer wardrobe, she loves to accessorise with expensive diamonds and the Channel 5 cameras followed her as she shopped at Rockefeller’s, a high-end jewellers.

She said that getting dressed up in expensive clothes and adorning herself in gems is her ‘armour’ in the business world.

She explained: ‘I don’t get embarrassed by my spending, I have worked for everything I have got and I am proud of everything I buy.

‘Sometimes nice clothing and jewellery is your armour, you put your amour on and go out and you are almost playing a role, it makes me feel more confident.’

Kate admits her lifestyle now is a far cry from her humble beginnings.