A marriage proposal at the Tim Tsuyu boxing fight on Wednesday night was a memorable moment for one couple – but it very nearly went pear-shaped.

In between two of the preliminary fights on the main fight card, one hopeless romantic decided Sydney’s Qudos Bank Arena was the perfect venue to get on one knee and ask the most important question of his life.

The trouble was, the man made a meal of the public proposal, unable to yank the engagement ring from his pocket.

After what seemed an eternity, he finally prized the rock free and proposed – with the help of a microphone from the venue’s PA system.

Thankfully, his lady said yes in a moment the couple – and countless other boxing fans – won’t forget in a hurry. 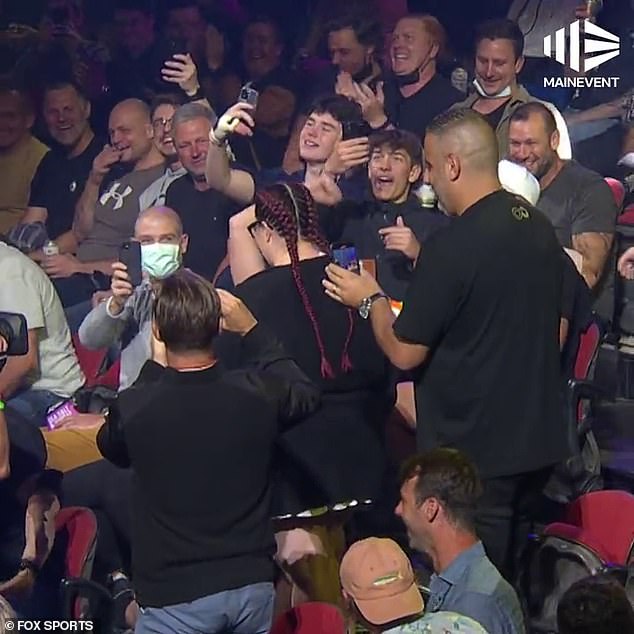 After what seemed an eternity the man (who is obscured) got on one knee and asked the question – his girlfriend said yes, delighting the Sydney crowd

A number of ringside commentators had a field day watching the man become frantic as he fumbled around for the ring.

‘Is this the old big marriage proposal at the sporting event? And here they are next to the ring and he can’t find the ring!

‘Oh he’s got it at long last. Let’s hope the answer is a yes. He’s got to get the microphone as well so it gets broadcast to the crowd.

‘Down on one knee, no standing eight count required and let’s hope it’s all in the affirmative that it’s a knockout decision for him.

‘That’s a new one for me at the fights. It looks like it’s smiles all round.

‘Yes! She did say yes. That’s great. Congratulations to the very happy couple.’

Australian boxing legend Barry Michael described the scenes as a ‘novelty’ and a scenario he had ‘never seen before’ at a boxing bout.

In the main card fight, Tsuyu improved his professional record to 20-0 after the judges awarded him a unanimous decision following 12 brutal rounds against the tenacious Takeshi Inoue from Japan.

‘He felt like a brick wall, I don’t think a heavyweight could drop him,’ he said.

‘Hats off to him, he’s a warrior. I heard him squeal, his face is battered and look at his body. He’s so tough.’ 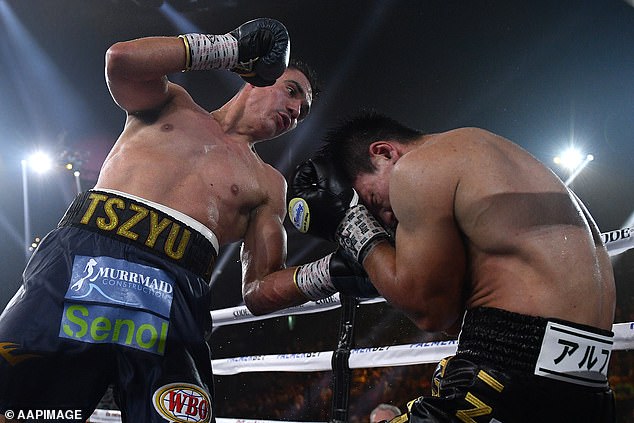