Sydney to Melbourne in 40 MINUTES: Ultra high-speed trains could soon slash inter-state travel times across Australia with top speeds of more than 1220km/h

Commuters could soon travel between Sydney and Melbourne in as little as 40 minutes in a new ultra-high speed tube.

The ‘capsule’ in the tube-based system would run from Adelaide to Brisbane at around 1,1223 km/h and pass through major cities along the way, The Herald Sun reported.

Travelling from Adelaide to Melbourne or Sydney to Brisbane would take just over 30 minutes.

A trip from Melbourne to Canberra is expected to take 23 minutes, and passengers could travel from Canberra to Sydney in only 14 minutes.

The ‘capsule’ in the tube-based system would run from Adelaide to Brisbane at around 1,1223 km/h and pass through major cities along the way (artist impression) 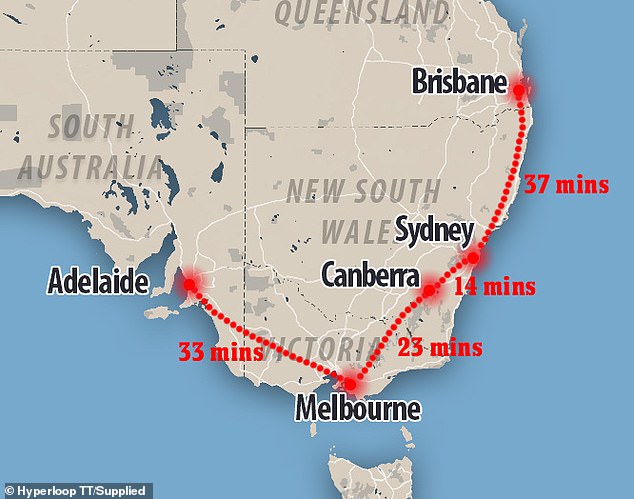 From Adelaide to Melbourne travel time would be just over 30 minutes; Melbourne to Canberra, 23 minutes; Canberra to Sydney, 14 minutes; and Sydney to Brisbane, only 37 minutes

Freight would also be transported along the tube.

The proposal for the ‘ultra-high speed, tube-based inter and intra-city’ transportation system was presented to the Federal Government.

Big shot Elon Musk first pitched the land-based technology known as the ‘Hyperloop’ back in 2012.

This time around, Los Angeles-based Hyperloop Transportation Technologies (Hyperloop TT) submitted the plan in response to a government inquiry into automation and land-based mass transit.

‘A Hyperloop serving Australia’s Eastern seaboard and connecting Sydney, Melbourne and Brisbane addresses a population of over 10 million people,’ the submission read.

‘Adding Adelaide, Canberra, the Southern Highlands and extending the route to the Gold Coast increases the number to well over half of the Australian population, in a 2000km stretch of relatively flat, seismically stable terrain and creating new business, passenger and freight transport opportunities to millions of Australians each year.’

The futuristic system comprises of capsules magnetically levitating in a tube on pylons, the ground or underground.

Air pressure is lowered to reduce friction and allow the capsule to move at high speed. 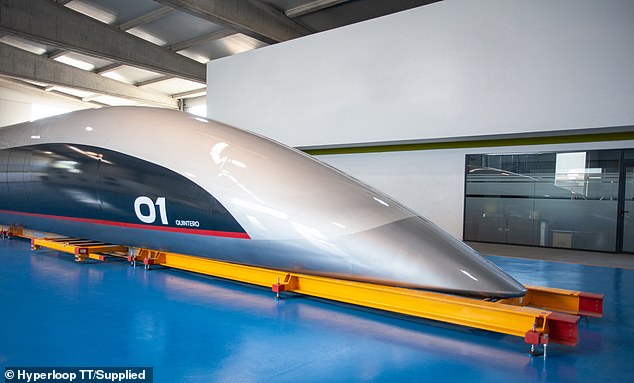 The proposal for the ‘ultra-high speed, tube-based inter and intra-city’ transportation system was put forward to the Federal Government (artist impression)

The entire system would also run on solar power.

As far as the submission goes, Hyperloop TT did not predict how long the tube would take to construct or how much it would cost.

Though the company seems certain in its ability to deliver the out-of-this-world system.

They plan to have a full-scale prototype operating in France in 2019.

According to its website, the company already has 11 global government agreements.

However, just last year the Queensland government rejected a proposal from Virgin Hyperloop One.

Hyperloop TT’s rival company proposed a route from Sydney to Tamworth to Toowoomba to Brisbane and even the Gold Coast.

Their proposal was dismissed as it had no ‘business case’. 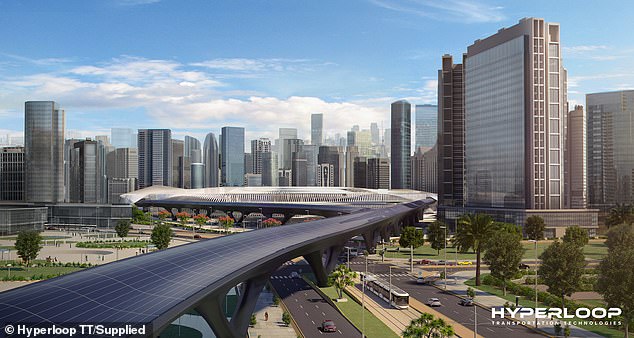 The futuristic system comprises of capsules magnetically levitating in a tube on pylons, the ground or underground (artist impression)