Justine Damond, formerly of Sydney, was shot dead by police officer Mohamed Noor on July 15 after calling 911 to report a possible assault on another woman

US prosecutors spelled the name of a slain Australian mother wrong as they announced more time was needed to decide whether to charge the cop who shot her dead.

Hennepin County Attorney Mike Freeman said a decision whether to charge Mohamed Noor over Justine Ruszczyk Damond’s death would be put off until 2018.

But his office called her ‘Justine Damon’ in the press release issued on Thursday (Friday morning Australian time), before correcting it.

Noor, 32, shot Ms Damond on July 15, just minutes after she called 911 to report a possible sexual assault in the alley behind her home. 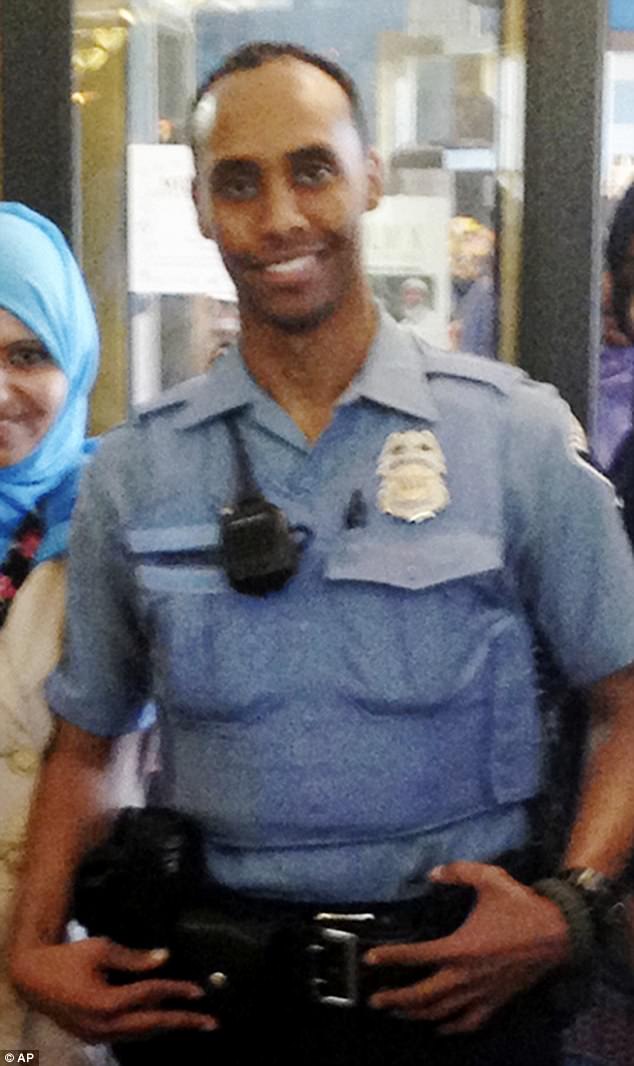 Minneapolis policeman Mohamed Noor, 32, shot Ms Damond on July 15, just minutes after she called 911 to report a possible sexual assault in the alley behind her home 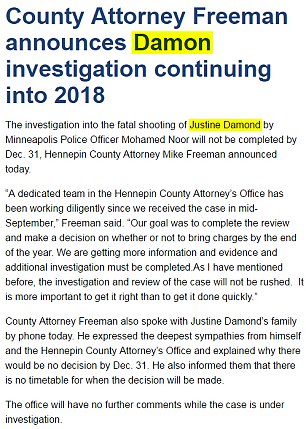 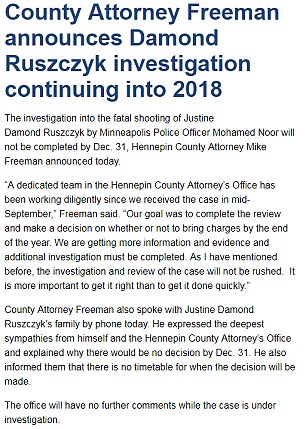 Mr Freeman had promised to make a decision on whether to charge the Somali-American Minneapolis officer by the end of the year.

But on Thursday, he said his office was ‘getting more information and evidence, and additional investigation must be completed’.

‘The investigation and review of the case will not be rushed,’ he said in the statement that originally containing the misspelling.

‘It is more important to get it right than to get it done quickly.’

Mr Freeman set no new timetable for a charging decision. His statement said he had spoken with Damond’s family to inform them of the delay.

‘We want justice and appreciate the support from all those who want the same. We ask for the public’s patience to allow the investigation to continue,’ they said. 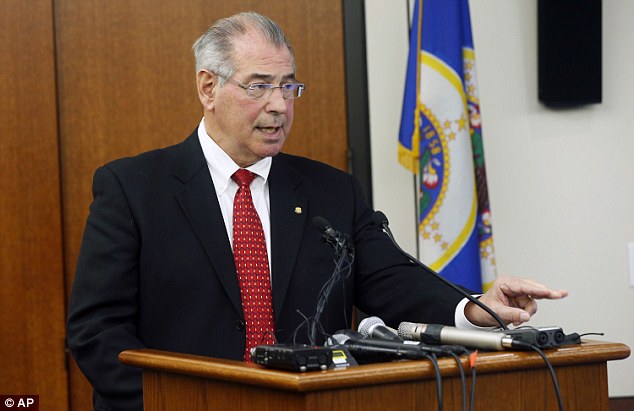 The announcement came two weeks after Freeman was seen on video at a holiday reception saying investigators hadn’t brought him enough evidence to warrant charging the officer.

‘I’ve got to have the evidence, and I don’t have it yet,’ he said in the video.

‘Let me just say it’s not my fault. So if it isn’t my fault, who didn’t do their job? Investigators. They don’t work for me. They haven’t done their job.

‘I have to prove beyond a reasonable doubt, the moment he shot the gun he feared for his life, and he used force because he thought he was going to be killed.

‘But he won’t answer my questions. … I can’t talk to her because she’s gone, and the other cop just gave us s**t.’

Ms Damond, a 40-year-old life coach, was engaged to be married when she was gunned down in her pyjamas as she approached Noor’s patrol car.

Noor was in the front passenger seat and shot across his partner and out the driver’s side window, hitting Ms Damond in the stomach. 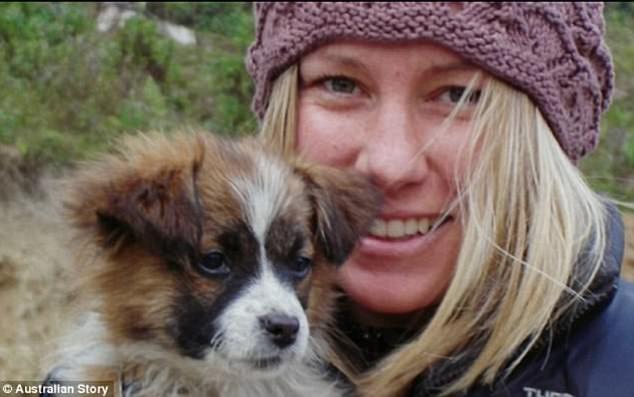 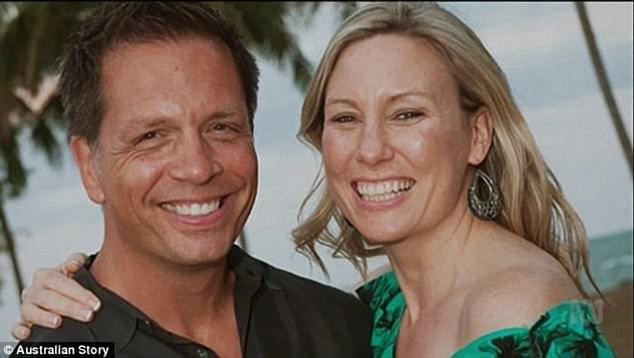 The fallout from her death cost Minneapolis’ then-police chief her job and forced major revisions to the police department’s policy on body cameras.

Noor has not spoken publicly about the case. He also declined to speak with state investigators.

Noor’s police partner, Matthew Harrity, told investigators he was startled by a loud noise right before Damond approached the driver’s side window of their police SUV.

The officers did not turn on their body cameras until after the shooting, and there was no squad camera video of the incident.

The case raised questions about the training Noor received. He studied business and economics and worked in property management before becoming a cop. 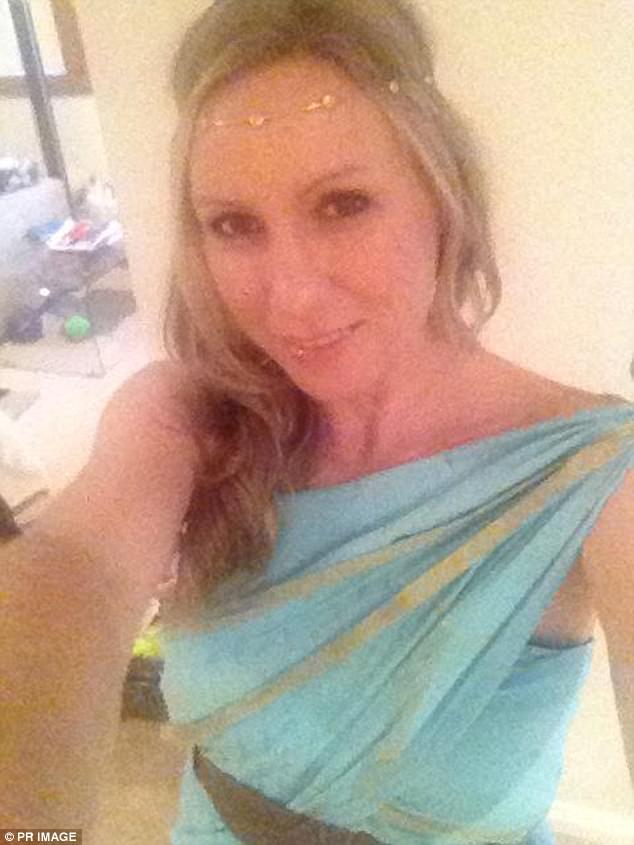 Noor was in the front passenger seat and shot across his partner and out the driver’s side window, hitting Ms Damond in the stomach

The police shooting was the third high-profile one for Minnesota in recent years in which a prosecutor made a charging decision rather than relying on a grand jury, a process criticized for secrecy and for the rarity of officers being charged.

It’s the second time that Freeman has weighed a high-profile police shooting without a grand jury.

In the earlier case, Freeman elected not to file charges against two officers involved in the November 2015 death of Jamar Clark in Minneapolis.

The shooting of the 24-year-old Clark, who was black, set off repeated protests and an extended encampment outside the police precinct headquarters on the city’s north side.