A woman whose 200-year-old sycamore tree is being poisoned through dozens of holes drilled into the trunk fears the culprit is a disgruntled neighbour whose light is being blocked.

Homeowner Jill Sarchet, 51, from Burnley, became suspicious after some branches and leaves on the protected 100ft-tall specimen turned brown.

Then to her shock she discovered around 50 holes drilled into the base of the tree which sits at the end of her back garden. 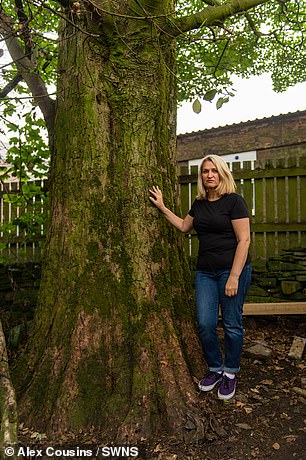 Homeowner Jill Sarchet, 51, from Burnley, became suspicious after some branches and leaves on her protected 100ft-tall sycamore (left) turned brown. Later, she inspected it closely and found holes in the trunk (right)

It is thought a trespasser is sneaking into her property at night and injecting poison into the holes.

Arborists now say there is a very high chance the tree, which is the subject of a Tree Preservation Order from Burnley Council, will die.

Mother-of-two Mrs Sarchet says the tree blocks some neighbour’s sunlight and that the poisoning could have been carried out by someone who wants the tree removed.

The receptionist, who has reported the situation to police, said: ‘This behaviour is totally unwarranted and unnecessary.

‘This is one of the oldest and most important trees in Burnley and has been here a lot longer than the person responsible for this. The whole situation has left me extremely distressed.

‘To think that someone is creeping into my garden either when I’m not at home or at night to carry out this kind of malicious behaviour is devastating.’ 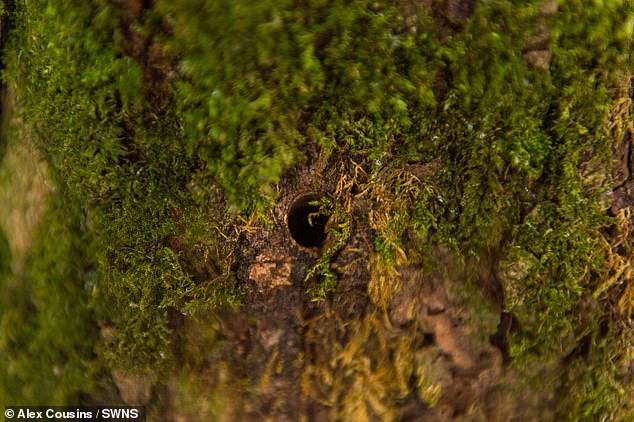 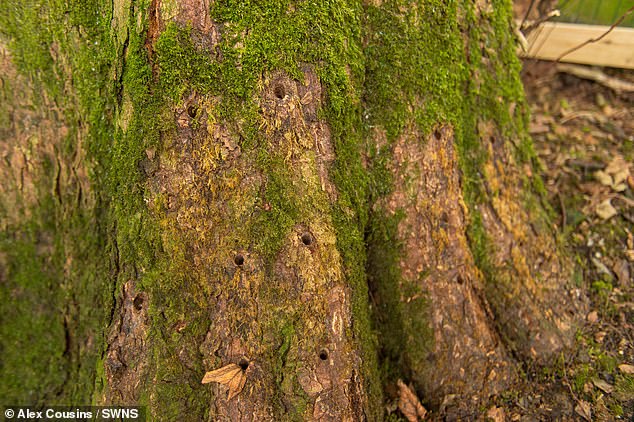 Arborists now say there is a very high chance the tree, which is the subject of a Tree Preservation Order from Burnley Council, will die

Mrs Sarchet had made her feel constantly stressed.

‘I now lay in bed wondering if someone is out there,’ she said. ‘I’m on edge when it’s dark and I need to let the dog out into the garden.

‘My daughter has been scared to sleep in her bedroom, thinking someone could be just outside her window.

‘Some neighbours came to me last year and said they didn’t like the tree because it blocked sunlight from their house.

‘I explained it was a protected tree and there was nothing I or they could do about it.

‘My opinion is that they should have considered all this before they bought the house three or so years ago, the tree was there then. Don’t buy the house if you don’t like the tree.’ 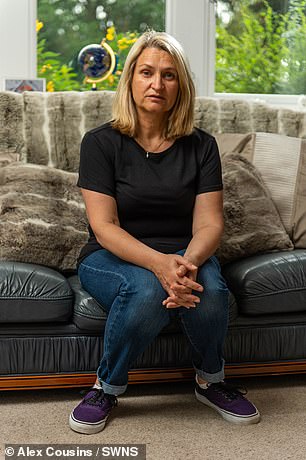 Mrs Sarchet and her family have vowed to find the culprit and press charges against them.

Anyone who wilfully destroys or damages a tree that is subject to a Tree Preservation Order can be taken to court and fined up to £20,000.

In serious cases, a trial can go to crown court and, if convicted, the offender is liable to an unlimited fine.

He said: ‘I was absolutely outraged when I heard about what had been going on.

‘Jill then invited me over to see for myself and I counted 52 five-inch holes had been drilled into the base of the tree.

‘This is disgusting behaviour, and I am currently liaising with the council to establish what the next form of action should be.

‘It is beyond belief that whoever is responsible for this hasn’t considered the environmental implications killing this tree will have.

‘Killing this tree could be equated to killing the future for your children – it takes tons of carbon out of the atmosphere.

‘What would happen if someone went around doing this to every tree they come across? We’d be left in a very bad position.’

Mrs Sarchet has now spent over £500 on a fence around the back of her garden to deter the vandals.

She said: ‘My elderly father and my son have spent the last few weekends putting the fence up.

‘This should not only offer us some more security but may also help any further damage to the tree, which could already be irreparable.’ 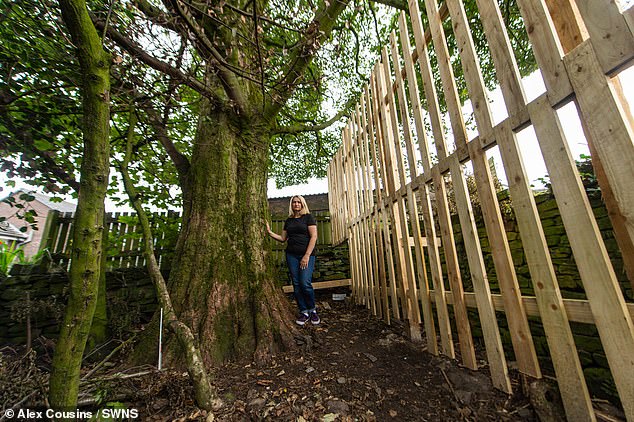 Tree expert Greg Thompson travelled to Burnley from Cumbria after he was contacted by Mrs Sarchet to undertake an assessment.

He said: ‘The damage will lead to extensive pruning at the very least to remove dead limbs and reduce any healthy limbs due to new exposure to wind loading.

‘There is a very high chance the tree will need to be removed depending on an arboriculturalist’s report.

‘The tree may die completely in the next few months.’