A protester who tried to disrupt President Donald Trump during a campaign rally has been detained by the Secret Service.

The protester screamed and waved signs showing and old photo of Trump with Jeffrey Epstein and the words ‘child rapist’ at the rally on Wednesday in Greenville, North Carolina.

Epstein is a financier accused of sexually abusing young girls, who was at one time in Trump’s social circle.

‘He goes home now to mommy and he gets reprimanded, and that’s the end,’ Trump joked after the brief disruption. ‘Sorry mom, didn’t mean to embarrass you mom,’ Trump imagined the protester explaining.

A protester holds a photo of US President Donald Trump with Jeffrey Epstein during a ‘Make America Great Again’ rally at Minges Coliseum in Greenville, North Carolina on Wednesday 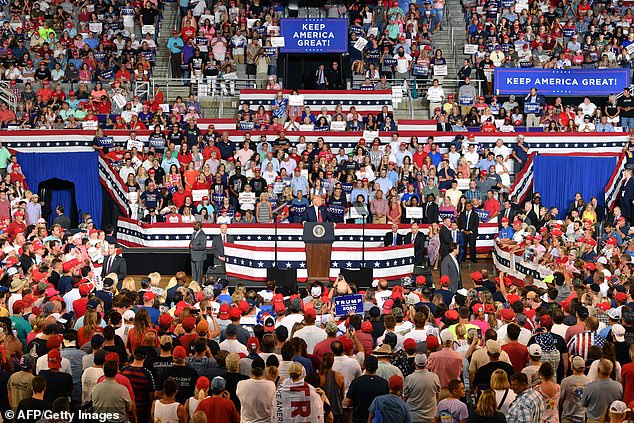 The crowd in the sold-out 8,000-capacity arena booed as the man, disguised in a Trump hat, screamed and waved the signs as Trump launched into an attack on Rep. Ilhan Omar and the other members of the so-called ‘squad’ of freshman Democrat Congresswomen.

Agents quickly tackled and handcuffed the man, prompting cheers from the crowd and chants of ‘USA, USA.’

The man, who has not been identified, was wearing the T-shirt of a now-defunct Charlotte band called Native Trash.

Trump resumed his remarks, in which he harshly criticized the four fiery, left-wing congresswoman calling them un-American and saying that they are the face of the Democratic Party that will ruin the country. 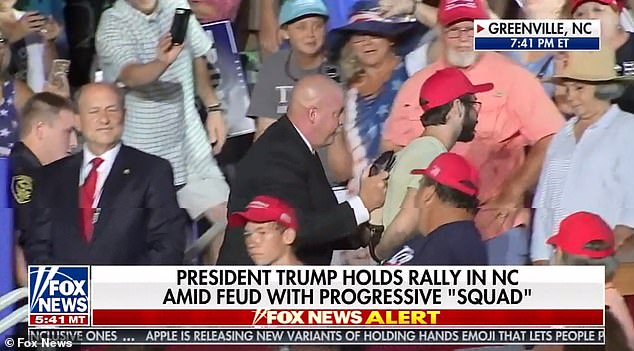 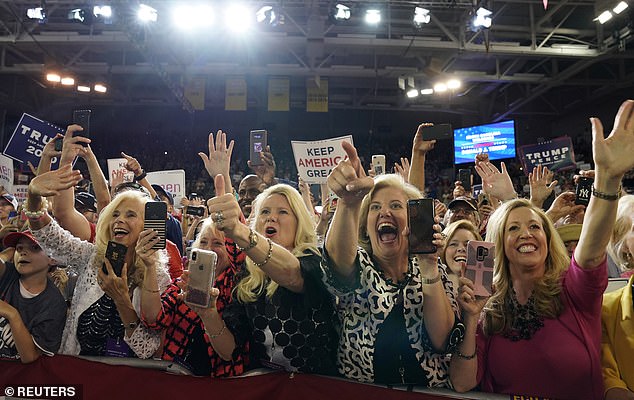 The crowd of 8,000 in the sold-out coliseum cheers as Trump arrives on stage

‘I think in some cases they hate our country,’ Trump said to the crowd in North Carolina, a swing state he won in 2016 and wants to win again next year.

Trump’s jabs were aimed at the four freshman Democrats, self-described as ‘the squad,’ who have garnered attention since their arrival in January for their outspoken liberal views and distaste for Trump: Reps. Alexandria Ocasio-Cortez of New York, Ilhan Omar of Minnesota, Ayanna Pressley of Massachusetts and Rashida Tlaib of Michigan.

Trump recently tweeted that the Democratic congresswomen of color should ‘go back’ to their home countries – though three were born in the United States, and Omar was born in Somalia. 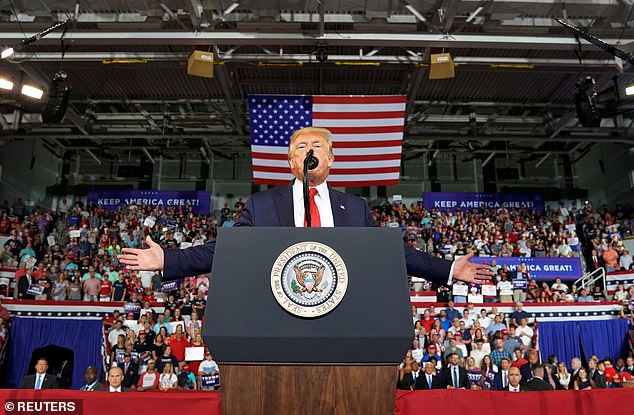 Trump speaks at a campaign rally in Greenville, North Carolina on Wednesday 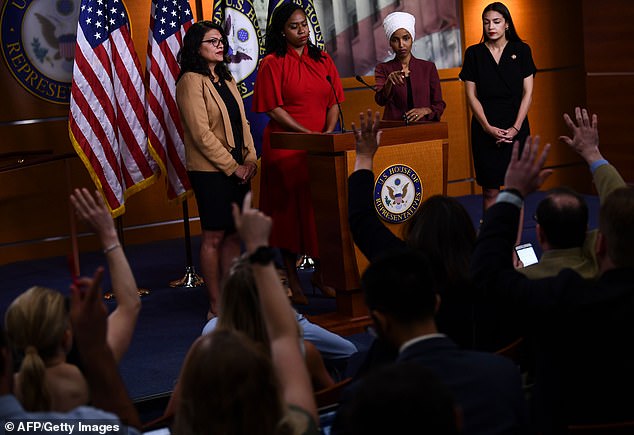 Trump has accused the four of ‘spewing some of the most vile, hateful and disgusting things ever said by a politician’ and has told them, ‘If you hate our Country, or if you are not happy here, you can leave!’

When he named Omar at Wednesday’s rally, the crowd booed and launched into chants of ‘Send her back!’

Before he left Washington, Trump said he has no regrets about his ongoing spat with the four. Trump told reporters he thinks he’s ‘winning the political argument’ and ‘winning it by a lot.’