Police have been accused of arresting a tree protester on a ‘trumped up’ charge after they detained a woman for blowing a toy horn.

Officers said they moved in after a member of the public made a complaint about the noise from the orange plastic trumpet – while workmen with industrial chainsaws chopped down trees.

The bizarre moment came as police and protesters who are trying to save hundreds of trees from being felled across Sheffield clashed and three arrests were made. 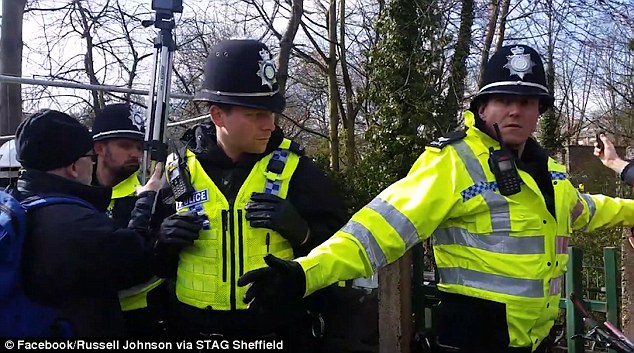 Protesters have been campaigning against a plan to chop down more than 6,000 trees across the city, with residents claiming many of those trees destroyed were in good health 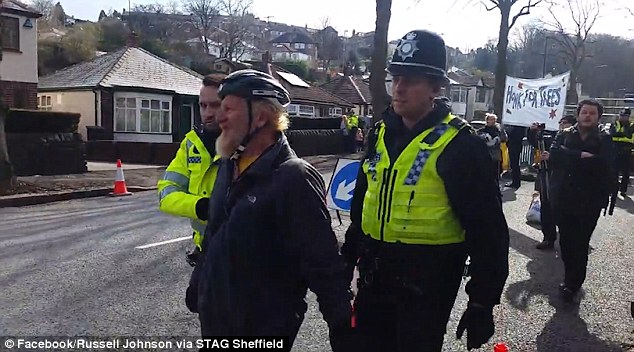 The 57 year-old woman was detained under the public order act.

Now fellow protestes have launched an online campaign to ‘Free The Tooting One!’ mocking the police’s handling of the matter, while many others have expressed outrage.

Sheffield City Council has employed the infrastructure support company Amey to carry out the controversial felling programme as part of a £2.2 billion contract.

As part of Streets Ahead scheme to improve roads and footpaths in Sheffield 5,500 trees have been cut down since 2012 and the future of another 500 has been sealed.

The authority insists contractors are removing only dead, dying, diseased, damaged or dangerous trees as part of the deal signed with the Labour-run council.

But residents have been incensed by the loss of trees, many of which they claim were healthy, that have stood for decades.

Their anger has been increased by what they say has been the heavy-handed treatment of protesters by police.

Yesterday’s confrontations on Rivelin Valley Road on the city’s outskirts were the latest in the ongoing dispute. Twenty-five officers were involved in the operation along with more than a dozen security staff.

A video posted online of the incident shows the woman at first being warned by officers for setting off a rape alarm.

She responds by telling a police officer she had activated it ‘because they are raping the trees’. 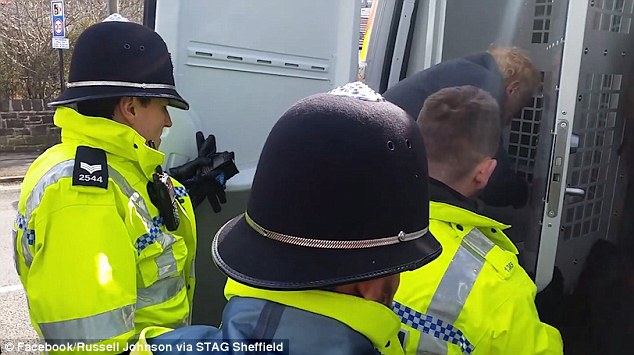 Shortly after switching it off and then blowing a horn, she was arrested by police.

The woman said on the video: ‘I’m not breaking any laws. It’s after seven in the morning and before seven in the evening.’

She said the tree fellers working at the same time with chainsaws were ‘making more noise than I am’.

Another protester was taken to hospital after suffering an injury moments after being removed from inside safety barriers by private security guards.

Police said the arrest on Rivelin Valley Road on the outskirts of the city had been made following a complaint about the horn-blowing from a member of the public.

There were two others arrests linked to the increasingly-bitter dispute. A 49-year-old man was removed from the protest for a public order offence after swearing at police officers and received a fixed penalty notice.

And a 65-year-old man was arrested on suspicion of obstructing the highway and was also reported on summons.

In another incident, a campaigner was hurt shortly after being removed from inside safety barriers by private security guards working for the contractor.

People took to social media to express their dismay at the police’s handling of the situation.

Sheffield-born singer Richard Hawley posted a picture online of him holding a sign saying ‘Off Our Trees! Please!’

John Wilman wrote: ‘Another disgraceful act of overzealous policing by South Yorks police on behalf of AMEY just to get the protestor away from the area. Arrested on a made-up charge. Disgraceful.’

And Dave Dillner added: ‘Today a female campaigner was arrested for blowing into a 65cm long (approx) plastic horn. Allegedly for disturbing the peace.

‘Oddly, at precisely the same time, a chainsaw was in strong competition with aforementioned plastic horn to be louder.

‘Most would happily concede victory to the chainsaw. Is it just me or is this getting beyond silly now.’

‘A 49-year-old man was arrested on suspicion of Section 5 Public Order Offence and accepted a fixed penalty notice.

‘A 65-year-old man was arrested on suspicion of obstructing the execution of Act under Section 303 of the Highways Act 1980.

‘Following a complaint from a member of the public, a 57-year-old woman was arrested on suspicion of causing intentional harm or distress, under Section 4a of the Public Order Act 1986. Both have been reported on summons.

‘A number of people at the site were also reported on summons under Section 303 of the Highways Act 1980.’

The spokeswoman said the woman who was injured was lying on the ground outside the safety barriers and was hurt as security guards removed another protester. An ambulance was called and she was taken to hospital.

Police said the incident had been reported to the force by a third party, but it had not received a formal complaint from the person involved.

In January this year the increasingly bitter battle took a sinister twist amid allegations that workmen had been poisoned after drinking tea given to them by a resident.

Clashes between private security guards hired by Amey and campaigners earlier this year led to a decision to increase the number of officers being sent to tree-felling operations, with dozens being deployed on an almost daily basis.

There have been 14 arrests since the higher policing presence was introduced four weeks ago, with allegations including assault and criminal damage.

One person has been charged with wilful obstruction of the highway in relation to an incident earlier this week.

Eight people have been reported on summons under Section 303 of the Highways Act 1980 and one person has been reported for summons for Aggravated Trespass.

Thousands of street trees in the city are being felled and replaced with saplings as part of a PFI highways maintenance contractor, with campaigners objecting to what they say is the unnecessary removal of healthy trees.

Three MPs in the city have called for the work to be halted so talks can take place following the recent arrests.