Protesters banned from campaigning against teaching LGBT outside Birmingham school

Anti-LGBT equality teaching campaigners have today been banned from outside a primary school after children were subjected ‘inflammatory daily protests’.

The ban, handed down at the High Court in Birmingham this morning, includes an exclusion zone surrounding the city’s Anderton Park Primary School.

Headteacher Sarah Hewitt-Clarkson had previously described the demonstrations as ‘awful’, ‘toxic and nasty’, and has spoken of receiving threats as a result of the gatherings.

The legal bid had been opposed by protesters, along with an interim ban first granted at the same court in the summer.

The permanent ban comes as a report found children endured ‘inflammatory daily protests’ outside their primary school by opponents of LGBT equality teaching.

Parents, children and protesters demonstrating against the lessons about gay relationships and LGBT rights at the Anderton Park Primary School in Birmingham in March

Birmingham City Council was granted an order temporarily banning protesters from outside the school’s gates in June, over safety fears about repeated large-scale demonstrations, often involving people with no direct connection to the school.

The injunction was made against three individuals – the protest’s main organisers Shakeel Afsar and Amir Ahmed, and parent Rosina Afsar, as well as ‘persons unknown’.

The self-styled businessman, who has no children himself at the school, claimed protests were only triggered because the headteacher had not properly consulted parents about relationships teaching.

He had argued education material used was not age appropriate, and further claimed the school was ‘over-emphasising a gay ethos’.

Mrs Hewitt-Clarkson rejected the claims, saying the material was appropriate and great care had been taken in how children were taught about different relationships. 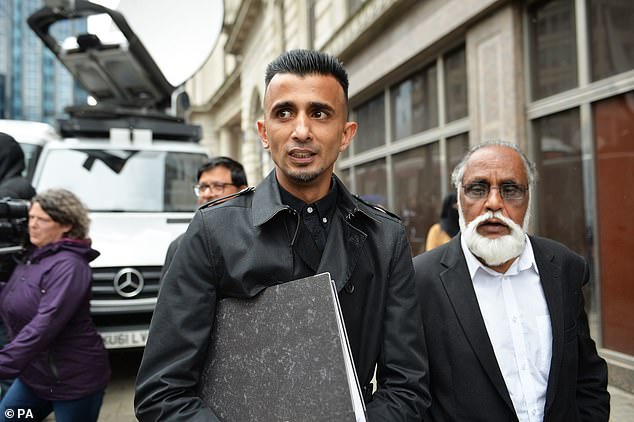 She also told the judge, giving evidence at the injunction’s trial, that parents had had ‘numerous informal and formal chances to speak to us as a school’ about any concerns.

But describing a private meeting she had with Mr Afsar in her office, she said: ‘He slammed his hand on my desk. He used the word ‘demand’… It was volatile, it was aggressive.

‘I had never had a meeting like that before in 26 years of teaching.

‘He set up a WhatsApp group that afternoon … trying to whip up a frenzy.’

Mr Justice Warby QC, handing down the permanent injunction at the High Court in Birmingham, said the protests had ‘a very significant adverse impact on the pupils, teachers and local residents’. 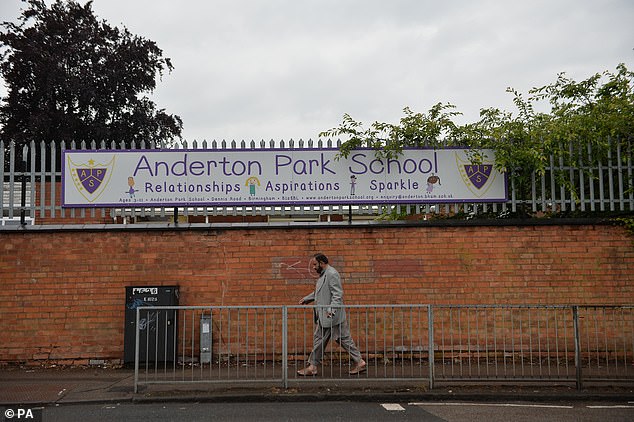 Anderton Park Primary School, in Moseley has been at the heart of the demonstrations

He added: ‘None of the defendants have suggested it was true and the council has proved it is not true.’

Imposing the injunction, he said: ‘The court finds on the balance of probabilities the defendants bear responsibility for the most extreme manifestations (of the protest).’

Mr Justice Warby added that what was being taught at the school had been ‘misrepresented and misunderstood’ by the protesters.

He said there had been leaflets handed out ‘suggesting the school was promoting homosexuality – which is not the case’.

‘This judgment notes that the true position has been misrepresented, sometimes grossly, in the course of these protests,’ he added.

The injunction does not include an earlier ban on use of social media to abuse teaching staff. 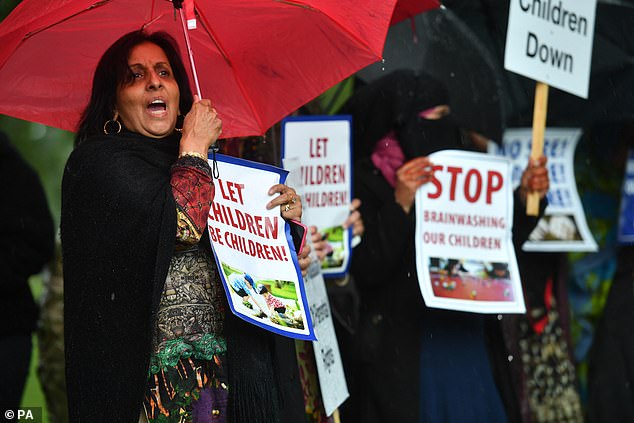 Footage of an imam making false allegations of paedophilia and bemoaning ‘b******t’ LGBT equality teaching was among evidence used to apply for a wider protest exclusion zone around Anderton Park school.

Video clips shown to a High Court judge at Birmingham’s Civil Justice Centre last month also included one of a female campaigner berating the school’s efforts to promote tolerance as an ‘atrocity’.

The footage, released by Birmingham City Council after judgment was handed down on Tuesday, shows lead protester Shakeel Afsar introducing the imam, named in court as Mullah Bahm, asking onlookers to give him a round of applause and then helping him with the microphone.

During the speech, the imam, from Batley in West Yorkshire, tells a crowd including young children gathered near Anderton Park’s main gates: ‘We are very tolerant – but not to this b******t.’

After claiming people of faith are seen as ‘nutcases’ and that people of no faith have the upper hand, the preacher showed a series of pictures – including one of a gingerbread man – supposedly being used in equality teaching.

He then tells the crowd: ‘There are paedophiles in there. This is a paedophilia agenda. What are you telling our children? That a boy can be a girl?

‘Is that what you are going to teach them? And you want us to tolerate it?’

After criticising people supposedly earning up to £500,000 a year for formulating LGBT equality policies, the imam says the protesters have a lot more to do.

As well as video showing how loudly the protests could be heard both inside Anderton Park school and in its grounds, the court was presented with clips of a woman claiming children were being taught to touch themselves inappropriately.

In one of the videos, the woman, standing in a street near the school but outside of an interim exclusion zone, tells a smaller crowd of onlookers: ‘What is this abomination being taught to our children… it is a corruption of society as we know it.

‘The hands of innocent children are being taught to fornicate themselves. And it’s abomination. It is important to have the right to have our children to be removed from such atrocities.’

During last month’s week-long hearing, Jonathan Manning, representing the city council, submitted that a positive relationship between parents and the school, highlighted by Ofsted in 2017, had been disrupted by ‘confrontational’ protests and ‘totally irresponsible’ social media campaigning.

Inviting the court to extend an existing ban on protests to two further areas of land on a road near the school, Mr Manning said: ‘It’s clear that the conduct in question is such as to satisfy the definition of anti-social behaviour and public nuisance.’

The incidents at Anderton Park Primary School in Birmingham were among those highlighted in research on ‘hateful extremism’ which called for more to be done to tackle the problem.

In October, Sara Khan, who leads the Commission for Countering Extremism, said the Government’s response was ‘inadequate’, ‘unfocused’ and urgently needed a complete overhaul.

The independent adviser to the Government was set up after the 2017 terrorist attacks in London and Manchester.

It carried out a survey, visiting towns and cities across the country, which found there was a category of extremist behaviour which differed from terrorism and violent extremism.

It named this ‘hateful extremism’ and described the behaviour as anything which could ‘incite and amplify hate’, make the ‘moral case for violence’ and could put people at risk of harm.

Such behaviour may direct ‘hateful, hostile or supremacist beliefs’ by groups perceived to be a threat to ‘well-being, survival or success’, the report said.

Researchers looked at problems in Birmingham, meeting councils and head teachers to see how similar incidents could be tackled in the future.

The findings cited protests outside Parkfield Community School and Anderton Park at the beginning of the year.

The report said: ‘We heard the threat of Islamist agitation in the area was constant and had recently intensified around the teaching of LGBT+ relationships content in primary schools,’ adding that there was ‘evidence of protests at other schools nationwide’.

Response from politicians to the incidents had been mixed and there was a ‘widely held perception that local and central government failed to support head teachers by responding to recent protests and other issues quickly and resolutely’.

In March Anderton Park was forced to close early before half term to protect children.

The case went to court after attempts at formal mediation broke down.

Many parents ‘sought to raise legitimate concerns about what they thought their children were being taught and did not engage in any hateful behaviour’, the report said, but it added: ‘A senior member of staff at Anderton Park told us that some Muslim protesters threatened other Muslim parents that they will burn in hell for refusing to sign a petition against the teaching.

‘Parents that disagreed with the protests or support the teaching of LGBT+ content have been intimidated into silence.’

While the courts found some of the protesters had gone beyond lawful limits, some religious leaders condemned the tone of the protest and called for more constructive dialogue, but ‘certain religious fundamentalists’ had ‘exploited the issue to entrench social division’, the report said, as it cited ‘deeply hate-filled’ commentary from Islamist group Hizb ut-Tahrir on the subject.

The report added: ‘While people are entitled to hold religious beliefs about homosexuality being sinful, engaging in hateful and dehumanising language and behaviour towards LGBT+ people and those who support them is unacceptable.

‘Sexual orientation is a protected characteristic under the Equality Act 2010.

‘Elements of the protesting appear to be underpinned by a hatred of LGBT+ people and a conviction that it is not possible to reconcile Islam (and other faiths) with support for LGBT+ people.

‘Islamist groups like Hizb ut-Tahrir are using this and exploiting the tensions in Birmingham to promote their belief that Western liberalism is a threat to Islam.’

The report found children’s education was suffering as a result of the unrest with many missing lessons, while the pupils who continued to attend ‘had to contend with inflammatory daily protests at the gate of their schools’.

‘Some children may have internalised offensive messages conveyed by the protesters.

‘Head teachers we spoke to said that children had been chanting slogans in the corridors at school that they had heard from protesters.’