At least 12,000 Greeks took to the streets of Athens on Saturday during an annual demonstration marking the 45th anniversary of a 1973 student revolt against a US-backed junta.

The march was held amid tight security with more than 5,000 officers deployed and drones and a police helicopter hovering over the central Syntagma Square, which has often become a battleground in previous demonstrations.

Some marchers held banners with slogans denouncing fascism, imperialism, NATO and US foreign wars as well as austerity.

Protesters took to the streets of Athens on Saturday during a demonstration, heading to the US consulate, Thessaloniki, in north Greece 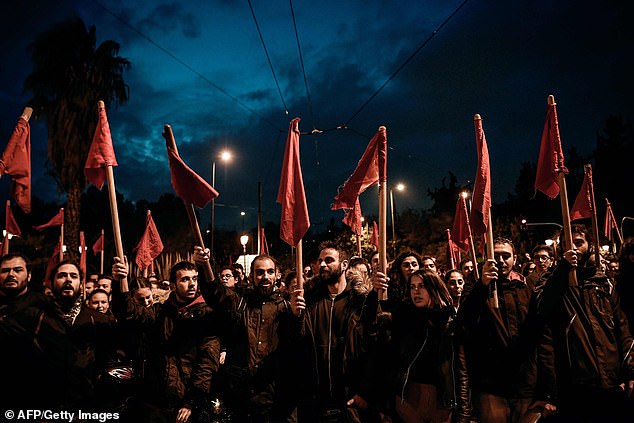 The demonstrators were paying homage to the victims of a 1973 uprising against the military junta that ruled Greece from 1967 to 1974. The 1973 uprising at the Athens Polytechnic saw at least  24 people killed 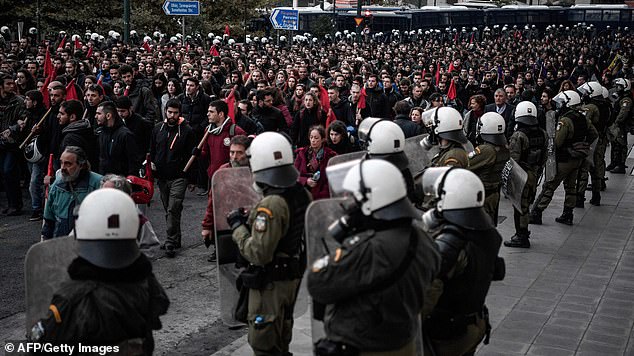 The march on November 17 was held amid tight security and saw more than 5,000 officers deployed to the central Syntagma Square 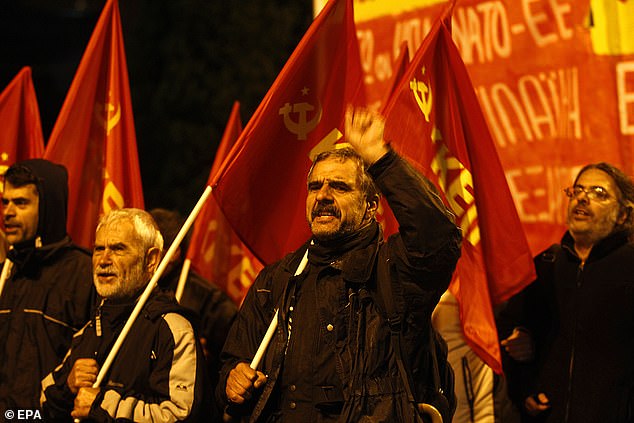 Protesters were seen shouting slogans during a demonstration, in front of the US embassy, in Athens. Events were being held throughout Greece to mark the 45th anniversary of the student uprising of 17 November 1973

There were also some 7,500 demonstrators in Greece’s second largest city Thessaloniki.

At least 24 people were killed in the 1973 military crackdown on the student uprising at the Athens Polytechnic. The event is generally considered to have broken the junta’s grip on power and helped the restoration of democracy.

In recent years demonstrators have used the anniversary to voice opposition to the harsh austerity measures imposed on Greece by its international creditors after the global financial crisis. 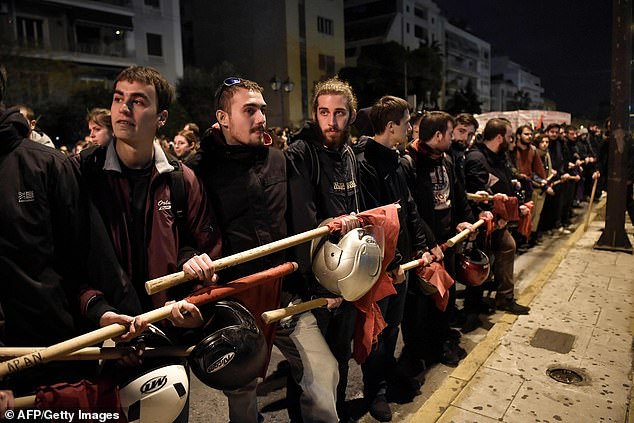 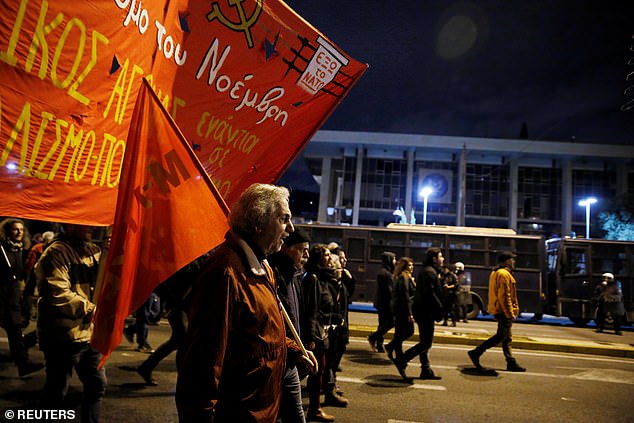 Protesters shouted chants as they marched to the U.S. embassy during a rally marking the 45th anniversary of a 1973 student uprising against the military dictatorship that once ruled Greece 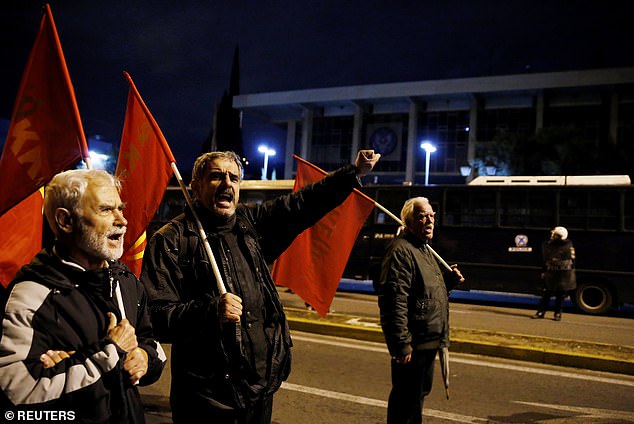 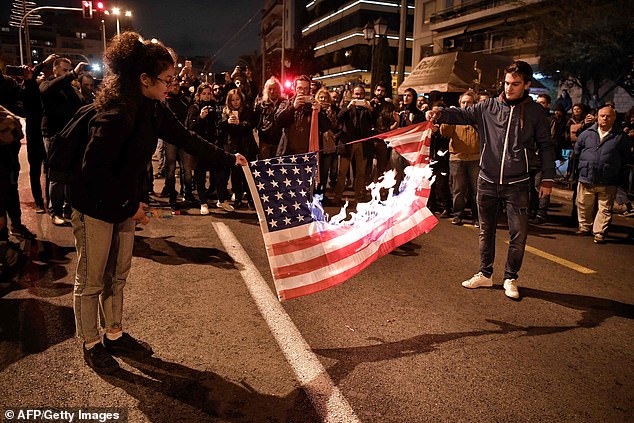 Protesters burnt a U.S. flag during Saturday’s annual demonstration outside the American embassy

‘This anniversary means a continuous battle for our freedom, for our democracy and shows how timeless the slogans we chant are, ‘ Maria Marougadaki, a doctor protesting in Athens told AFP.

On Friday, youths gathered outside the Athens Polytechnic booed a group of government officials over the austerity measures and prevented them from paying their respects at the memorial to the victims of the uprising. 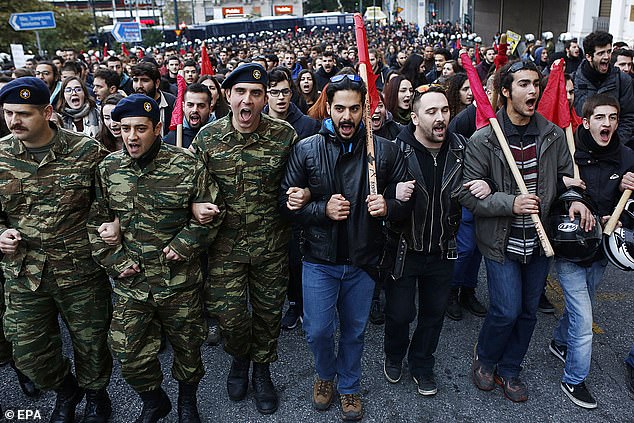 Protesters and soldiers locked arms and sang chants as they head to the US embassy, in Athens, Greece 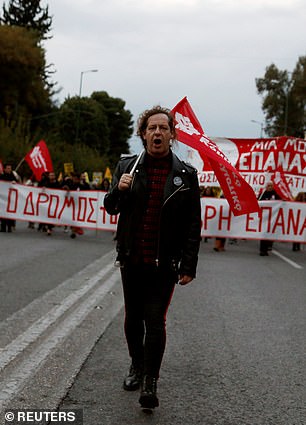 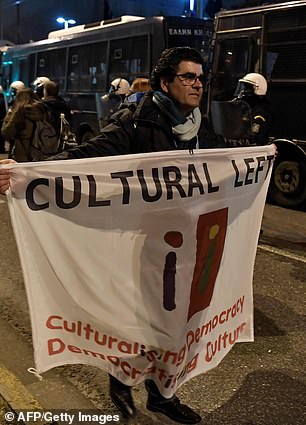 Protesters were sen shouting slogans as they marched to the U.S. embassy during Saturday’s rally. There were said to be some 7,500 demonstrators in Greece’s second largest city Thessaloniki 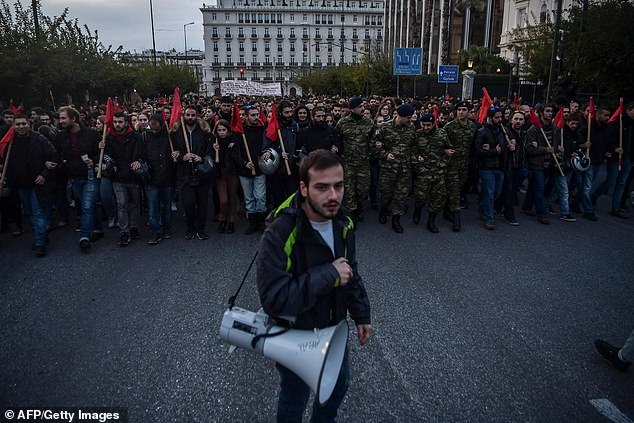 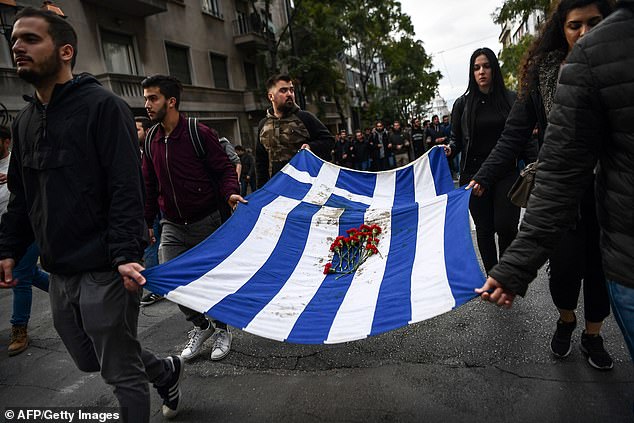 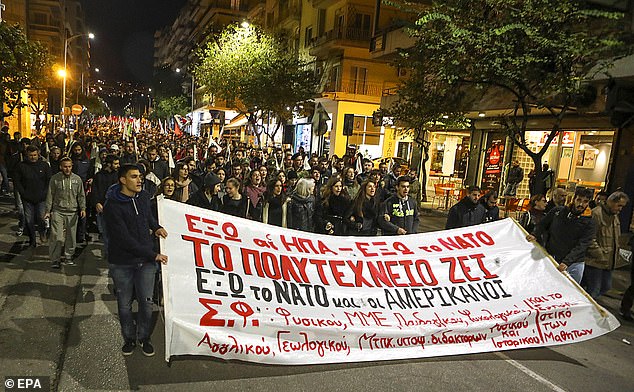 He called for ‘new fights’ against fascism, the far right and ‘neo-liberal absolutism’.

The anti-junta demonstration is a treasured anniversary for many Greeks.

The bloodstained Greek flag that flew over the Polytechnic that night is traditionally carried through the streets during the demonstration in the capital.

Following the rally commemorating the 1973 students uprising against the US-backed military junta clashes were seen breaking out between demonstrators and petrol bombs were hurled in downtown Athens. 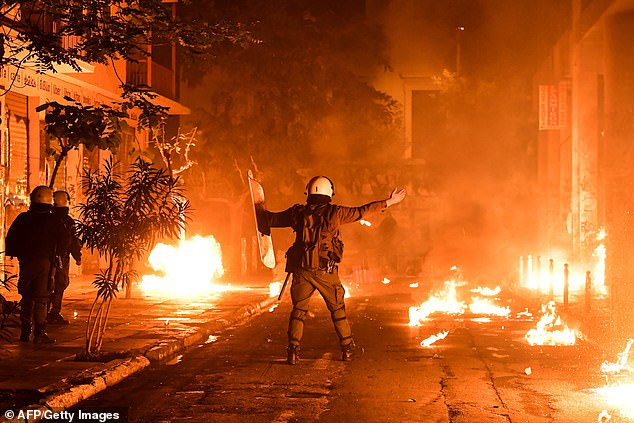 An anti-riot policeman was pictured walking past flames as a petrol bomb exploded in downtown Athens. Following the rally commemorating the 1973 student revolt clashes were seen in the city 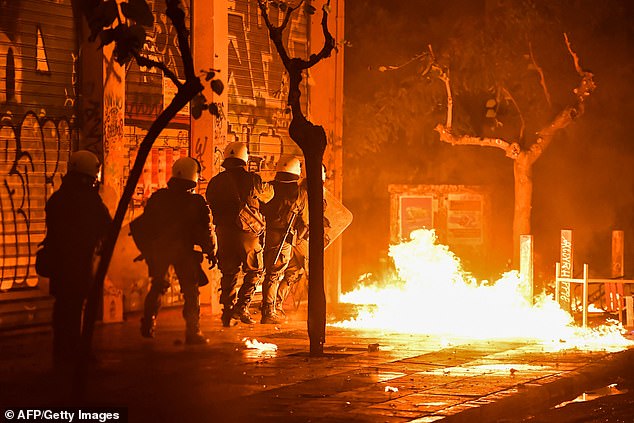 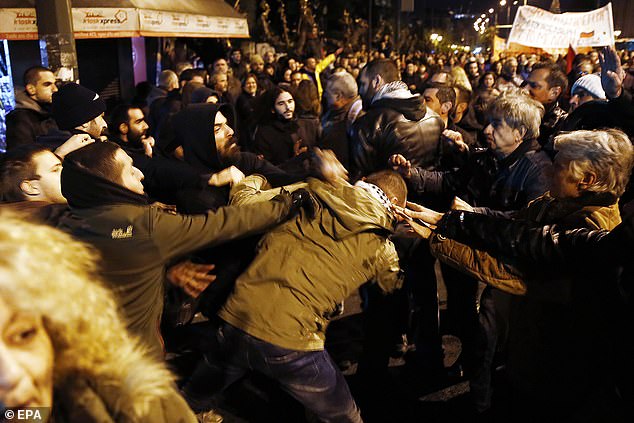 Young anarchists clashed with members of the SYRIZA ruling party during a demonstration, in front of the US embassy, in Athens, Greece, on November 17 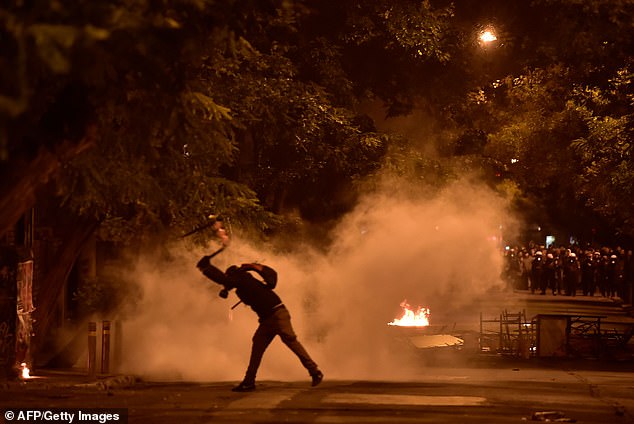 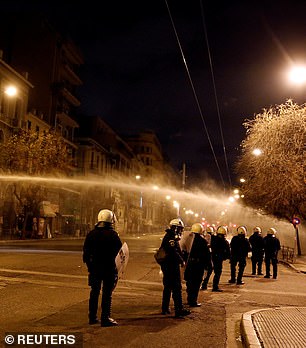 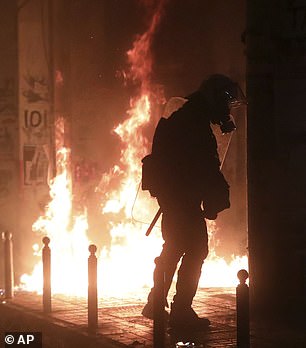