Protests from BOTH sides hit the Capitol ahead of Kavanaugh hearing

Protesters both for and against Supreme Court nominee Brett Kavanaugh have taken to the streets on Capitol Hill and across the country as both he and accuser Christine Blasey Ford prepare to testify.

The highly anticipated Senate Judiciary Committee hearing on Thursday inflamed passions across the nation, as Kavanaugh defended himself from claims he attempted to rape Ford in the 1980s.

‘Solidarity speakouts’ to support Ford and ‘survivors everywhere who have been silenced’ were planned for noon in dozens of cities, with a moment of silence to be held at 12.30pm, organizing group Women’s March said.

The group instructed participants to wear all black and write the words ‘I Believe’ on the palms of their hands.

Demonstrators against US Supreme Court nominee Judge Brett Kavanaugh protest at the Hart US Senate office building in Washington, DC on Thursday as the Senate Judiciary Committee hearing was about to begin 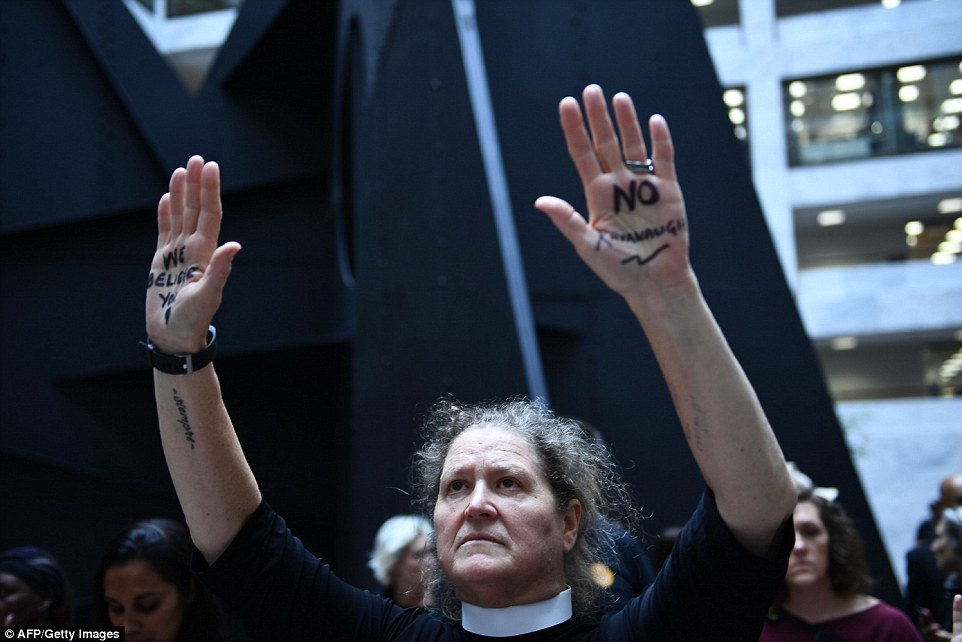 An anti-Kavanaugh demonstrator protests outside the Hart Building Thursday. Protests were set for noon across the nation 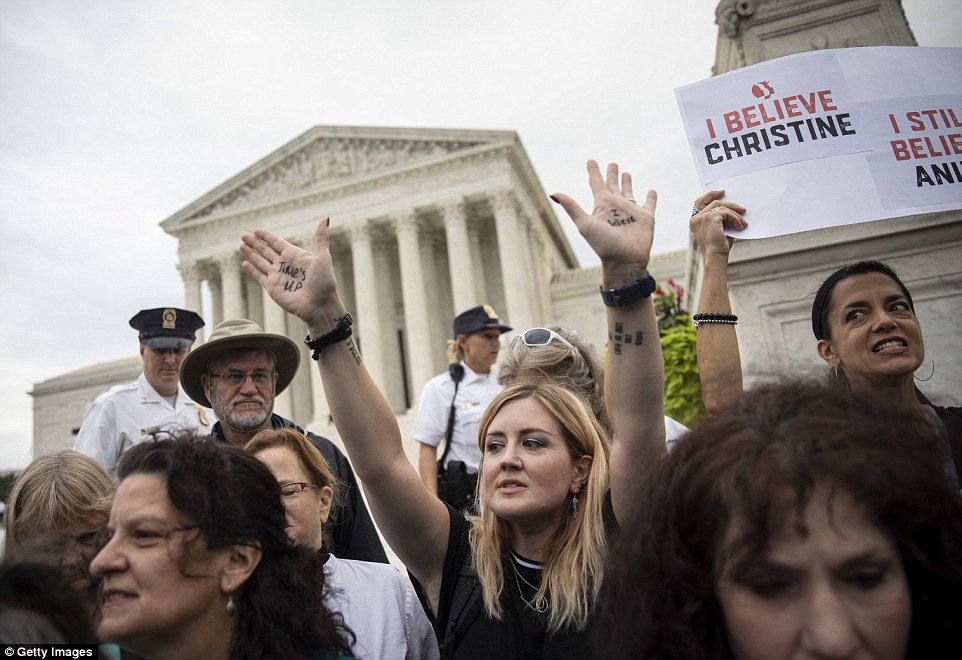 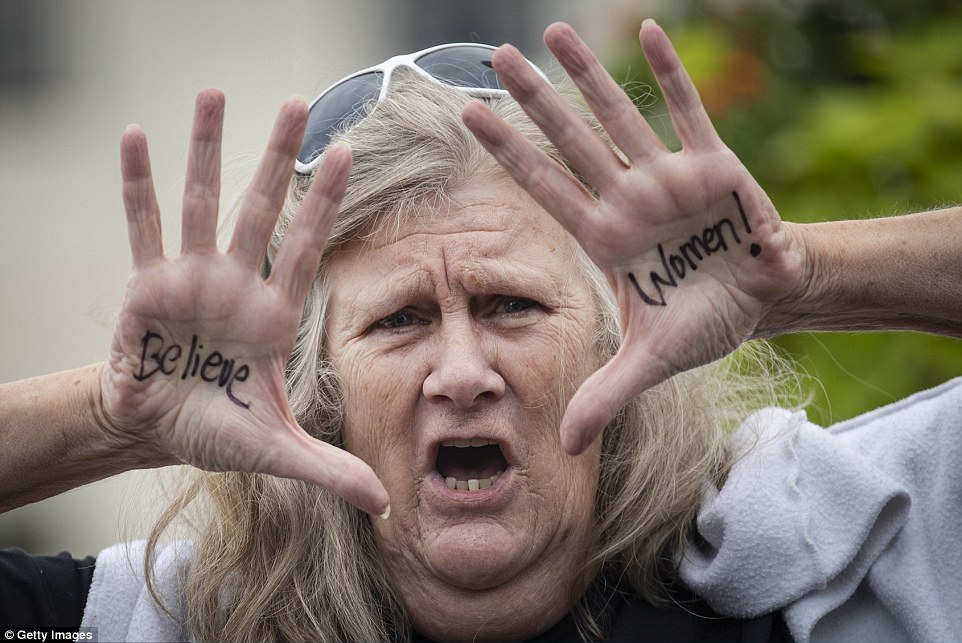 ‘During the minute of silence, hold your hands high to show the message ‘I BELIEVE’ written on your palms,’ the group urged its supporters.

Meanwhile, conservative group Women For Kavanaugh arrived on Capitol Hill at 8.30am in a show of solidarity with President Donald Trump’s nominee.

‘The other side is pulling out all the stops and it’s important that their voices aren’t the only ones being heard,’ the group said in a statement.

Women for Kavanaugh urged participants to wear black or red to the rally, which was held in a park behind the Russell Senate Office Building. 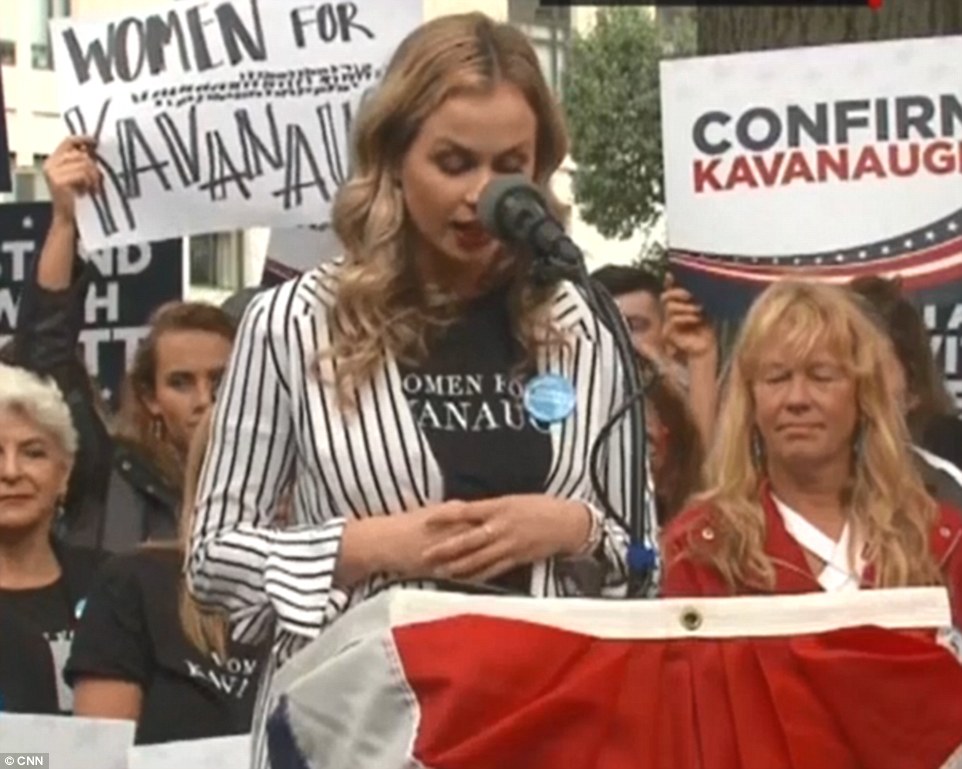 Conservative group Women For Kavanaugh arrived on Capitol Hill at 8.30am in a show of solidarity with the nominee 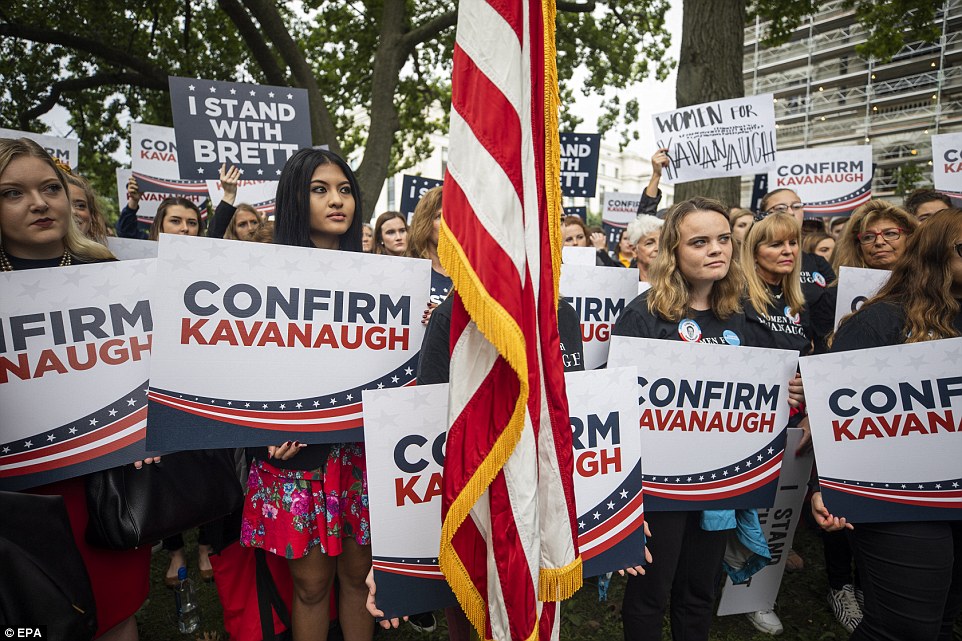 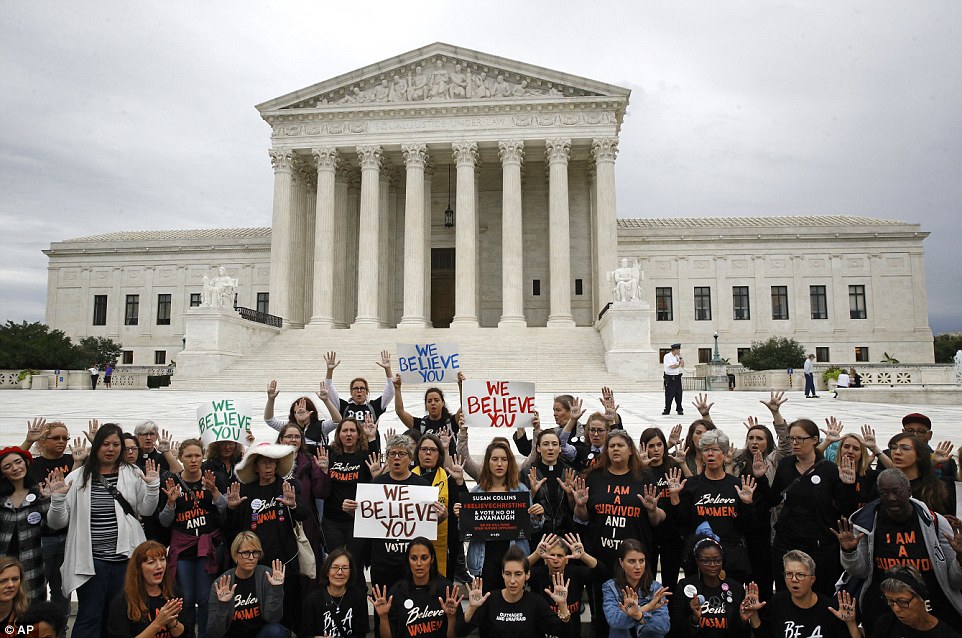 Anti-Kavanaugh protesters gather in front of the Supreme Court on Capitol Hill in Washington, DC on Thursday

Christine Blasey Ford, a university professor, and Kavanaugh, a conservative federal appeals court judge picked by Trump in July for a lifetime job on the high court, are the only two witnesses scheduled for the Judiciary Committee.

Ford, who has yet to speak or appear publicly, will give her account of an alleged incident in which she has said Kavanaugh sexually assaulted her in 1982 at a gathering of teenagers in Maryland when both of them were in high school.

Kavanaugh has denied the allegations by Ford and two other women who have come forward.

A line began to form outside the Senate office building where the hearing is due to begin at 10am.

The all-male Republican majority on the Senate Judiciary Committee has hired a female lawyer with experience prosecuting sex crimes, Rachel Mitchell, to question Ford. Democratic senators are set to ask their own questions. 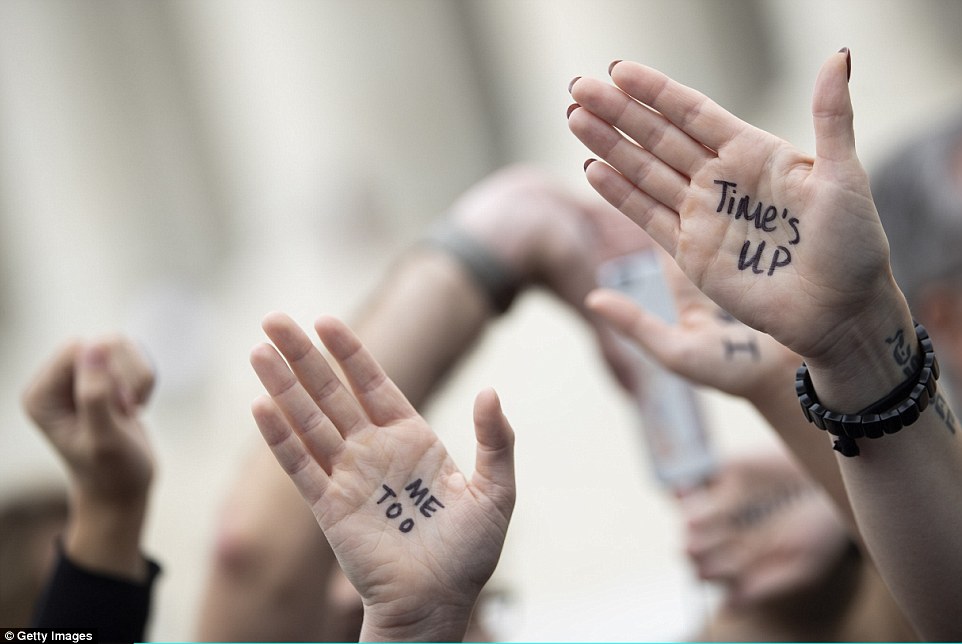 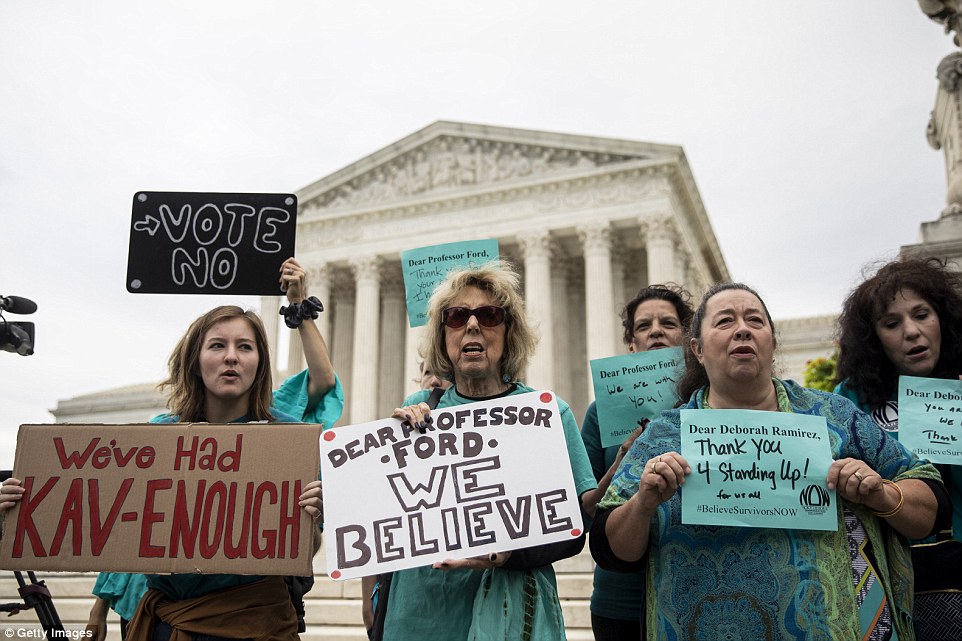 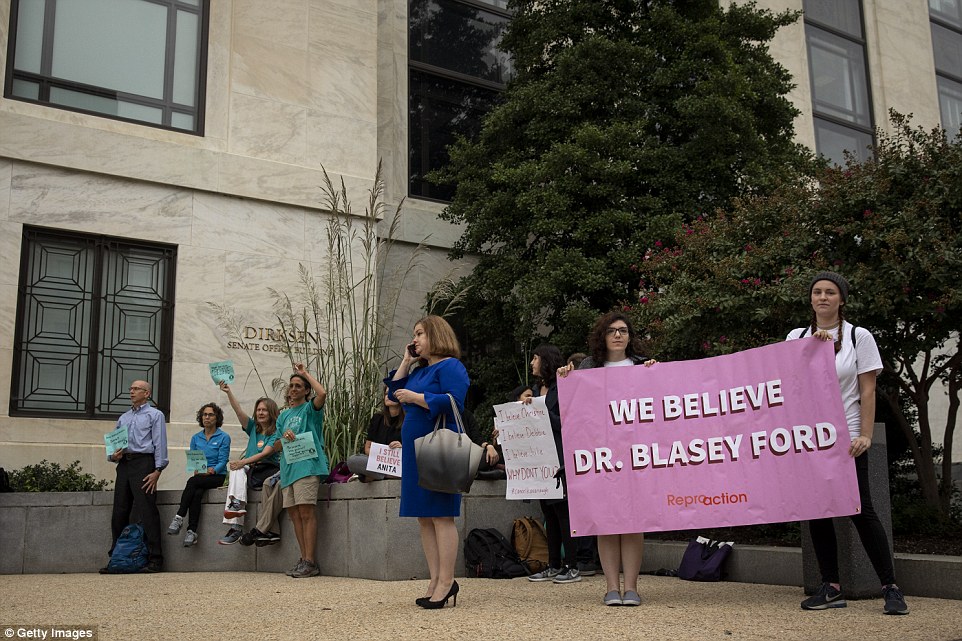 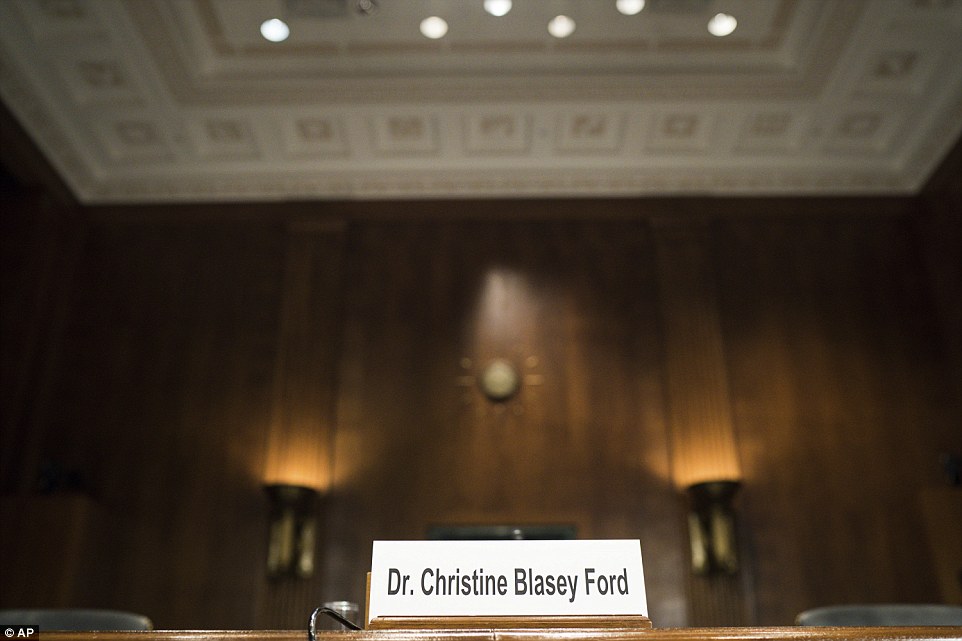 ‘My motivation in coming forward was to provide the facts about how Mr. Kavanaugh’s actions have damaged my life, so that you can take that into serious consideration as you make your decision about how to proceed,’ Ford said in prepared testimony to the committee.

‘It is not my responsibility to determine whether Mr. Kavanaugh deserves to sit on the Supreme Court. My responsibility is to tell the truth,’ she added, adding that she was ‘terrified’ to testify but that she considered it her ‘civic duty’ to relate the details of the incident.

In his prepared testimony, Kavanaugh again ‘unequivocally and categorically’ denied her allegation, as well as ‘other false and uncorroborated accusations’ by his other accusers.

‘Sexual assault is horrific. It is morally wrong. It is illegal. It is contrary to my religious faith. And it contradicts the core promise of this nation that all people are created equal and entitled to be treated with dignity and respect,’ Kavanaugh said. 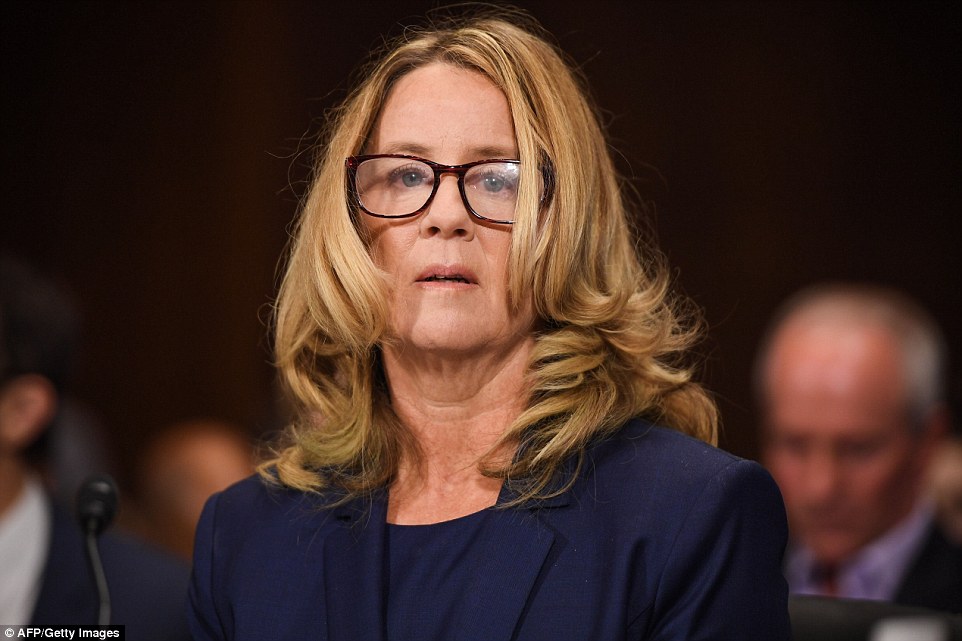 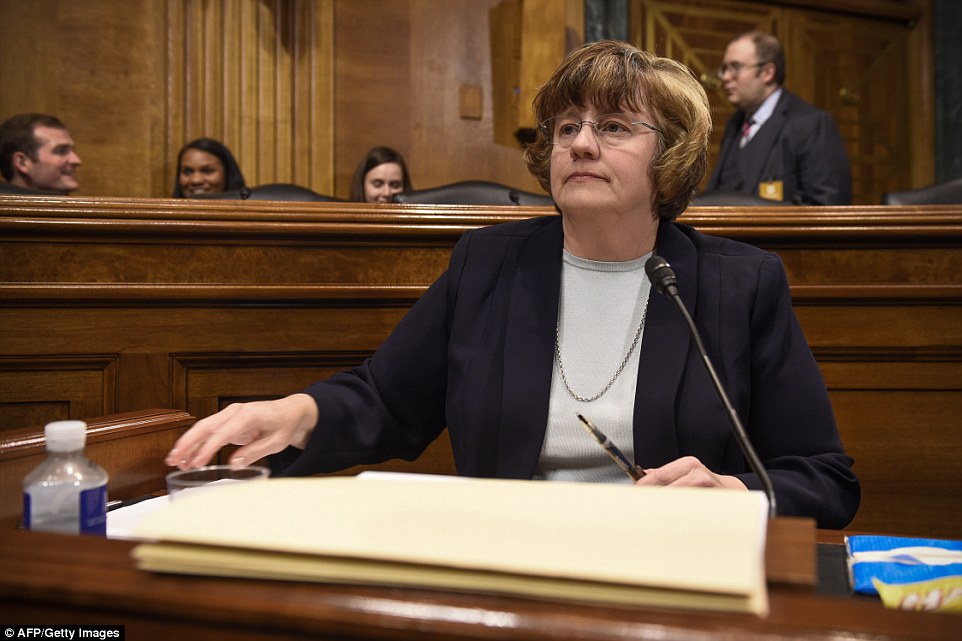 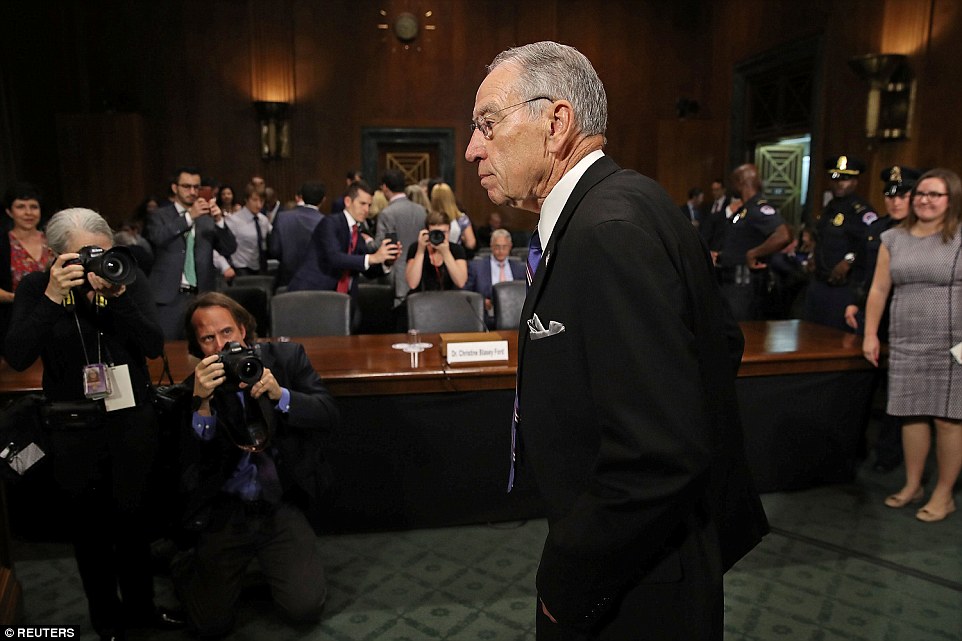 Ford, a psychology professor at Palo Alto University in California, has said a drunk Kavanaugh attacked her and tried to remove her clothing at a gathering of teenagers in Maryland when he was 17 years old and she was 15.

‘Brett groped me and tried to take off my clothes. He had a hard time because he was so drunk, and because I was wearing a one-piece bathing suit under my clothes. I believed he was going to rape me,’ Ford said, adding that Kavanaugh and a friend of his were ‘drunkenly laughing during the attack.’

Supreme Court appointments must be confirmed by the Senate, and Trump’s fellow Republicans control the chamber by a narrow 51-49 margin. That means that a handful of moderate Republican senators who have not announced whether or not they support Kavanaugh could determine his fate. Committee member Jeff Flake is among these.

The committee could vote on Kavanaugh’s confirmation on Friday, with a final Senate vote early next week.

Some Democrats have called on Kavanaugh to withdraw in light of the allegations.