PSG 2-1 Nice: Kylian Mbappe comes off the bench to hand PSG all three points against Nice after Lionel Messi had hit a trademark free-kick in win at the Parc des Princes

By Ap For Mailonline

Kylian Mbappe scored a late winner as defending champion Paris Saint-Germain edged Nice 2-1 to restore its two-point lead over Marseille in the French league on Saturday.

Mbappe pounced on a pass from Nordi Mukiele to beat Kasper Schmeichel with a low strike in the 83rd minute. The France striker tied Neymar as the joint top scorer in the league with eight.

Lionel Messi gave PSG the lead in the 29th with a curling free kick into the top corner from 22 yards. Messi’s fifth league goal was one shy of his league tally last season when he took time to adapt to a new club and struggled with knocks and a bout of COVID-19.

Gaetan Laborde equalized from close range just after halftime after the PSG defense failed to clear a cross from Youcef Atal.

Messi shone with Argentina during the international break by scoring twice against Honduras and twice against Jamaica, and could have added a second goal on the stroke of halftime with a powerful strike that Schmeichel tipped over the bar.

PSG needed Messi’s brilliance because forward Hugo Ekitike, who got his first start this season, proved toothless and didn’t make runs in behind the defense like Mbappe does.

Nice pressed high up the pitch to prevent PSG from creating chances. That defensive ploy worked until the 27th when Messi started a dribbling run, outpacing Mario Lemina before taking on Dante, who tripped the Argentina playmaker and conceded the free kick that led to the opening goal. 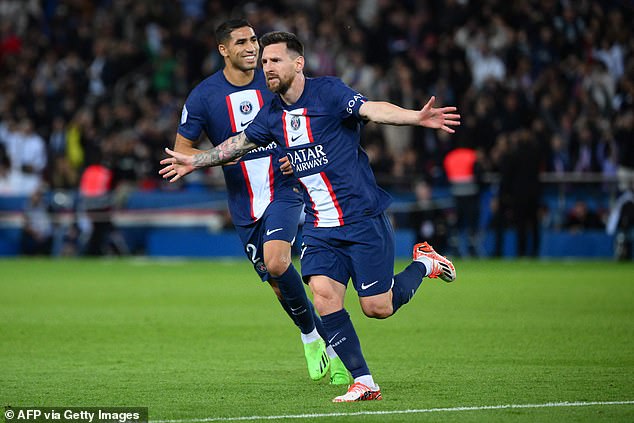 Ahead of a key Champions League match at Benfica next week, PSG rested Mbappe and Nuno Mendes until both came off the bench in the second half.

Also, Rennes is starting to gel after an uneven start to the season, climbing to fifth place after beating 10-man Strasbourg 3-1.

Strasbourg defender Gerzino Nyamsi was sent off for planting his studs into Benjamin Bourigeaud’s thigh with his follow through after clearing the ball in the 28th. That was not long after veteran striker Kevin Gameiro had a goal disallowed for offside.

Arnaud Kalimuendo took advantage in the 38th by controlling a cross from Adrien Truffert to fire into the bottom corner on the turn. Rennes doubled the lead with a low strike from Martin Terrier in the 49th. Kalimuendo set up Amine Gouiri for the third goal in the 61st.

“We are refinding our rhythm from the end of last season,” Terrier said. “There were new signings, they needed time to settle in.”

Rennes signed mobile strikers Kalimuendo from Paris Saint-Germain and Gouiri from Nice in the summer to replace the departing Gaetan Laborde, a more traditional center forward.

Strasbourg managed a consolation goal from a penalty by Habib Diallo in the 72nd after Rennes right back Hamari Traore brought down Gameiro. They remained in the relegation zone and the only winless team in the league. 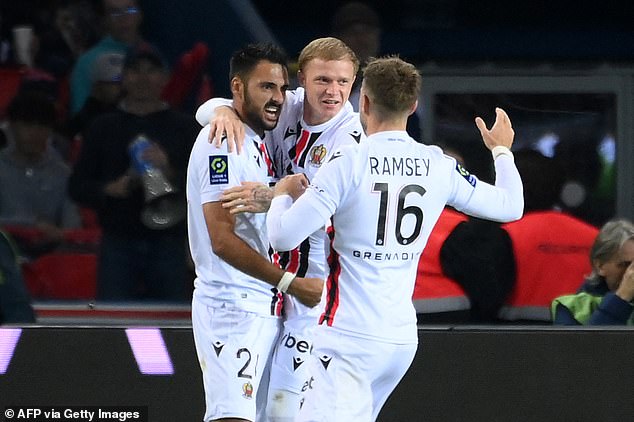