PSG young talent Ismael Gharbi had a moment he will never forget on Thursday when Mauricio Pochettino invited him to meet his idol Lionel Messi in training.

The 17-year-old midfielder, who only made his professional debut on August 1 coming on as a substitute in the Trophée des Champions loss to Lille, was a little starstruck as he was involved in training yesterday.

And when he told Pochettino that six-time Ballon d’Or winner Messi – who signed a two-year £1m per season deal this week – was his idol, the first-team boss took him over to meet the man of the moment, and Gharbi heartwarmingly said: ‘If you need something, I am here for you!’ 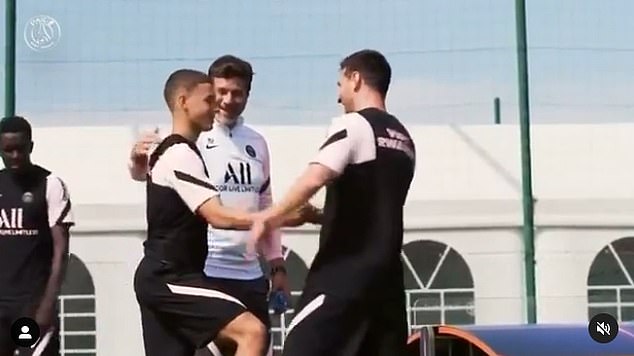 With boss Mauricio Pochettino present, Gharbi said: ‘If you need something, I am here for you!’

The all-time great walked out onto the pitch yesterday for the first time since Argentina’s Copa America final triumph earlier this summer, and was put through his paces at PSG’s Camp des Loges training complex.

Despite only arriving in Paris on Tuesday, he is reportedly already desperate to feature this weekend.

His return from downtime was marked with simple exercises, with Messi’s workload set to gradually increase while he gears up for the new season. The run-out caught on camera saw him race towards some cones and high-five a coach.

‘I’ve been out of action for around month and I need to get physically ready. I hope to be ready as soon as possible, because I can’t wait to play,’ Messi admitted during his official unveiling at the Parc des Princes.

According to Marca, Messi was keen to hit the ground running in France and make a positive impression. He did just that after reporting to the club’s facility almost two hours early, at 9.15am, to take in his new surroundings. 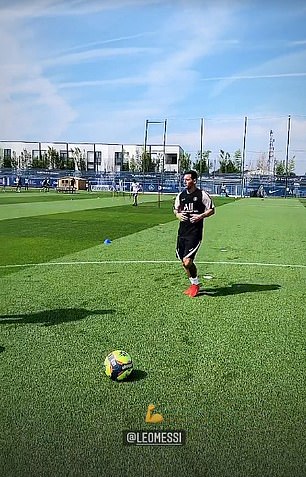 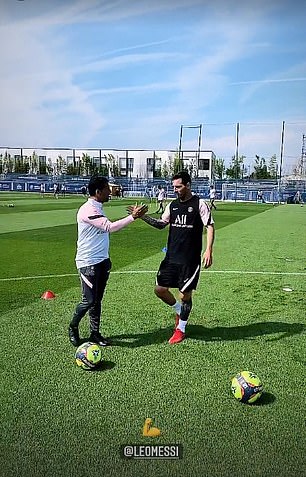 RMC in France have even claimed that the clearly-eager Messi wants to be a part of PSG’s squad for their league fixture against Strasbourg this Saturday, despite his lack of a pre-season after returning from his holiday.

It is said Messi wants to be starting games as soon as possible, although the club’s coaching staff would prefer him to work on his sharpness first.

The same outlet suggests his keenness may be a ‘publicity stunt’ to allow him to prove his desire to start work immediately after his move. 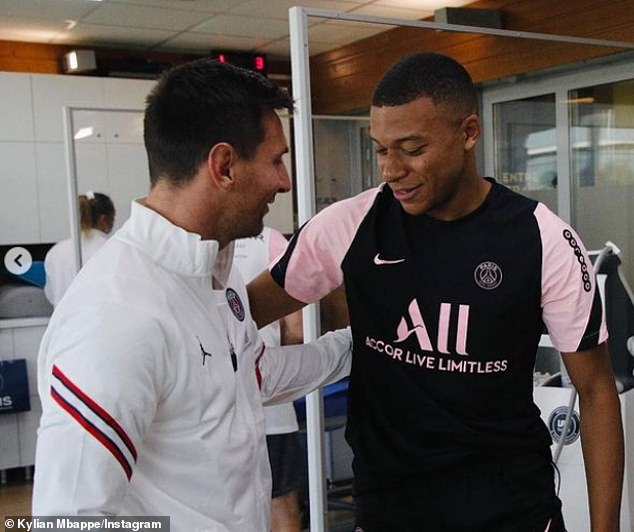 Meanwhile, before training he was also introduced to the squad, including his strike partner Kylian Mbappe. The young ace shared a photo of them greeting each other on his own Instagram account, with the caption: ‘Welcome to Paris, Leo.’

His expectations are set high, after he openly claimed he has moved to Paris to target a fifth Champions League win – while refusing to admit whether his new team are the favourites to lift the trophy.

‘The best teams in the world have not won the Champions League, it’s a special competition,’ he said. ‘My objective is to lift another Champions League and I’m at the right place to do it.’