If Tuesday night saw us learn anything from Paris Saint-Germain’s Champions League clash with Liverpool it is that the French side are well choreographed when it comes to being fouled.

But it appears for the likes of Neymar and Dani Alves that doesn’t all stay on the pitch after the duo performed a synchronised dance to celebrate their crucial 2-1 win over the Reds.

The Brazil striker uploaded a small clip of him and Alves dancing inside the Parc des Princes dressing room following the victory.

Alves also took to the social media site as he posted an image of him, Presnel Kimpembe, Kylian Mbappe and Neymar celebrating on a table inside the dressing room.

The Uruguay star uploaded a post-match celebration photo showing himself and his team-mates involved in the game.

In the photo Neymar is noticeable at the front wearing Alisson’s match shirt having swapped shirts with the Liverpool goalkeeper – the two being team-mates at international level with Brazil. 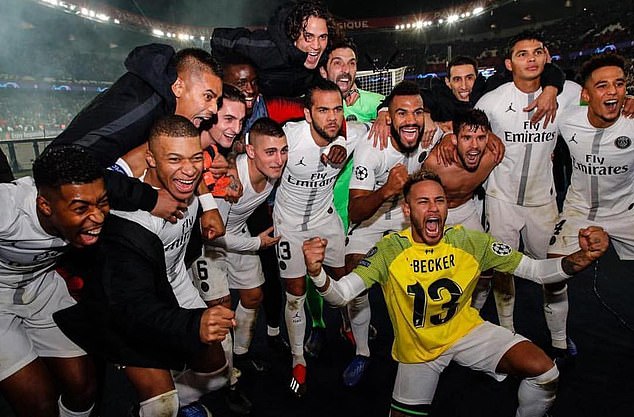 There was plenty to celebrate for the runaway French leaders. Three points were crucial for PSG as a second group stage defeat at the hands of the Reds would have put them out of the competition.

Neymar scored the winner for the home side after Juan Bernat’s opener, with James Milner pulling a goal back from the penalty spot on the stroke of half-time.

Jurgen Klopp was less than impressed with Neymar’s antics on the pitch, with the Reds boss left seething over gamesmanship from PSG.

‘Against sides like that it’s quite difficult to get confidence so we never got 100 per cent into our game,’ said Klopp. ‘And there were 500,000 interruptions in the second half. We are the fairest team in England if you look at the table but (here) we looked like butchers.

‘They were smart, if you want, and the referee let it happen. You can lose in Paris, of course, it will happen to a lot of teams in the future. But it still feels a bit rubbish. But on 11 December we have a proper final at Anfield.’

PSG will now confirm a place in the last-16 if they defeat Red Star Belgrade in their final group game.

Liverpool however must beat Napoli 1-0 or win by two clear goals to reach the knock-out stages.