He made it six goals in Europe so far this season to ensure Barcelona top Champions League Group B with a 2-1 win over PSV.

The Dutch side peppered the Barca goal for 90 minutes but were undone by Messi who scored on the hour and then took the free-kick that Gerard Pique turned in for the second. 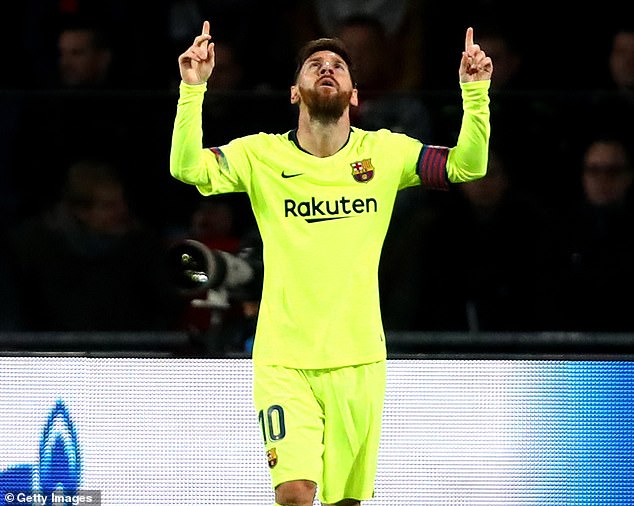 His early season promise to make this Barcelona’s year is looking good so far.

‘Leo has so many different weapons. He comes up with something new every game,’ said Pique after the win.

His opening goal will be the enduring image from this game – a forest of red and white striped shirts and the man on the ball in yellow still finding a way to beat PSV keeper Jeroen Zoet. 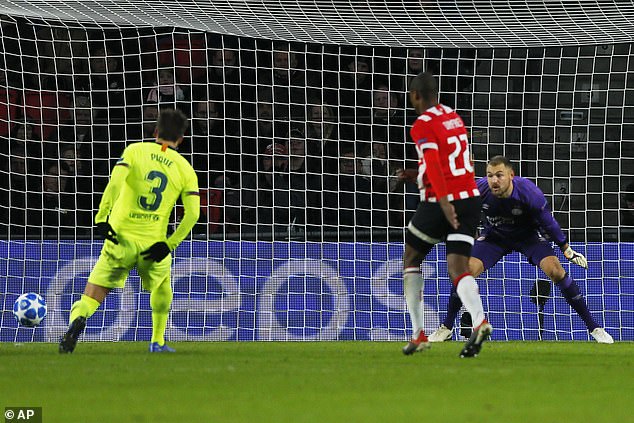 There was an early scare for Barcelona when Sergio Busquets gave the ball away and brought down Hirving Lozano on the edge of the area as he scrambled back to make amends for his error.

Gaston Pereiro tested Marc Andre ter Stegen from the resulting free-kick. The German keeper then had to save from Luuk de Jong as PSV took the game to Barcelona.

PSV were really up for this even though it was only Europa League up for grabs for them. After his two saves Ter Stegen had a Lozano shot whistle past him and ping back off of his post. 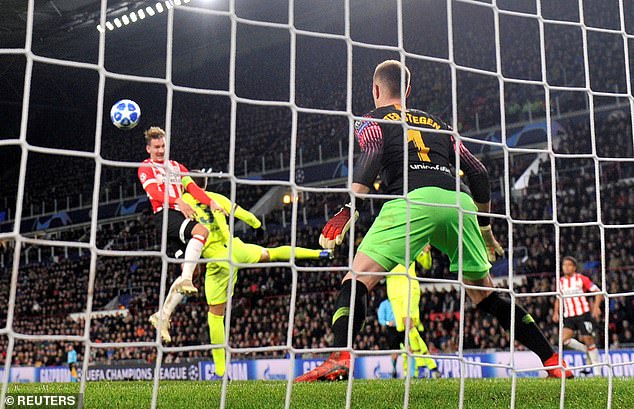 Pereiro was the next to go close with a miss almost to rival Cengiz Under’s last night for Roma against Real Madrid. With only Ter Stegen to beat he put the ball over the bar from four yards out.

PSV had stuck their centre-forward Luuk de Jong on Busquets to stop Barca playing out from the back and it was working.

With ten minutes left of the first half Arturo Vidal came alive with, first a shot and then a header, both cleared off the line. Messi followed that up with his first chances – two shots both well saved by Zoet. 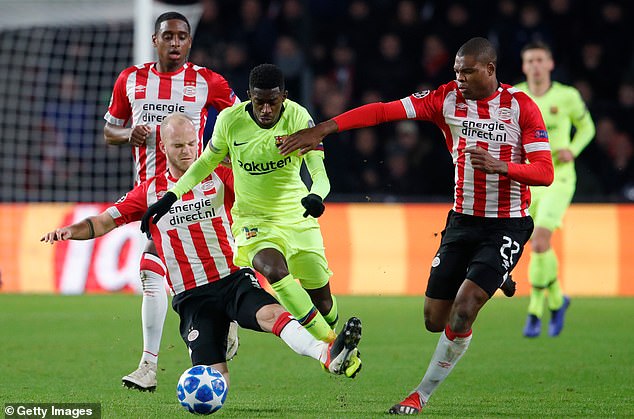 But any sense that Barça were now on top soon evaporated when De Jong hit the crossbar and Denzil Dumfries then hit post in the same attack. No wonder Valverde was on his feet looking concerned as the half time whistle blew.

Messi drew another save from Zoet with the first chance of the second half. He was getting closer and on the hour his goal came. He started the move deep in the PSV half. He swapped passes with Ousmane Dembele and then wriggled into space for a shot past Zoet.

The moment the ball left his boot there were at least five red and white shirts around him – all close enough to be in the picture but none of them close enough to stop him scoring his sixth goal in the Champions League this season. 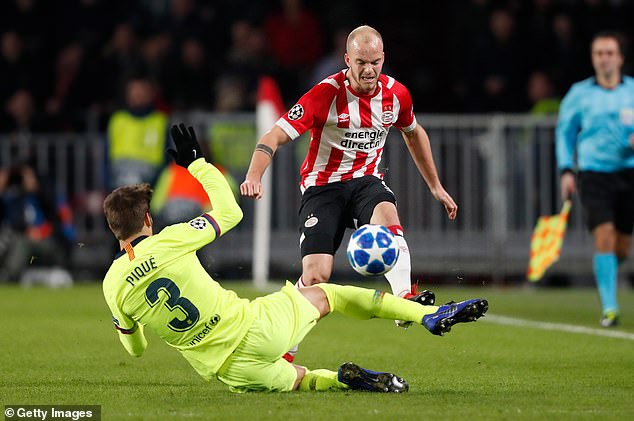 Messi gave the thumbs up to the 250 Barcelona supporters in the Philips Stadium. They had sat through wave after wave of PSV attacks but he had put them in front.

Ten minutes later Pique doubled the advantage. Messi took a free-kick with what appeared to be a shot destined for Zoet’s left-hand corner. Pique changed the direction of the ball prodding it to the keeper’s right. ‘It was smoothing we have rehearsed,’ he said afterwards.

Malcom, on as a substitute, then went close to diverting Dembele’s pass for goal number three. Barça appeared home and dry now but they still needed Ter Stegen to save at the feet of Lozano.

Worst teams than PSV have qualified for the last-16. They were heading out of Europe but they went down fighting and finally De Jong headed home from Angeliño’s cross to narrow the margin.