Psychological toll of having one breast bigger than the other

Jane Wood is counting down the days to summer. She can’t wait to wear strappy sundresses in the sunshine — she’s even looking forward to putting on a bikini.

It’s been a long while since she felt this body confident, though it’s not because she’s been on a diet. Rather, for the first time in years, Jane’s breasts will be the same size.

To many, having lopsided breasts — where one is much smaller or differently shaped than the other — may sound a trivial issue, but Jane is one of a significant number of women who say it can be devastating.

Mismatch: Student Leah Knight, 24, is self-conscious of her uneven cleavage

‘My husband was always reassuring me that he found me attractive, but it was about how I viewed myself, and it made me very self-conscious and unhappy,’ Jane, 46, says.

‘My right breast was at least a cup size smaller than the left and was also a lot saggier.

‘I used to compare it to a wet teabag. When my husband and I were intimate, I’d be thinking about my breast instead of relaxing, and on holiday I hated wearing bikini tops. It didn’t make me feel sexy.’

Jane, who is training to be a psychotherapist and has four children in their 20s, adds: ‘It was really difficult buying bras. I would have to buy for my larger breast, so it never fit my right breast properly.

‘And there was much less volume in my right breast, so if I tried to buy pretty, sexier styles like balcony or plunge bras, all this excess skin on my right breast would just sit there on the top. There was no volume. 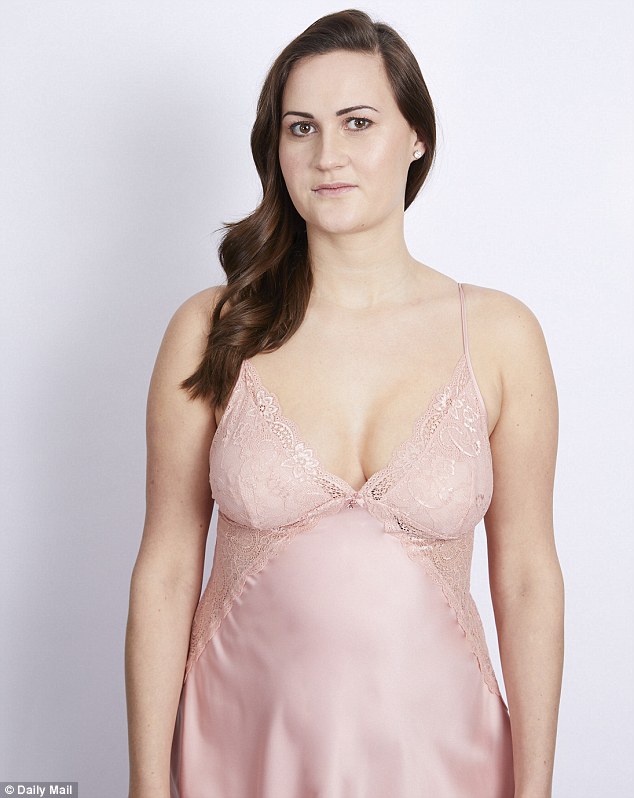 Self-conscious: The student from Brighton told how the condition affects her confidence

‘I was very self-conscious about it. If I was wearing an evening dress, I would be constantly adjusting my right breast to make sure it would stay in place. In photos I would always make sure I was photographed so that you couldn’t see the imbalance.’

She says that she had no problem with her breasts until she decided to lose two-and-a-half stone in her early 40s.

‘My children were grown up, and although I’d always been active and fit, I wanted to reclaim my body properly for the first time since I’d become a mum, so I went on a diet.

‘It was great for my figure, except that while I’d always had very full boobs, I lost a lot of fullness, but I lost much more from the right side than the left side.’

Experts say between 62 and 82 per cent women will have some sort of breast size asymmetry. It’s thought around 25 per cent suffer from significant breast asymmetry — defined by medical experts as one breast being at least one cup size bigger than the other.

Over the years I’ve struggled buying bras, and it’s really affected how I feel about myself. I’m single now, but when I’m in the early stages of a relationship it makes me feel self-conscious and affects my confidence

For some, it is a congenital disorder in which breasts grow with different amounts of fatty tissue, which becomes apparent in puberty.

Dr Jenny Burbage, who researches breast biomechanics at the University of Portsmouth, says other causes are weight loss, pregnancy or breast feeding.

‘It’s been reported that the issue of asymmetry gets worse as breast size gets larger,’ she adds. This is likely because heavier breasts place more strain on supporting skin and tissue.

And with research suggesting that in the UK women’s breasts have increased from an average of 34B in 1967 to a 36DD now — thanks to richer diets, growing obesity and use of hormonal contraceptives such as the Pill — it’s likely that more of us are being affected by wonky boobs.

As we reach the end of our childbearing years, breasts also change as glandular tissues start to shrink as they become redundant for breastfeeding.

While skin elasticity starts to decline from our 20s, hormonal changes during the menopause, when oestrogen levels drop, means collagen and elastin levels rapidly deplete, so breasts are more likely to become saggier.

Dr Burbage adds: ‘Research suggests that for most women with an asymmetry, the left breast will be the larger one. One theory is it may be related to the heart being on the left side, too, increasing blood flow to this area.’

For most, having slightly different size breasts is an aesthetic niggle. But Dr Burbage says that for women who have breasts that are different cup sizes, wearing a bra which doesn’t support one side properly may worsen the asymmetry, as tissue and skin stretch more on the smaller side. 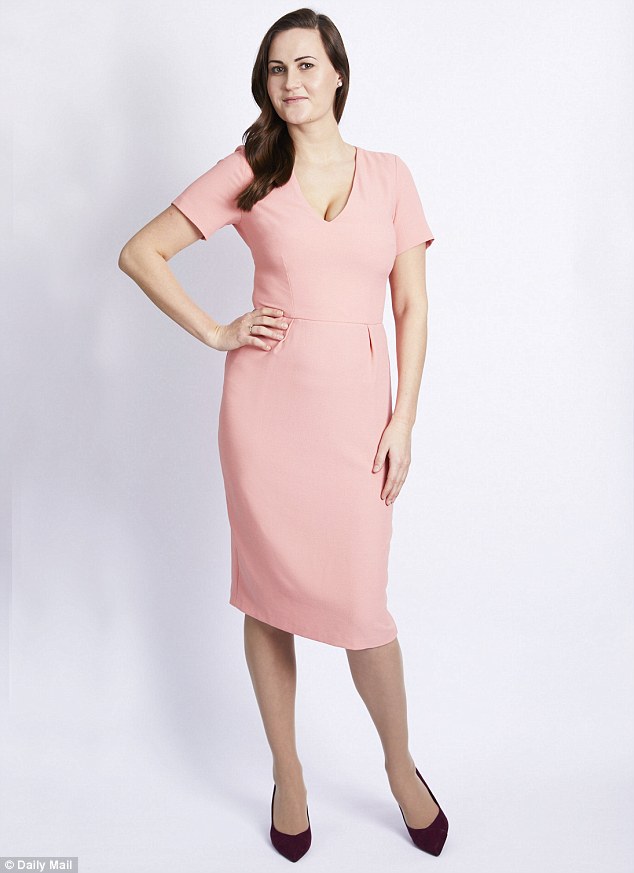 Daily struggle: Leah, pictured, will have a fat transfer procedure  to correct the problem

But as Jane attests, while buying bras and clothes is a challenge, what is more demoralising is the psychological impact.

Leah Knight, 24, a student from Brighton, has felt desperately self-conscious about her figure since she was 15, when a girl at school commented on her lopsided breasts in the PE changing room. ‘It’s played on my mind ever since,’ she says.

Leah says not only are her boobs different sizes — the right side is about two cup sizes smaller than the left, which is a 32E — but the right one is also a different shape.

‘Over the years I’ve struggled buying bras, and it’s really affected how I feel about myself,’ she says. ‘I’m single now, but when I’m in the early stages of a relationship it makes me feel self-conscious and affects my confidence.’

Like many young women, Leah would love to be able to go out in strappy, sexy tops or dresses that don’t require a bra, but says she fears her lopsided breasts would be just too obvious.

Unfortunately, for women like Jane and Leah there are no cheap and easy solutions — apart from using so-called ‘chicken fillet’ pads to pad out their bra.

While ensuring you wear a well-fitting, supportive bra will help prevent future sagging, the only way to rectify lopsidedness is with surgery.

Mum never realised how it was making me feel. But when I said it had been affecting me so much I had been researching surgery, she gave me her blessing, and said she would pay for it

He says: ‘This fat transfer surgery is combined with a more familiar procedure, liposuction, to produce naturally lifted and enhanced breasts. If the fat cells are placed under the skin in small tunnels, the cells will increase the size of the breast.’

Fat transfer procedures eliminate some side-effects associated with silicone or saline implants — which include a higher risk of certain cancers and potential leakage — and gives a more natural result.

It is, however, still expensive and carries the risks associated with going under the knife under general anaesthetic.

Leah is undergoing the procedure later this month, with her mum, Mandi, footing the bill.

‘Mum never realised how it was making me feel. But when I said it had been affecting me so much I had been researching surgery, she gave me her blessing, and said she would pay for it.’

Jane can certainly attest to the transformative power of surgery.

She spent £9,200 on liposuction and fat transfer with Dr Hamza and is delighted with the results. ‘I saw two surgeons about having an implant, but after speaking to Dr Hamza, I knew this was what I wanted to do,’ she says.

‘He said he could do a fat transfer, which had fewer potential side-effects and should need no further treatment.’

Unlike implants, which need to be replaced every ten to 20 years, fat transfer should have permanent results.

Jane admits her husband of 24 years, Mark, 56, a community nurse, tried to talk her out of it because of the risks associated with surgery, but when she remained determined he agreed to support her.

On December 14, she had the two-hour operation, which involved removing fat from the front of her thigh and waist and injecting it into the tissue. It left three tiny scars.

Now the healing is well advanced, how does she feel?

‘Delighted,’ she says. ‘Both my boobs are where they should be, and they don’t look lopsided. I can’t wait for summer.’