Doctors said Bhola Shankar, from Bundi in Rajasthan state, India, was lucky to be alive after gobbling down the two-inch spikes.

At least 116 iron nails, which somehow did not pierce his stomach, were recovered from the 43-year-old’s body.

While he was in the hospital, doctors discovered the man had also been eating other pieces of metal including wires – but could not explain how they ended up inside his body.

Surgeons had to remove more than 100 nails from a man’s intestines after an X-ray (pictured) revealed the his unusual habit in Rajasthan, India 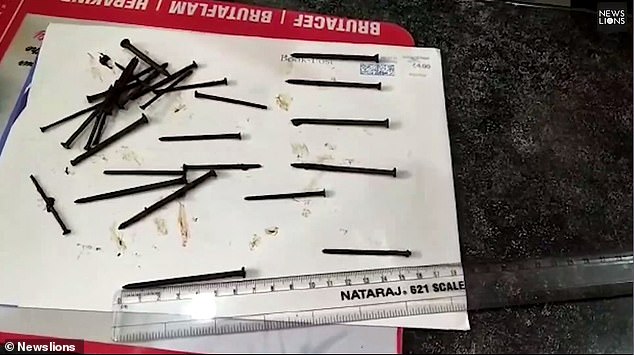 At least 116 iron nails measuring around two-and-a-half inches long, which miraculously did not pierce his stomach, were recovered from the 43-year-old’s body

He was brought into the Bundi government hospital and deemed psychologically unwell after an X-ray revealed his unusual habit.

The patient – who is thought to be schizophrenic – had reportedly kept it a secret from his family.

Dr Anil Saini, who led a team of doctors as they conducted the operation, said it was the first case of its kind in Rajasthan.

The team also shot a video of the operation, which showed nails being extracted from the intestine of the patient.

He also revealed the patient had been swallowing wires and ‘other sharp metal objects’.

He added: ‘The patient is not able to narrate how the nails ended up in his intestine.

‘He is lucky the sharp objects did not puncture his organs or it could have proved fatal.’ 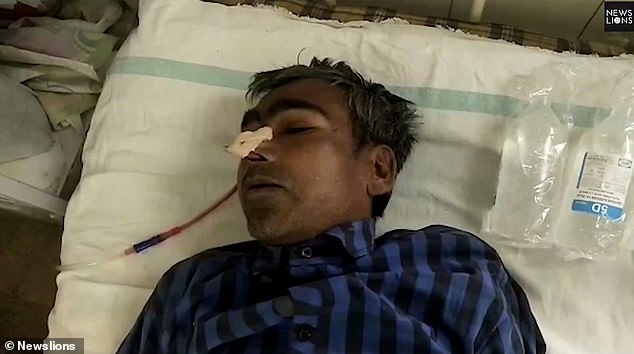 Bhola Shankar, who is believed to be schizophrenic, is recovering well after the lengthy operation 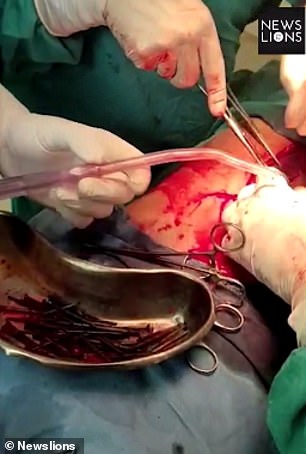 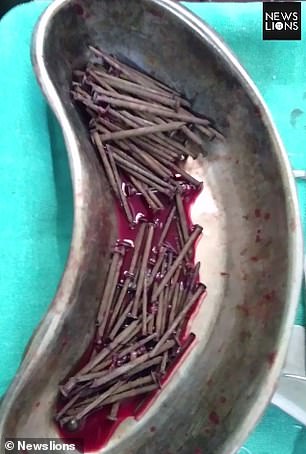 The team of doctors filmed the gruesome procedure (left). They retrieved around 116 nails from his intestine (right)

The patient’s younger brother said he’d been taking medicine for mental illness for the last two and a half decades.

Despite the lengthy operation, the patient was recovering well.

In 2017, surgeons retrieved 639 nails from a schizophrenic man’s intestines using a magnet.

The 48-year-old patient, also from India, was brought into hospital after vomiting repeatedly and complaining about pain in his stomach.

Schizophrenia is a chronic and severe mental disorder that affects how a person thinks, feels, and behaves.

People with schizophrenia may seem like they have lost touch with reality.

The cause of schizophrenia is not understood and it is believed to be a mix of genetics (hereditary), abnormalities in brain chemistry and/or possible viral infections and immune disorders.

The symptoms of schizophrenia fall into three categories: positive, negative, and cognitive.

Positive symptoms are disturbances that are ‘added’ to the person’s personality and include:

Negative symptoms are capabilities that are ‘lost’ from the person’s personality and include:

Cognitive symptoms are changes in their memory or other aspects of thinking and include:

Figures suggest around one percent of the world population suffers from schizophrenia with around two million in the US.