A pub has been trolled by thirsty punters after it forced them to sit in its car-park-turned-beer-garden without any tables as local watering holes raise their shutters for the first time in three months.

The Brass Button in Motherwell, near Glasgow, was branded Scotland’s worst pub on social media as disappointed drinkers turned up to find a few chairs sandwiched between stinking bins and graffiti-covered walls in a roped off area of its car park.

And The White Elephant, near Glasgow, has also been mocked for its beer garden after revellers began fighting between parking pays in its so-called beer garden.

Many pubs across the UK have converted their car parks into beer gardens to bring in more customers, with local communities often rallying around the businesses and complimenting their ingenuity.

Pubs in England threw open their doors on what has been dubbed Super-Saturday last week, with those in Scotland following suit on Monday.

The Brass Button in Motherwell, outside Glasgow, has been accused of having the worst beer garden in Scotland. Punters turned up to find chairs placed in a car park 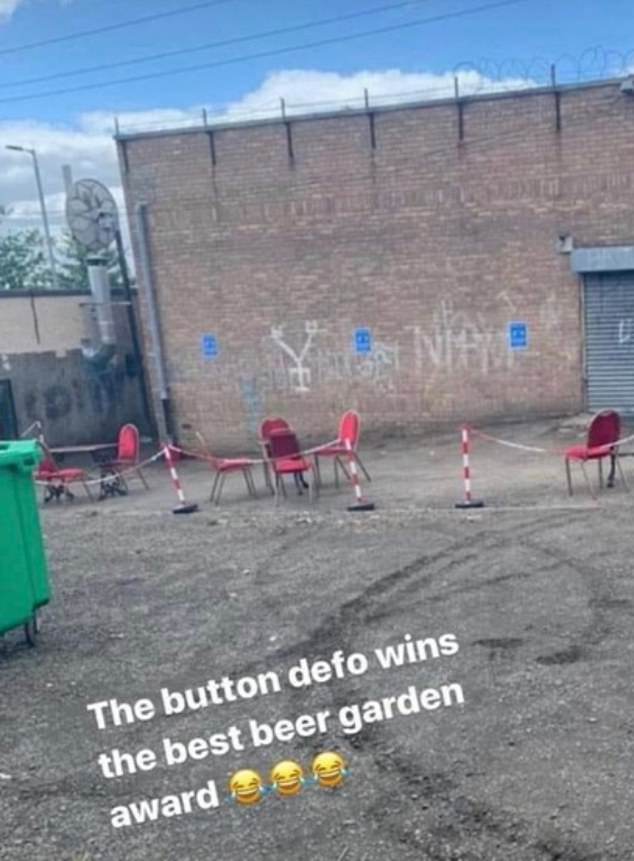 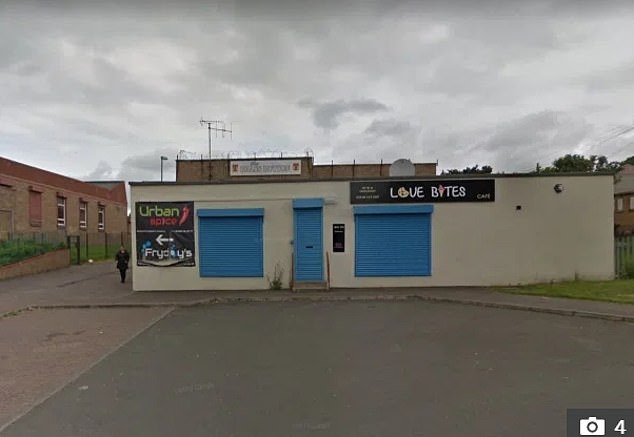 The Brass Button is said to be popular in the area, and well-known for its cocktails

The Brass Button, which is popular for its cocktails, was blasted as Scotland’s worst pub.

And another quipped: ‘Must’ve been trying to work out which table would be best.’

As Scottish pubs threw open their doors yesterday, a video posted online showed a fight breaking out at the White Elephant, as a man lay spreadeagled on the floor clinging to another man’s leg while fellow punters tried to pull them apart.

At one point, a reveller is seen pushing his hand into the spreadeagled man’s face, pinning him to the ground, before suddenly withdrawing.

Shouts and yells can be heard in the background, as one individual howls, ‘Get off!’ and another screeches ‘liar!’ at the group.

Other drinkers can be seen quietly sipping their drinks at tables as they ignore the commotion just a few feet away. 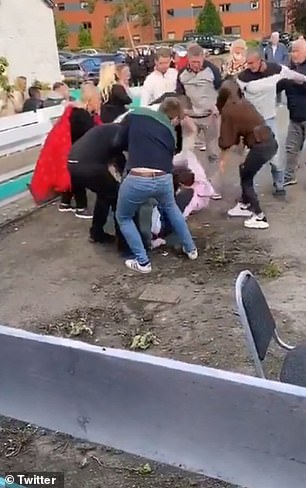 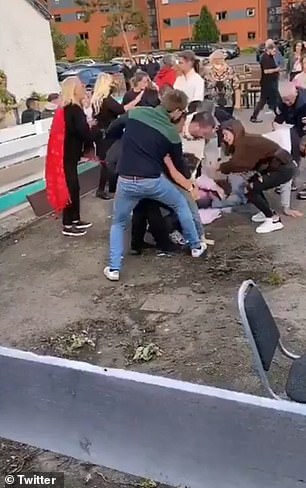 A fight also broke out at the White Elephant, Glasgow, as thirsty punters indulged in their first drink for more than three months 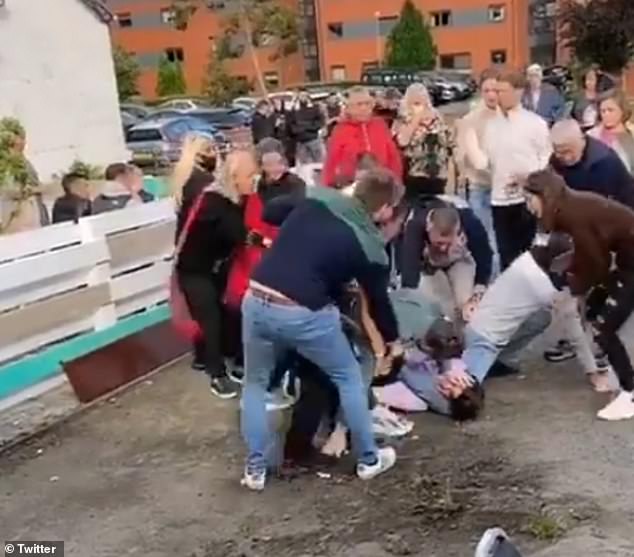 At one point, a man pinned another to the ground by putting his hands on the man’s face

The clip was posted to For Scotland’s Sake with the caption: ‘Scenes in a Scottish beer garden yesterday.

‘It seems us Scots are just as likely to get drunk and fight the moment we were allowed near a pub. No social distancing to be seen either.’

Have you been to a car-park-turned-beer-garden? Send your photos to luke.a.andrews@mailonline.co.uk

The pub’s beer garden, which is a collection of industrial chairs and tables, has also been slammed on social media.

‘Beer garden? Looks like the entrance to the local scrap yard… no pun intended,’ said one twitter user.

And a third added jokingly: ‘Such a lovely beer garden, they are just messing it up.’

Other pubs have, however, seen punters rally round in support as they convert car parks to beer gardens in order to provide more seats for customers.

One pub in Yorkshire was congratulated for placing socially distanced picnic tables in its car park alongside a bar.

Customer Alison Rodgers tweeted a picture, and said: ‘This is what social distancing looks like in Yorkshire village pubs.

‘Our local had 128 people booked in throughout the day yesterday, turned the car park into a beer garden.

‘It was good to be able to support our local. Not a managed pub, this is their home and business.’ 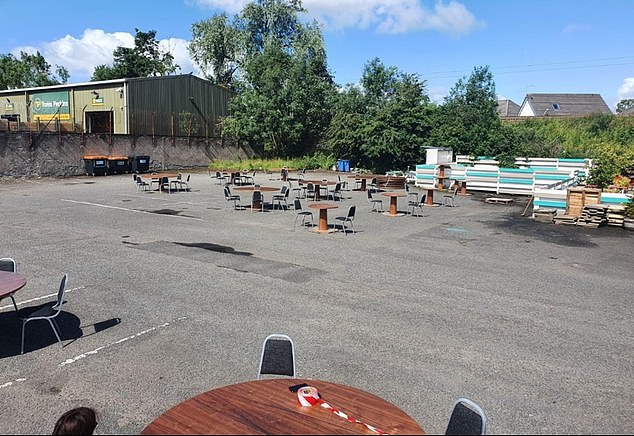 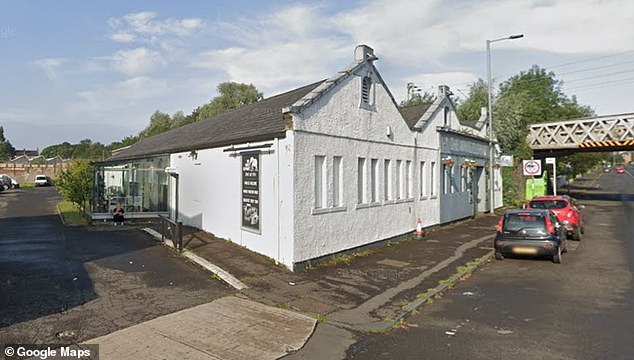 Pictured above is the White Elephant, Glasgow, as viewed on Google Maps

The Starting Gate in Merseyside has also been praised for its ‘fab’ car-park-turned-beer-garden.

‘It’s been hard work and we definitely could not of got to the finish line without the help of our regulars and girls,’ they said on social media.

One drinker commented: ‘Absolutely amazing bud, you should be proud as punch, best pub and atmosphere for a pint.’

Another said: ‘Looks great, well done to everyone involved!’

And a third added: ‘Can’t wait to come for a pint!’ 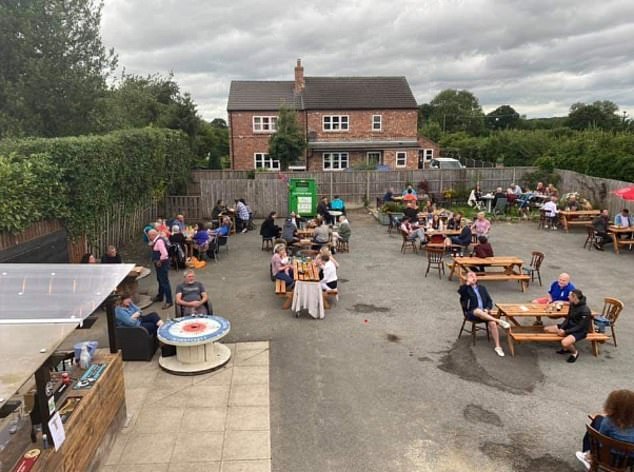 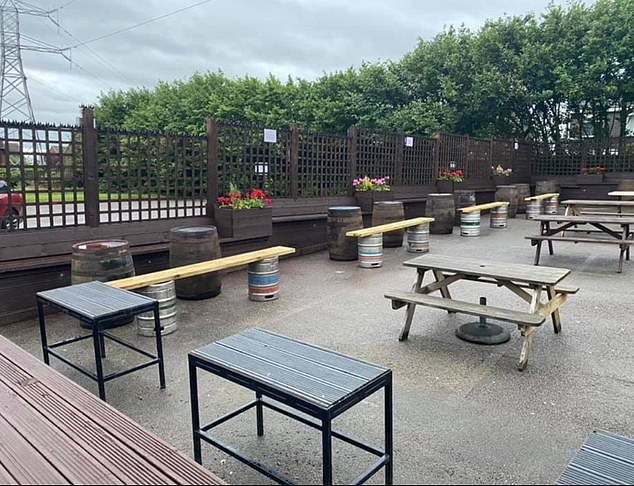 Social distancing regulations in Scotland require pubs to serve drinkers outside, with many pubs scrambling to ‘build’ beer gardens for this.

Police Scotland said it was called to the White Elephant but when it arrived there was no evidence of a fight.