A mugshot posted on Facebook by police went viral after the public mercilessly mocked the wanted man’s bizarre haircut.

West Midlands Police shared a photo of James Flynn, from Birmingham, on their official Facebook page on Wednesday.

Police say the 28-year-old is wanted in connection with harassment and making threats.

The image was published the latest addition to an album showing photographs of people wanted for questioning.

But it quickly went viral and has attracted 23,000 comments and was shared more than 11,000 times.

Many of the comments saw the page’s followers ridicule Flynn’s hairdo – separated strands of hair flattened down and coming forwards along the top of his head.

Some likened it to a supermarket barcode like those at Aldi, which wrap around the goods for fast scanning at the tills.

Dean Philp added: ‘All that’s missing is the numbers underneath his hair and he’d look like a bloody barcode.’

Kieran Gladwish joked: ‘Scanned this picture and just got charged 5p for a bag.’ 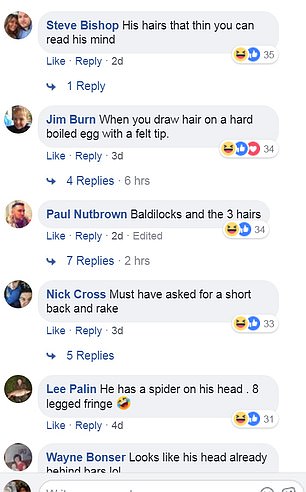 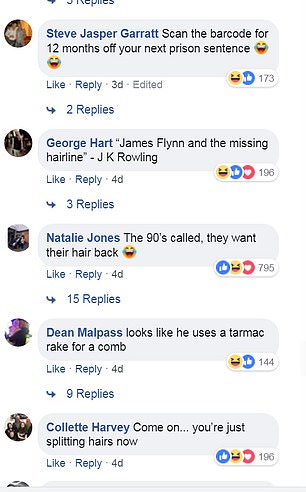 Many Facebook users ridiculed Flynn’s hair, with some likening it to a supermarket barcode 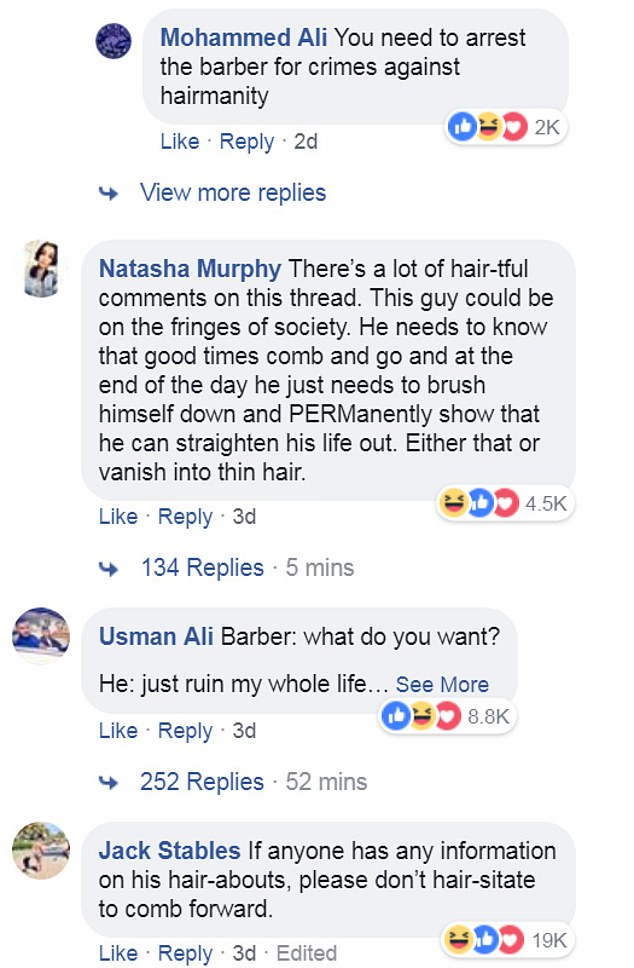 Another joked: ‘You need to arrest the barber for crimes against hairmanity.’

‘There’s a lot of hair-tful comments on this thread. This guy could be on the fringes of society,’ she wrote.

‘He needs to know that good times comb and go and at the end of the day he just needs to brush himself down and PERManently show that he can straighten his life out. Either that or vanish into thin hair.’

Another person joked: ‘If anyone has any information on his hair-abouts, please don’t hair-sitate to comb forward.’

West Midlands Police responded to the wave of comments.

‘Hello, It’s great to see everyone getting involved and talking part in #WantedWednesday,’ they wrote.

‘Please don’t forget to take a look through all our wanted suspects who are top our Christmas list this year!’

Anyone with information can contact police via Live Chat at west-midlands.police.uk between 8am to midnight, call 101 or contact Crimestoppers anonymously on 0800 555 111.