Gianfranco Zola could not hide his delight as Italy advanced to the final of Euro 2020 with their penalty shoot-out win over Spain.

The semi-final at Wembley went to penalties after Alvaro Morata’s 80th minute equaliser cancelled out Federico Chiesa’s opener for Italy earlier in the second-half.

Manuel Locatelli missed Italy’s first spot-kick, but they scored their next four as Morata and Dani Olmo missed for their opponents. 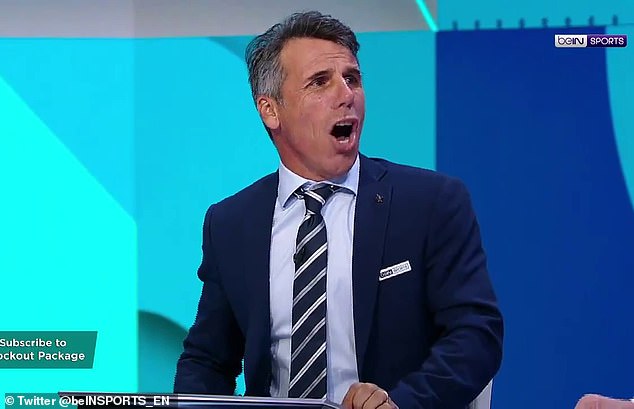 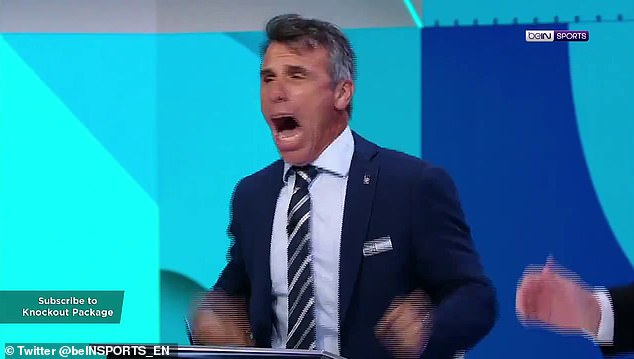 Chelsea’s Jorginho scored the decisive spot kick, much to the delight of club legend Zola.

The 55-year-old who made 35 appearances for Italy, was part of the punditry team for beIN Sports.

After the game the broadcaster showed footage of Zola’s reaction as he jumped to his feet and started wildly pumping his fists.

Zola disappeared off camera before coming back and giving one final fist pump before hugging former Chelsea team-mate Ruud Gullit.

Watching himself back, Zola said: ‘That’s not, that’s not me, I apologise,’ to which he was told not to apologise by former Sky Sports pundit Andy Gray.

Peter Schmeichel who was also part of the punditry team admitted he was ‘jealous’ of Zola.

The former Manchester United goalkeeper won Euro 1992 with Denmark, who could get to the finals once again if they beat England at Wembley on Wednesday.

He said: ‘I’m a little bit jealous now. You’ve made it through, it must have been a really hard watch. I’ve got all that coming.’

The winner of England’s semi-final with Denmark will face Italy in the final at Wembley on Sunday.