Pupils could be sent home for joke COUGHING

Pupils face being disciplined for coughing at classmates, using another year group’s toilets or even joking about coronavirus.

As many schools prepare to reopen tomorrow, strict new behaviour policies have been introduced to enforce social distancing requirements.

Parents have been warned that their children could be suspended from school if they cannot abide by some of the rules designed to reduce the risk of infection.

And with many schools deciding it is unsafe to put badly behaved children together in detention or alternative classrooms, they will be sent home.

One of the most punitive behaviour policies has been introduced by Ark Alexandra Academy in Hastings, East Sussex, which makes it clear that even playground jibes about the pandemic are banned.

In a letter home this month, Jerome Scafe, an associate principal, set out the school’s new ‘coronavirus red lines’.

Pupils face being disciplined for coughing at classmates, using another year group’s toilets or even joking about coronavirus. Pictured: Pupils at Longdendale High School in July

It warned: ‘The following behaviours may result in a fixed-term exclusion: deliberate or malicious coughs/sneezes at any point; humorous, inappropriate comments or statements related to the coronavirus; purposeful physical contact with any other person; repeated failure to follow instructions within an appropriate timeframe resulting in the student needing to be removed from lesson.’

Byron Academy in Acton, West London, has a new behaviour policy which states: ‘Some behaviours (eg coughing deliberately on another person) that were previously ‘simply’ anti-social, are now potentially extremely serious.’

A pupil who ‘wilfully ignores or refuses to follow instructions relating to hygiene routines and social distancing between year group bubbles’ will be moved and if teachers conclude it is putting others at risk ‘then parents should expect that their child may be excluded’.

And John Flamsteed Community School in Derby said: ‘Students will have specific lavatories that they can use at break and lunchtime – this must be adhered to.

‘Should a student decide not to respect these, this will be treated as a very serious disciplinary matter.’

Around the country, pupils will have to get used to very different rules.

Most schools will require them to arrive in their PE kit on days when they have sport but some have introduced exercise activities such as yoga for which they will not need to change out of their school uniform. 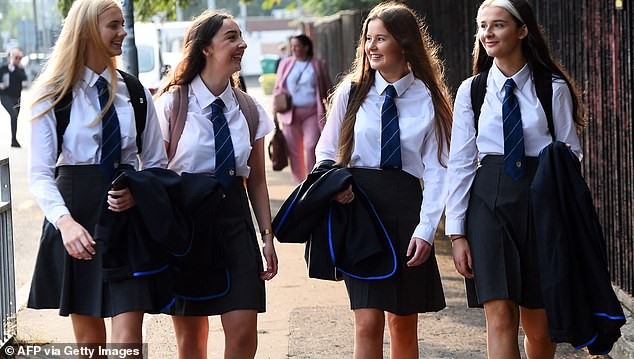 As many schools prepare to reopen tomorrow, strict new behaviour policies have been introduced to enforce social distancing requirements. Pictured: Pupils at Holyrood Secondary School in Glasgow this month 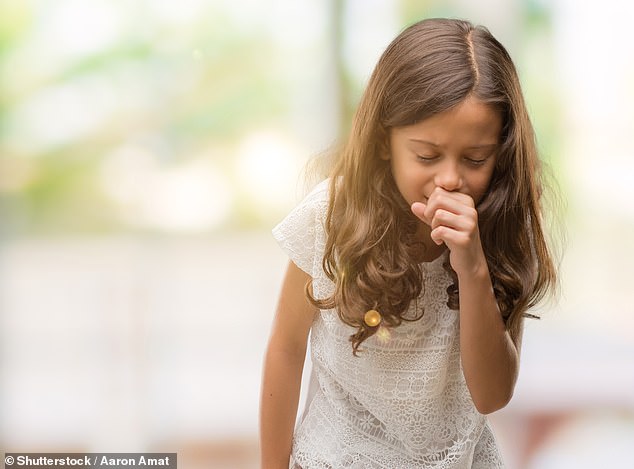 One of the most punitive behaviour policies has been introduced by Ark Alexandra Academy in Hastings, East Sussex, which makes it clear that even playground jibes about the pandemic are banned. Pictured: Stock image

All schools are asking pupils to go back to wearing uniform but some say it must be washed every day and that ties must not be worn to avoid infection.

Others are bringing in coloured lanyards to make it easier to identify members of different year groups.

Many children will have to spend all day in the same classroom, even eating lunch at their desks, to avoid mixing with other groups. Books and bags are banned in lots of areas but pupils attending Charter Academy in Portsmouth will be weighed down.

It said: ‘As our water fountains will remain switched off, we recommend that your child brings a two-litre water bottle or two one-litre bottles so they have plenty to drink during the day.’

North Ormesby Primary Academy, in Middlesbrough, has put a the short film on the internet so that pupils can see what awaits them when they arrive through the gates again on Thursday. 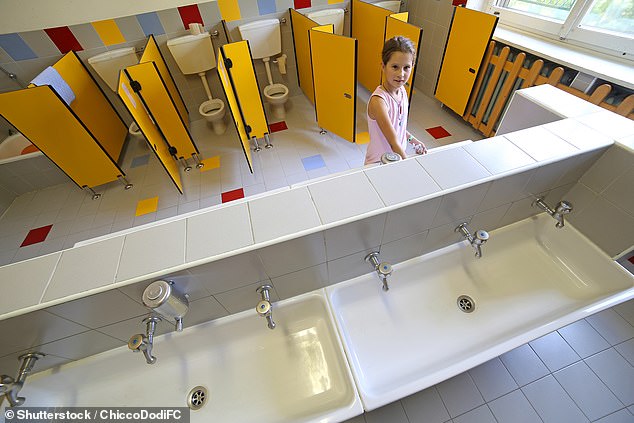 John Flamsteed Community School in Derby said: ‘Students will have specific lavatories that they can use at break and lunchtime – this must be adhered to.’ Pictured: Stock image

A more detailed version has also been produced for parents, to save them having to wade through pages of safety guidance and advice.

One of the changes the 250 pupils will notice when they get back to their classrooms is that they will no longer each have their own plastic cup or bottle for drinking water, because of the risk of infection.

Instead, the school has bought about 1,000 disposable – but recyclable – plastic cups that cannot be left lying around.

Principal Craig Nicholson said: ‘They’re ‘pointed’ cups so they can’t be left anywhere. When a child needs a drink they have to either finish it or pour it down the sink before it goes in the bin. It eliminates any possibility of them spreading infection.’

Pupils at North Ormesby – which is part of the Academies Enterprise Trust chain – will be wearing uniforms again.

The school wants them to be washed each night but Mr Nicholson admitted: ‘It’s just guidance, it’s not something that we’re going to police rigidly every single day.’