Puppy comforts his little sister with a cuddle in Egypt

It’s puppy love: Young dog comforts his poorly little sister with a cuddle during a trip to the vets

This is the heartwarming moment a puppy showed some brotherly love to his ill sister recovering from a deadly virus in Egypt.

The two young dogs had been admitted to a veterinary clinic in Cairo where they had been diagnosed with parvo, a potentially lethal virus infection.

While the male had responded well to the treatment, the female puppy remained under the weather when vets came to check on them.

Footage shows the two dogs lying on a bunk in the clinic, with the brother having placed a comforting paw on his sister as she is receiving medication.

The male puppy is then seen carefully lowering his head on top of his sister’s seemingly trying to show her some love and support.

Dr Mohammad Bu Yahya, who filmed the video in his clinic Africano Centre in the Egyptian capital said the pair had come in to be treated for parvo a few days earlier.

After he captured the adorable moment on his mobile phone, he posted it on social media where it was shared by thousands. 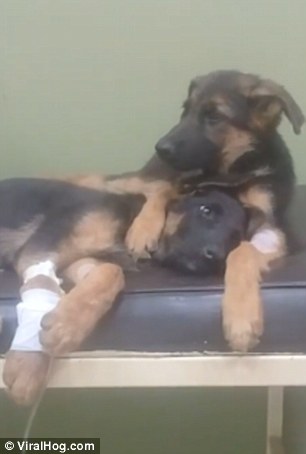 Sibling love: The male puppy is seen comforting his sister who was still recovering from parvo at a veterinary clinic in Cairo 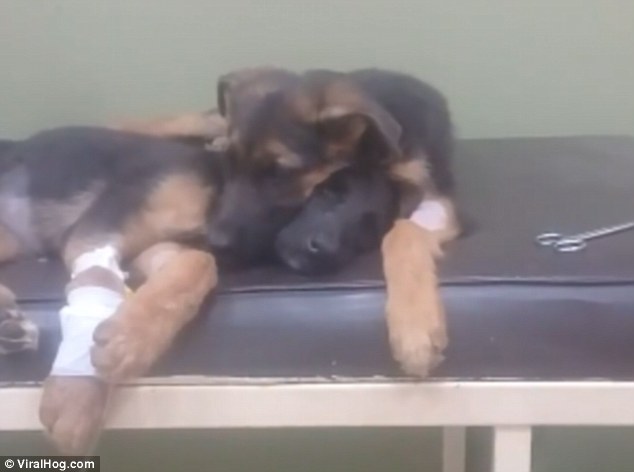 I’m here sis: The loving brother places his head on top of his sister’s in this heartwarming clip

He captioned the video: ‘After four days of intensive treatment, and me spending all the night and day with them, the boy is getting much better but the girl still suffering

‘He shows the love and care for his sister and asking us to help her.’

Dr Bu Yahya said both the puppies later made a full recovery from parvo.

Dogs can contract the illness through faeces from a sick animal, infected soil, or fomites that carry the virus.