Britain’s most dangerous female prisoner Joanna Dennehy threatened to kill Rose West within minutes of arriving in the same jail forcing her into solitary confinement and then another prison, it was revealed today.

Triple murderer Dennehy, 35, and West, 64, who murdered at least ten with husband Fred, are the only two women in British jails serving whole life sentences since the death of Myra Hindley in 2002.

Dennehy killed three men and tried to murder more claiming it was ‘moreish’ and ‘fun’.

Today criminologist Christopher Berry-Dee, who has met both killers, revealed that Dennehy was ‘pure evil’ and she even smelt of it.

And said staff at HMP Bronzefield in Surrey were so worried she would murder West that the 64-year-old was put into solitary confinement within minutes and then moved to another prison the next morning. 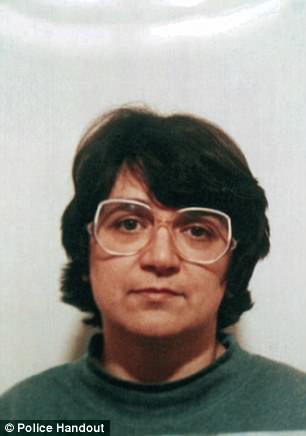 He said: ‘Joanna Dennehy tried from the get-go to assert herself as top dog. 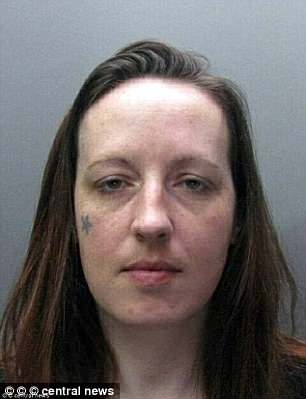 Dennehy was so evil she even stank of it, a criminologist who has met her said today

‘Between five and 20 minutes after first arriving at Bronzefield in 2014, she said she was going to kill Rose West.

‘Dennehy quickly established herself as the shot-caller. She has guards and inmates at her beck and call.’

Former marine Berry-Dee has written a new book called Talking with Female Serial Killers after meeting them all over the world.

He told the Mirror: ‘Dennehy was, without doubt, the most evil person I have ever met’, and is ‘streets ahead’ of Aileen Wuornos, who murdered seven men in Florida between 1989 and 1990 by shooting them at point-blank range.

‘Well-spoken’ serial killer Dennehy has put on a lot of weight in jail, he said.

She appeared to threaten him by getting her face as close to his as possible and staring at him without blinking.

He added: ‘I could smell evil coming off her – it’s a smell like no other so it’s impossible to describe but it’s acrid and dirty’. 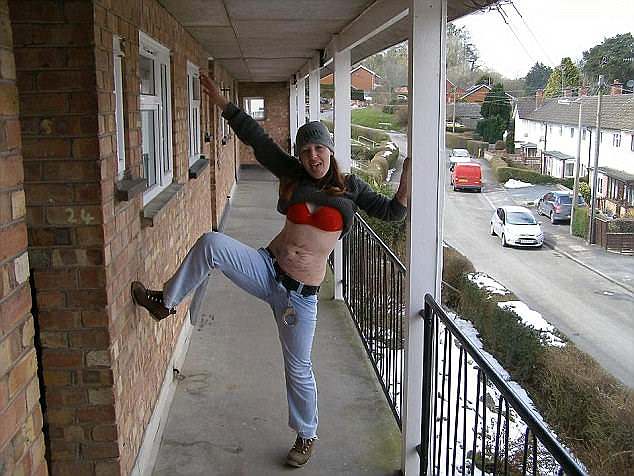 She has showed ‘no remorse’ for murdering three men in the space of ten days.

During his summing-up, Dennehy muttered in the dock and shouted the word ‘b******s’.

But after the judge ordered her to serve the rest of her life in jail, the mother of two, who was flanked by ten security guards, looked stunned and started wailing.

Dennehy is only the third woman to be given a whole-life prison term – along with Moors murderer Myra Hindley and House of Horrors serial killer Rose West – and the first to be given the term by a judge.

Hindley and West were both handed the sentence by home secretaries.

In March 2013, she stabbed to death three men in ten days in Peterborough before travelling to Hereford, where she knifed two more within minutes of each other.

Her first victim was a Polish man, Lukasz Slaboszewski, 31, who had come to believe Dennehy was his girlfriend.

She lured him to a property with suggestive texts, then stabbed him through the heart.

Dennehy then used a pocket knife to kill her housemate John Chapman, 56, stabbing him once in the neck.

The third victim was her landlord, Kevin Lee, 48, who she lured with the promise of sexual favours.

Excited by the police manhunt for her, she then stabbed Robin Bereza from behind in Hereford on April 2. 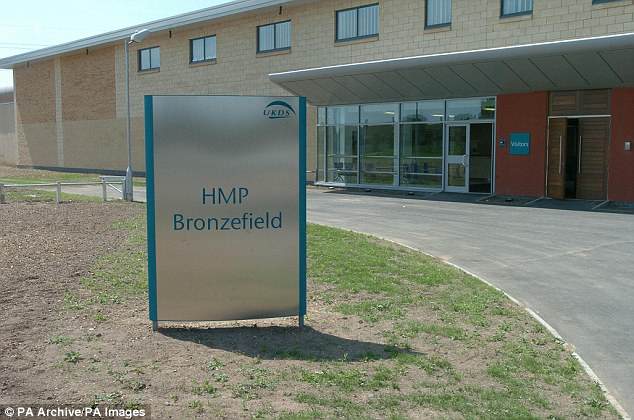 Staff at HMP Bronzefield in Surrey were so worried Dennehy would murder West that the 64-year-old was put into solitary confinement within minutes and then moved to another prison the next morning.

She was caught after two days on the run.

Dennehy, who was brought up in a stable family home in the Home Counties, carried out the attacks to gratify her ‘sadistic love for blood’.

The Old Bailey was told the killer had a ‘sexual and sadistic motivation’.

Later she told a psychiatrist: ‘I killed to see how I would feel, to see if I was as cold as I thought I was. Then it got more -ish.’

Experts said Dennehy craved notoriety and wanted to humiliate her victims through sick sex games. Before the killings she had boasted she had already killed four times.

When the three bodies were found, police launched a high-profile murder investigation.

Meanwhile Dennehy, 31, travelled to Hereford and started scouring the streets with accomplice Gary Stretch for more men to kill.

During her search for further victims, Dennehy posed for photos with a huge serrated knife and bragged that she and Stretch were ‘like Bonnie and Clyde’, whose gang killed nine policemen in 1930s America.

She has tattoos on her arms, including one which said ‘licking legend’. 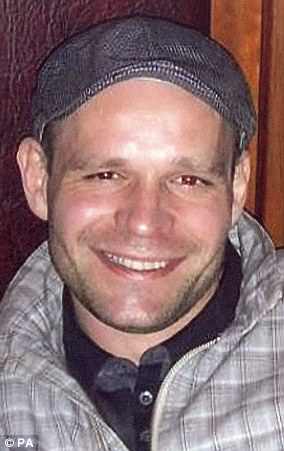 The 31-year-old moved to the UK from Nowa Sol, Poland, in 2005 to work in a DHL warehouse in Peterborough.

Cambridge Crown Court heard that, at the time of his death, he was being prescribed methadone as a substitute for his heroin addiction.

He was last seen alive leaving his home in the city’s Lincoln Road on March 19 last year having met Joanna Dennehy for the first time the previous day. He told friends he had found an ‘English girlfriend’.

It is thought he was stabbed to death in a property in Rolleston Garth on or soon after this date.

Afterwards, Dennehy stored his body in a wheelie bin for several days before dumping it in a ditch at Thorney Dyke along with that of John Chapman. Their bodies were discovered by a farmer on April 3.

In a statement issued after his death by Mr Slaboszewski’s sister, Magda Skrzypczak, said: ‘Lukasz was the joker in the family, always finding something to laugh about. His mum and dad are devastated by their loss and he also leaves two grieving sisters. 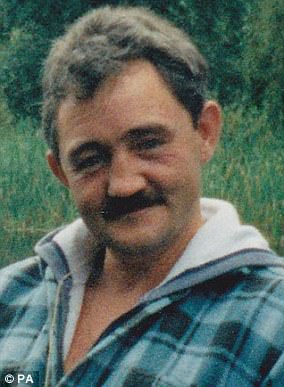 The 56-year-old, originally from Leeds, had served with the Navy in the Falkland’s war.

Jurors heard he had fallen on hard times. He was an alcoholic but known as a ‘friendly drunk’, the court heard. Mr Chapman lived in the same set of bedsits as Dennehy in Bifield, Orton Goldhay.

He described Dennehy, who had been employed as an ‘enforcer’ by landlord Kevin Lee, as the ‘man woman’ and friends were concerned for his safety as she attempted to force him to move out, the court heard.

He was killed in his bedsit on March 29 after Dennehy stabbed him in the heart. A photograph of his body, timed at 7.32am that day, was found on Leslie Layton’s phone.

Mr Chapman’s body was found alongside that of Mr Slaboszewski on April 3. At the time, his family released a statement saying: ‘We are all so upset and shocked by the tragic loss of John.

‘He was a loving brother, brother in law and uncle. He was much loved by all who knew him and will be missed by all his friends and family.’ 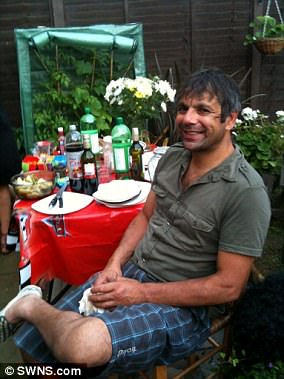 Kevin Lee was having an affair with Dennehy

The 48-year-old lived in Fletton, Peterborough, with his wife Christina and their two children.

He ran the Quick Let property firm, which specialised in providing bedsits to people of ‘limited resources’, prosecutors said.

Business partner Paul Creed told the court Dennehy had approached them seeking accommodation. Mr Creed had been reluctant to house her but Mr Lee wanted to ‘give her a chance’.

Mr Lee later employed Dennehy as a decorator and enforcer, the court heard. On March 20, Mr Lee confessed to his wife that he was having an affair with Dennehy.

Nine days later, on Good Friday, he gave Dennehy an Easter card. Later that day she called him on the phone and arranged to meet him at Rolleston Garth – where Mr Slaboszewski had been killed – before stabbing him to death.

Mr Lee’s body was found by a dog walker in a ditch beside Middle Road, Newborough, on March 30. His family issued a statement saying: ‘We are devastated by Kevin’s death, he was a wonderful husband, father, loving brother and son.

‘His naturally infectious personality touched everyone who knew him. He will be hugely missed by all his friends and family.’