Salman, who is facing international condemnation for the killing of journalist Jamal Kashoggi, had been left standing alone as world leaders filed past him and into a meeting room – before the Russian President arrived to sit next to him.

Putin held up his hand to Salman which the Middle Eastern leader enthusiastically grasped before the two men sat down side-by-side with broad smiles on their faces. 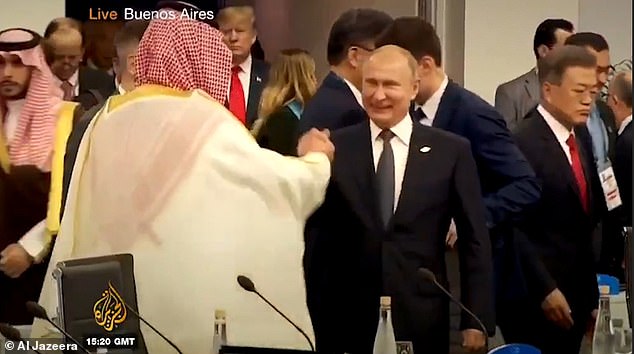 Salman had been left standing alone as other world leaders filed into the meeting, until Putin came to sit next to him and the leaders shared a very warm greeting

It comes after Salman – who had been courting western leaders with promises of human rights reforms in Saudi Arabia – was given a hard time by the likes of French President Emmanuel Macron over Kashoggi’s death in Istanbul.

During a five-minute exchange on the sidelines of the summit, Macron insisted that international experts form part of the team investigating Khashoggi’s killing.

He also conveyed ‘very firm’ messages to the Prince over the Saudi-led war against Houthi rebels in Yemen, which has left half of the country’s population at risk of famine, including 8million pregnant women and children.

Theresa May, the UK Prime Minister, also vowed to confront Salman over Khashoggi and Yemen, saying she will not avoid speaking with him at the summit.

‘In relation to Mr Khashoggi, we want to see a full and transparent investigation of what happened and those responsible being held to account,’ she said. 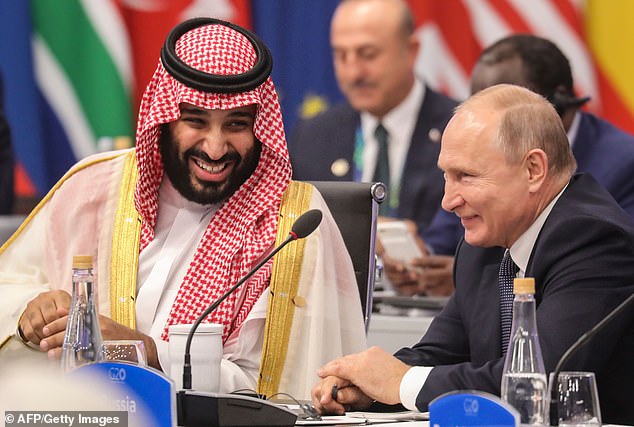 The de-facto Saudi leader and Russian President could be seen smiling broadly as they sat down together, in defiance of western leaders who have sought to ostracize them 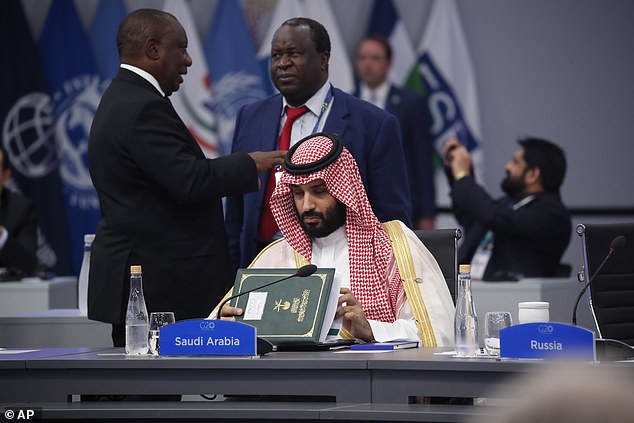 Salman had cut a lonely figure at the summit until the arrival of Putin, as western leaders he tried to court with promises of human rights reforms admonished him over Khashoggi

Earlier, Putin used a speech to the summit to denounce Western nations’ ‘vicious’ use of sanctions against Russia over Ukraine, election interference and the poisoning of Sergei Skripal in England.

The speech was also a veiled swipe at President Donald Trump, who advocates an ‘America First’ policy on trade, and who cancelled a G20 meeting with Putin yesterday, in protest at Russia’s naval skirmish with Ukraine last weekend. 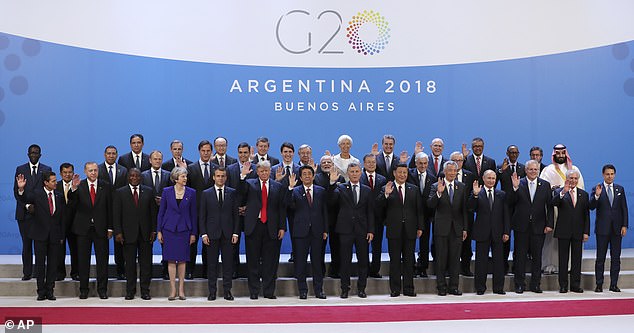 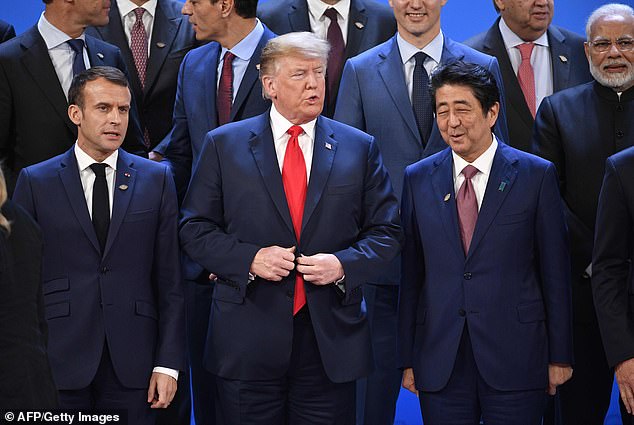 French President Emmanuel Macron, US President Donald Trump and Japanese Prime Minister Shinzo Abe talk among themselves as they group photo is taken

The Russian rouble, which is sensitive to events that might lead to new sanctions being imposed on Russia, fell on news of the cancelled meeting between Trump and Putin.

Ukraine and Russia have blamed each other for last Sunday’s clash at the Kerch Strait through which ships have to pass to reach Ukrainian ports at Berdyansk and Mariupol.

The incident has prompted renewed calls for more Western sanctions on Russia.

Highlighting the deep rifts within the G20, European Council President Donald Tusk said the European Union would extend its economic sanctions on Moscow next month.

‘Europe is united in its support to Ukraine’s sovereignty and territorial integrity. This is why I am sure that the EU will roll over the sanctions against Russia in December,’ Tusk told a news conference in Argentina.

UK Prime Minister Theresa May on Thursday said London would push for ‘appropriate sanctions’ and called on Russia to release the Ukrainian vessels and crew.

The United States and the EU have imposed sanctions on Russia since 2014, when Moscow annexed Crimea after a pro-Russian leader was toppled in Kiev.

Fighting between Ukraine and Moscow-backed separatists has killed more than 10,000 people. Major fighting ended with a 2015 ceasefire but deadly exchanges of fire are still frequent. 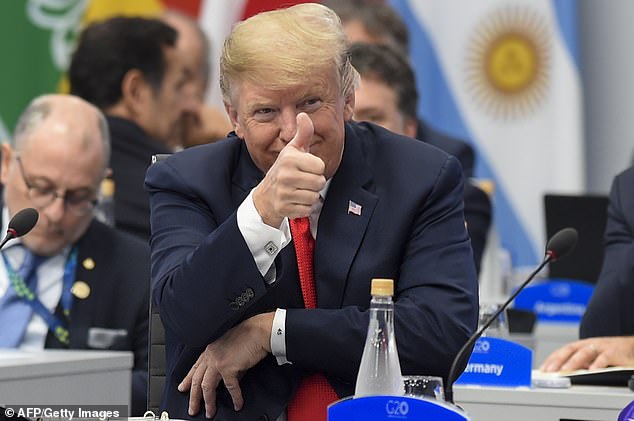 Donald Trump had been due 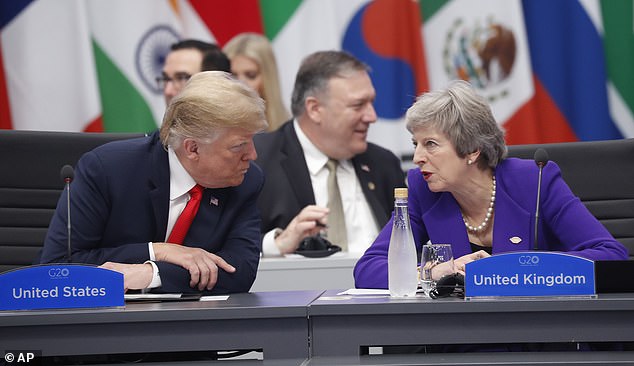