German investigators believe Russian opposition leader Alexei Navalny was poisoned with a new, slow-acting form of novichok, according to a report.

Navalny, 44, was roused from an induced coma in Berlin this week after falling ill on a flight from Tomsk to Moscow on August 20. He has been able to talk but it is unclear whether he will suffer from long-term nerve damage.

Germany’s chemical weapons laboratory in Munich is certain that it found novichok in samples of Navalny’s blood, urine, skin and a bottle he was drinking from.

But the compound is a deadlier, slow-acting form of the nerve agent that was used against Sergei Skripal and his daughter in the Salisbury attack in 2018, German paper Die Zeit reported.

Russian opposition leader Alexei Navalny at a rally to mark the 5th anniversary of opposition politician Boris Nemtsov’s murder and to protest against proposed amendments to the country’s constitution, in Moscow, Russia February 29, 2020 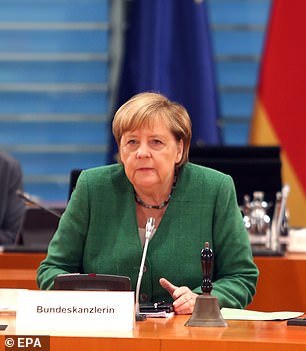 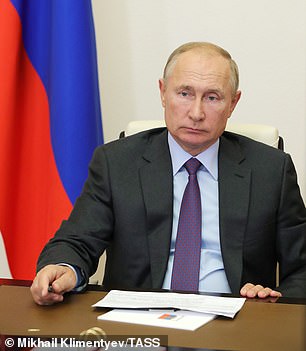 German Chancellor Angela Merkel has said that Russia has ‘very serious questions to answer,’ while Vladimir Putin’s office has poured scorn on the allegations

The new structure of the nerve agent, originally formulated by Soviet chemists in the 1970s, is believed to have been previously unknown to Western agencies.

What is Novichok and how does it kill?

The Novichok family of nerve agents were secretly developed over two decades at a research facility 50 miles outside the Russian capital.

Sometimes described as ‘gases’ they are in fact liquid, intended to be delivered as a fine spray.

A series of poisons, known as Novichok 5, 7, 8 and 9 to identify them, were produced amid conditions of complete secrecy.

They all kill the same way. By inhibiting enzymes that control nerve receptors in the brain.

One expert said victims simply ‘forget to breathe’. A tiny drop, almost undetectable, placed on the skin or inhaled can cause death within minutes.

The German government has given evidence to the Bundestag intelligence committee that toxicology results point to a Russian state agency such as the FSB, MPs have revealed.

It is believed that an agent tailing Navalny slipped the poison into his drink at the airport and that he would fall severely ill on his plane with no chance of survival at 30,000ft.

German Chancellor Angela Merkel said last week: ‘There are very serious questions now that only the Russian government can answer, and must answer.’

Putin’s spokesman Dmitry Peskov said that allegations of Kremlin involvement ‘absolutely cannot be true and are rather an empty noise’.

After Navalny fell ill, the aircraft made an emergency landing in Omsk and he was rushed to hospital in the Siberian city.

The following weekend he was airlifted to Berlin, where doctors at the Charite treated him with the antidote atropine and kept him in a medically induced coma.

The hospital said in an initial statement last week that clinical tests ‘indicate poisoning with a substance from the group of cholinesterase inhibitors’, which are used in medicines and insecticides but also in nerve agents.

News of his gradual recovery came as Merkel indicated that she might be willing to rethink the fate of a controversial German-Russian gas pipeline project – a sign of Berlin’s growing frustration over Moscow’s stonewalling about the case.

German foreign minister Heiko Maas said on Sunday that the Russian reaction could determine whether Germany changes its long-standing backing for the Nord Stream 2 pipeline, which brings Russian gas to Germany under the Baltic Sea, bypassing Ukraine. 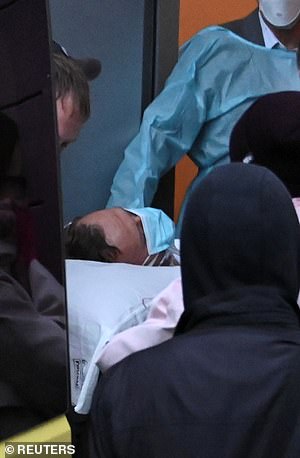 ‘The chancellor also believes that it’s wrong to rule anything out,’ Merkel spokesman Steffen Seibert told reporters on Monday after being asked about Mr Maas’s comments.

Previously, Mrs Merkel had insisted on ‘decoupling’ the Navalny case from the pipeline project, which the US strongly opposes.

In August, three US Republican senators threatened sanctions against the operator of a Baltic Sea port located in Mrs Merkel’s parliamentary constituency for its role as a staging post for ships involved in building Nord Stream 2.

Mr Seibert cautioned that it was premature to expect Moscow to respond to the matter within a few days, but made it clear that Berlin wants answers soon.

‘I can’t express a clear, time-limited expectation, except that we are certainly not talking about months or the end of the year,’ he said.

German diplomats rejected the Russian suggestion that Berlin was to blame for any delay in investigating the case, noting that Mr Navalny was first treated for suspected poisoning in the Siberian city of Omsk on August 20.

‘All evidence, witnesses, traces and so forth are in the place where the crime was committed, presumably somewhere in Siberia,’ said German Foreign Ministry spokesman Christofer Burger.

The co-leader of Germany’s opposition Green party, Robert Habeck, called on the government to take a stronger stance and ‘bury’ the pipeline project. 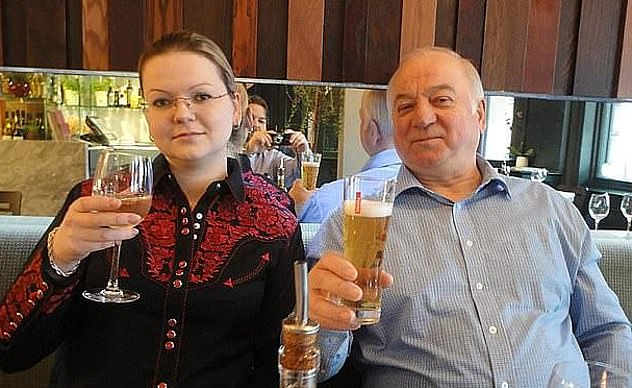 Russian double agent Sergei Skripal (right) and his daughter Yulia were taken ill in Salisbury in March 2018, causing a political storm when their identities were revealed

The project ‘divides Europe, it is economically nonsensical and oversized, and it is wrong in security policy terms’, Mr Habeck said.

Completing it ‘would mean that Russia can do what it wants. This signal must not be sent’.

Mikhail Ulyanov, the Russian envoy to international organisations in Vienna, voiced suspicions about the timing of demands to link the pipeline with the Navalny case.

‘Suspicious coincidence of Navalny case and the final stage of Nord Stream 2 construction, which some states desperately want to be closed. I am not fond of conspiracy theories but it is obvious that the tragic events with Navalny are very timely and helpful for opponents of NS2,’ he tweeted.