In those camps, built to house the ‘ideological enemies of socialism’, more than one million people died from 1934 to 1953.

And not content with eliminating political opposition, the Russian President has also begun a systematic campaign to rewrite history.

Joseph Stalin, according to this new script, was an ‘effective manager’ who made the Soviet Union great.

And without forced labour there would have been no Kremlin nuclear or space programme.

To reinforce this myth Putin has set about transforming former gulags into museums.

Between 1929 and the year of Stalin’s death in 1953, 18 million men and women were transported to Soviet slave labour camps in Siberia and other outposts of the Red empire. Prisoners worked in the most extreme climates, facing temperatures of -20C (-4F), as they cut down trees with hand saws and dug at frozen ground with primitive pickaxes.

Others mined coal or copper by hand, often suffering painful or fatal lung diseases from inhaling ore dust while on the job.

Labourers in the prisons worked up to 14 hours a day on massive projects, including the Moscow-Volga Canal, the White Sea-Baltic Canal, and the Kolyma Highway.

Perm-36 is one of the first to be revamped, and remodelled, after local government seized control of the the site three years ago.

Resurrecting Stalin ‘is a way of justifying the personal power of Putin’ and Russia’s lack of civil liberties and human rights, said 41-year-old opposition leader Alexei Navalny to The Times.

‘Putin does not want certain parallels to be made between himself and Stalin, of course, but the people around him give some hints saying, for instance, that Stalin was a strong leader and that Putin is a strong leader.’ 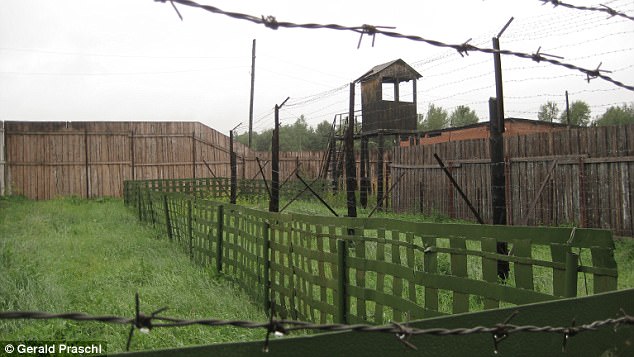 The gulag is now a museum hailing the camp as a positive, and necessary, force in Russia

This differs from the narrative Navalny was taught at school: that Stalin was a mass executioner of Russians.

Now, however, Navalny himself is routinely denounced in Stalinist terms as a ‘foreign agent’ and ‘enemy of the people’.

Perm-36 has been remodeled as a monument to the crimes committed inside the former slave camp.

The first exhibit to greet visitors is a photograph of men sitting on a log fishing. In another scene a cheerful inmate is seen felling trees, as if at some kind of summer camp.

According the the captions these men were ‘toiling for the motherland’. 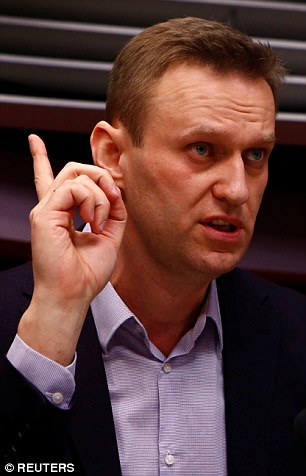 On one wall is a poster of the dictator, pulling on a pipe at his desk. It is captioned ‘Stalin in the Kremlin taking care of each of us’.

Prisoners, the museum says, enjoyed film nights and ‘shows’ in a ‘house of culture’ fitted with green velvet chairs.

They were allowed reading material, including foreign authors, visitors are told. In a newly fitted library, Charles Dickens sits next to Lenin.

But the resurgence of Stalin as a popular figure extends beyond the restoration of gulags.

Just three weeks ago thousands of Stalinists visited the leader’s tomb at the Kremlin to mark the 65 anniversary of his death.

And his bust is reportedly appearing on bureaucrat’s desks.

Many see Stalin’s rehabilitation as part of Putin’s strategy of exploiting nationalism to strengthen his grip after 18 years in power.