President Vladimir Putin has denounced Western nations’ ‘vicious’ use of sanctions against Russia during a speech at the G20 summit in Argentina.

The speech was also a veiled swipe at President Donald Trump, who advocates an ‘America First’ policy on trade, and who cancelled a G20 meeting with Putin yesterday, in protest at Russia’s naval skirmish with Ukraine last weekend.

Other world leaders, including Prime Minister Theresa May, want to impose further sanctions against Moscow after the incident, which saw Russia capture three Ukrainian navy vessels and their crews off the coast of Crimea.

Not pleased: Vladimir Putin’s speech was a veiled swipe at Trump, who has advocated an ‘America First’ policy on trade, and other Western nations’ sanctions against Russia

The Russian rouble, which is sensitive to events that might lead to new sanctions being imposed on Russia, fell on news of the cancelled meeting between Trump and Putin.

Ukraine and Russia have blamed each other for last Sunday’s clash at the Kerch Strait through which ships have to pass to reach Ukrainian ports at Berdyansk and Mariupol. 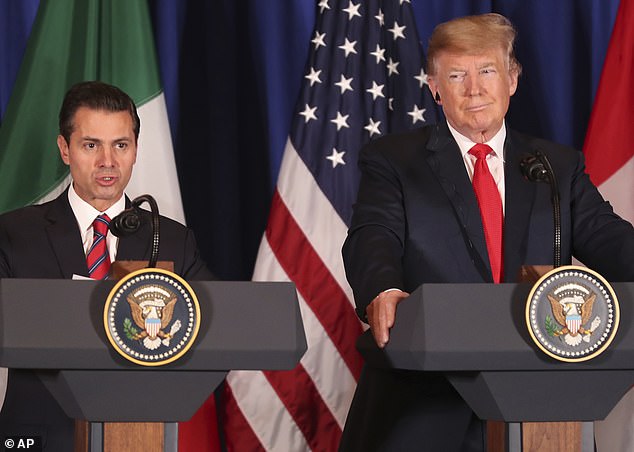 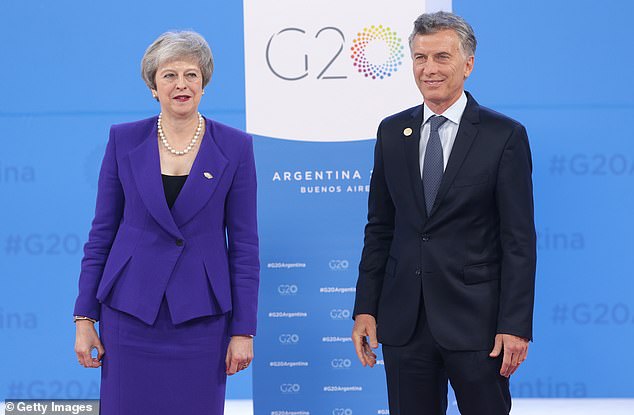 Prime Minister Theresa May, pictured with the President of Argentina Mauricio Macri today, said she would push for ‘appropriate sanctions’ against Russia in the wake of the the incident, which saw Russia capture three Ukrainian navy vessels and their crews off the coast of Crimea

The incident has prompted renewed calls for more Western sanctions on Russia.

Highlighting the deep rifts within the G20, European Council President Donald Tusk said the European Union would extend its economic sanctions on Moscow next month.

‘Europe is united in its support to Ukraine’s sovereignty and territorial integrity. This is why I am sure that the EU will roll over the sanctions against Russia in December,’ Tusk told a news conference in Argentina.

UK Prime Minister Theresa May on Thursday said London would push for ‘appropriate sanctions’ and called on Russia to release the Ukrainian vessels and crew.

The United States and the EU have imposed sanctions on Russia since 2014, when Moscow annexed Crimea after a pro-Russian leader was toppled in Kiev.

Fighting between Ukraine and Moscow-backed separatists has killed more than 10,000 people. Major fighting ended with a 2015 ceasefire but deadly exchanges of fire are still frequent.