Nuclear missiles have rolled through Red Square in a chilling warning to the West as dictator Vladimir Putin prepares for his annual Victory Day parade – while desperately seeking a victory in his bloody assault on Ukraine.

The thermonuclear RS-24 Yars ballistic missile – which experts believe can can carry up to 10 warheads – was seen taking pride and joy as it was driven past rows of armed guards on a 16-wheeler vehicle on Saturday.

The intercontinental weapon, which weighs 49.6 tonnes, can travel up to 24,500km/hr and is capable of hitting targets up to 12,000km away – meaning it could strike London or New York within minutes.

The weapon of mass destruction was followed closely by several Iskander-M missile launchers during a rehearsal for the military parade, set to take place on Monday.

Jubilant soldiers and servicewomen were seen marching outside the Kremlin today in preparation for the huge celebration, which marks Russia’s victory over Nazi Germany in World War Two.

Brandishing guns, they waved Russian flags, performed salutes and smiled at the cameras.

Meanwhile, just 1,200km away, Ukrainian soldiers are preparing to make their last stand against Putin’s warring forces in the strategic port city of Mariupol – where hundreds of civilians are cowering for their lives in tunnels underneath a steel mill as they attempt a last-ditch evacuation.

The RS-24 Yars ballistic missile – which experts believe can can carry up to 10 warheads – was seen taking pride and joy as it was driven past rows of armed guards on a green 16-wheeler vehicle on Saturday. 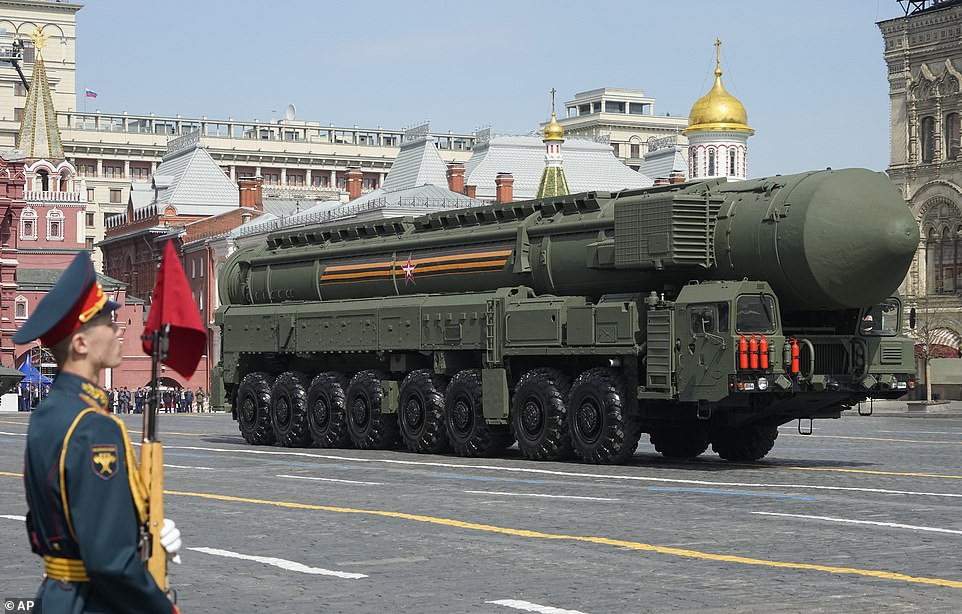 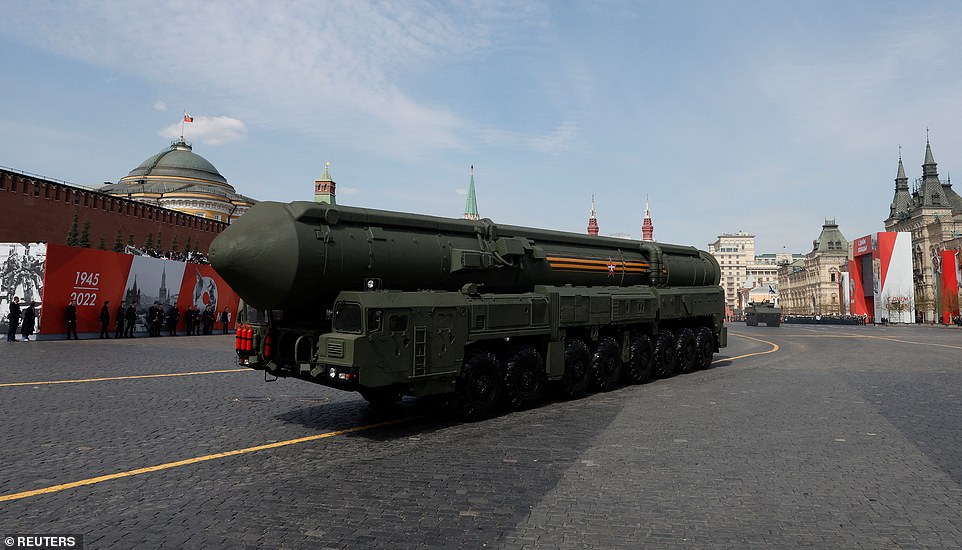 The intercontinental weapon, which weighs 49.6 tonnes, can travel up to 24,500km/hr and is capable of hitting targets up to 12,000km away – meaning it could strike London or New York within minutes 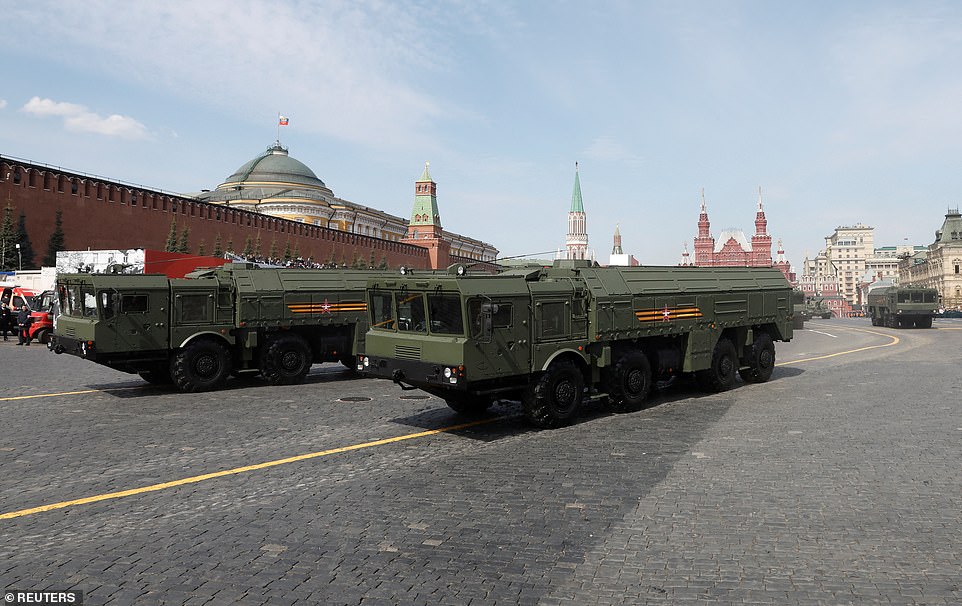 Russian Iskander-M missile launchers drive in Red Square during a rehearsal for a military parade marking the anniversary of the victory over Nazi Germany in World War Two in central Moscow, Russia May 7, 2022 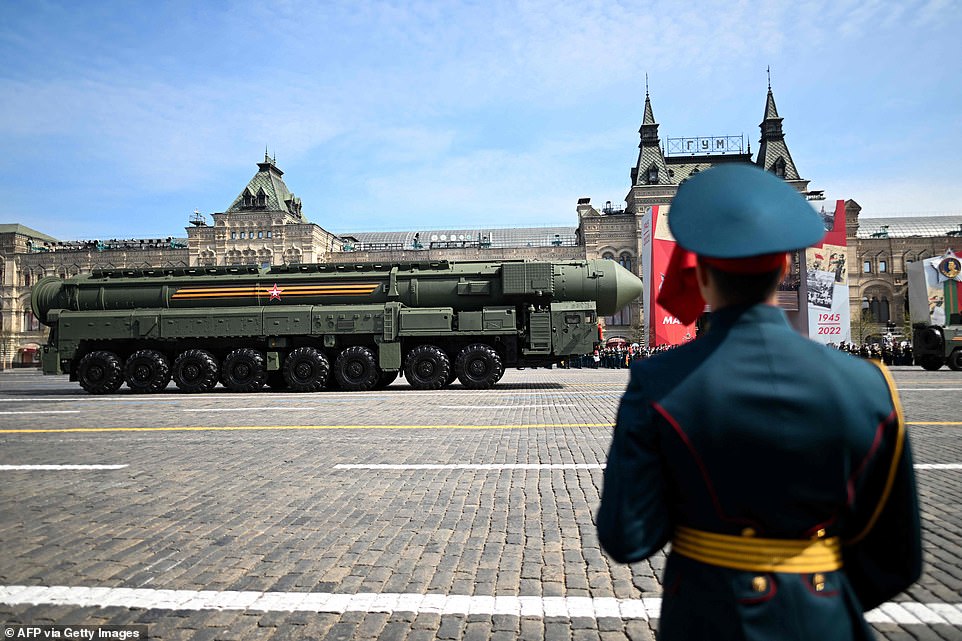 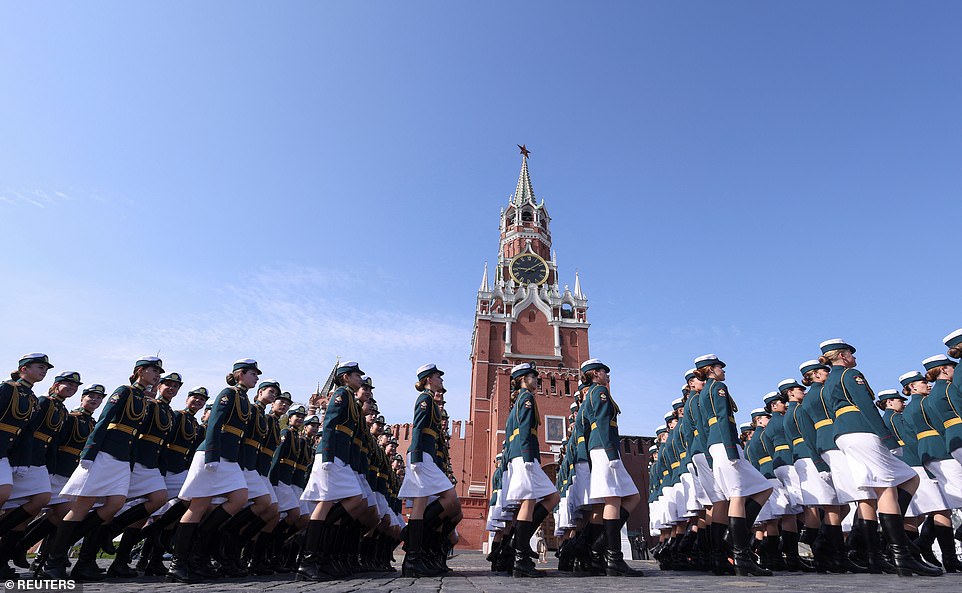 Russian service members march before a rehearsal for a military parade marking the anniversary of the victory over Nazi Germany in World War Two in Red Square in central Moscow, Russia May 7, 2022. 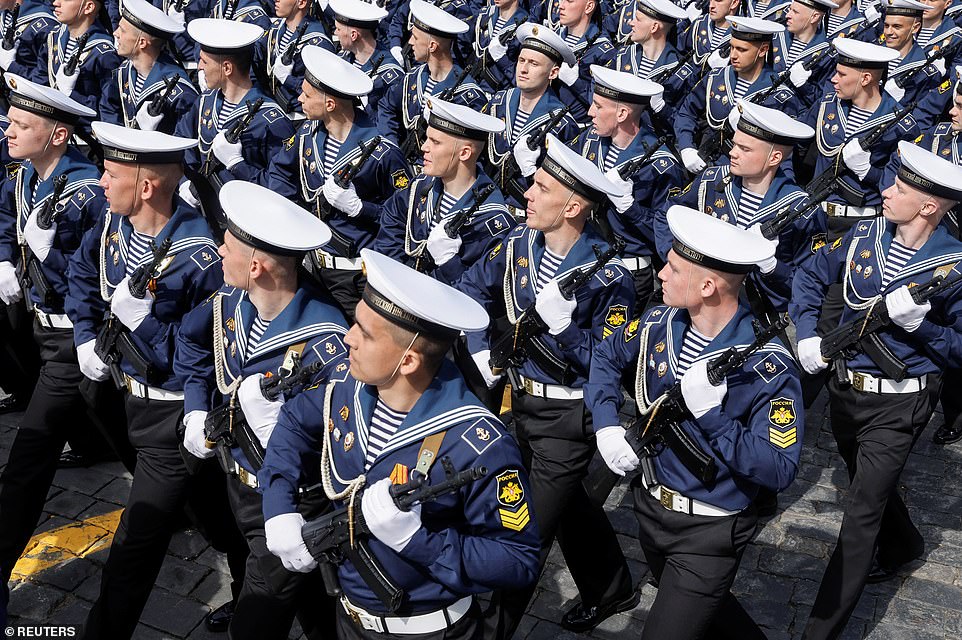 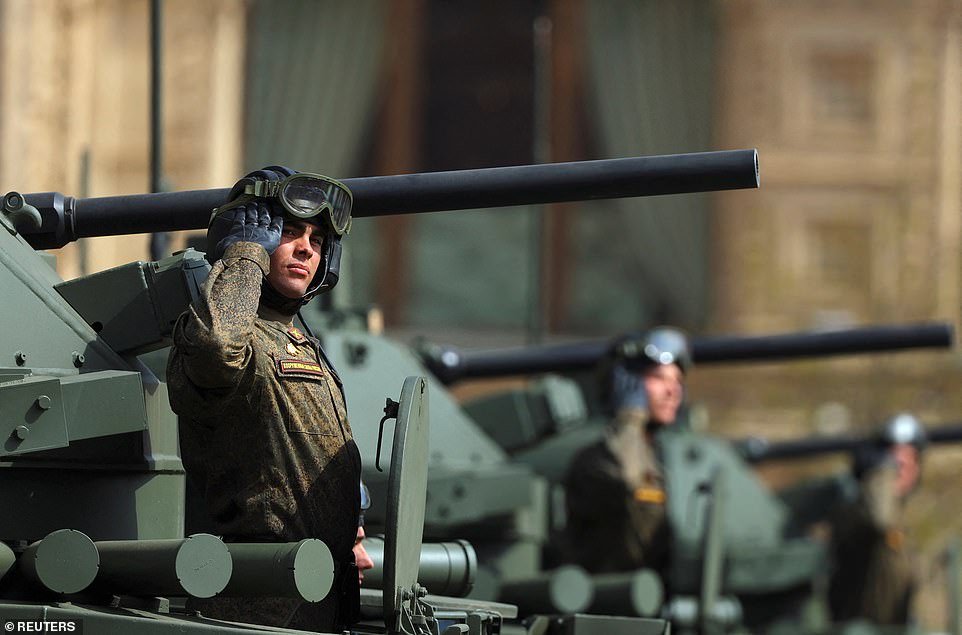 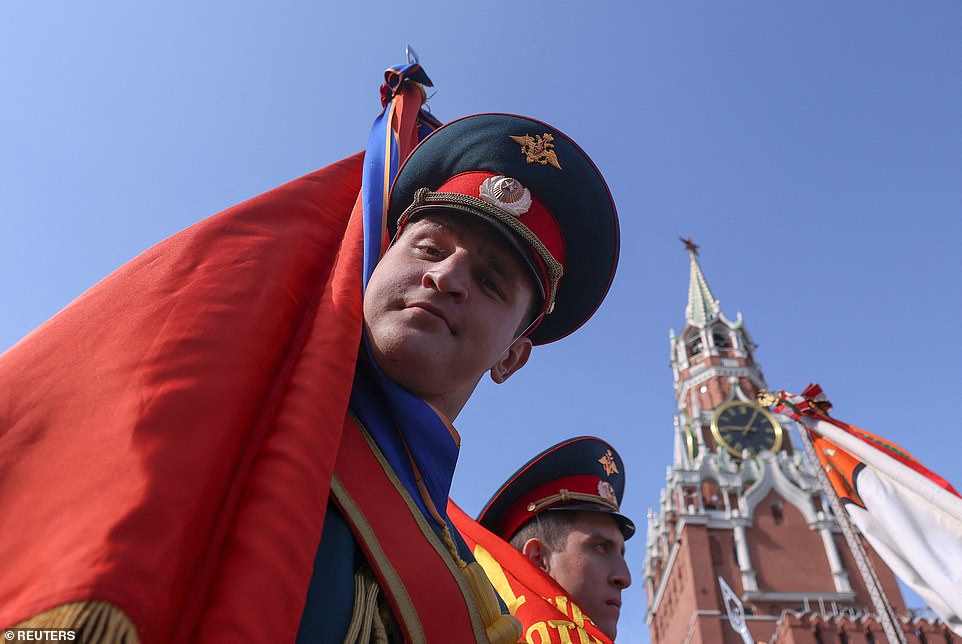 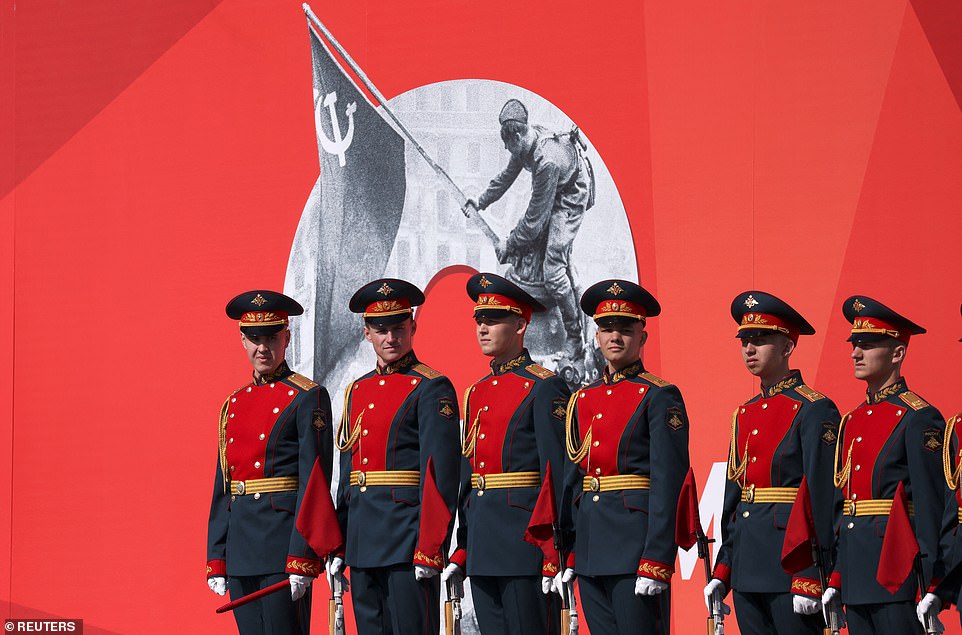 Dozens of people were evacuated on Friday from the Azovstal plant and handed over to representatives of the United Nations and the International Committee of the Red Cross, Russian and Ukrainian officials said.

The Russian military said the group of 50 included 11 children.

The latest evacuees followed roughly 500 other civilians who got out of the plant and city in recent days.

The fight for the last Ukrainian stronghold in a city reduced to ruins by the Russian onslaught appears increasingly desperate.

There is growing speculation that President Vladimir Putin wants to finish the battle for Mariupol so he can present a triumph to the Russian people in time for Monday’s Victory Day, the biggest patriotic holiday on the Russian calendar.

As the holiday commemorating the Soviet Union’s victory over Nazi Germany in the Second World War approaches, cities across Ukraine are preparing for an expected increase in Russian attacks, with officials urging residents to heed air raid warnings. 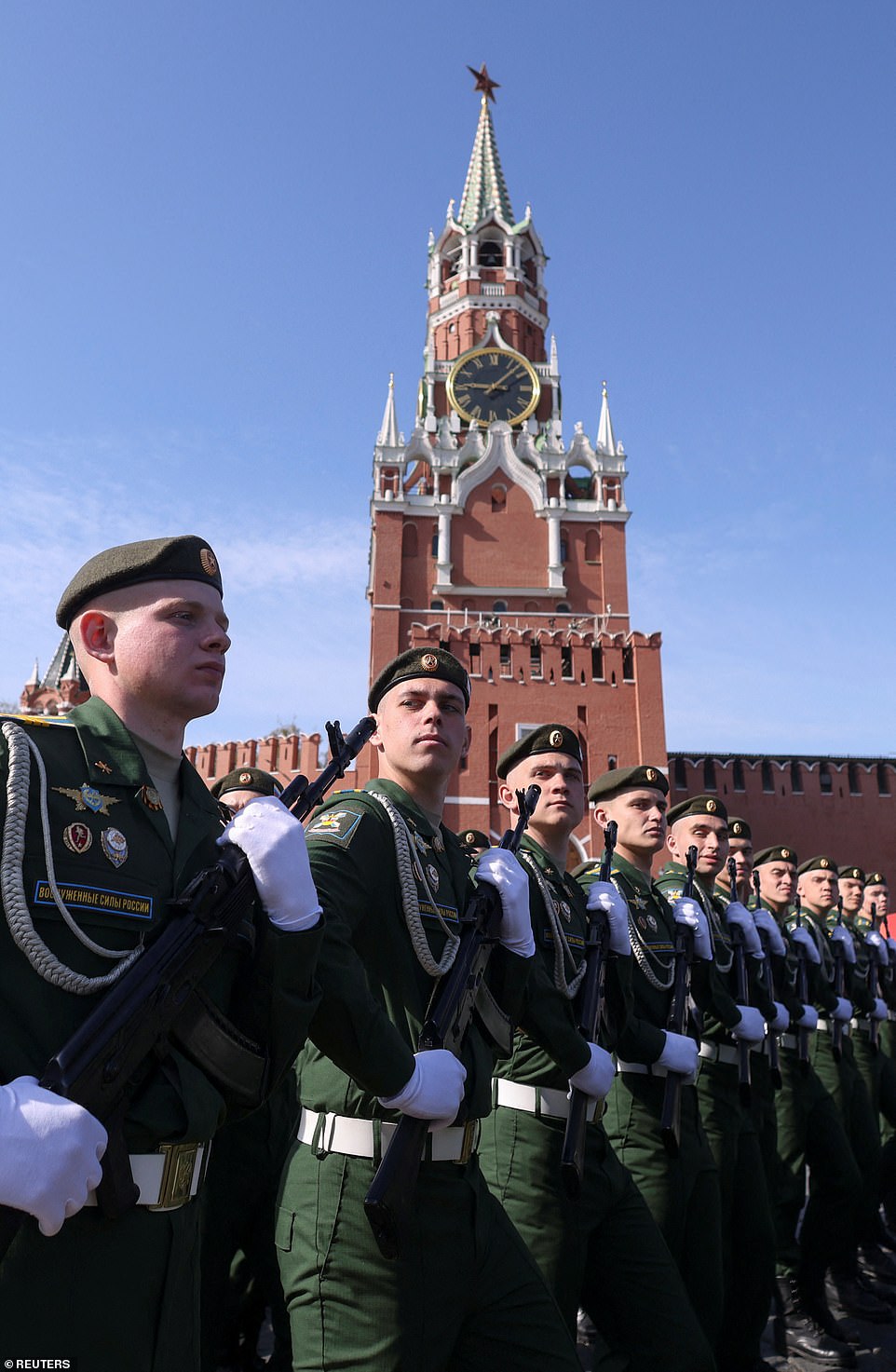 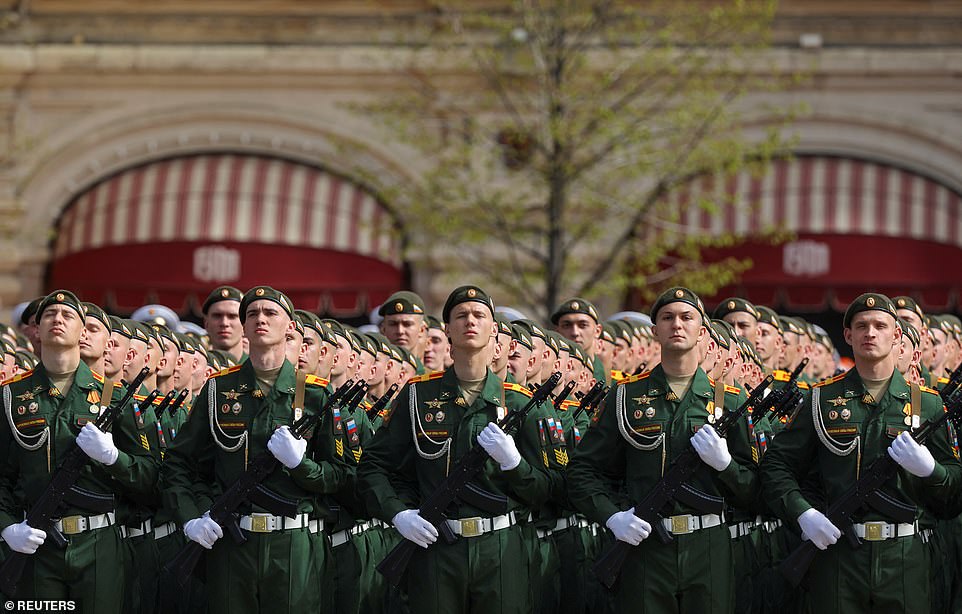 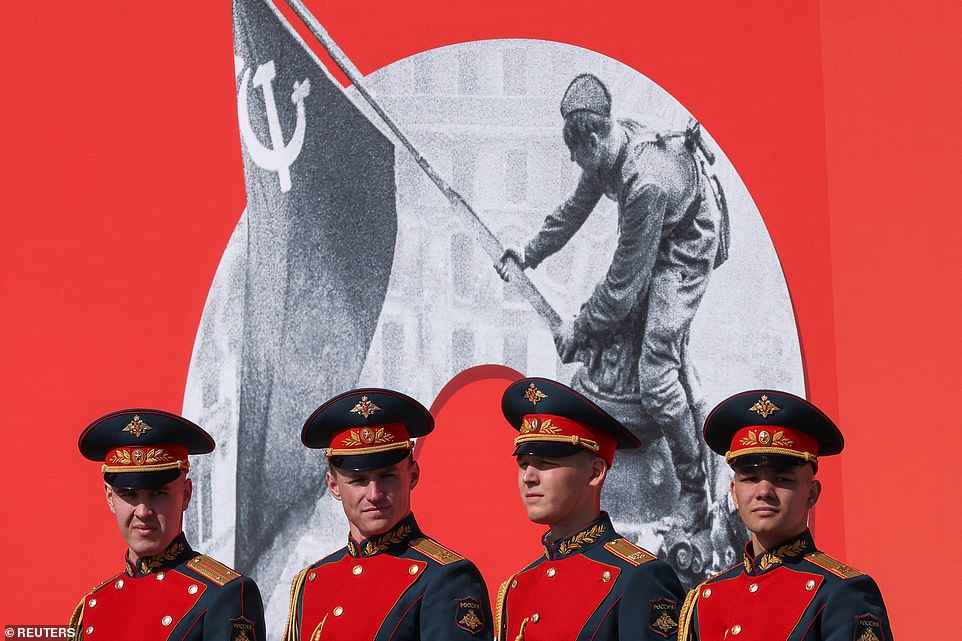 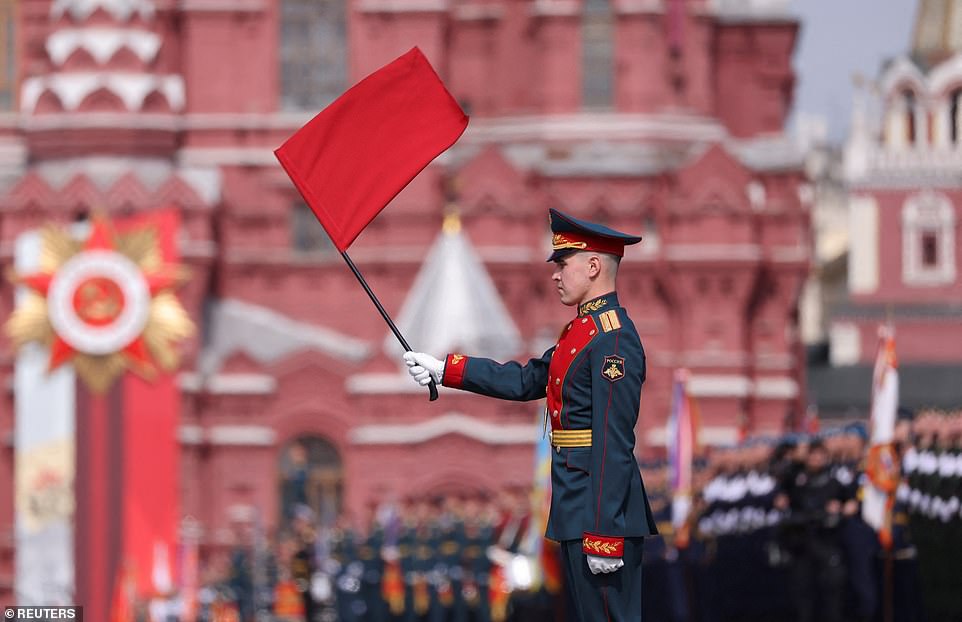 A Russian serviceman waves a red flag during a rehearsal of the Victory Day parade in Red Square, Moscow 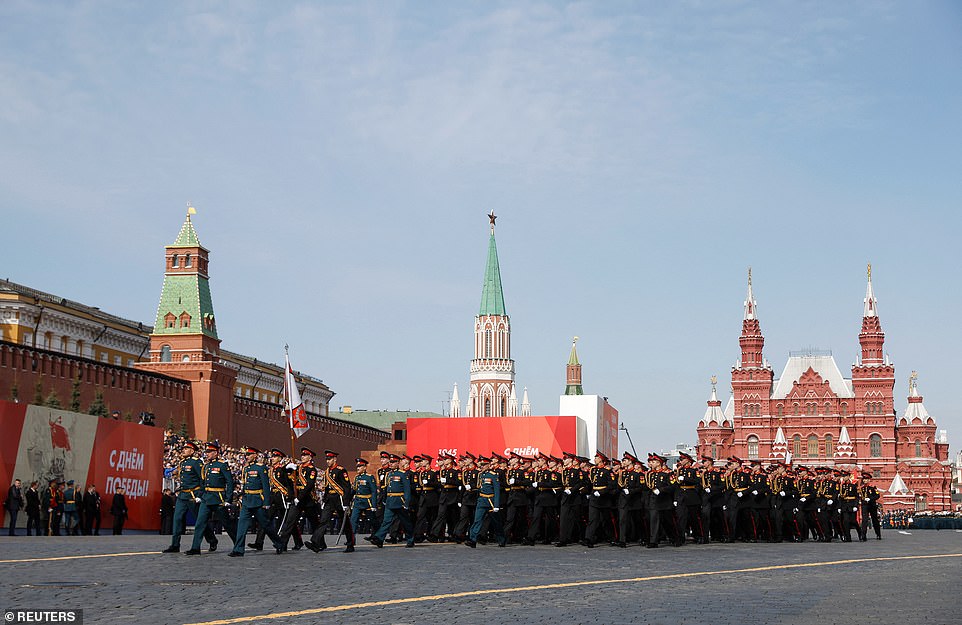 Soldiers are led on a march during a rehearsal of the Victory Day parade, set to take place on Monday in Moscow

‘These symbolic dates are to the Russian aggressor like red to a bull,’ said Ukraine’s first deputy interior minister, Yevhen Yenin.

‘While the entire civilised world remembers the victims of terrible wars on these days, the Russian Federation wants parades and is preparing to dance over bones in Mariupol.’

Ukrainian President Volodymyr Zelensky also reminded people not to go into forests that were recently under Russian occupation because many land mines and trip wires remain in place.

On Saturday, a Russian missile destroyed a Ukrainian national museum dedicated to the life and work of an 18th-century philosopher, the local council said. It posted photographs on Facebook showing the Gregory Skovoroda museum engulfed in flames.

As an indication of his importance to Ukraine’s cultural heritage, Skovoroda’s likeness adorns a Ukrainian banknote.

The museum in Skovorodynivka lies near the Russian border in the Kharkiv region where fighting has been fierce.

By Russia’s most recent estimate, roughly 2,000 Ukrainian fighters are holed up in the vast maze of tunnels and bunkers under the Azovstal steelworks. They have repeatedly refused to surrender.

Ukrainian officials said before Friday’s evacuations that a few hundred civilians were also trapped there, and fears for their safety have increased as the battle has grown fiercer in recent days.

Kateryna Prokopenko, whose husband, Denys Prokopenko, commands the Azov Regiment troops inside the plant, issued a desperate plea to also spare the fighters.

She said they would be willing to go to a third country to wait out the war but would never surrender to Russia because that would mean ‘filtration camps, prison, torture and death’.

If nothing is done to save her husband and his men, they will ‘stand to the end without surrender’, she told The Associated Press on Friday.

Mr Zelensky said ‘influential states’ are involved in efforts to rescue the soldiers, although he did not mention any by name. 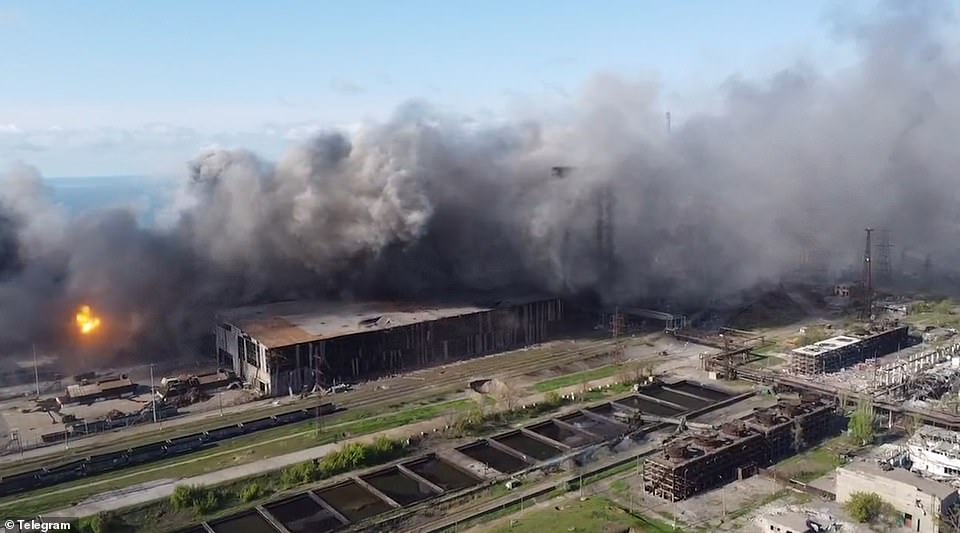 Heavy fighting has now been going on at Azovstal for three days, with clashes reportedly taking place inside the steel works as Russian forces storm inside, despite Putin publicly ordering his generals to call off the operation 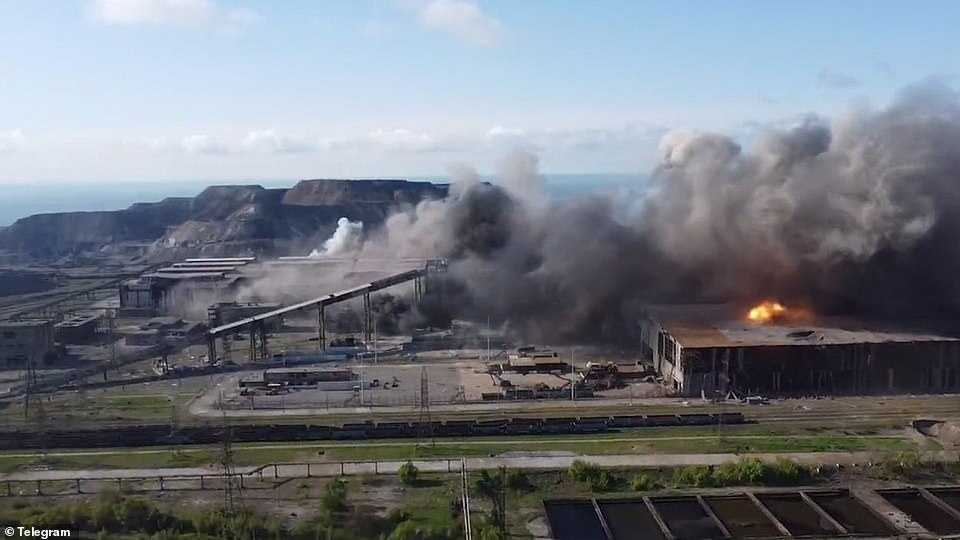 Artillery blasts rock the Azovstal steel works in Mariupol, as the UK says Putin appears to have ordered his commanders to take the complex so he has a ‘symbolic victory’ to brag about 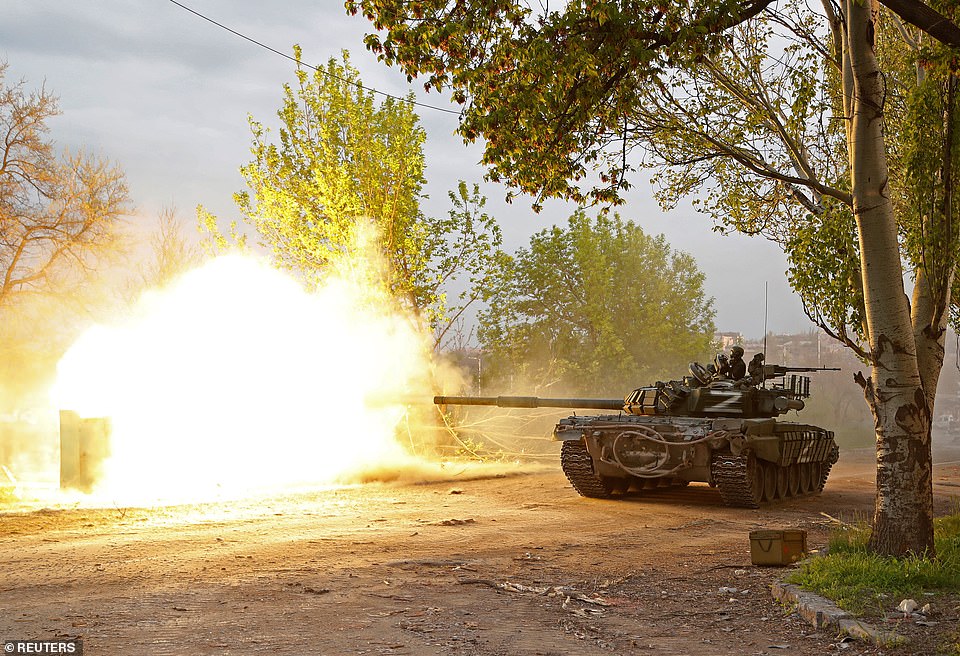 A Russian tank opens fire on the Azovstal plant, where around 2,000 Ukrainian defenders are said to be holed up having vowed to ‘never surrender’ and ‘stand till the end’

‘We are also working on diplomatic options to save our troops who are still at Azovstal,’ he said in his nightly video address.

UN officials have been tight-lipped about the civilian evacuation efforts, but it seemed likely that the latest evacuees would be taken to Zaporizhzhia, a Ukrainian-controlled city about 140 miles north-west of Mariupol where others who escaped the port city were brought.

Some of the plant’s previous evacuees spoke to the AP about the horrors of being surrounded by death in the moldy, underground bunker with little food and water, poor medical care and diminishing hope. Some said they felt guilty for leaving others behind.

Russian forces have struggled to make significant gains elsewhere, 10 weeks into a devastating war that has killed thousands of people, forced millions to flee the country and flattened large swaths of cities.

Ukrainian officials said the risk of massive shelling increased ahead of Victory Day.

Ukraine’s southern Odesa region, which was the target of two missile attacks on Friday, is to adopt a curfew.

The Ukrainian military’s general staff said that its forces repelled 11 attacks in the Donbas region and destroyed tanks and armoured vehicles, further frustrating Mr Putin’s ambitions after his abortive attempt to seize Kyiv. Russia made no acknowledgement of the losses.

The Ukrainian army also said it made progress in the north-eastern Kharkiv region, recapturing five villages and part of a sixth.

Meanwhile, one person was reported dead and three more were wounded Friday as a result of Russian shelling in Lyman, a city in Ukraine’s eastern Donetsk region.

The fall of Mariupol would deprive Ukraine of a vital port. It would also allow Russia to establish a land corridor to the Crimean Peninsula, which it seized from Ukraine in 2014, and free some Russian troops to fight elsewhere in the Donbas, the eastern industrial region that the Kremlin says is now its chief objective.

The city’s capture also holds symbolic value since it has been the scene of some of the worst suffering of the war and a surprisingly fierce resistance.