Russian President Vladimir Putin today told millions of Russians to return to work starting tomorrow despite logging a record number of infections and deaths from coronavirus in the last 24 hours.

Putin spoke about the deadly pandemic in a televised addressed from the Kremlin this afternoon and announced measures to support the Russian economy.

‘Starting from tomorrow, May 12, the national period of non-working days will be over for all sectors of the economy,’ Putin said, adding that Russia’s regions will be able to keep in place any necessary anti-virus measures.

The Russian premier went on to criticise businesses for the doubling of unemployment rates since the start of the pandemic, adding they should have held on to their employees during the crisis.

According to the official coronavirus data website set up by the Russian government, 11,656 people tested positive in the last 24 hours, with the total now at 221,344.

In this photo taken on Monday, May 11, 2020, Russian President Vladimir Putin delivers a speech while congratulating graduates of Russian military academies and universities on the 75th anniversary of the victory over Nazi Germany in WWI 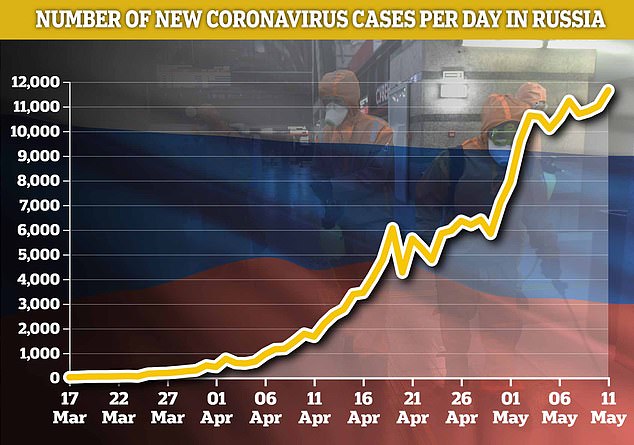 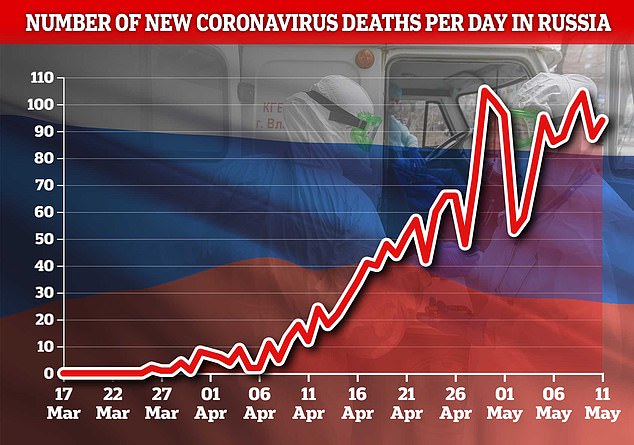 Putin stressed that the rapidly increasing number of coronavirus cases was largely down to the high rates of testing in the country. He said that Russia began the pandemic with 2,500 tests per day, which has now risen to 170,000. Officials plan for this number to be double by next month.

However, the low death toll and Russia’s methods of logging fatalities have been questioned by the opposition, while doctors have said initial test kits often returned false negative results.

With the majority of cases in and around Moscow, some regions have begun to relax restrictions which have seriously affected the economy.

Sparcely-populated Yakutia, Magadan and Yamal lifted restrictions on being outside and allowed the reopening of some businesses, requiring people to self-distance.

In Moscow, the mayor announced some industries and construction sites can begin work, but masks and gloves will be mandatory starting Tuesday.

During the address today, Putin asked regional government heads to take responsibility for enforcing social distancing measures and for delivering the money promised by the government to those in need. 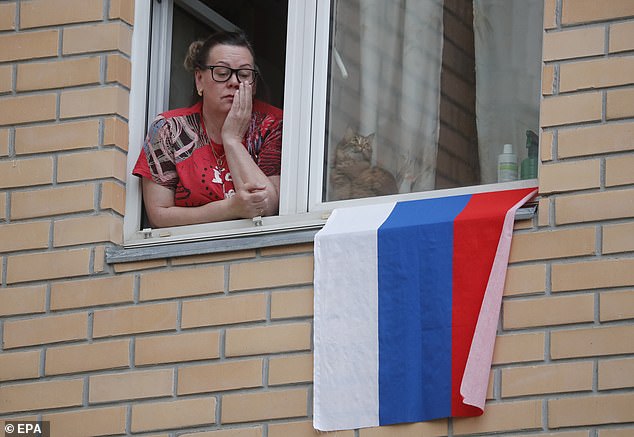 A resident looks out of a window of her flat decorated with the national flag as she attends a minute of silence in memory of the Fallen of World War II, while in quarantine at home, in Moscow, Russia 9 May 2020

The number of new cases of the novel coronavirus rose by a record daily amount to 11,656 in the previous 24 hours, making the official tally 221,344. Only Spain and the United States have recorded more cases than the world’s biggest country.

More than half of all cases and deaths are in Moscow, the epicentre of Russia’s outbreak. The Russian capital on Monday reported an overnight increase of 6,169 new cases, bringing its official total to 115,909.

Official data published on Sunday showed Moscow reported 18 per cent more deaths in April this year than the same month in 2019, raising the possibility that the official death toll from COVID-19, the respiratory disease caused by the virus, seriously understates the spread of the virus.

Government officials attribute the lower death toll and the rising and large number of cases to a vast testing programme, under which they say 5.6 million tests have been conducted.

Government officials say the high testing numbers have allowed doctors to quickly identify people who need medical care and make sure they receive it in a timely fashion.