Vladimir Putin’s former bodyguard promised to turn Russia’s opposition leader Alexei Navalny into a ‘juicy beefsteak’ as he challenged him to a duel in a video message.

In the extraordinary public outburst, he attacked Navalny for his investigation into large-scale corruption at the National Guard.

Zolotov admitted ‘shortcomings in terms of corruption’ in his governmental agency but rejected Navalny’s claim that he personally profited from the shady deals.

President Vladimir Putin’s former bodyguard Viktor Zolotov, the chief of the National Guard, challenged opposition leader Alexei Navalny to a duel in a video message (above)

The 64-year old Zolotov, who rarely makes public appearances, took to YouTube to vent his frustration with the opposition leader.

Zolotov said he was insulted by Navalny’s allegation and felt compelled ‘as an officer’ to challenge him to a duel.

‘I’m simply challenging you to a fight: to a ring, to a tatami, anywhere where I promise I will make a good juicy beef steak of you,’ Zolotov said, seated at the desk and shaking his fist.

Navalny, Russia’s most popular opposition leader, is currently in jail serving a 30-day sentence for organizing an unsanctioned public protest.

Last month, he published an investigation alleging that at least $29 million had been stolen in procurement contracts for the National Guard.

Navalny rose to prominence thanks to his investigations uncovering official graft and has spearheaded mass anti-government protests across Russia, rattling the Kremlin 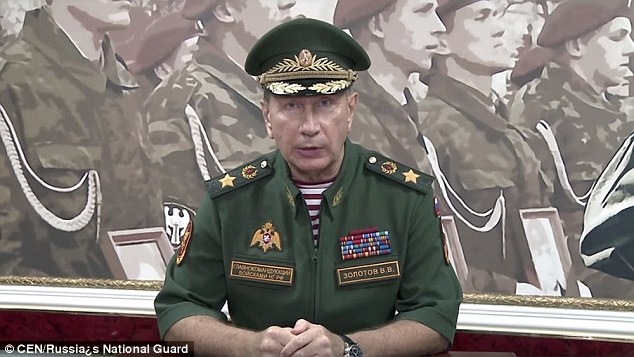 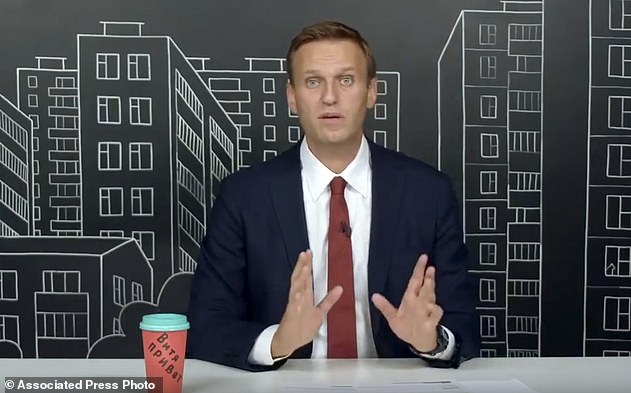 Rallies took place on Sunday in all of Russia’s 11 time zones, and the National Guard’s riot police violently cracked down on the protests in some of the cities.

Zolotov served in Putin’s security detail for 13 years and is believed to be one of the president’s closest allies.

His Tuesday speech is a radical departure from the usual Kremlin policy of avoiding mentioning Navalny’s name in public.

Over the years Putin has ignored Navalny’s investigations and protest rallies, refusing to even call him by his name.

However, Navalny has run into trouble with Russian law enforcement as his prominence has grown.

He was convicted on two separate sets of charges and his family members and allies have faced criminal prosecution. 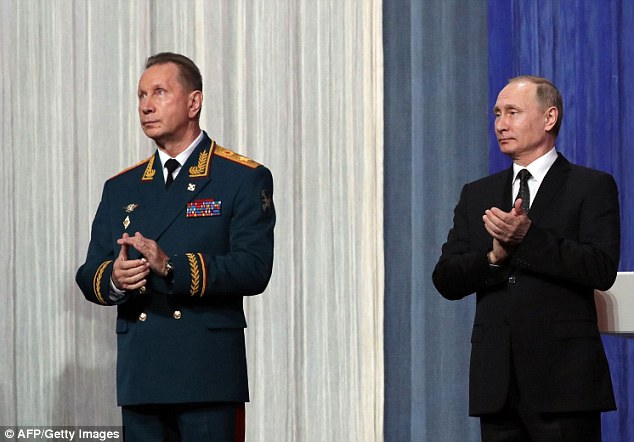 Zolotov (left, with the Russian leader in March last year) served in Putin’s security detail for 13 years and is believed to be one of the president’s closest allies

The Kremlin on Tuesday dismissed suggestions that it encouraged Zolotov to make his statement.

Putin’s spokesman, Dmitry Peskov, told reporters that Zolotov did not run his speech by the president and that the Kremlin doesn’t view it as a physical threat to Navalny.

While most of Navalny’s allies treated Zolotov’s statement as a joke, others saw chilling overtures in the former bodyguard’s emotional appeal.

‘Zolotov’s public threats against Navalny should be taken without any irony,’ said Ilya Yashin, an opposition activist and close friend of slain opposition leader Boris Nemtsov.

Yashin referred to Zolotov’s close ties to Chechen leader Ramzan Kadyrov whom the opposition considers to be behind Nemtsov’s 2015 murder: ‘Because of the Nemtsov case we know how the Chechen bandits react when their friends feel offended.’