Vladimir Putin’s relatives are concerned about coughing fits, constant nausea and a lack of appetite, it is claimed, after the Russian leader allegedly underwent a medical examination over the weekend.

His circle is worried that his ‘thinness and persistent cough’ is becoming noticeable and will be seen by the elites in Russia as a ‘sign of the leader’s rapidly deteriorating health’, according to Telegram channel General SVR, which has long claimed he is suffering from cancer despite the Kremlin insistence he is in good health.

Despite appearing considerably bloated and puffy in the face, the Russian president has lost 18lbs in recent months, said the channel which purports to have sources inside the Kremlin.

He let slip one cough during a discussion about sporting provision in Ukrainian regions he annexed from Ukraine, and hurriedly continued speaking as if trying to cover and move on as quickly as possible.

The Telegram channel – which cited no proof for its claims of Putin’s ill health – reported: ‘Both Putin himself and his relatives, as well as doctors, are worried about the president’s coughing fits, as well as constant nausea and lack of appetite due to medication and a specific diet [for] oncology.

‘In the past few months, Putin has lost eight kilograms, and those around the president are worried that the thinness and persistent cough that is noticeable in progress will be regarded by the elites as a sign of the leader’s rapidly deteriorating health.’

Putin was only seen once between Friday and Sunday – the period during which he is said to have undergone a medical examination amid declining health – in an unremarkable online meeting with the governor of former GULAG region Magadan, Sergey Nosov.

However, such meetings are often believed to be ‘canned’ – recorded at an earlier date, edited and then broadcast as though they are live.

The General SVR channel has further claimed that Putin is particularly bad tempered over his troops poor performance in the war, berating and then cutting off defence minister Sergei Shoigu during a recent online meeting.

Putin resorted to screams and profanities, it was alleged, then cut the call amid a coughing fit.

‘After Shoigu was disconnected from participating in the video conference, Putin started talking to other representatives of the leadership of the military bloc, but could not continue due to an attack of severe coughing, so much so that the meeting had to be stopped, and the president needed medical help,’ claimed the channel which says it has sources in the Kremlin.

Earlier at the meeting Putin was told that the loss of the Su-30 plane – in which two test pilots were killed – was unlikely to have been sabotage.

The channel does not specify which of Putin’s relatives are supposedly worried about his condition. 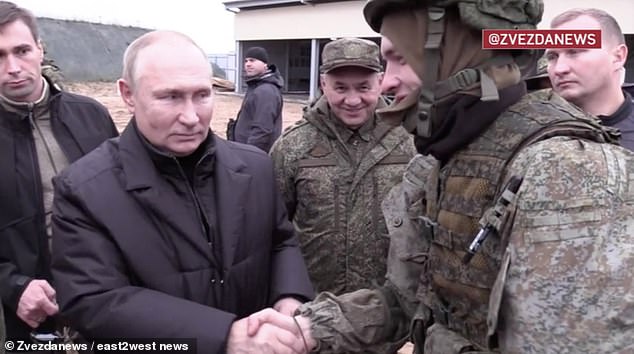 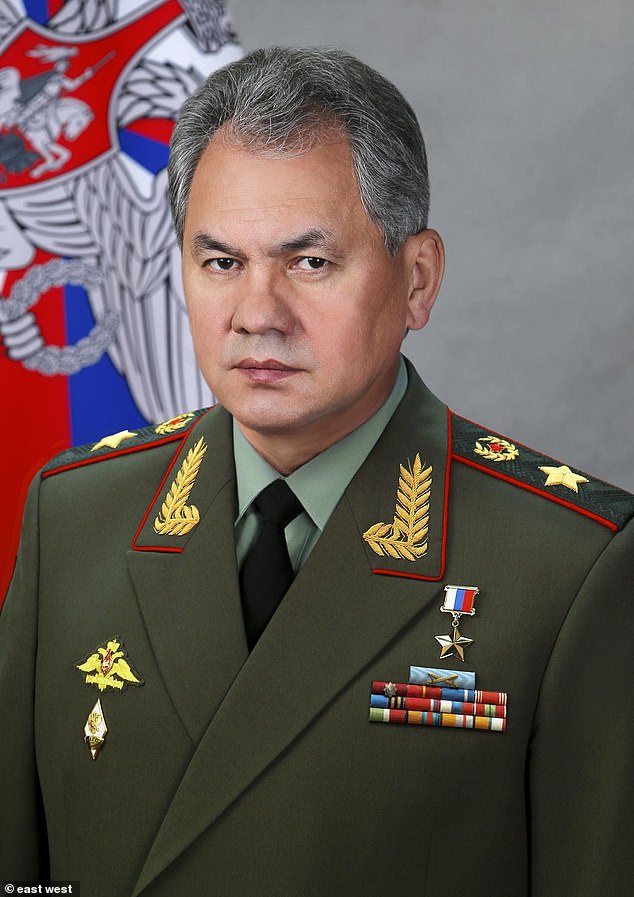 Putin is said to be particularly bad tempered over his troops poor performance in the war, berating and then cutting off defence minister Sergei Shoigu (pictured) during a recent online meeting

Ever since Putin ordered his military forces to invade Ukraine on February 24, rumours have been swirling about the state of his health.

Over the summer, the Russian president was pictured awkwardly swatting mosquitos from his face with one arm while the other hung limply by his side.

Similarly, at a huge Victory Day parade in Moscow in May, the now 70-year-old autocrat appeared to walk with a limp and had a blanket over his lap, while in April he was seen gripping a table during a televised meeting with Shoigu.

The General SVR channel has long claimed that Putin is suffering from abdominal cancer, Parkinson’s disease and a schizoaffective disorder.

Its claims cannot be verified but it was among the first to report in advance the shape of Putin’s recent mobilisation strategy.

The channel is reportedly authored by an exiled Kremlin lieutenant-general, known by the alias Viktor Mikhailovich.

Last week, Putin was pictured during a visit to the Ryazan region southeast of Moscow alongside Defence Minister Sergei Shoigu, where he shot a newly developed sniper rifle in what was one of his increasingly rare appearances designed to boost morale of Russian troops.

Wearing ear protectors and safety glasses, Putin lay under a net and fired several shots from the Russian SVD sniper.

He was also filmed speaking to officers, shaking hands with them and wishing them ‘good luck’.

The training camp is for newly mobilised Russians, with the state video aimed at boosting moral as the war in Ukraine continues.