An endangered Borneo pygmy elephant has been found dead and riddled with 70 bullets in Malaysia after it was killed by poachers for its tusks.

The male elephant was found floating in a river in Sabah, a region of Malaysia, on Wednesday last week after fishermen noticed its corpse tied to a tree.

A post-mortem revealed the animal had been shot 70 times at close range including by one bullet that pierced its left temple, killing it.

Examiners said it is impossible to know in what order the bullets entered its body, or how long it suffered for before dying.

A Borneo pygmy elephant has been found shot dead and floating in a river in Malaysia by poachers who stole its tusks, animal workers say 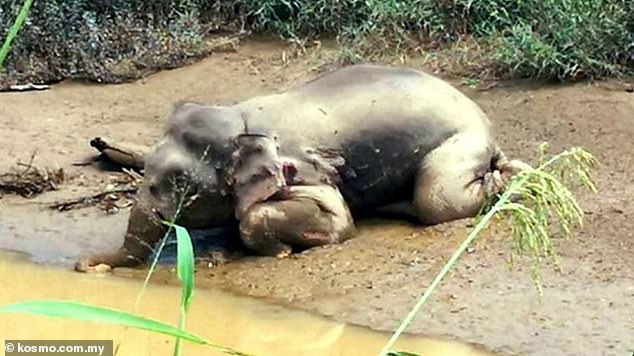 The elephant was shot 70 times from close range including one bullet fired through its temple, which was fatal. Medics say it is impossible to know how long it suffered before dying

However, they did say that death would have been instant, as soon as it was shot through the temple.

Sabah Wildlife Department director Augustine Tuuga said the animal’s death was ‘cruel’, regardless of how long it suffered for.

Video shows how the body was discovered – mostly submerged in murky brown water and tied to the bank by a string.

The fishermen alerted authorities who had to fetch heavy machinery from a nearby farm in order to get the body on to the shore.

It was then taken for a post-mortem, which confirmed that the tusks had been sawed away, the Straits Times reported.

Police are now hunting for a team of at least four or five poachers which the believe is responsible for the killing.

There are only around 1,500 pygmy elephants left in the wild and the species is completely protected under Malaysian law.

Anyone found guilty of killing one of the animals could be jailed for five years or face a fine up to $60,000. 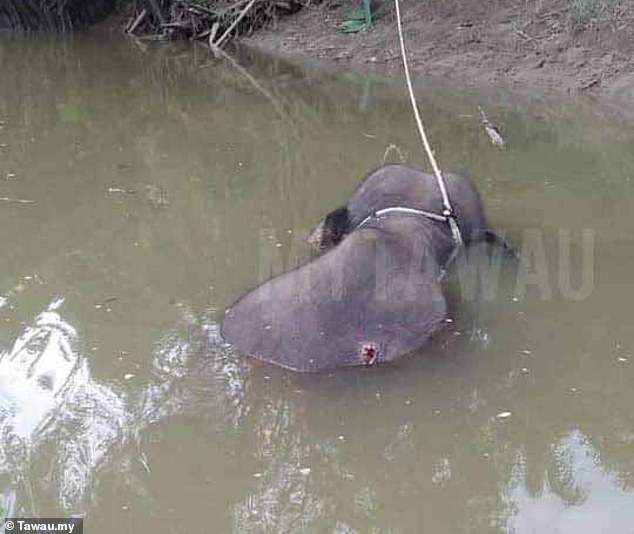 Investigators believe a team of at least four or five poachers are responsible for the killing, and are now hunting for those responsible 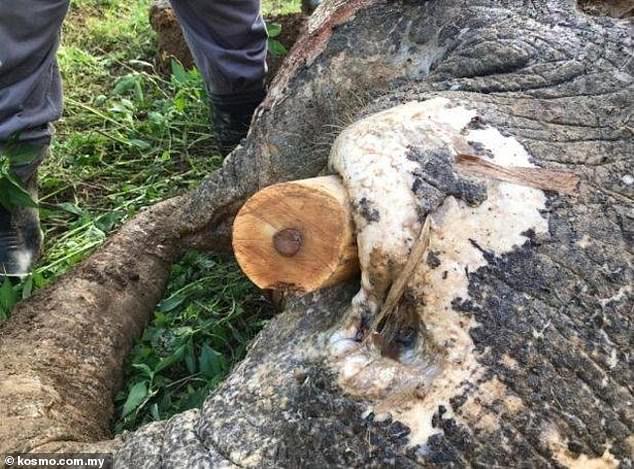 Police were forced to use heavy machinery to get the elephant’s body out of the river, at which point they realise its tusks had been sawed off