Protesters who flooded the streets of Melbourne have legitimate concerns about Covid laws, but are demonised because of a few extremists threatening Dan Andrews, Q+A panelists argued.

The ABC show held a fiery debate about the weekly demonstrations where thousands voiced anger about lockdowns, vaccine mandates and pandemic laws.

Some panelists argued judging them all by those who brought nooses and gallows was ‘gaslighting’ Australians into ignoring real concerns of everyday people.

Another shared the emotional moment one of them broke down in tears telling him he was protesting because he hadn’t seen his son in a year.

Mr van Cuylenburg said when he travelled through Melbourne earlier this week and encountered the ‘ridiculous’ protests he at first felt ‘really angry’.

But then he stopped to get a coffee and one of the protesters who looked ‘exhausted’ and was carrying ‘not the nicest’ sign sat close to him, and they struck up a conversation.

‘We chatted about how hard he’d been protesting. Then he said, “And I haven’t seen my son in a year”,’ he recalled.

‘He was really teary.

‘It just made me realise that there’s been a massive missed opportunity to unite us.’

Mr van Cuylenburg said he felt that leadership should have been coming from the very top of government. 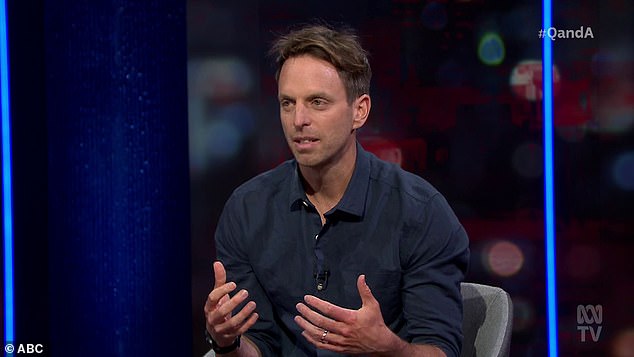 Hugh van Cuylenburg (pictured), founder of The Resilience Project shared on Q&A how one of the protesters broke down in tears to him as he revealed he hadn’t seen his son in a year

‘What we needed was a really strong leader. I’m not pointing the finger at Scott Morrison… well, maybe I am,’ he said.

‘Just a charismatic, strong leader to really unite us.’

Comedian Arj Barker, also on the panel after being stuck in Victoria’s lockdown, agreed that the government ‘failed’ the Australian people.

‘The government screwed up,’ he said referring to other panellists’ comments about bungled hotel quarantine, vaccine rollout schemes, and overly hard lockdowns. 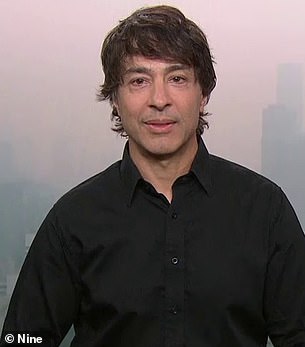 Comedian Arj Barker, 45, told the Q&A audience the government has ‘screwed up’

‘I believe we got through it because as a herd we were protecting the more susceptible members.

‘We all chipped in to do the right thing.

‘I know people are angry. And I know they’re not all right-wing extremists.

‘People are mad… there are people protesting, yelling, “Dictator Dan! Dictator Dan!” [but] I think that’s a pretty disrespectful way to refer to Dan Andrews.’

An audience member asked why conservative commentators were not condemning protesters who displayed violent or ‘neo-Nazi’ behaviour.

Propaganda stickers and other material pushing white extremist views have been found littering rally sites and some protesters carried a set of gallows through the Melbourne CBD in November.

John Roskam, executive director of the Institute of Public Affairs, a conservative think tank in Melbourne, responded by insisting that painting all the protesters as anti-vaccine extremists was ignoring legitimate concerns.

‘The Victorian Government has passed a law that allows indefinite detention without access to a lawyer at the decree of a public servant. Police that have shot protesters in the back with rubber bullets. People have lost their businesses,’ he said. 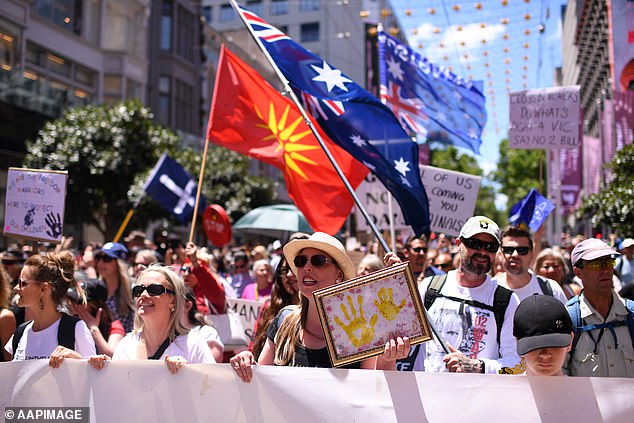 John Roskam, executive director of the Institute of Public Affairs, said tarring all the Melbourne protesters (pictured) with the ‘extremist’ brush was ‘gaslighting’ the public

Host David Speers asked why physical threats such as ones that have been directed at Dan Andrews and Mark McGowan haven’t been condemned.

‘There were 100,000 people (at the protest in October) and two or three people brought papier-mache gallows. We need some perspective,’ Mr Roskam replied.

‘I think if we’re talking in the terms you are, what we’re doing is de-legitimising legitimate protests responding to the real concerns of hundreds of thousands of Australians.’

Mr Roskam said right-wing extremists should be condemned, but it was a ‘double standard’ to not also condemn the extreme left, such as when then-prime minister Tony Abbott was burned in effigy.

‘We should absolutely be concerned about extreme elements of the right and the left,’ he said.

‘But by talking in just these terms and focusing on the views of a fraction of the hundreds of thousands of people – I think we’re gaslighting the Australian public.’ 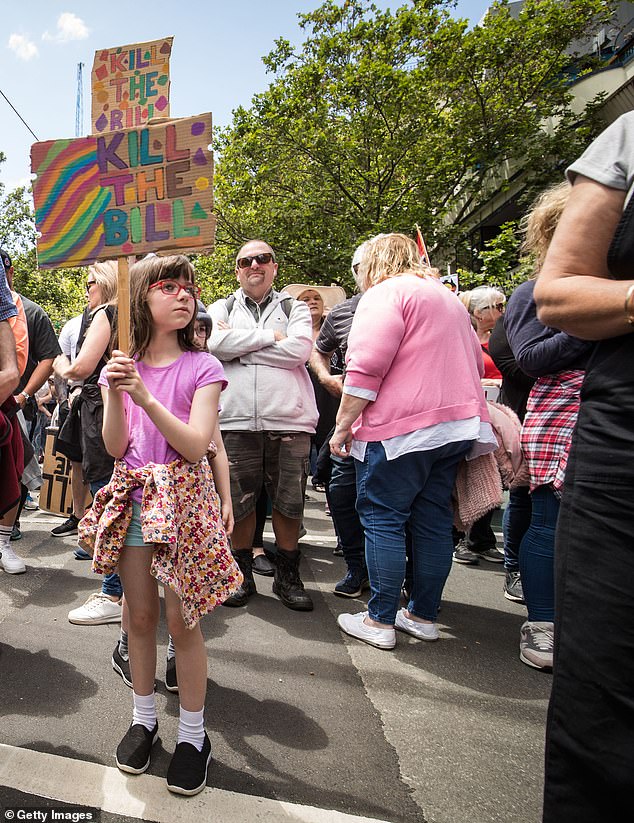 Victoria has become Australia’s first state to introduce specific laws for managing a pandemic, with a controversial bill passing both houses of parliament.

The bill received final approval later the same day in the lower house, where the government has a commanding majority, following the opposition unsuccessfully moving more amendments.

After receiving royal assent from the governor of Victoria, the laws will come into effect from December 16, when a current state of emergency expires.

Under the legislation, the premier and health minister will have the power to declare a pandemic and enforce orders such as lockdowns, mask-wearing, vaccination mandates, and quarantine.

The pandemic orders can differentiate between cohorts of people based on characteristics such as age and vaccination status, relevant to the public health risk.