Q&A host Stan Grant scolded a female Labor minister for ‘talking past’ an Afghan asylum seeker who had complained about spending a decade in Australia without gaining permanent residency.

Qayyum Shah had asked the ABC panel about why, in his view, asylum seekers were treated badly.

Finance Minister Katy Gallagher, from Labor’s Left faction, was annoyed when Coalition frontbencher Jane Hume pointed out Australia had been closed for two years because of the pandemic.

‘I don’t accept it was just Covid-related,’ Senator Gallagher said.

‘I do accept that you were obsessed with Operation Sovereign Borders.’

Grant interrupted the female senators as they had a political spat in front of a man who left a country where girls can no longer get an education.

‘No, I’m sorry. I’m sorry. Can I stop…? Because you’re talking past the man who asked the question,’ he said.

Grant butted in: ‘And you’re talking to each other.’

The minister was unamused: ‘I’m not, Stan.’

Grant replied: ‘No, you are. Qayyum, you have something to say.’ 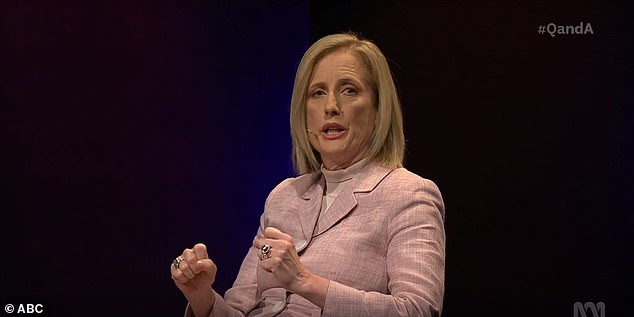 Finance Minister Katy Gallagher (pictured), from Labor’s Left faction, was annoyed when Coalition frontbencher Jane Hume pointed out Australia had been closed for two years because of the pandemic

Mr Shah, who has been on a on a bridging visa for 10 years, told the panel he had come to Australia as a student after working as a finance manager in Afghanistan, which the Islamic fundamentalist Taliban last year retook.

‘I didn’t come even by boat,’ he said before holding up a green folder.

‘And this is my document. Full of the documents.

‘I work with USAID, I work with World Bank project as a finance manager in Afghanistan, which Taliban was targeting.’

Grant pressed Senator Gallagher to follow up his case, only for the Finance Minister to defy the matter to Immigration Minister Andrew Giles and blame the previous Coalition government for under resourcing the Department of Home Affairs.

‘Oh, for sure. And I’m sorry if you felt like I was talking past you,’ Senator Gallagher said.

‘There was no intention to do that at all. But, absolutely, I will make sure.

‘But on the broader point, we did make some commitments about dealing with people who had been on temporary protection visas for long periods of time – 10 years, certainly years – to convert those to more permanent arrangements.

‘And we are doing that.’