An air hostess broke her leg during a Qantas flight when the plane suddenly lurched in turbulence.

The flight was coming into Canberra from Perth at 10pm on Tuesday when the seat belt signs were switched on.

The pilot was descending at the maximum speed of 320 knots at the request of air traffic control – but strong winds pushed the plane over the limit.

Trying to slow down by pulling up the plane’s nose, he pulled the control stick back to override the autopilot.

But, instead of switching to a different autopilot mode called ‘control wheel steering-pitch’, the autopilot disengaged totally.

This meant the plane suddenly lurched down and back up when hit by strong wind as the aircraft’s pitch angle changed by 3.87 degrees in one second.

One hostess, who was standing up, felt the cabin floor smash into her leg.

An Australian Transport Safety Bureau report on the incident reads: ‘The cabin crew member recalled that, while standing in the rear galley and preparing for arrival, she felt the cabin floor drop and then quickly come up.

‘The aircraft movement also resulted in a second cabin crew member in the forward galley falling forward and hitting her head on a trolley. She also received injuries to her knees, back and neck.’

The hostess with the broken leg had to lie in the rear gallery for the remaining 20 minutes of the flight after being given first aid. 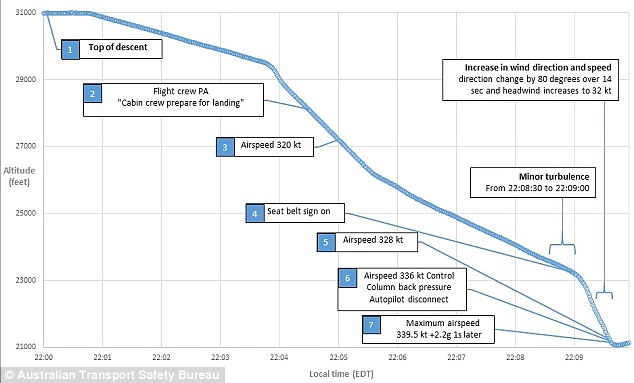 Both injured crew members were taken to hospital when the plane landed. None of the 177 passengers was injured.

The report said that the reason the autopilot disengaged was because the plane had been modified without the pilot knowing.

‘Modification of the autopilot had inadvertently left the aircraft vulnerable to this type of scenario,’ said the report, which did not apportion any blame.

Qantas has since advised pilots not to disengage autopilot even when the plane is going too fast.

A Qantas spokesman defended the pilot, saying: ‘The report stated that the pilot in command performed his duties consistent with his training and expertise.’