Qantas is among the airlines forced to divert flights away from Kashmir following the military clash between India and Pakistan in Kashmir.

The airline on Thursday changed the route of its London to Singapore service, which thousands of Australian use each week to return home from Eurpoe, amid escalating tensions in the region.

A Qantas spokesman said flights QF1 and QF2 had been re-routed in both directions.

‘We’ve changed our flight path which adds around 20 minutes,’ a Qantas spokesperson said.

Flights through Indian airspace are continuing, but all domestic commercial and international flights have been cancelled to and from Pakistan pending further notice.

Passengers due to fly with Thai Airways from Europe to Bangkok have suffered from some of the worst disruption resulting from the crisis.

Ten of the airline’s flights scheduled over the past two days have also been cancelled, but Thai Airways said it would resume services after being granted permission from China to use its airspace.

Thousands of passengers have been affected by the disruption as carriers struggle to maintain the roughly 220 flights that run between Europe and Southeast Asia every day.

The airline was forced to change the route of its London-Singapore service, due to arrive in the city on Thursday (pictured Pakistani airspace on Thursday morning)

The conflict between India and Pakistan deepened on Wednesday after the latter claimed they carried out air strikes and shot down two Indian military jets.

The day before, Indian warplanes aid it downed a Pakistani jet for the first time since a war in 1971, prompting leading powers to urge both of the nuclear-armed countries to show restraint. 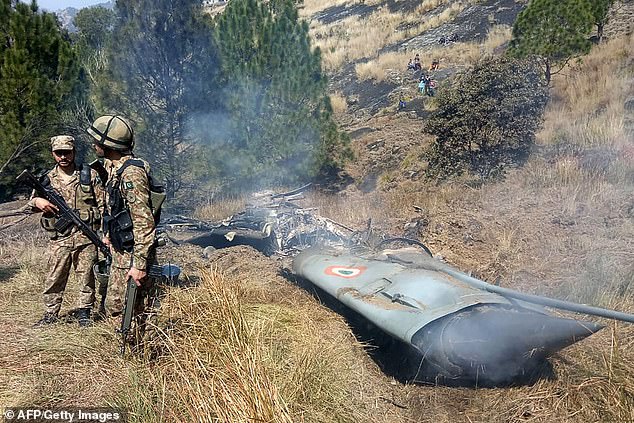