A Qantas plane has been forced to abandon takeoff after terrified passengers reported seeing smoke and flames coming from the engine.

Over a hundred passengers were removed from the QF91 aircraft due to fly from Sydney to New Caledonia following reports of an engine fire on Sunday.

Sydney Airport’s air traffic control tower notified the pilot of the issue with the starboard engine, who then shut down the engine as a precaution.

The plane was escorted from the runway back to the terminal to allow passengers to disembark and engineers to assess the aircraft. 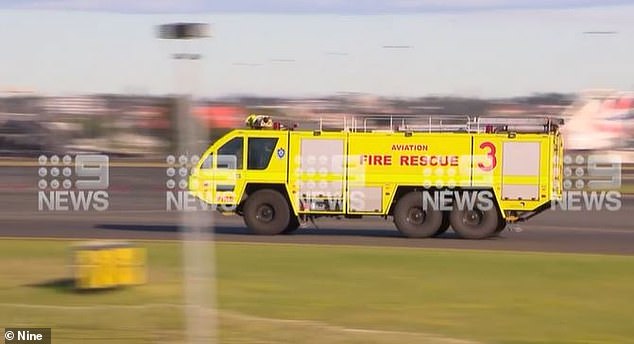 Passengers scheduled to take-off from Sydney about 7.40am on Sunday were put on another flight to Nouméa.

Qantas said the aircraft has since been cleared to fly and that there was no sign of fire when the engine was shut down.

‘The pilots followed procedure and shut down the engine as a precaution after being alerted by the control tower while taxiing,’ the airline said.

‘There was no warning light in the cockpit and no sign of fire when the engine was shut down. Engineers have inspected the aircraft and cleared it to return to service. Passengers have been re-accommodated on to another flight this morning.

‘We thank passengers for their patience and understanding.’

The pilot is understood to have sent a ‘pan-pan’ alert – a low-level risk alert not posing an immediate danger to life – to the air traffic control tower.

The alert asked for assistance from aviation fire and rescue crews with a number of firetrucks later escorting the plane back to the terminal.

It’s understood at least 147 passengers were delayed in the latest issue to hit Qantas off the back of a tough year for the beleaguered airline. 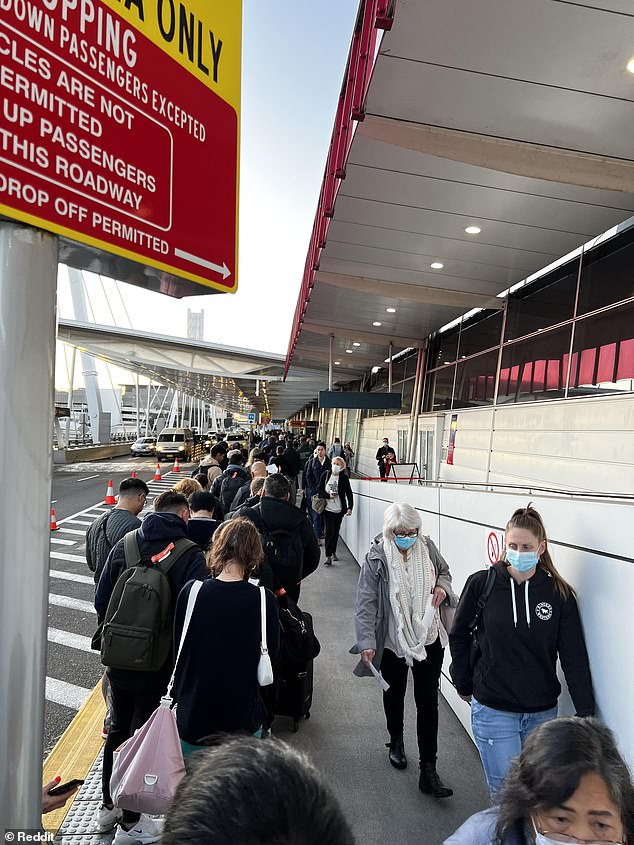 It’s understood at least 147 passengers were impacted in the latest saga to hit Qantas off the back of a tough year for the beleaguered airline (pictured, queues at Sydney Airport) 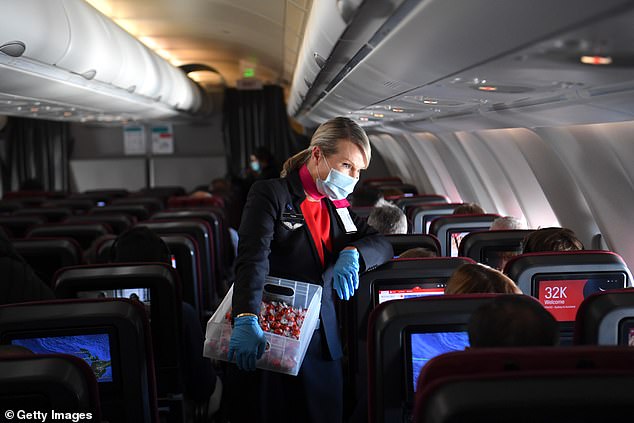 A Qantas spokesperson said the aircraft has since been cleared to fly and that there was no sign of fire when the engine was shut down (pictured, Qantas staff in April, 2021)

Traveller have reported long delays, lost luggage and problems with customer service – with the airline last week suffering a computer glitch that grounded several flights and throw the travel plans of hundreds into disarray.

Hundreds were left waiting onboard packed planes on runways across the country last Sunday night after an IT glitch delayed up to a dozen domestic flights.

Qantas said the issue was discovered at about 4:30pm on Sunday and had impacted 12 domestic flights with some grounded for nearly two hours. The glitch was fixed at about 6pm but caused flow-on delays throughout the evening.

Furious travellers keen to get home in time for the start of the working week took to social media to vent about the delays.

‘Any update on your international computer outage impacting every single flight from departing???? Sitting on fully packed plane on tarmac for 90mins for 2hr is pretty ridiculous!’ one grounded traveller fumed on Twitter. 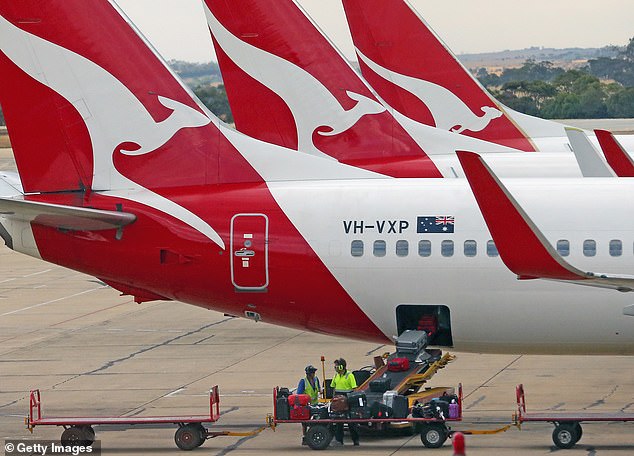 The computer glitch has also affected Qantas flights across the Tasman trying to take off in New Zealand.

‘Still waiting at 7pm to leave on my Qantas plane from Auckland that was meant to leave at 5.40. Paperwork still has to be signed off,’ one traveller wrote.

Wet weather as well as a surge in flu and Covid cases for airline staff has been blamed for the pattern of delays and cancellations in Sydney and Melbourne.

Qantas has cut more flights from its schedule as the airline is plagued with industrial disputes, understaffing, poor organisation, cancellations and delays as furious passengers share their horror experiences of travelling with the national carrier.

The airline has also came under fire over a recent price hike of domestic airfares.

Domestic airfares have soared so high in recent weeks that it’s cheaper to book an overseas trip than travel to some of Australia’s best destinations. 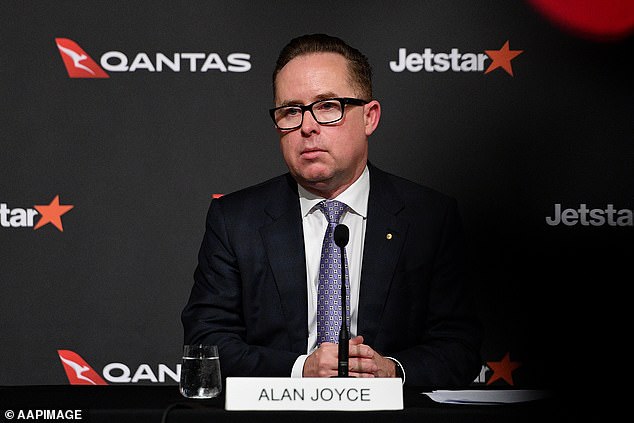 Qantas chief executive Alan Joyce (pictured) and other airline bosses have come under fire over flight cancellations and delays, queues and baggage losses

Qantas and other airline carriers have up hiked prices since May as tourism operators crippled by the Covid-19 pandemic try to recover.

The price hikes come as Qantas chief executive Alan Joyce, and airline bosses have come under fire over flight cancellations and delays, queues and baggage losses.

The average return economy domestic airfare currently costs $409, an increase of about 24 per cent from May, according to travel deals website Kayak.

Several routes have seen an increase of as much as 85 to 96 per cent.

Gold Coast residents have been slugged with the highest airfare prices in the country, where return economy fares to Melbourne and Sydney are up 96 per cent and 91 per cent, respectively, new data shows.

Passengers flying from Cairns to Brisbane have seen a 90 per cent price hike in the last two months, while the price of a return ticket from Brisbane to Alice Springs has risen by 24 per cent to $1058. 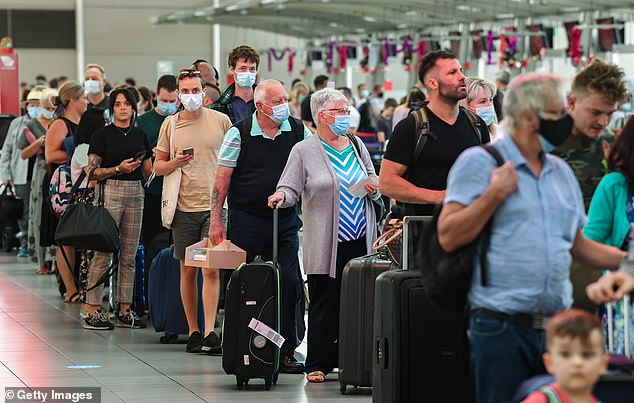 Domestic airfares have soared so high in recent weeks that it’s cheaper to book an overseas trip than travel to some of Australia’s best destinations (pictured, queues at Sydney airport)

It’s $100 cheaper for Brisbane travellers to book a return airfare to Fiji with Qantas.

‘The cuts to domestic flying levels for July and August are being deepened with capacity moving from 107 per cent of pre-COVID levels to 103 per cent,’ a recent statement read.

‘These additional reductions will progressively flow into industry booking and reservation systems in the coming days. The Group will continue to monitor market conditions and adjust capacity as needed.’

The national carrier estimates its fuel bill this financial year to be $1.7 billion more than it was pre-pandemic.