By Karen Ruiz and Charlie Moore For Daily Mail Australia

Chaos has erupted at Melbourne Airport after travellers at Qantas terminal were forced to evacuate after a fire alarm was triggered.

Hundreds of passengers were told to exit the building on Tuesday morning after a smoke detector at the terminal food court went off.

According to reports, the incident was deemed a false alarm and crowds are now being allowed back inside but must go through security again.

Passengers are now facing major delays as photos of the scene posted on social media show massive crowds forming at the check-in queues.

The evacuation comes just one day after travellers at international airports were stuck in huge queues after all electronic passport gates crashed.

Pictures from international terminals across Australia showed huge lines both leaving and entering the country – with people queuing for up to two hours.

Emergency water bottles were handed out as thousands were left cramped into arrivals halls after long-haul international flights.

The lines were longest at Sydney and Melbourne airports where thousands arrive for work at the start of each week. 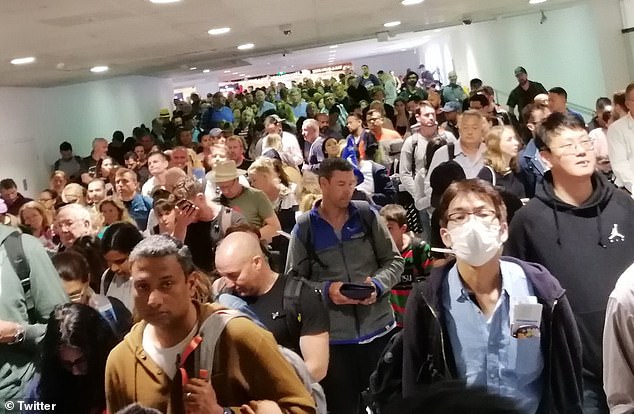 On Monday, travellers were stuck in huge queues due to faults with electronic passport gates. Pictured: Sydney Airport on Monday

The delays were caused by an IT failure of SmartGates at about 6am which Border Force and the Home Affairs department were working to fix.

The technology breakdown meant all passengers had to have their passports checked manually.

Border guards were seen patrolling the enormous queues, telling travellers they may be waiting for up to two hours.