One of the new stadiums under construction for the 2022 World Cup in Qatar, dubbed the ‘vagina stadium’, is taking shape ahead of its completion next year.

Construction of the 40,000-seater venue in the port of Al-Wakrah is due to be finished in 2019, three years ahead of the start of the tournament.

It will be one the last designs by British architect Dame Zaha, who died suddenly of a heart attack in 2016, aged 65.

Among her other works were the Aquatics Centre at the 2012 London Olympics, the MAXXI Museum in Italy and the Guangzhou Opera House in China.

When the Al-Wakrah stadium’s designs were first released in 2013 they were said to have been inspired by the flowing shape of a dhow boat, a traditional Arabian pearl diving and fishing vessel.

The drawings were topped with a structure resembling the sails of a dhow.

But the images went viral with commentators suggesting the stadium looked more like a woman’s private parts.

The shell of the Al Wakrah stadium, dubbed the ‘vagina stadium’ is starting to take shape as the tournament kick-off approaches 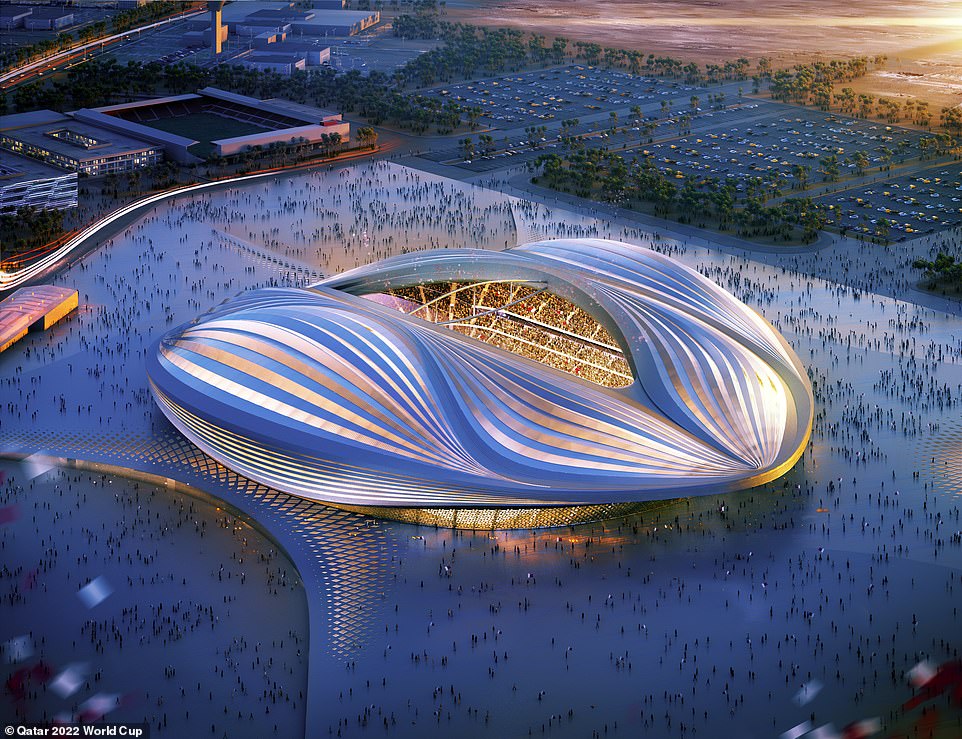 An artist’s rendering of how the stadium will look when it hosts matches at the 2022 World Cup, which has been designed to replicate the sails of an Arabian dhow boat – a pearl diving and fishing vessel 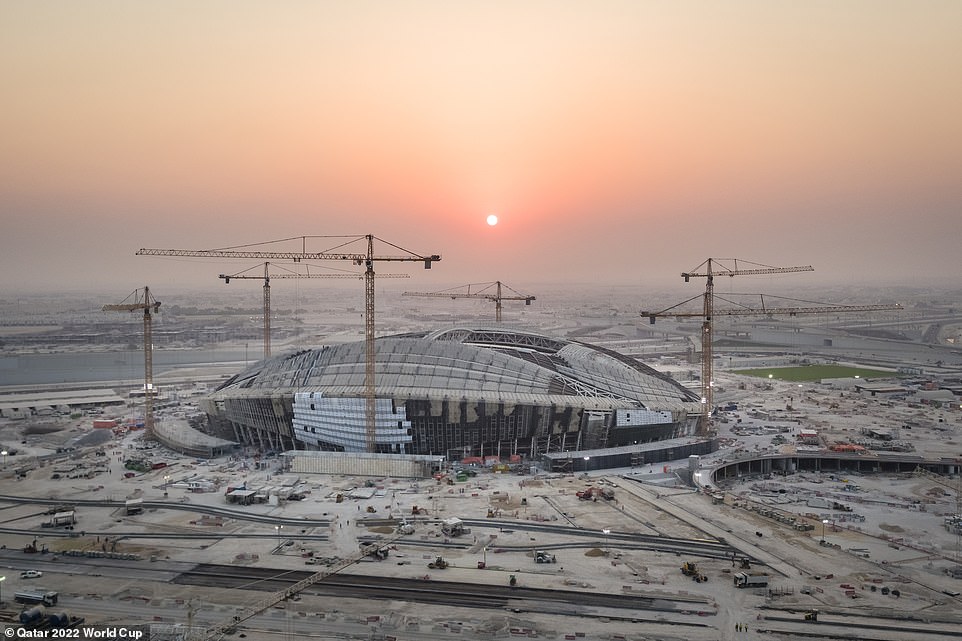 Designed to reflect the maritime heritage of Al Wakrah, British architect Dame Zaha, who suddenly died of a heart attack in 2016, was inspired by the traditional local boats when she came up with the stadium’s shape

At the time Dame Zaha was angry at the comparison, saying: ‘It’s really embarrassing they come up with nonsense stuff like this. What are they saying? Everything with a hole in it is a vagina? That’s ridiculous.’

Iraqi-born Hadid, who won the prestigious Pritzker Architecture Prize in 2004, added that ‘if a guy had done this project there wouldn’t have been the same level of criticism’.

The Al-Wakrah stadium, which is 12 miles south of the capital, Doha, was designed to keep out the desert heat and will also use a revolutionary new air-conditioning technology which will bring temperatures down to around 72F for the fans and players.

The tournament has already been moved to the winter months to avoid the searing summer temperatures in the Gulf.

As part of its legacy for the 2022 World Cup Qatar will be dismantling the stadium afterwards for it to be rebuilt in the developing world.

More than 20,000 seats will be removed from Al-Wakrah and transported to countries in need of football infrastructure.

In its promotional material, Aecom, the firm that won the Al-Wakrah contract with Zaha Hadid Architects, said of the designs: ‘Inspired by the dhow boat that carried generations of local fishermen and pearl divers, the stadium weaves together Qatar’s past with it progressive vision for the future.

‘Sustainable materials and practices will be used throughout the stadium and the pitch and spectator stands will be cooled to a perfect temperature for football.’ 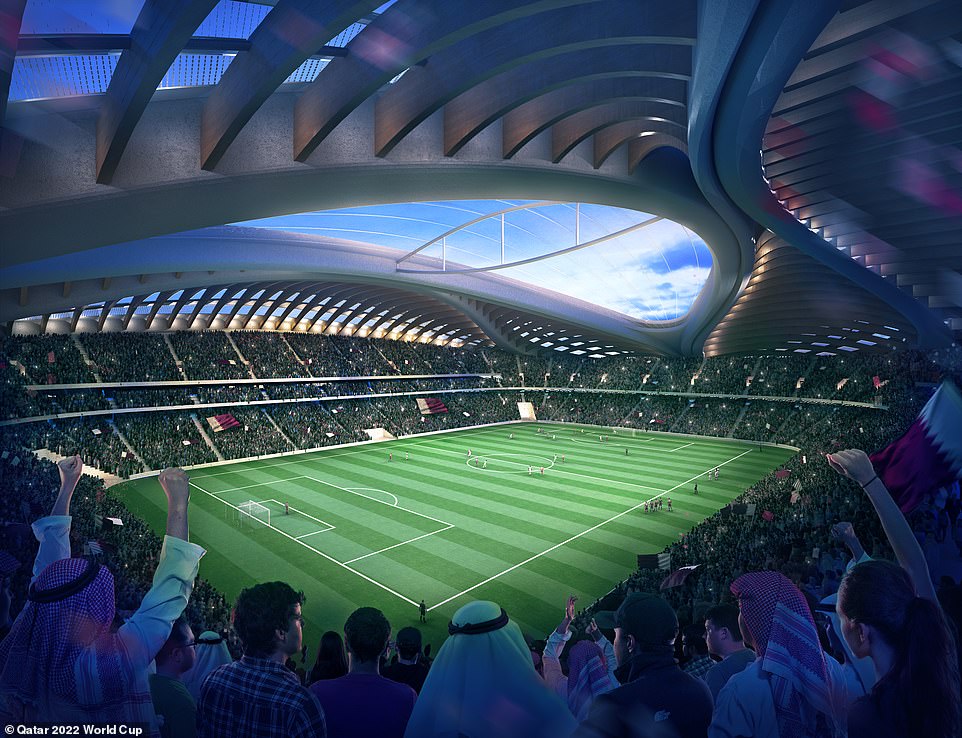 A combination of a retractable roof and innovative cooling system will keep out the 30C Qatari heat of November. Artist impression of the at Al Wakrah stadium 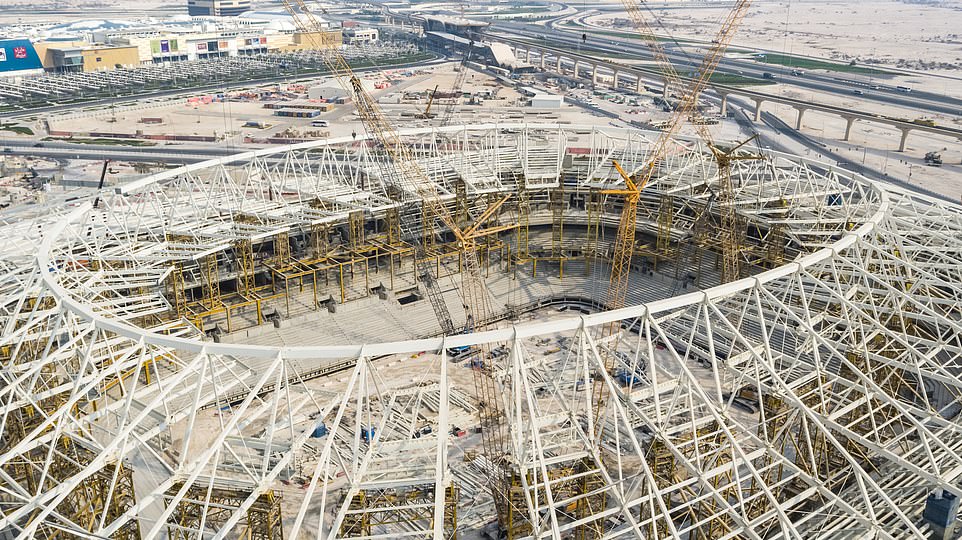 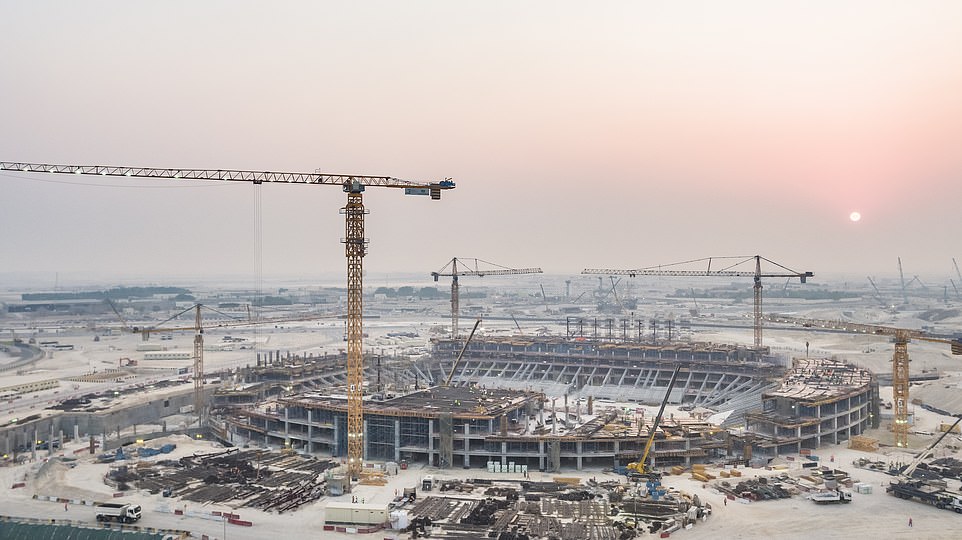 Al Thumama Stadium was inspired by the ‘gahfiya’, a traditional woven cap worn by men across the Middle East

But some critics thought the unintentional comparison with female genitalia was for the good.

‘After all why not have 45,000 people crammed inside a woman’s reproductive system? It’s not like they haven’t been there before.’

Qatar is building eight stadiums for a 32-team World Cup, although FIFA boss Gianni Infantino has said he would like to expand the tournament to 48 teams, which would involve Doha co-hosting with its Arab neighbours.

He has admitted the chance of this is small because of a Saudi-led blockade of Qatar, but ‘worth trying’.

With exactly four years from the start of the FIFA World Cup in Qatar the eight stadiums that will play host to the tournament are taking shape.

It will be the first time the tournament will not be staged during the summer – kicking off on November 21 and running for just 28 days through to December 18.

All eight venues are situated with a 21-mile radius of central Doha and will be linked by a metro and tram system, making it possible to watch more than one game in the same day.

The tournament organisers are confident all of the stadiums and other infrastructure will be finished in good time.

The futuristic design of the Al Wakrah Stadium is inspired by the sails of the dhow boats traditional to the country of Qatar in a nod to the coastal city’s maritime heritage.

It boasts a retractable roof and an innovative cooling system to ensure the ground can hold events all year round, even during the searing heat of the summer months.

The structure of the stadium is now complete and work has begun on installing the roof and internal touches. The energy centre to power the stadium has been completed. 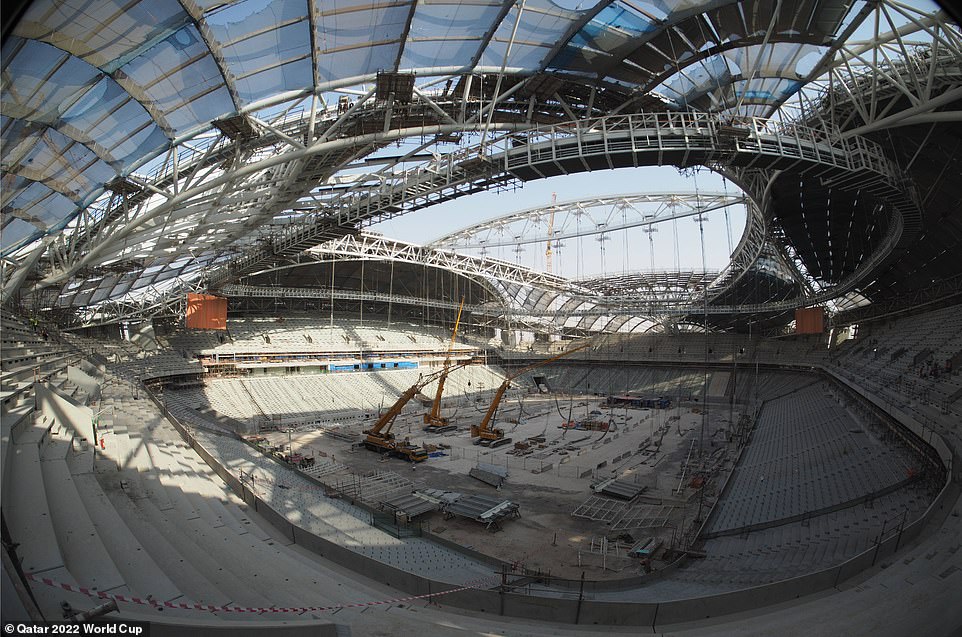 The structure of the stadium is taking shape nicely, with construction work continuing on the roof and internal elements 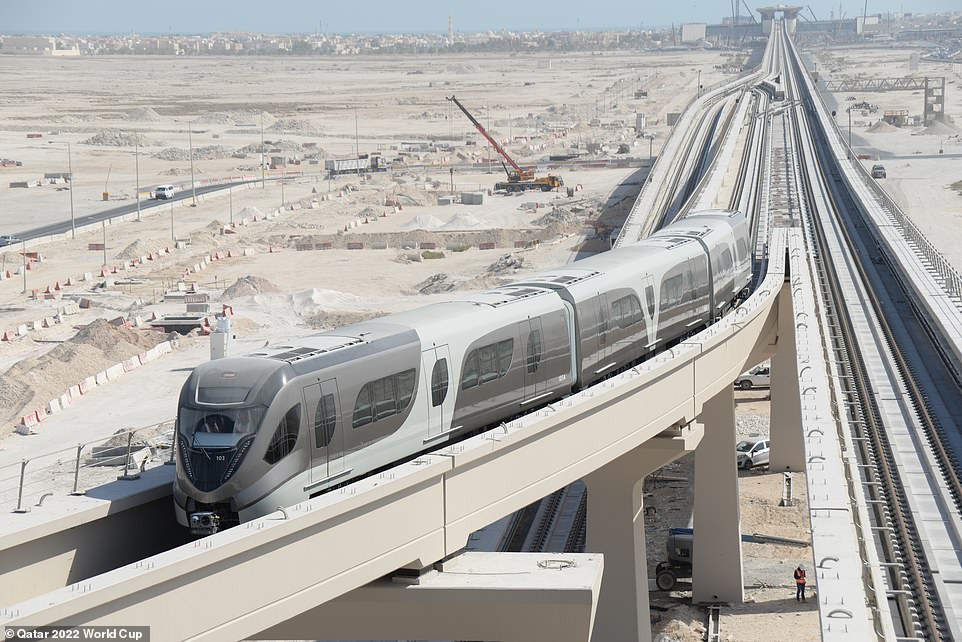 A state-of-the-art metro system will zip supporters from one stadium to another, allowing them to watch several games

One of the larger stadiums, the Al Bayt will stage matches right through to the semi-finals of the competition.

The arena, which is being delivered by the Aspire Zone Foundation, is designed to represent Arab hospitality with the structure looking like a traditional Arab tent known as ‘bayt al sha’ar’.

Because temperatures in Qatar can top 30C even in November, it will also have a retractable roof to keep out the heat.

Again, the structure of the stadium has been finished already and the retractable roof installed, making it well ahead of schedule. The ground is currently being landscaped. 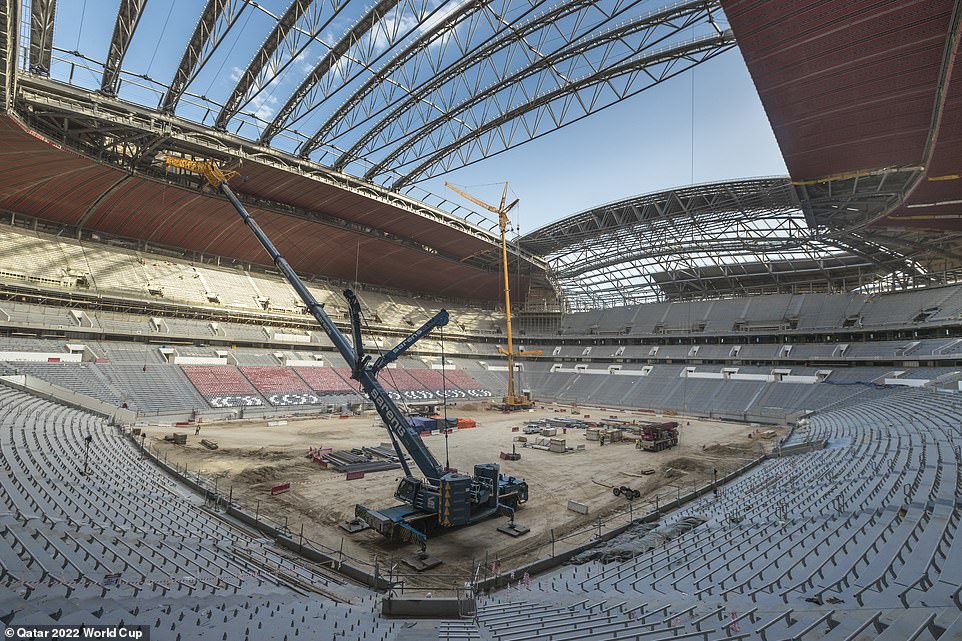 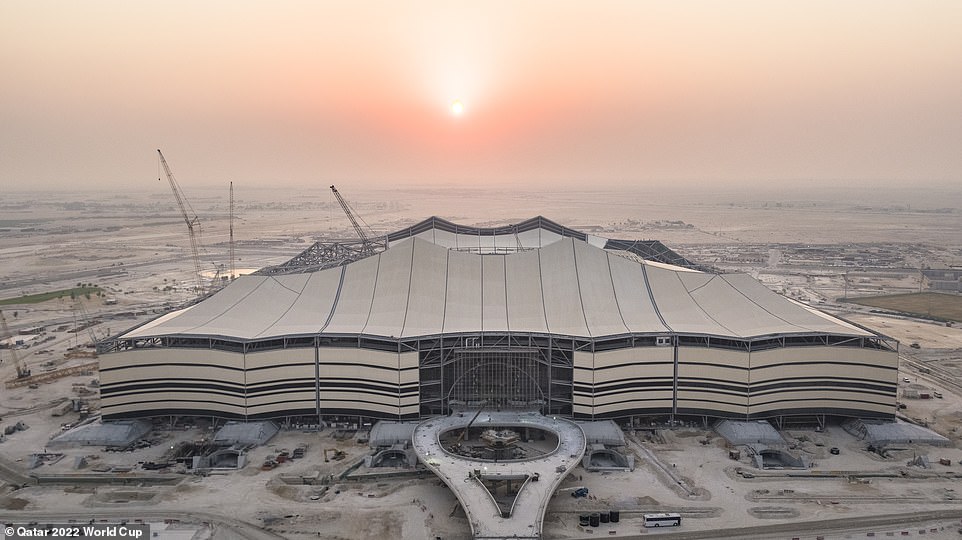 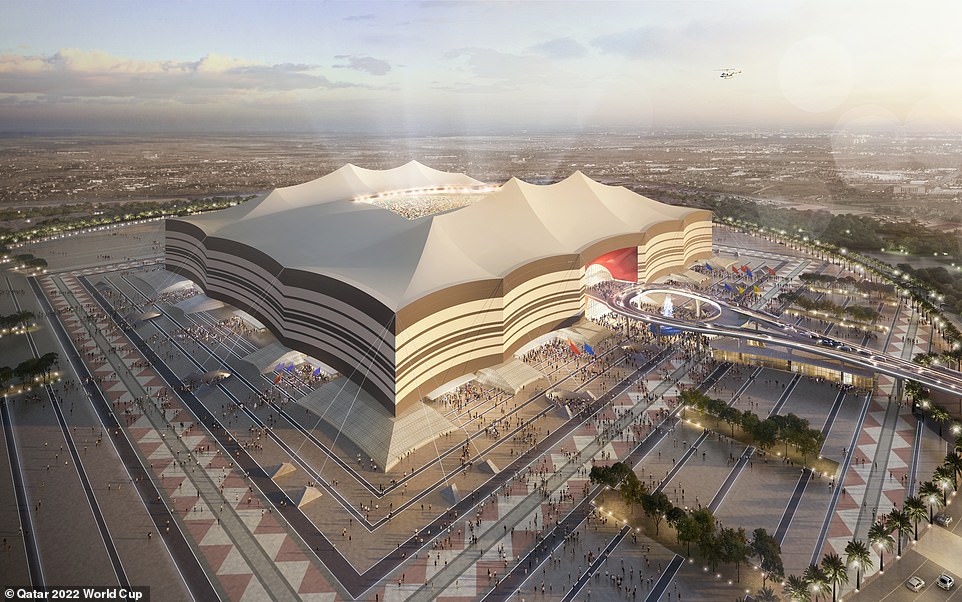 This stadium, which will host games up until the quarter-final stage, is meant to be a reflection of Qatari culture.

The facade will feature intricate patterns representing the country of Qatar, from its wildlife to its history of trade.

Al Rayyan is in proximity to the desert, so the hospitality areas and merchandise stalls outside the ground will be shaped to resemble sand dunes.

The aforementioned facade has been started while the glass roof is also on and the power station is being tested. 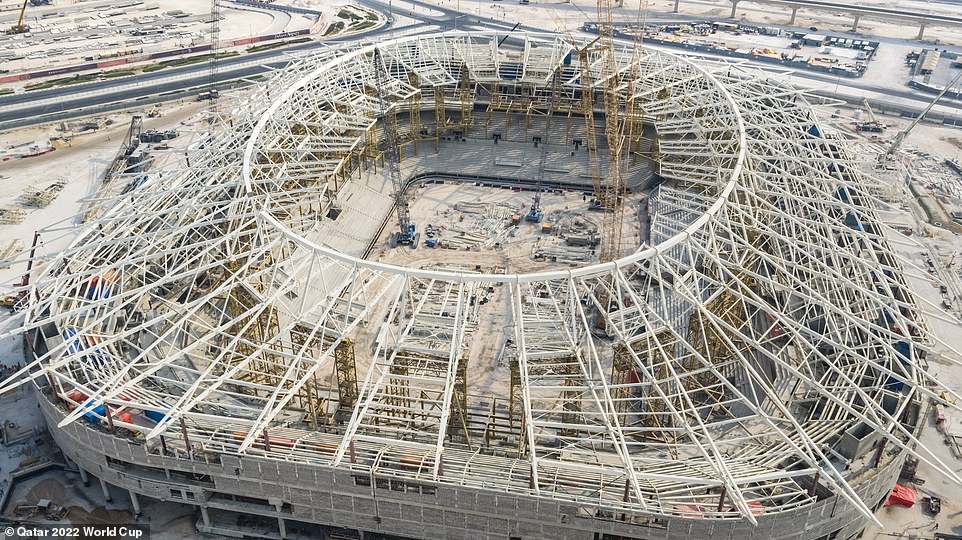 The latest progress on the Al Rayyan Stadium in Qatar, which will have a capacity of 40,000 and reflects local culture 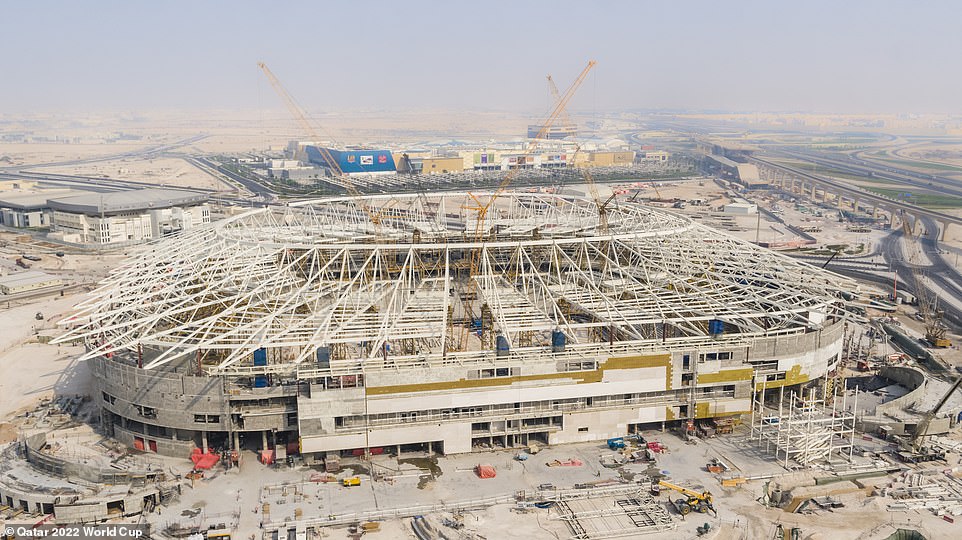 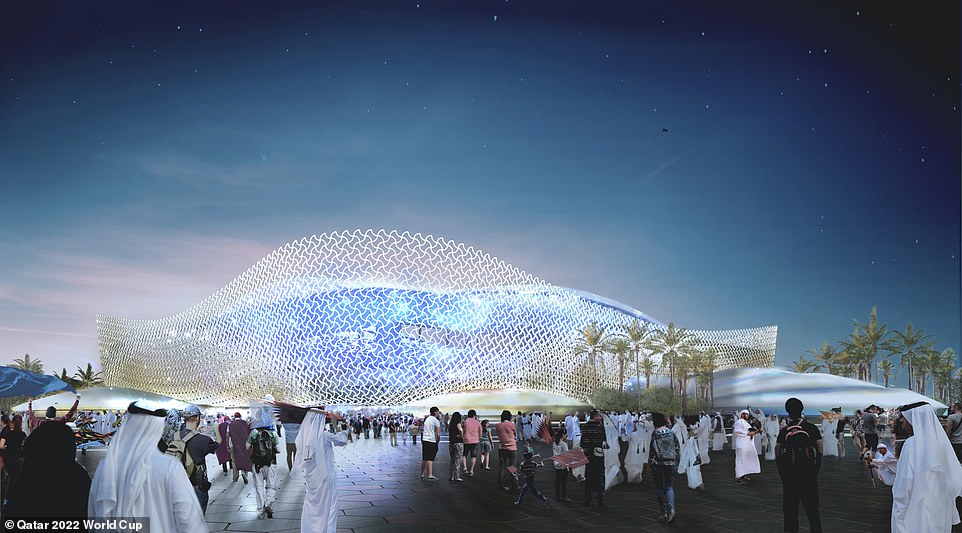 The Al Rayyan stadium will certainly look impressive as fans approach it, especially for matches held at night 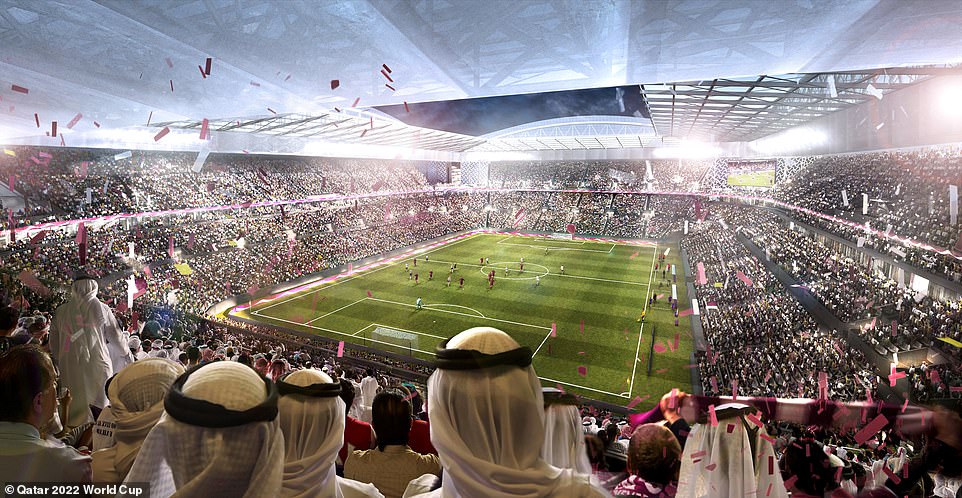 Good progress is being made with the stadium construction, with the facade designs underway and the roof assembled

This stadium is right inside the Qatar Foundation just outside the centre of Doha and which is well known around the world.

Hosting matches through to the quarter-finals, the Education City Stadium is set to become the home of the national women’s team after the world Cup.

The stadium takes the shape of a diamond and will be nicknamed ‘the diamond in the desert’ as it is designed to glisten by day and glow at night.

This shimmering facade is almost done and the roof will be the next to go on. 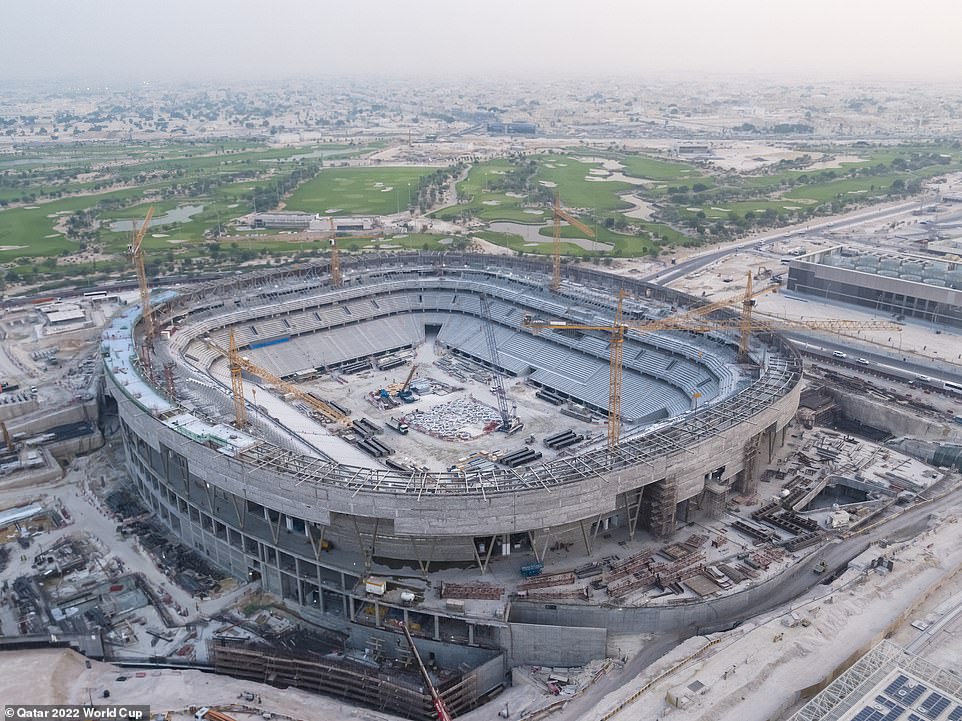 The Education City Stadium is taking shape – it is just seven miles from the centre of Doha and will have a 40,000 capacity 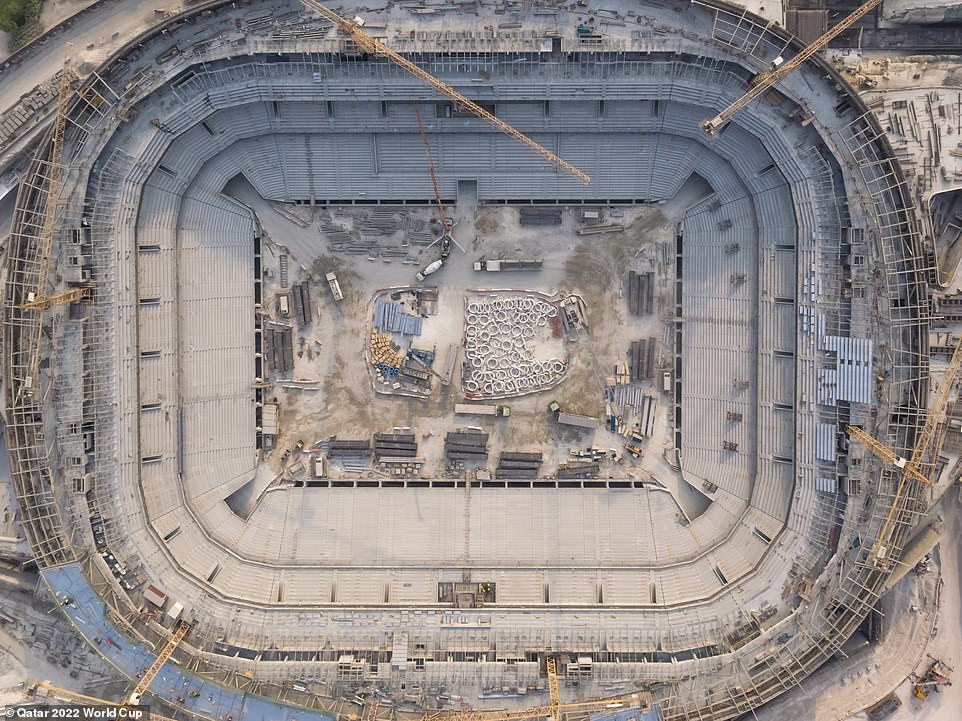 With the nickname ‘diamond in the desert’, the Education City Stadium will glisten in the day and be illuminated at night

This one is inspired by the ‘gahfiya’, a traditional woven cap worn by men across the Middle East, and it’s easy to see in pictures of the stadium.

This is the first World Cup venue to be designed by a Qatari architect, Ibrahim Al Jaidah.

The organisers say 80 per cent of the stadiums concrete frame has been completed with the steel structure of the upper tier ongoing.

Outside the ground, work on the training pitches and water supply is ongoing. 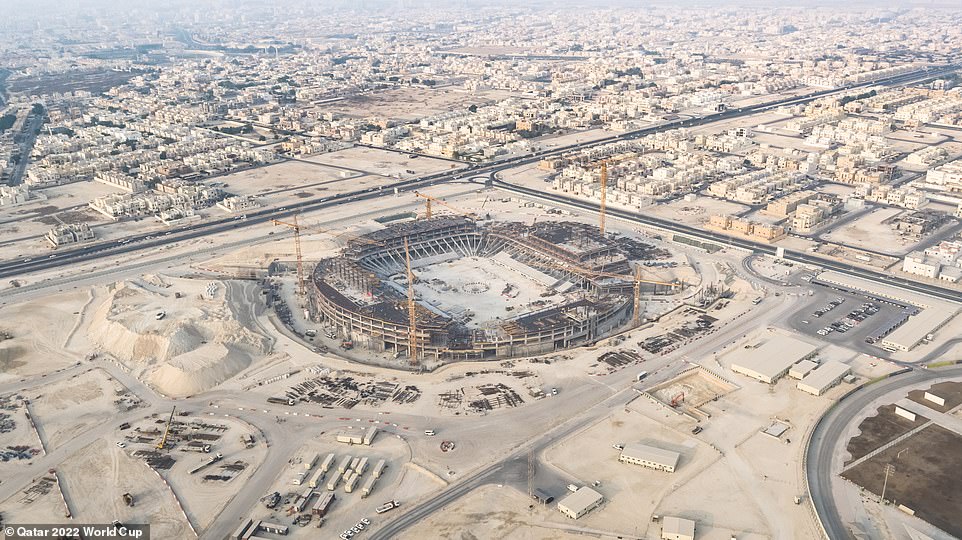 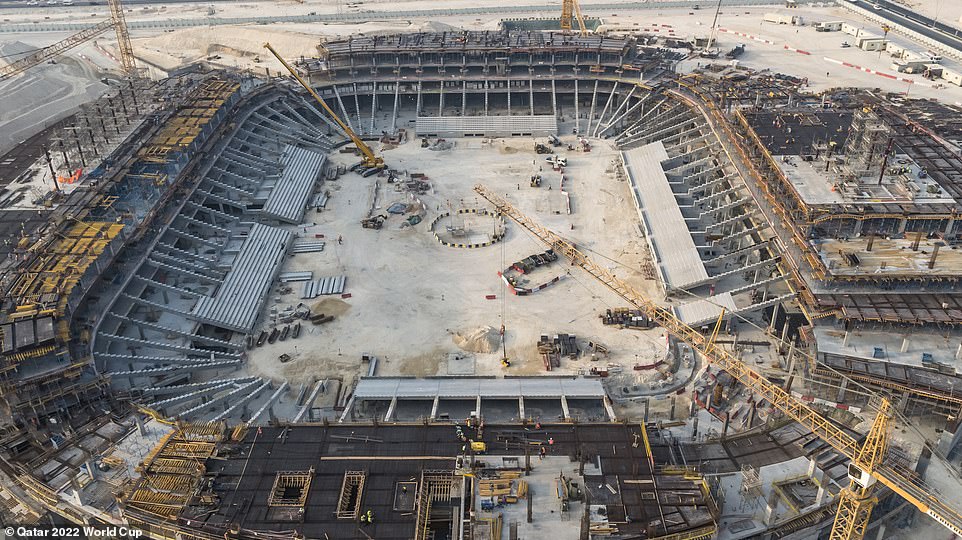 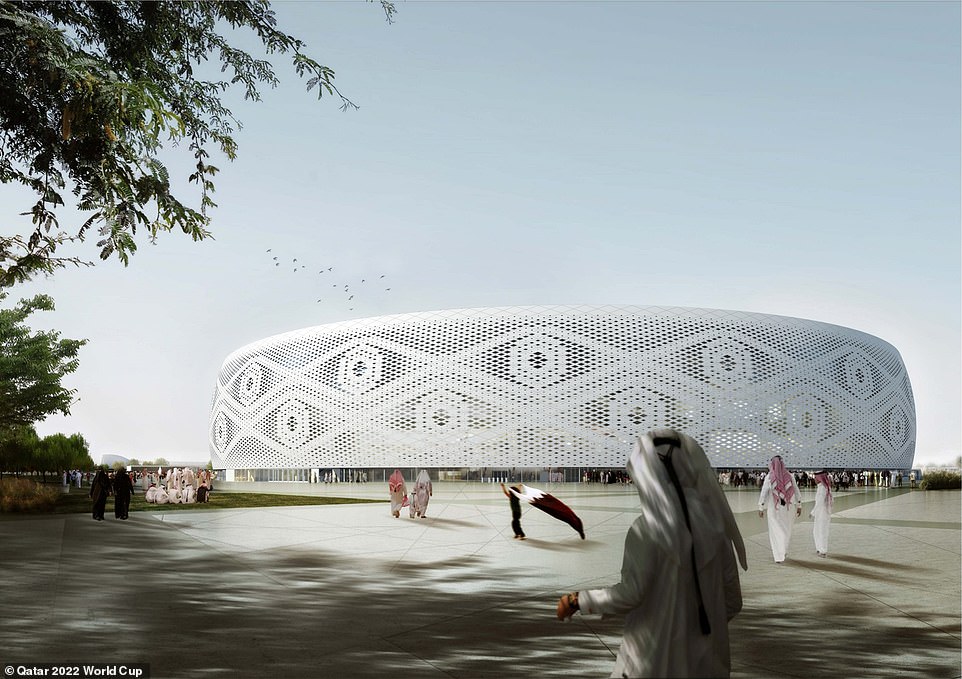 The design of the stadium is inspired by the ‘gahfiya’, a traditional woven cap worn by men across the Middle East 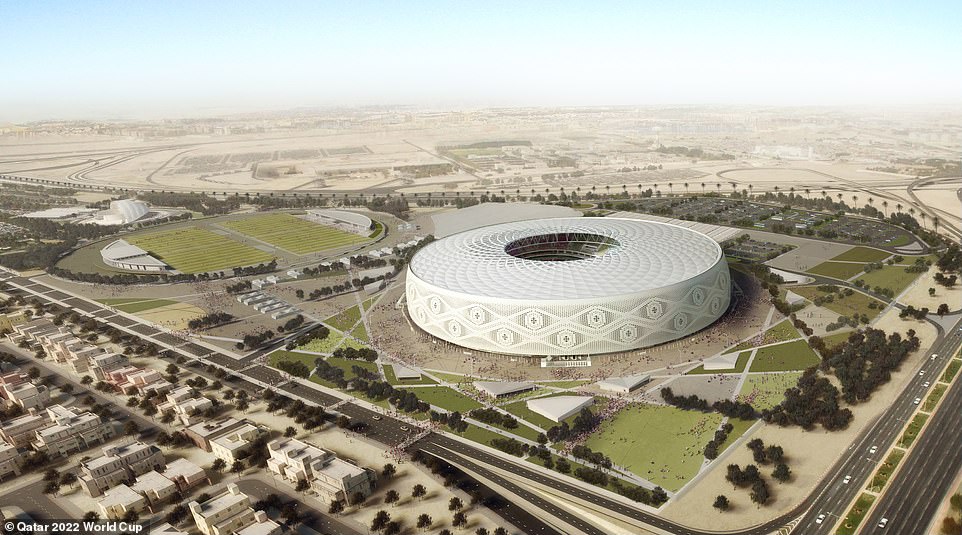 In a first for the World Cup, this stadium has been made from 998 shipping containers and other materials that can easily be dismantled after the tournament finishes.

It overlooks the Doha Corniche and the skyline of the West Bay – a waterfront promenade that looks spectacular at night – and will stage games up to the quarter-finals.

The prefabricated containers have been under construction for a few months with the first of the 998 expected to arrive in Doha in February 2019.

The aim is to use as few materials as possible and thereby reduce waste and emissions. 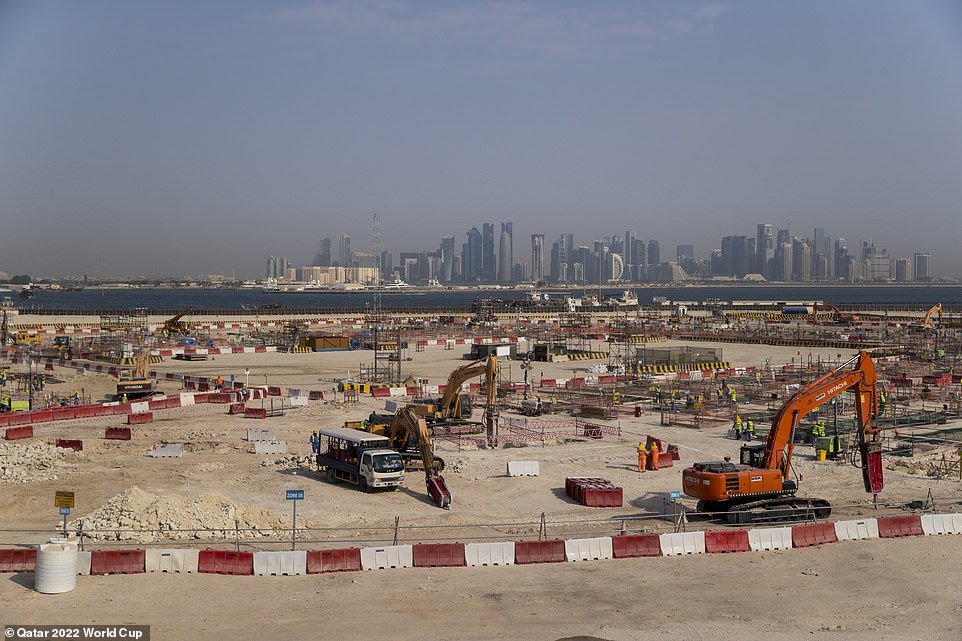 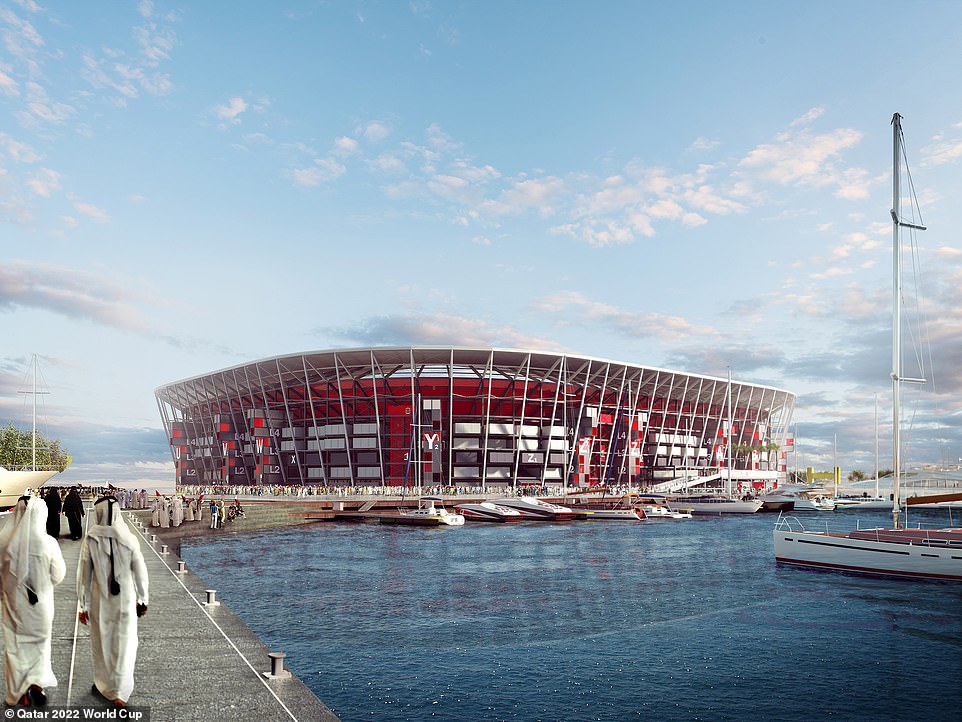 Anyone with a yacht will be able to moor right next to this stadium, which is situated a mere six miles from central Doha 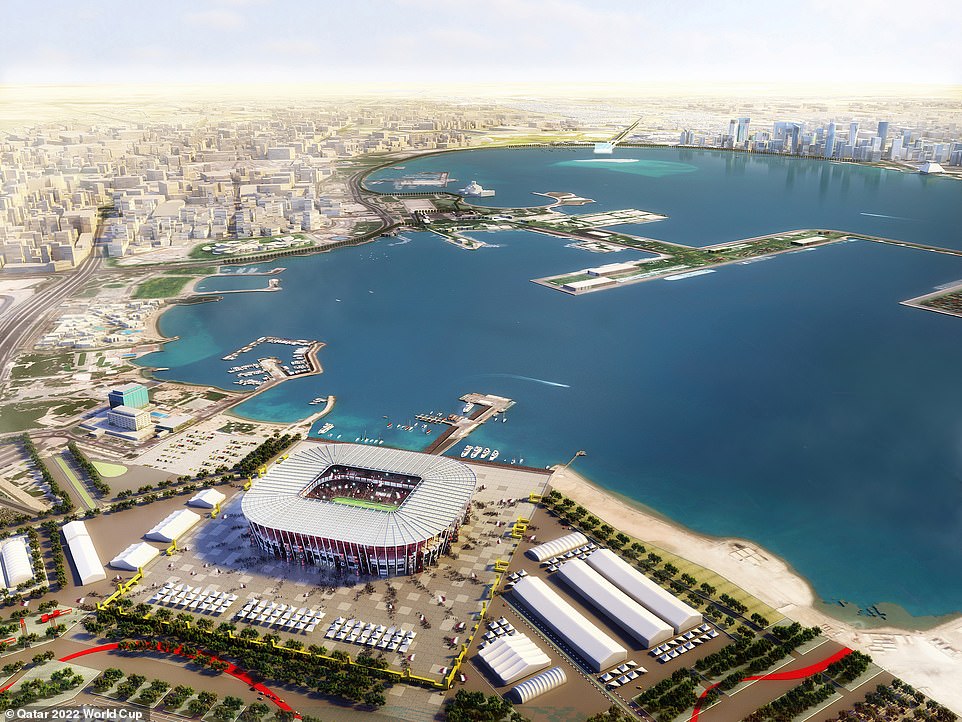 The showpiece stadium for the tournament that will host the opening fixture and the final as well as other key matches.

The design for the Lusail hasn’t yet been unveiled – a reveal of that is coming next month.

However, preparatory work is already underway with 24 main structural columns to support the stadium facade plus the concrete superstructure progressing.

With the stadium 80m tall at its highest point, there is plenty to be done from here. 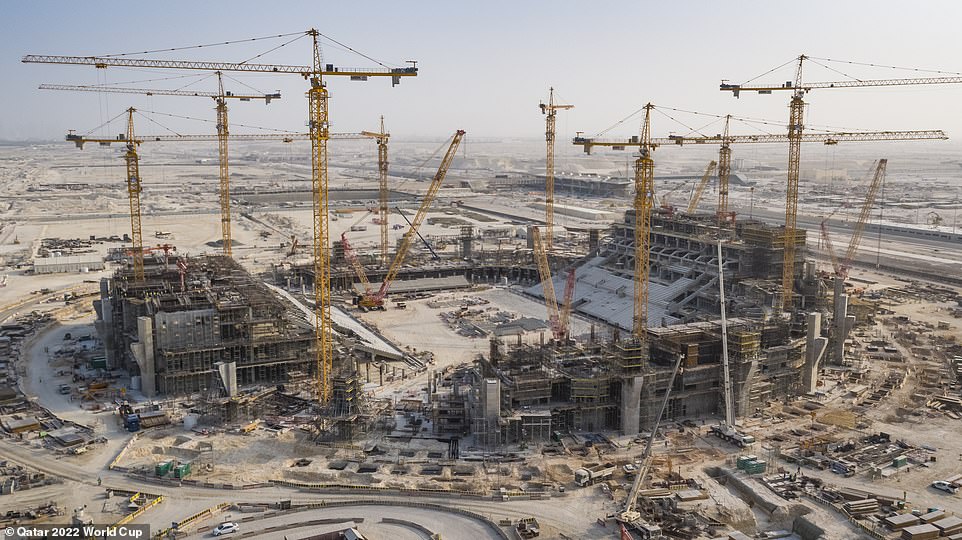 Work continues apace on the Lusail Stadium, though the final design of the showpiece venue hasn’t yet been revealed 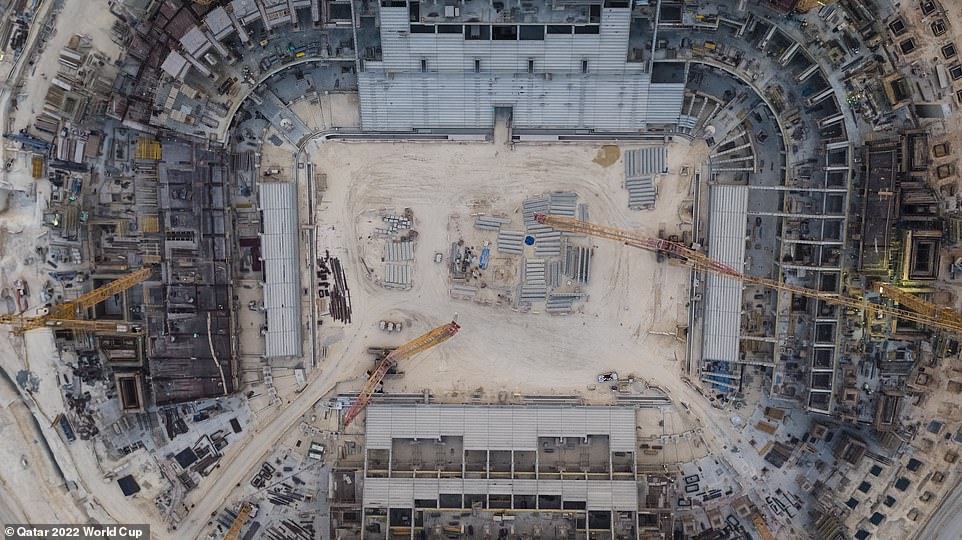 With capacity for 80,000 spectators, the opening match and the final will be staged here in four years’ time

This one is already open having hosted the Emir Cup final in May last year in front of 40,000 spectators.

The country’s national stadium had been open since 1976 and has been extensively renovated to host the World Cup.

It has previously hosted the Asian Games, the Gulf Cup and the AFC Asian Cup and next year will welcome the IAAF World Athletics Championships.

England played Brazil here in an international friendly back in 2009. 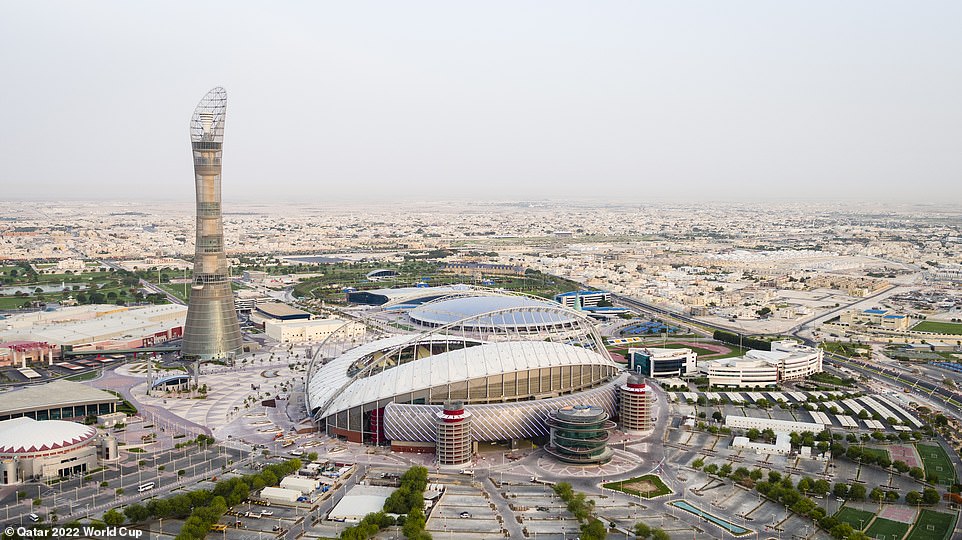 The revamped 40,000-seater venue was opened for the Emir Cup final last year and will host several showpiece events