Quantum teleportation is achieved for the first time: Austrian and Chinese scientists teleport ‘quantum states’ from one photon to another after first theorizing about it in the 1990s

International researchers have successfully teleported ‘quantum states’ from one photon to another, in a pioneering breakthrough that may lead to a more secure way of transmitting data.

The experiment did not involve teleporting actual matter, which remains only possible in science fiction.

However, the successful teleportation is expected to further the development of a future, more secure quantum internet, since scientists will now be able to transport larger amounts of complex information, with less vulnerability to hackers on so-called ‘quantum computers.’

A pioneering experiment teleported ‘quantum states’ from one photon, or light particle, to another (above), 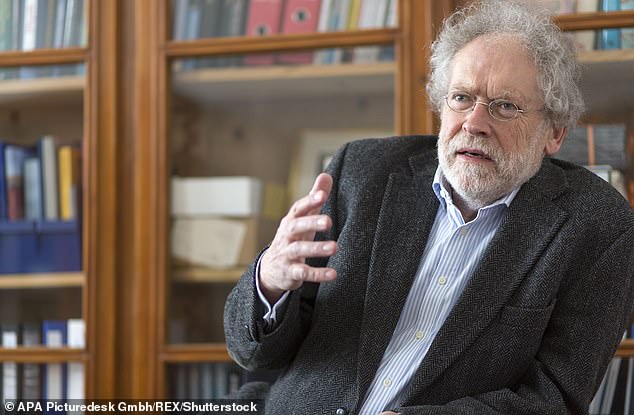 ‘This result could help to connect quantum computers with information capacities beyond qubits’, says quantum physicist Anton Zeilinger (above), one of the researchers who worked on the breakthrough experiment

Quantum state: This is the characteristic of a micro-sized object, which includes particles of light known as photons

Qubits: The are small bits of quantum information that exist in two places at one time. They are the most basic pieces of data that scientists have been able to move between micro particles

Quitrit: larger, more complex pieces of data that exists in three dimensions. The teleportation of this type of information is expected to help create a more secure, quantum internet that is less vulnerable to hackers.

Information in the physical world is delivered by books, televisions, computers and other devices, while tiny units of matter such as photons, or particles of light, take care of the job in the quantum world.

Until now, scientists have only been able to teleport small bits of quantum information, or ‘qubits,’ which can exist in two places at one time.

This is the same way ‘bits’ transmit information in today’s computers, alternating between the numbers 0 and 1.

However, researchers had theorized since the 1990s that quantum teleportation was capable of much more.

Using a ‘multiport beam splitter’ that directs photons through several inputs and outputs, the Austrian and Chinese researchers were able to prove this theory and transported a three-dimensional quantum state, or a ‘quitrit’ of complex data.

‘This result could help to connect quantum computers with information capacities beyond qubits’, says quantum physicist Anton Zeilinger, one of the researchers, in a released statement.

The Chinese scientists said they already have their sights set on ‘multidimensional quantum teleportation.’

‘The basics for the next-generation quantum network systems is built on our foundational research today”, said Chinese researcher Jian-Wei Pan.

The scientists first reported the breakthrough in the journal Physical Review Letters.

WHAT IS A QUANTUM COMPUTER AND HOW DOES IT WORK?

The key to a quantum computer is its ability to operate on the basis of a circuit not only being ‘on’ or ‘off’, but occupying a state that is both ‘on’ and ‘off’ at the same time.

While this may seem strange, it’s down to the laws of quantum mechanics, which govern the behaviour of the particles which make up an atom.

At this micro scale, matter acts in ways that would be impossible at the macro scale of the universe we live in.

Quantum mechanics allows these extremely small particles to exist in multiple states, known as ‘superposition’, until they are either seen or interfered with.

A scanning tunneling microscope shows a quantum bit from a phosphorus atom precisely positioned in silicon. Scientists have discovered how to make the qubits ‘talk to one another

A good analogy is that of a coin spinning in the air. It cannot be said to be either a ‘heads’ or ‘tails’ until it lands.

The heart of modern computing is binary code, which has served computers for decades.

While a classical computer has ‘bits’ made up of zeros and ones, a quantum computer has ‘qubits’ which can take on the value of zero or one, or even both simultaneously.

One of the major stumbling blocks for the development of quantum computers has been demonstrating they can beat classical computers.

Google, IBM, and Intel are among companies competing to achieve this. 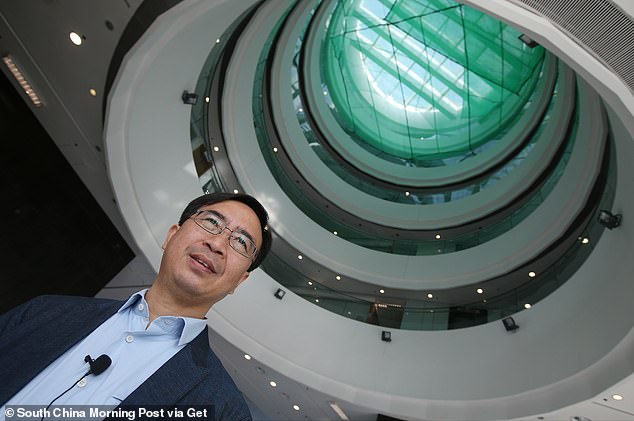 ‘The basics for the next-generation quantum network systems is built on our foundational research,’ says Chinese researcher Jian-Wei Pan (above)