Grant Shapps today warned of potentially huge check-in queues at airports after he announced double-jabbed holidaymakers will be able to visit ‘amber list’ countries without the need to quarantine on return.

The Transport Secretary confirmed that the self-isolation rules are being waived for the fully-vaccinated from so-called ‘Freedom Day’, in a boost for the stricken travel industry and Brits desperate to get away.

Children will also be exempted allowing families a far wider range of options for going abroad, and ex-pats will benefit from the change as long as they were jabbed in the UK. It means that for those who have received both doses the amber and green list rules are essentially the same.

However, the requirement to get tests after two days after coming back will stay in place with ministers arguing it provides crucial genomic sequencing to detect dangerous variants. The rule for England could add hundreds of pounds to the cost of holidays for families, as children will need to have the screening too.

And Mr Shapps admitted that the red tape to check whether people can be excused quarantine could cause major backlogs when they come back to the UK – saying it is only ‘fair’ to be honest about the prospect.

Meanwhile, sun-seekers could also find themselves hampered as many countries still have tough restrictions on Britons visiting amid concern about the Indian variant.

Holiday firms have been gearing up for a bookings surge with quarantine-free trips unlocked for millions of families to more than 130 countries – including the US, Thailand and most European countries. 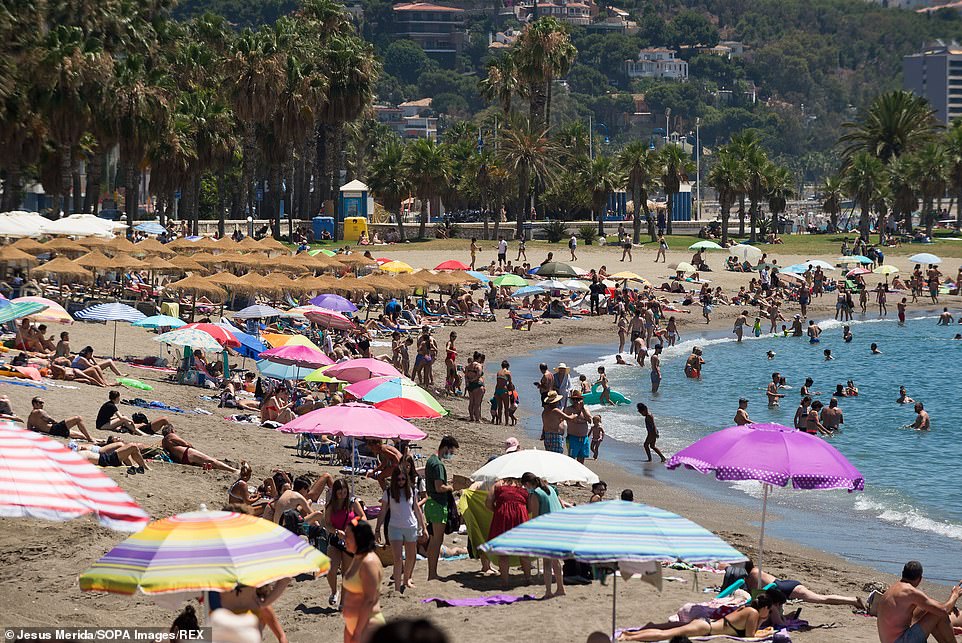 Quarantine-free holidays are set to be unlocked for millions of families to more than 130 countries – including the US, Thailand and Spain (pictured, Malaga) 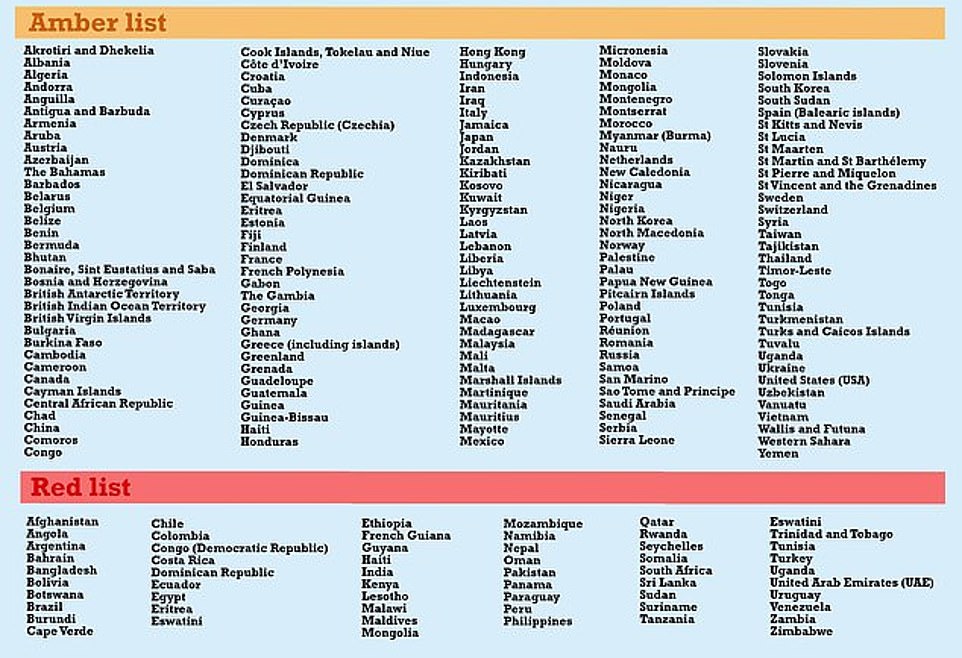 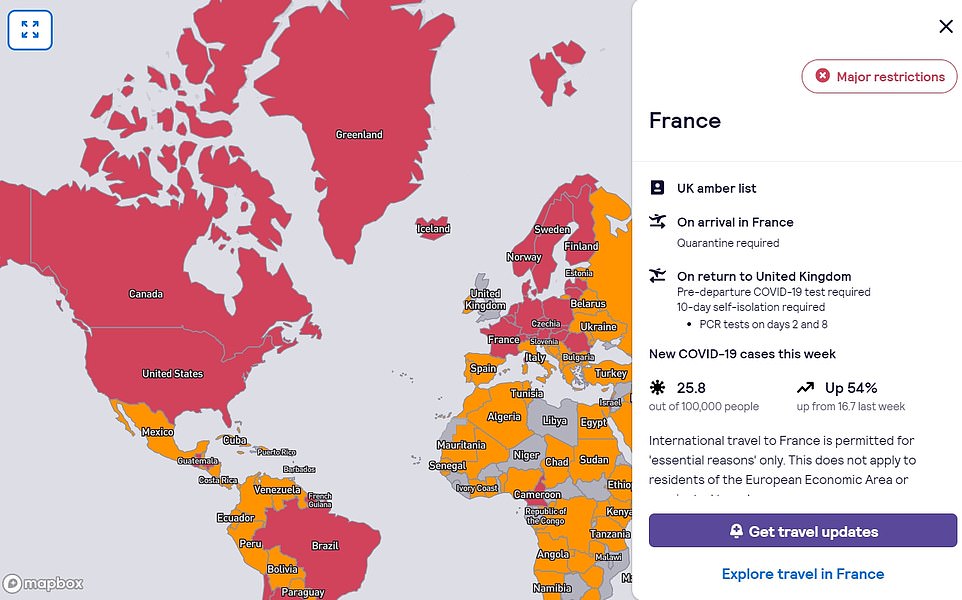 What restrictions do other countries have on Britons visiting?

Travellers who can prove they are fully vaccinated do not need an essential reason to travel to France and do not need to self-isolate on arrival.

Britons aged 12 or over must have either proof of a negative test 48 hours prior to arrival, or proof of being fully vaccinated at least 14 days beforehand.

Anyone aged six or over who has been in the UK in the previous 14 days must present a negative test result from the past 48 hours.

They must also self-isolate for five days and take another test at the end of the period.

Those arriving without a negative test will need to self-isolate for 10 days and then have a test.

Travellers from the UK can avoid quarantine requirements if they have proof of a negative PCR test up to 72 hours before arrival, a rapid antigen test within 48 hours, or that they have received two vaccine jabs at least 14 days earlier.

It is also acceptable to show evidence of having recovered from coronavirus – such as a positive test from months earlier.

All travellers, apart from children under 12, must have proof of a negative COVID-19 test to travel to or through mainland Portugal.

If you have travelled from the UK to mainland Portugal, you must quarantine for 14 days in the place you are staying.

But this requirement is waived if people can show they are fully vaccinated, and children travelling with a vaccinated adult are exempt from quarantine.

In Madeira and Porto Santo tests are not required for people who are fully vaccinated.

Fully vaccinated Britons are exempt from quarantine, but must do a pre-departure digital registration.

Unvaccinated children under 12 years of age are allowed to enter Germany if they present proof of a negative test result and travel with at least one fully vaccinated parent.

Since 16 March 2020, it is not possible for most British nationals to enter the US if they have been in the UK, Ireland, Schengen zone, Iran, Brazil, or China within the previous 14 days.

As it stands, travellers returning from these destinations must quarantine for up to ten days – regardless of whether they are vaccinated or not.

Only travellers returning from a small list of green countries can avoid quarantine.

Mr Shapps told the Commons: ‘I can confirm today that from the 19th of July, UK residents who are fully vaccinated through the UK vaccine rollout will no longer have to self-isolate when they return to England.

‘In essence, this means that for fully vaccinated travellers the requirements for green and amber list countries are the same.

‘To be clear, a full vaccination means 14 days have passed since your final dose of the vaccine, and it’s also important to note that health matters are devolved, so decision-making and implementation may differ across the UK administrations and we’ll continue to work with the devolved administrations to ensure we achieve our shared objectives of safe, sustainable and robust return to international travel.’

Mr Shapps said the changes he had announced would ‘prioritise those vaccinated in the United Kingdom’ – but suggested that foreign tourists coming to England could soon benefit from the same treatment.

‘We want to welcome international visitors back to the UK and are working to extend our approach to vaccinated passengers from important markets and holiday destinations later this summer, such as the United States and the EU,’ he said.

Mr Shapps said he would update MPs in ‘due course’ on the issue.

Former PM Theresa May urged Mr Shapps to take action to make sure that travellers did not face massive queues due to Covid red tape.

He said ‘a lot of investment’ was going into minimising the issues – but admitted there is likely to be longer waits.

‘I have been working with the Home Secretary and Border force on exactly this issue,’ he said.

‘I should be perhaps a little but more specific about where travellers might expect queues. Quite a lot of the checking will be done upstream, in other words before you board the aircraft typically, or it could be a train or a boat, from your location you are coming back from.

‘The queues at check in whilst you are abroad may in fact bye the place where those problems most exist.

‘I know that many of the airlines are developing systems to further automate that check-in but they will be doing quite a complicated job – checking the passenger locator form against the booked test still required on day two and of course vaccine status as well.

‘So I just think it is fair to warn people who are travelling this summer that is something we haven’t had to do before.’

The news was warmly welcomed by the travel industry. British Airways chief executive Sean Doyle said: ‘We’re pleased to see this common sense approach which is already working safely for many other countries, but there is more work to do.

‘While the quarantine requirement for amber countries is being lifted for fully vaccinated UK travellers, the government needs to quickly extend this to all vaccinated travellers, agree a reciprocal deal with the US, add more countries to the green list and reduce the need for unnecessary, expensive tests.’

Amid growing speculation in recent days, comparison site TravelSupermarket said more than half of all new bookings were for the last week of July or first week of August – up from 10 per cent a fortnight ago.

Meanwhile 62 per cent of all package holiday searches are for July/August, up 20 per cent on last month.

British Airways said searches for holidays to amber list countries on its website yesterday were up 45 per cent compared with the same day last week.  And Jet2 said it had seen ‘enormous demand’ for flights.

Martin Nolan, of booking site Skyscanner, said: ‘It is clear that people are aching to be able to travel again… as evidenced by the immediate uptick in searches and bookings.’

Paul Charles, CEO of The PC Agency, a travel consultancy, said firms were racing to bring staff back off furlough to handle the expected surge in bookings.

He said: ‘My advice is for people to lock in tomorrow on the deals they see before there’s an announcement because prices will rise when demand spikes.

‘I think we will see a lot of last-minute bookings for trips at short notice. Families will confirm some trips but then you will get a lot of couples that are fully-jabbed.

‘I think there will be a rush to the border by the double-jabbed over-40s and the silver generation.

‘The pent up demands is enormous. There will be a lot of trips to long-distance, more exotic locations. But Spain, France and Portugal will also all do really well.’

He added: ‘One issue is resources and whether firms have the staff and capacity to deliver it.

What countries are on the ‘amber list’ for travel?

Portugal (including the Azores) Madeira is on the green watchlist.

Spain (including the Canary Islands) The Balearic islands are on the green watchlist.

St Vincent and the Grenadines

‘I know some travel firms that are bringing people back from furlough to cope with the expected increase in demand.’

Under the revamped rules, the ‘do not travel’ advice will be dropped and vaccinated UK residents will be allowed to travel home from amber countries without the need to quarantine.

Children, who are not eligible for vaccination, will be exempted from self-isolation if they are travelling with family.

But they will have to take additional tests. According to the Telegraph, Mr Shapps has told the industry: ‘Day-two testing will remain for arrivals from amber countries, regardless of vaccinated status, as this pro vides genomic sequencing capability to identify the risk of importing variants.’

Those who have not received both vaccines will still have to quarantine when they arrive in the UK or face a £10,000 fine.

The change will make no difference to red list countries such as India, Turkey and Brazil.

Anyone returning from a red list country must quarantine in an approved hotel at a cost of £1,750 each. 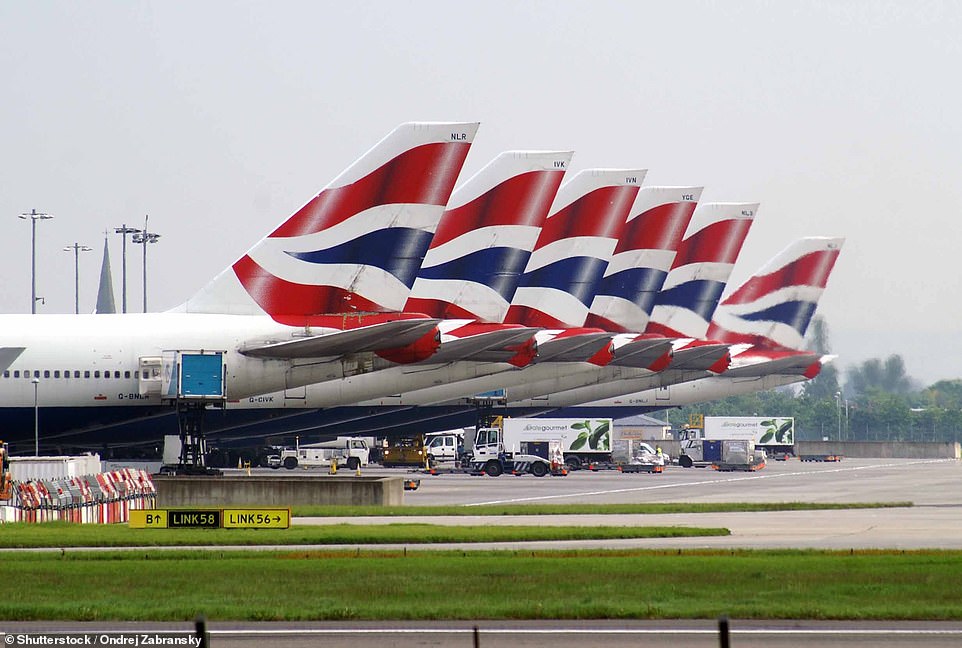