Ministers are poised to slash quarantine to 10 days to salvage summer getaways for millions of families whose trips abroad were hanging in the balance last night.

The government fears its sudden decision to force Britons returning from Spain to self-isolate for 14 days will spook mass cancellations and kill the holiday season.

Tourists braced to enter quarantine are worried the two weeks at home could cost them earnings and even their jobs, particularly for those whose cannot work from home.

Shaving four days off the two-week quarantine is hoped to persuade those who are grappling with whether or not to fly to press ahead with their journey.

The additional two days is a buffer in case any symptoms arise, according to the Daily Telegraph which first revealed the reduction. 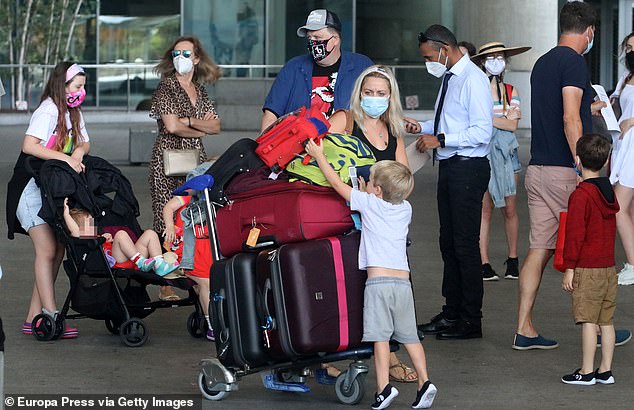 Britons arrive at the Malaga-Costa del Sol Airport, and face quarantine on their return to the UK

The Transport Secretary, whose wife and children will continue their holiday without him, will have to quarantine at home for two weeks.

He told the Mail he ‘didn’t feel right’ continuing his holiday when others were having their plans wrecked.

Cabinet Office minister Michael Gove cancelled a trip to the Balearics on Saturday.

Ministers were last night facing a backlash from travel experts and the airline industry over the ‘chaotic’ handling of the air bridges policy, which has been in place for only three weeks.

The Spanish government, international airline bosses, holidaymakers and travel firms said Britain had got it wrong on safety, science and economic impact.

But a government source said: ‘This was always a safety first policy. If we think there is a risk we will end up importing cases from overseas then we will act decisively to prevent it.’

The change in advice came as:

The Government shocked the nation and travel industry at the weekend with new advice against all but essential travel to mainland Spain. 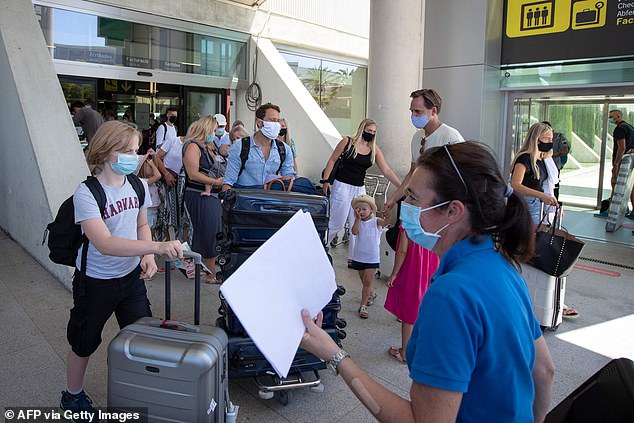 At the same time, it said anyone returning from there should go into a 14-day home quarantine. Breaking quarantine risks a £1,000 fine.

The decision was taken amid fears of a second wave of Covid in Spain after case numbers rose by 75 per cent in just 48 hours last week.

The rate of infection in Spain is 35.1 cases per 100,000 people, while the UK is at 14, according to the latest figures from the European Centre for Disease Prevention and Control.

The Balearic and Canary islands were included in the quarantine restrictions but excluded from Foreign Office warning against ‘all but essential travel.’

The omission had led to hopes yesterday that the islands, where coronavirus cases are said to be lower, might be lifted out of the restrictions altogether, following intense lobbying from Spain.

Those hopes were dashed last night by the latest Foreign Office advice.

A Foreign Office spokesman said: ‘We have considered the overall situation for British nationals travelling to and from the Balearic and Canary Islands, including the impact of the requirement to self-isolate on return to the UK, and concluded that we should advise British nationals against all non-essential travel to the whole of Spain.’

It was claimed last night that the Chief Medical Officer had warned that ten Britons who had tested positive for coronavirus since July 1 had reported visiting Spain in the 14 days before their test.

Where next for quarantine? Travel firms on the brink as Britons pull out of trips all over Europe

By Sean Poulter and James Tozer for the Daily Mail

British holidaymakers are cancelling trips across Europe amid fears that snap travel bans and quarantine rules will be imposed.

Warnings from ministers that they could extend new controls on travelling to Spain to other nations has sent a shiver through the travel industry.

Both Foreign Secretary Dominic Raab and Health Minister Helen Whately have flagged the possibility that travel bans could be widened. It has been suggested that France, Belgium and Germany might join Portugal on the list of countries with restrictions.

Downing Street last night warned tourists ‘no travel is risk-free’ as the prospect of the Canary Islands and the Balearics being exempted from the quarantine ruling on Spain dwindled.

Britons in quarantine may have to sign on for benefits

Holidaymakers returning from Spain may have to sign on for benefits if their employer will not pay them to quarantine, Downing Street said yesterday.

The sudden change in travel guidance for Spain at the weekend means hundreds of thousands of British holidaymakers currently in Spain will have to self-isolate at home for 14 days when they return.

Under the regulations they risk a £1,000 fine if they leave their home during this period.

People asked to self-isolate after coming into contact with an infected person are eligible for statutory sick pay.

But a loophole in the law means those asked to quarantine after returning from holiday are not.

The Prime Minister’s official spokesman said holidaymakers who miss out on pay or work because of the quarantine period may be eligible for Universal Credit or employment support allowance instead.

He said the Government expected employers to be ‘flexible’ in allowing staff to work from home while self-isolating.

The Prime Minister’s official spokesman added: ‘Anyone travelling abroad should be aware that our travel advice is under constant review.’

It came as tour operator Jet2 said it was calling off flights to Spanish destinations, along with Faro airport in the Algarve.

It demanded ‘clarity’ from the Government during this ‘fast-moving situation’.

Industry expert Paul Charles, of public relations firm the PC Agency and a member of the Quash Quarantine pressure group, said the decision to re-impose restrictions on visits to Spain has ‘almost cancelled the summer season’.

He said: ‘A lot of people are fearful the Government will put quarantine in place for other countries. Companies won’t be able to survive the winter.

‘People are cancelling not just Spain but other short-haul bookings. We’ve heard of lots of cancellations for holidays to France, Italy and Greece.

‘Not getting bookings throughout late summer means that there will be many more job losses in the travel industry and more businesses will go under.’

Former Tory cabinet minister Michael Portillo warned that leaks suggesting France or Germany might be next are causing ‘chaos and a lack of confidence’.

Tim Hawkins, of Manchester Airports Group, said the impact on some holiday firms could be ‘the final nail in the coffin’.

Mrs Whately said: ‘We have to keep the situation under review and I think that is what the public would expect us to do.’

When asked about France and Germany being included, she said: ‘If we see rates going up in a country where at the moment there is no need to quarantine … we would have to take action.’

Health Minister Lord Bethell added: ‘Within individual countries there is no way for us to control intra-country transport, it is therefore very difficult to have a regional exemption list, and that is why we’ve not been able to give exemptions to the Balearics.’

Cabinet Office Minister Michael Gove, who may have to cancel a trip to Ibiza, said: ‘It’s an inconvenience for me but it’s as nothing compared to the importance of putting public health first.’

It is feared Belgium could be the next country to fall off the travel corridor list after drastic social distancing orders were imposed.