In medieval times, King Edward III was so inspired by tales of King Arthur and the chivalry of the Knights of the Round Table that he set up his own group of honourable knights, called the Order of the Garter.

Nearly 700 years later, the Order is the oldest and most senior Order of Chivalry in Britain. The Knights, now both male and female, used to be limited to aristocracy, but today they are chosen from a variety of backgrounds, in recognition for their public service. 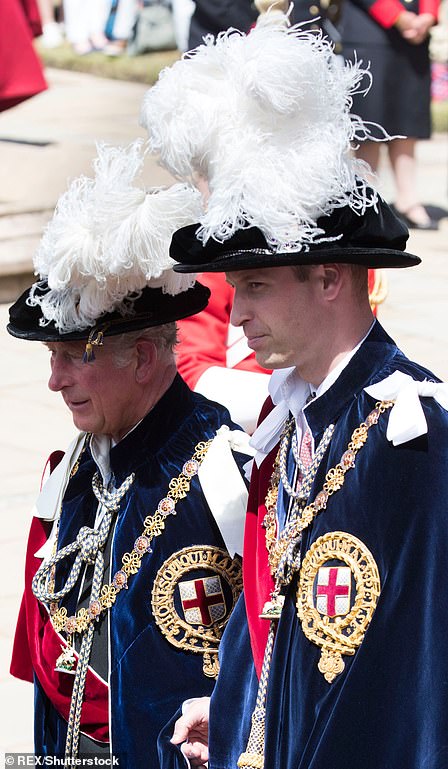 The Order of the Garter is a 700-year-old tradition which recognises great public service. Membership is limited to a maximum of 24 and is usually Lords and Ladies with The Queen, left in 2018, naming members as she sees fit. An ‘extra’ group of members who do not count towards the official limit are Royal Knights, including Prince William, far right last year, while Prince Charles, second right in 2018, is an automatic member as first in line to the throne

The spiritual home of the Order is St George’s Chapel, Windsor. Every knight is required to display a banner of his arms in the Chapel, together with a helmet, crest and sword and an enamelled stallplate.

These ‘achievements’ are taken down on the knight’s death and the insignia are returned to the Sovereign. The stallplates remain as a memorial and these now form one of the finest collections of heraldry in the world.

As sovereign and heir, The Queen and Prince Charles are automatically given membership of the Order and are considered ‘ex officio knights’. The Prince of Wales is known as a Royal Knight Companion of the Garter.

The sovereign, known as the Sovereign of the Garter, is the only one with the power to admit new members.

Field Marshall, the Lord Bramall, a former Chief of the Defence Staff, the Duke of Abercorn, the Duke of Westminster and Baroness Manningham-Buller, the former Director-General of MI5, are among the current Knights and Ladies of the Garter.

There are also two orders of ‘extra’ knights. Members of the Royal Knights and Ladies include Prince Philip, Prince Andrew, Prince Edward, Prince Charles, the Princess Royal and Prince William.

A second order, the Stranger Knights and Ladies, is bestowed on foreign rulers such as Queen Margrethe II of Denmark and Harald V of Norway.

Although new additions are named on St. George’s Day, the 23 April, the initiation ceremony takes place in Junmantle during the traditional Garter Procession, which sees members parade through Windsor.

The annual iconic Garter Day procession, where The Queen and the Knights process in grand velvet robes, glistening insignia and plumed hats, is one of the most traditional ceremonies in the Queen’s calendar.

Every June, a grand procession of the knights takes place at Windsor Castle, accompanied by a marching band and Officers of the Order, all in grand ceremonial dress.

The day begins with The Queen formally investing any new Companions with the Order’s insignia in the Throne Room of the Castle. The Queen and The Duke of Edinburgh entertain the members and officers at a lunch, and then all process on foot to a service in St. George’s Chapel.

There is a short service where any new Companions are installed. The Sovereign and other members of the Order then return to the Upper Ward of the castle in carriages and cars.