Queen Consort Camilla made a sweet nod to the royal family in an official picture shared at the weekend.

King Charles’ wife, 75, was photographed in the Morning Room at Clarence House, on the 64th anniversary of the publication of the first Paddington bear book with several of the Paddington Bear toys left by royal fans in tribute to the late Queen Elizabeth following the announcement of the Monarch’s death on September 8.

It was revealed yesterday that the soft toys will be given ‘good homes,’ just like the ‘real’ Paddington Bear, and are to be donated to vulnerable children supported by the Barnardo’s charity.

After the release of the picture, eagle-eyed fans noted that the Queen Consort had surrounded herself with pictures of the late Queen and the royal family.

One  snap showed the Queen Consort, the King, with the Prince and Princess of Wales, their three children and the Duke and Duchess of Sussex on the occasion of Prince Louis’ christening in 2019.

Another picture  was taken on the occasion of the late sovereign’s Diamond Jubilee in 2012, and showed her in a sparkling gown by the side of her husband the Duke of Edinburgh, who died in 2021.

Queen Consort Camilla, 75, made a sweet nod to the royal family in an official picture shared at the weekend, which were taken in the Morning Room at Clarence House 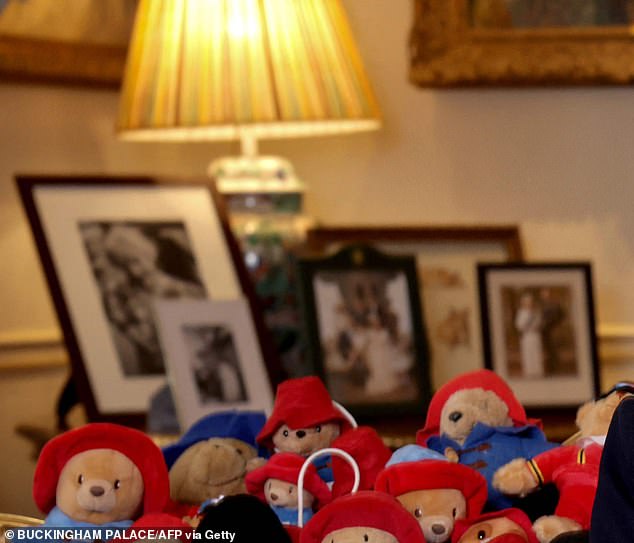 A series of framed pictures of the royal family were seen on show in the corner of the room where the Queen Consort sat for the picture.

Another picture in view was a black and white close-up portrait of the Queen Mother, in a sweet nod to the King’s grandmother, who used to live in Clarence House before he did.

Camilla, who was holding a Paddington Bear on her knees, was beaming in her picture.

Paddington became a totem for the Queen in the days following her death because one of her last public appearances was in the delightful sketch she filmed with him for her Platinum Jubilee. 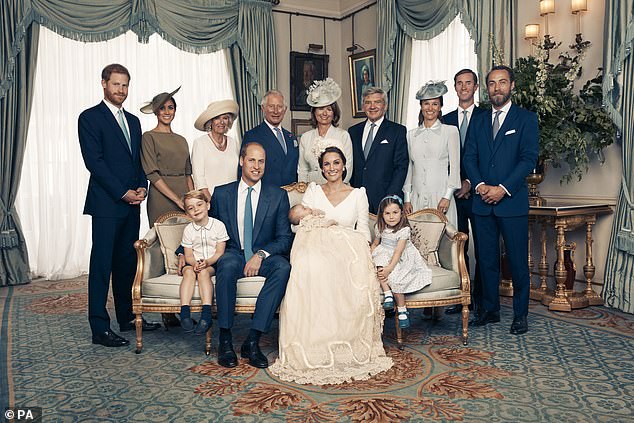 One of the pictures was taken on the occasion of Prince Louis’s christening in 2-19, and shows the Queen Consort with the King, the Prince and Princess of Wales and their children and the Duke and Duchess of Sussex. Carole and Michael, as well as James Middleton were present, as well as Kate sister’s Pippa and her husband Mr James Matthews 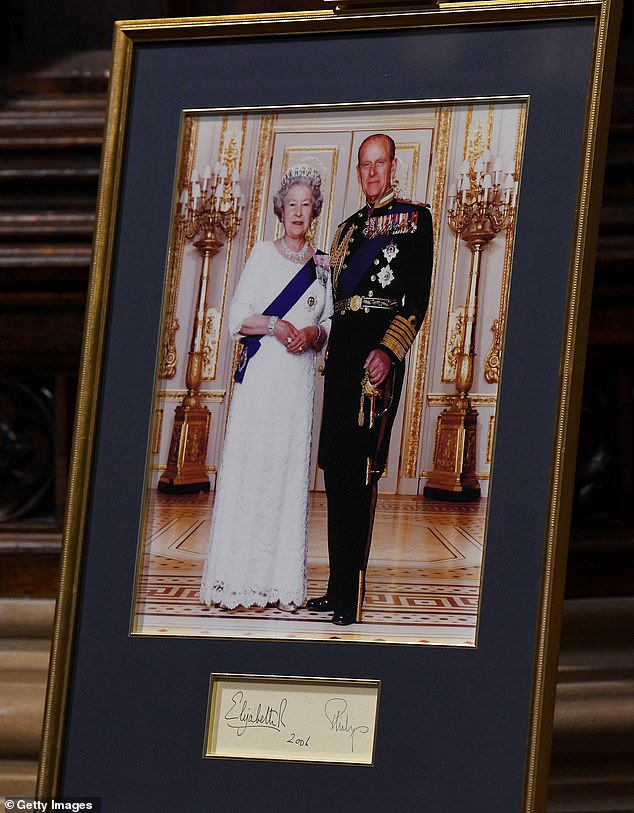 The picture of the Queen and Duke of Edinburgh, which was taken in 2012 on the occasion of the late Monarch’s Diamond Jubilee, was also displayed during a special prayer service to commemorate the death of the Prince at St Andrew’s Cathedral on April 11, 2021 in Sydney, Australia

Mourners left so many stuffed toys, as well as the character’s beloved marmalade sandwiches, amid the floral tributes that Royal Parks bosses had to urge them to stop. Prince William later said he got ‘choked up’ seeing the Paddingtons, admitting: ‘It is the things you don’t expect that get to you.’

Over the weekend, a Buckingham Palace spokesman said: ‘The teddy bears are currently being well looked after at Buckingham Palace, Clarence House and in the Royal Parks nursery in Hyde Park.’

They will be given a good bath – or more accurately a professional steam clean – before being donated to Barnado’s.

The Queen was patron of the charity from 1983 to 2016 before handing over to Camilla, who was already its president. And the Queen Consort posed with the toys in the Morning Room at Clarence House on Thursday – 64 years to the day that author Michael Bond’s first Paddington book was published.

It told of how the bear from ‘darkest Peru’ was taken in by the Brown family who found him at the London station that shares his name, carrying a battered suitcase and wearing a duffel coat with a label saying: ‘Please look after this bear.’

The late Queen had charmed TV viewers with the Jubilee sketch depicting her taking tea with Paddington at Buckingham Palace, revealing that she kept a marmalade sandwich in her handbag.